Surprise yourself with a vacation to legendary North Dakota 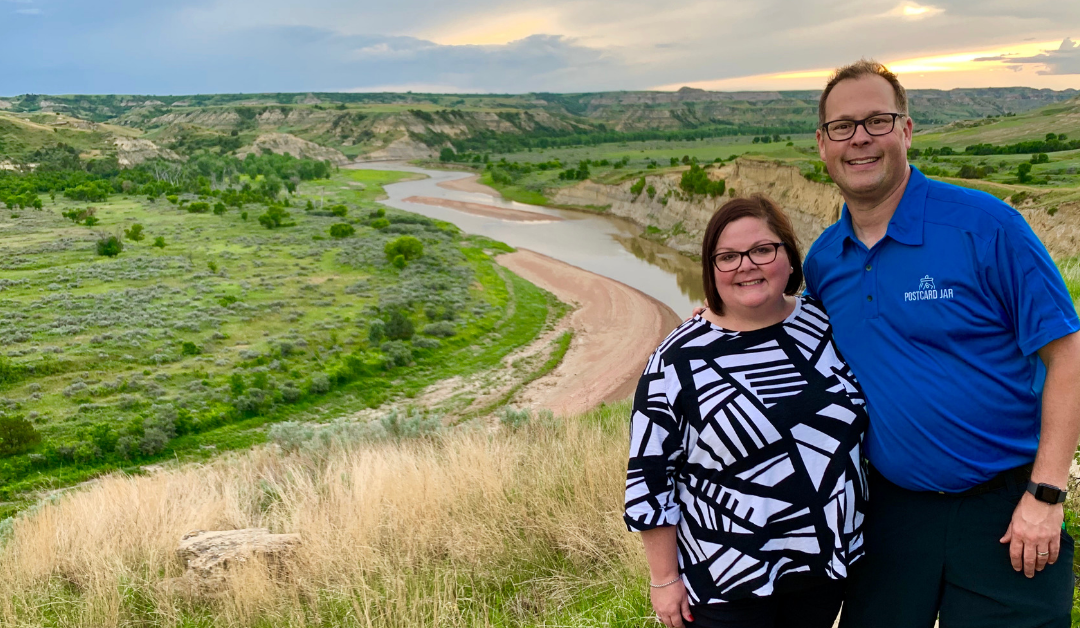 When we told people we were going on a 14-day road trip to “legendary” North Dakota, we got one of two responses: a blank stare, or a polite, “Why?” In all honesty, there was only one reason: We’d agreed to speak at a conference and that conference was in North Dakota. So, we decided to make the most of it, and drove into the state with smiles on our faces and open minds. 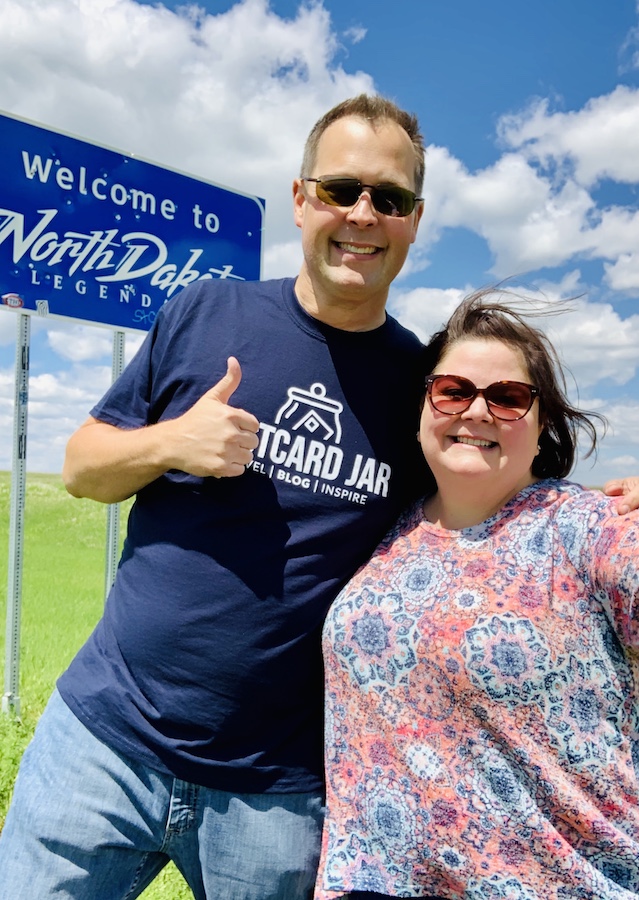 And we’re so glad we did. Because North Dakota surprised us, and in a very good way. So, throw out whatever stereotypes you have in your head about this state (often the last of the 50 people visit) because they’re likely wrong. Begin, instead, to embrace the fact that North Dakota may just be the ideal legendary summer vacation destination you’ve been looking for.

Before we go any further, we should note that parts of our trip were sponsored by North Dakota Tourism as well as several of the destinations, hotels, and restaurants mentioned. As always, the opinions expressed are our own. 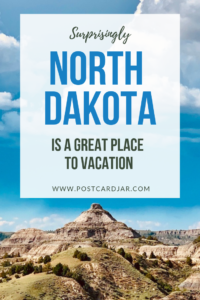 One of our biggest surprises was that North Dakota is FUN! Who would have guessed? Not us. We had expected vast tracts of boring brown prairie and a lot of serious people still angry about their cold winter. Instead, we found glorious views and a diverse population of smart, hard working, selfless, fun-to-be-around people. Fun people like North Dakotan Marlo Anderson, founder of National Day Calendar. 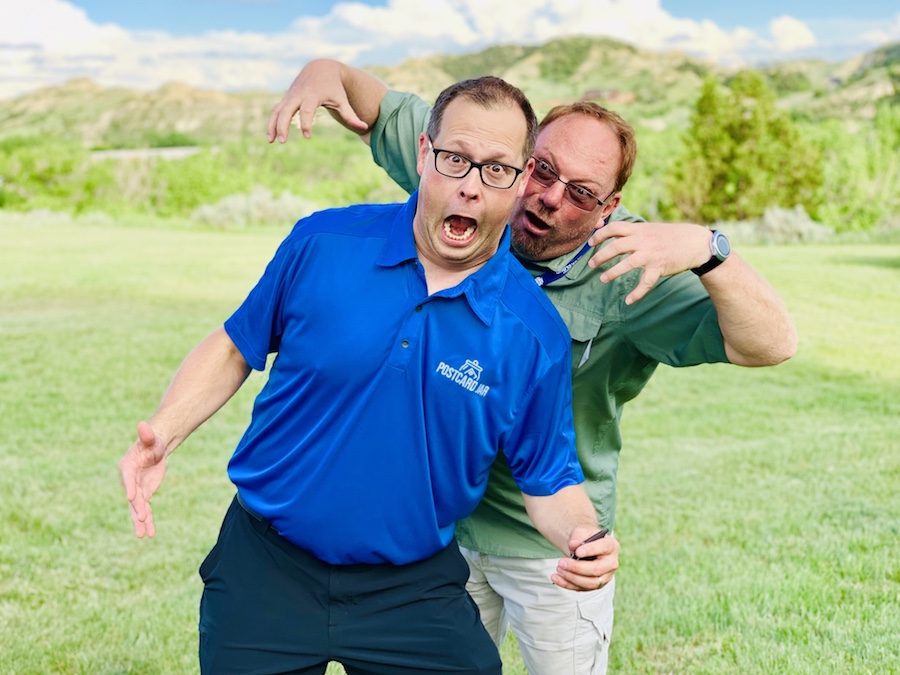 North Dakotans also have fun places to visit like Perception Medora. There, we learned a little bit about how magicians and illusionists perform their craft and tried a few illusions of our own. 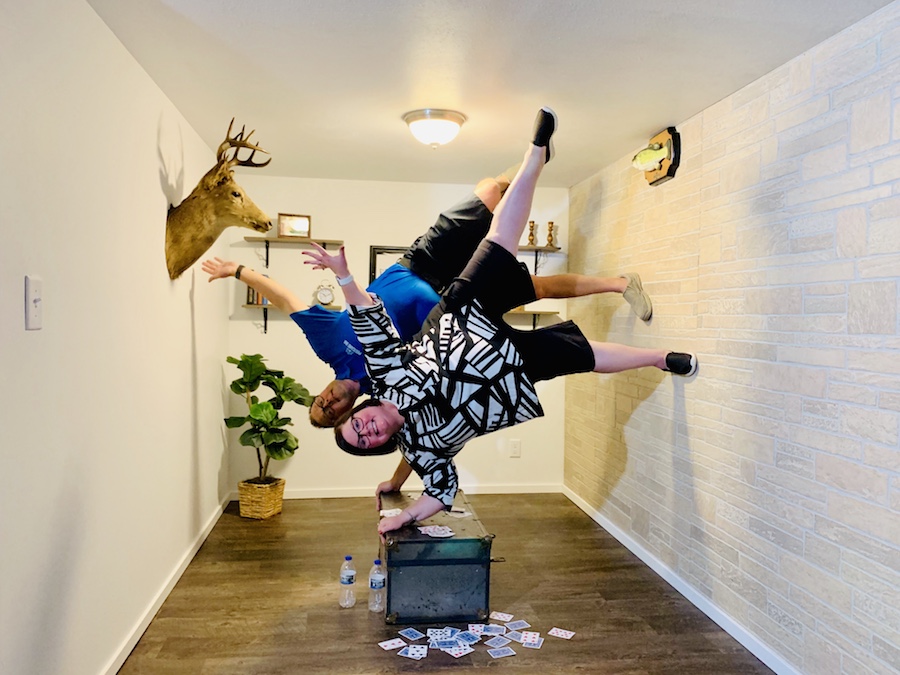 Another legendary North Dakota treasure is the state’s fascination with roadside animal art of mythic proportions. When you’re driving down the interstate and realize you can see a giant Holstein cow named Salem Sue, of course you stop to get a closer look. 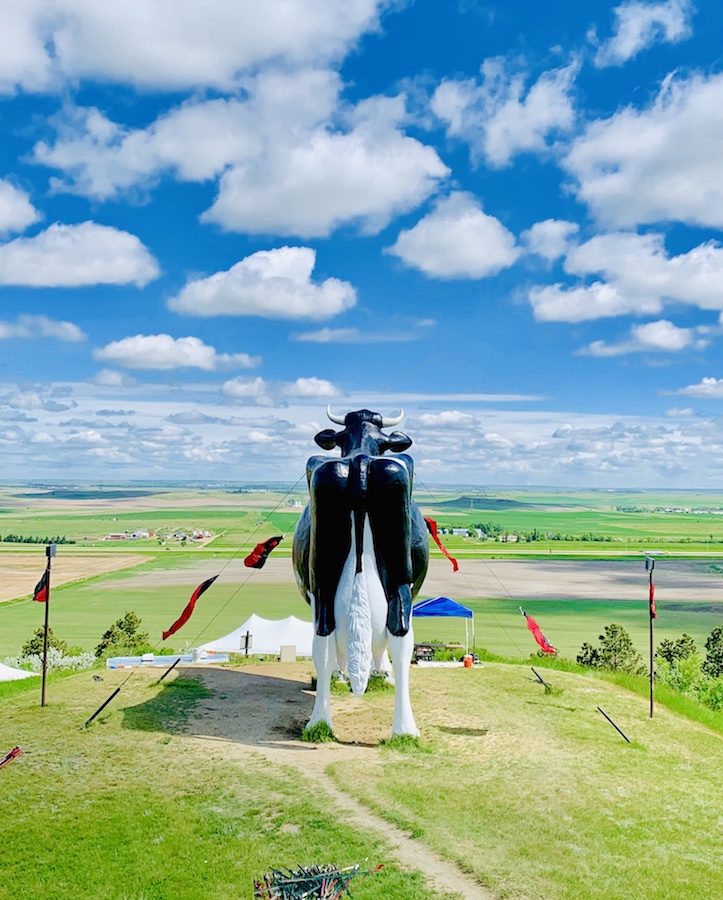 Of course, we fell in love with the landscape of North Dakota. Before going, we’d expected we’d spend a lot of time on a prairie. Instead, we were surprised to find beautiful Badlands in Theodore Roosevelt National Park, dramatic hills, and tall buttes from which we could see for miles and miles and miles. 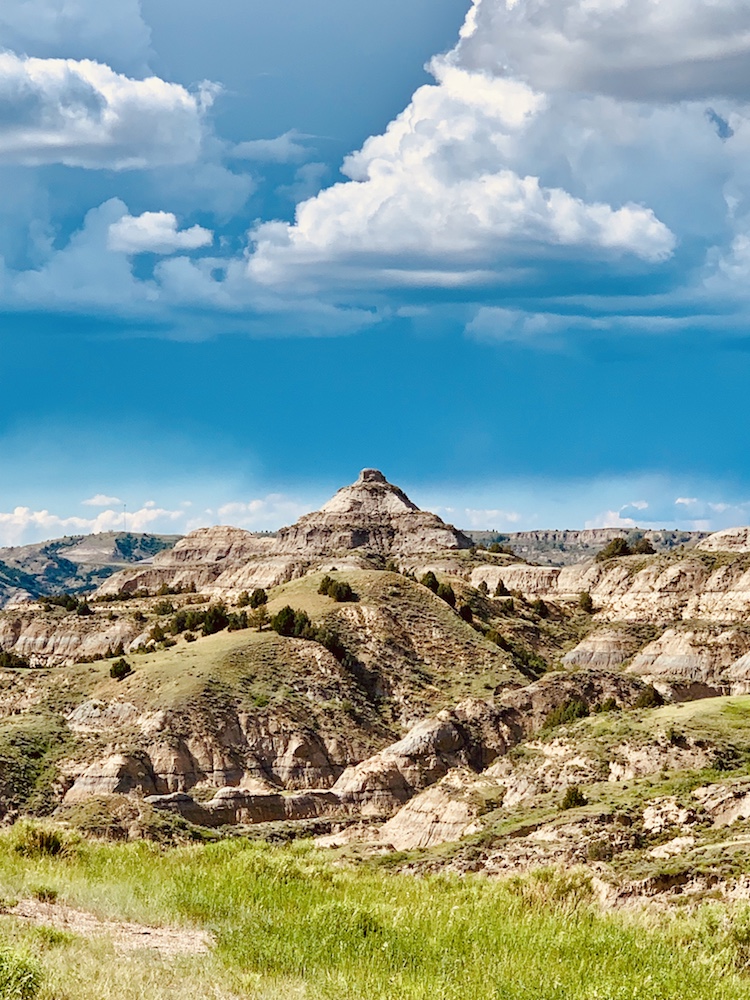 In that landscape we discovered cannonball rocks. They are large spheres of stone formed when water got in to minerals forming these “concretions.” They are slowly being exposed as the hill in which they formed erodes. 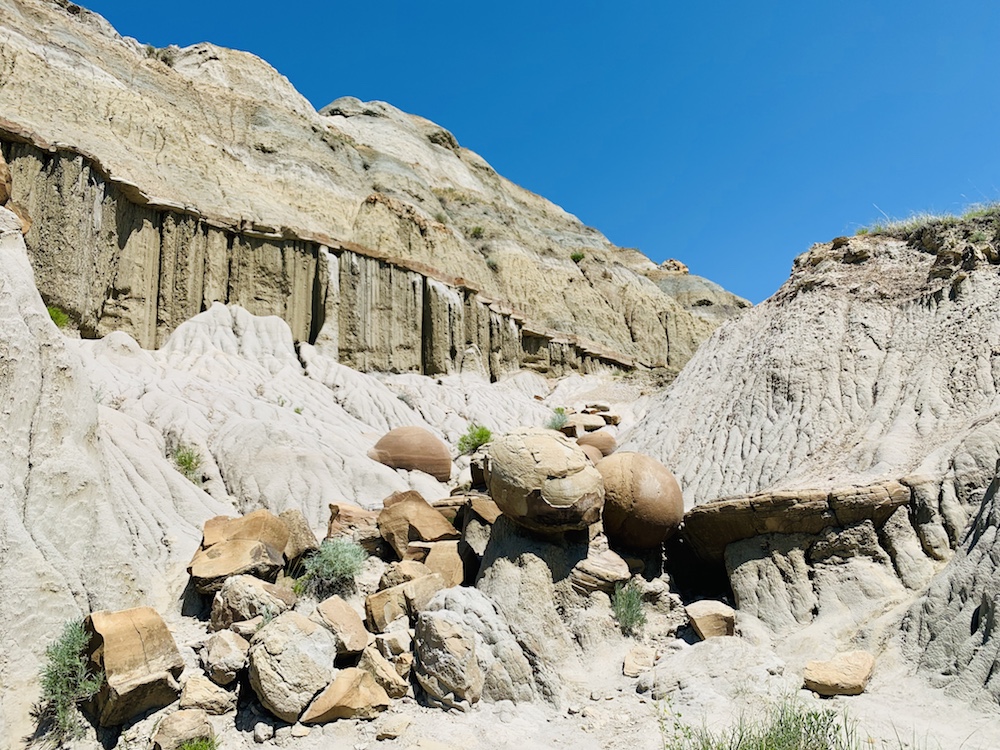 North Dakota has incredible wildlife, as well. It is a place where the deer and the antelope really do play, bison roam freely, and wild horses quietly graze with their newborn colts at their sides. 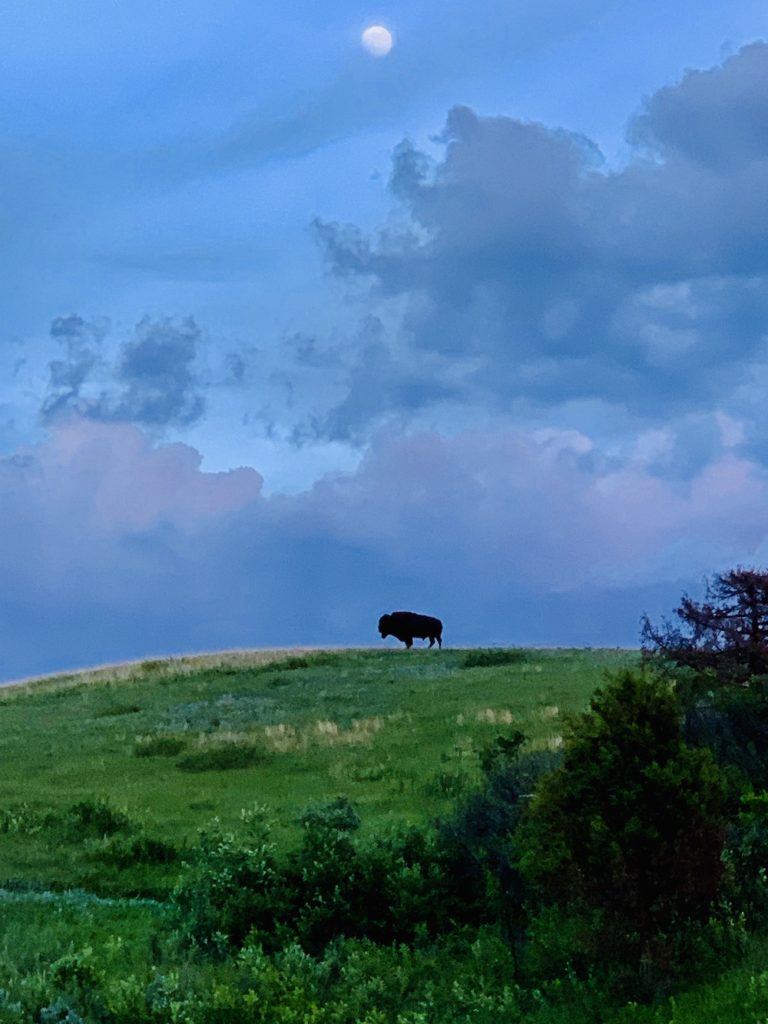 Our first culinary surprise came in Williston when we ordered fried pickles for an appetizer. They don’t just dip sliced pickles in beer batter and throw a greasy pile of fried dill chips into a basket with ranch. Instead, North Dakotans wrap a pickle spear in a slice of havarti cheese, wrap that up in a wonton wrapper, and then fry it. 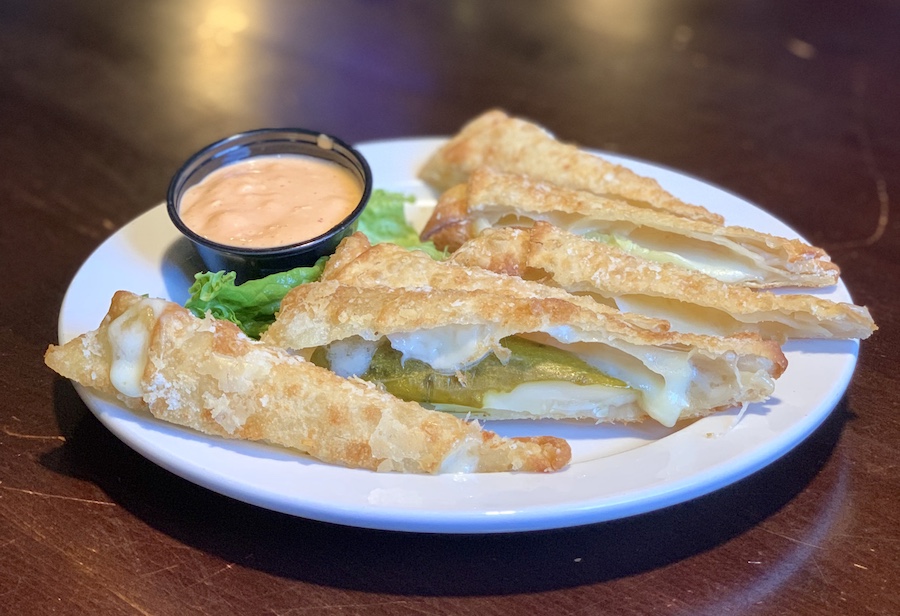 We understand that you’re skeptical of this. We were, too. But let us assure you that these pickles, when dipped in delicious spicy aioli, are really, really good.

Then, there’s the Pitchfork Steak Fondue. Before the Medora Musical we sat and enjoyed a meal featuring a steak which had been deep fried in a huge pot of oil–on a pitchfork! It’s an experience you don’t find just anywhere. 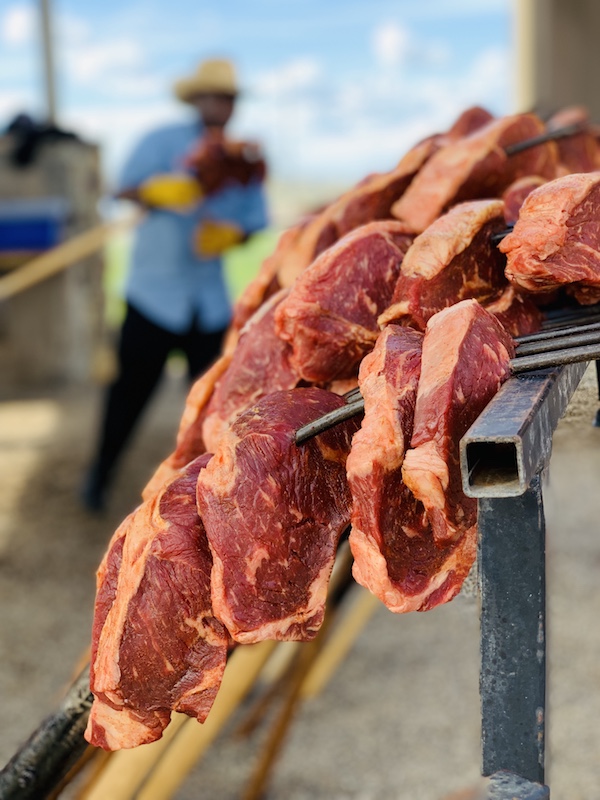 And while we’re talking delicious eats, you’ll want to try the caramel rolls and North Dakota-made Dots Pretzels. Take one bite, and you’ll know why these foods are so legendary in North Dakota.

North Dakota’s oil industry is going strong. And because of the economic boom, there are great public facilities everywhere. From pools to parks to museums, North Dakota has a real focus on quality of life for residents and visitors alike. Nowhere is this more true than in Watford City, a town with an estimated population of about 6,500 in 2017. There, they built a $100 million Rough Rider Center. 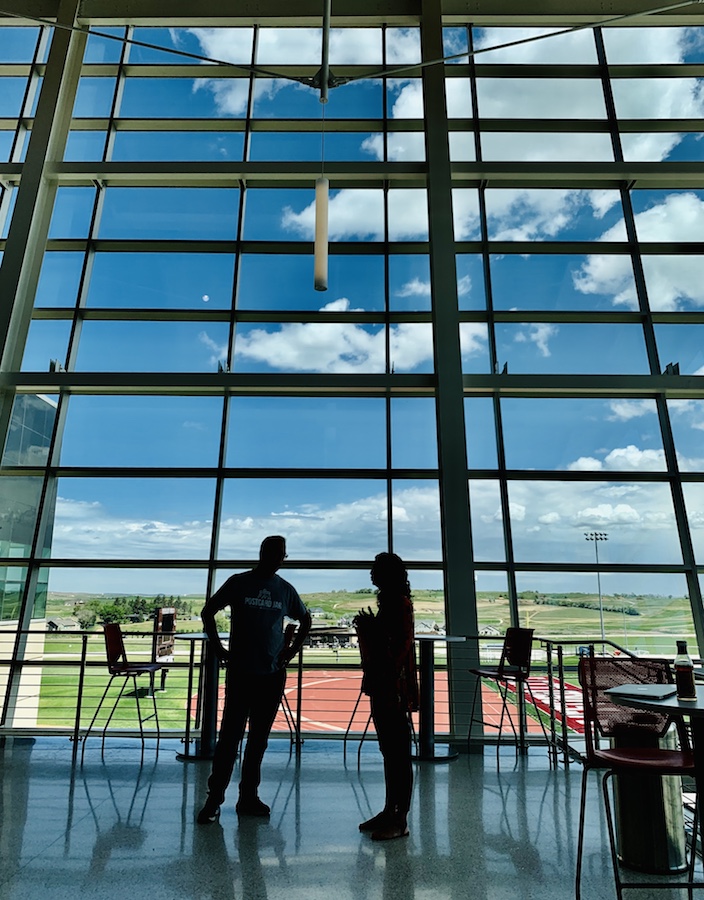 Inside we found a multi-thousand seat basketball arena, gymnastics gym, coin operated batting cages, three volleyball courts, meeting space, community art programming, indoor water park, retractable artificial turf for indoor football and soccer games. And not one but TWO full-sized sheets of ice for hockey. Is there any other small town in the country (or world) that has a space like this? Not that we’ve seen.

And then comes Medora, North Dakota’s #1 tourist destination and the host of our conference. It’s a magical little town of 132 friendly permanent residents who welcome roughly 3,000 people each and every day during the summer for the Medora Musical. Most folks would be surprised that a town this small could pull this off. But more surprising is just how well they do it. Medora is such a cute little town that you just want to squeeze it’s cheeks! 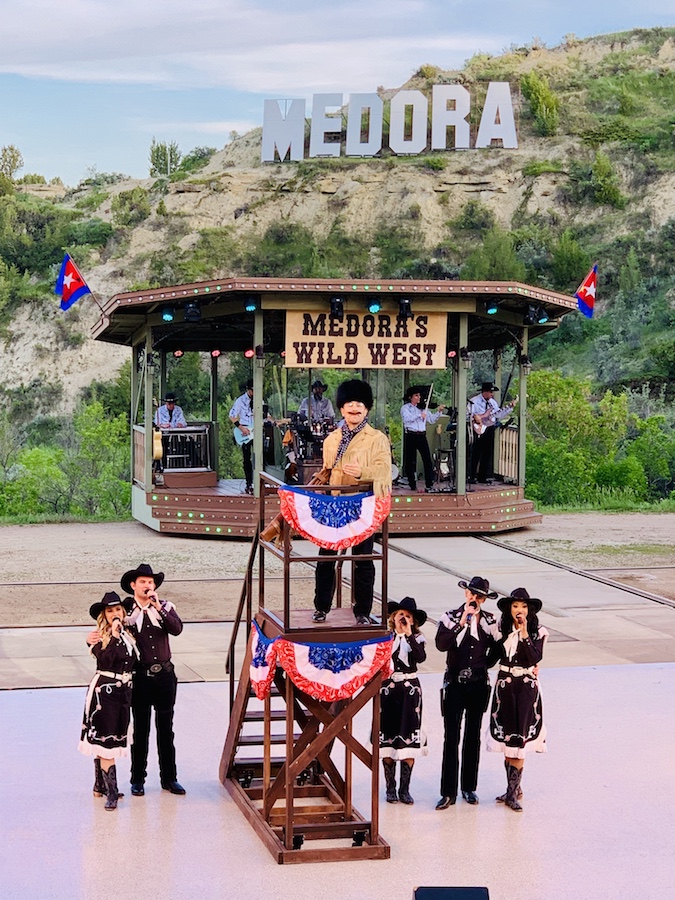 One fellow travel writer said being in Medora was like staying in Knotts Berry Farm. We’d agree, but want to add that this particular berry farm is full of some of the nicest, most open and welcoming folks we’ve met. It’s a special place that offers good food, quality drink, interesting history, a beautiful national park, great entertainment, and wholesome family fun. We can’t wait to go back.

Near Dickinson, we found the Enchanted Highway, and were, well, enchanted. It’s about a 30-mile stretch of road that connects the interstate to the town of Regent. Along the road are several HUGE metal sculptures on a scale that has to be seen to be believed. 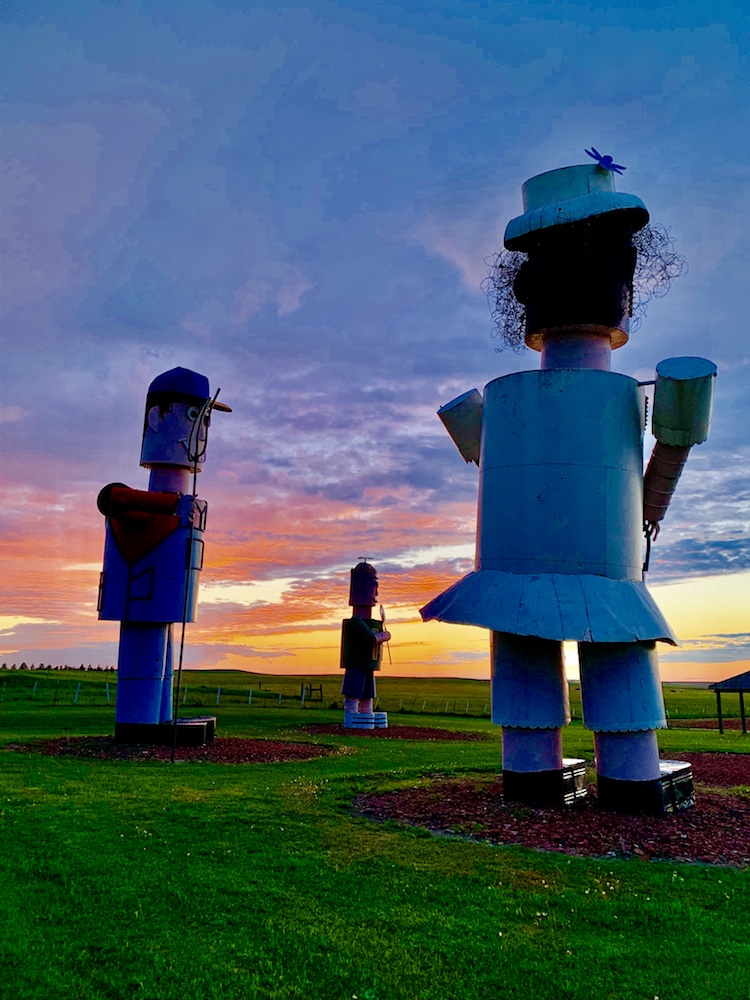 More surprising that that is that they were designed by one man who wanted to bring people to his hometown. This road left us marveling at what one person can do when they put their mind to something.

Finally, in Bismarck, we marveled at how North Dakota has worked to preserve its history and to bring it to life. We loved Ft. Abraham Lincoln State Park where Private Beck, in full Union uniform, gave us a living history tour of General Custer’s house in the year 1875. 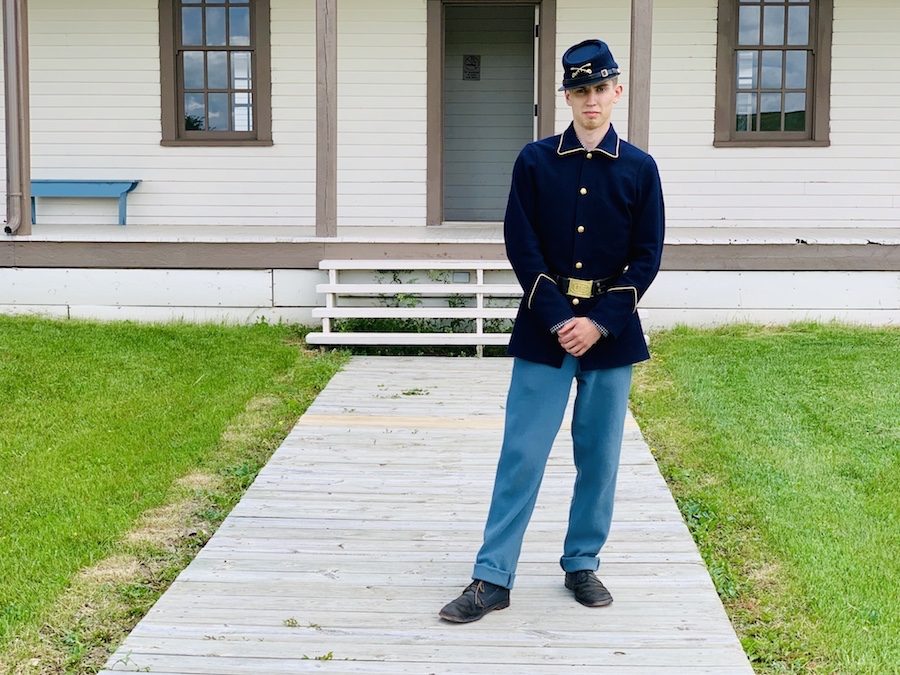 We were surprised by the Smithsonian-like quality of the North Dakota Heritage Center and State Museum. A visit to this museum costs nothing but visitors get a thorough look at the history of the state from before the time that dinosaurs roamed the Earth to the present day. The museum took special care to honor and respect Native Americans, their history and culture. After all, they are integral to North Dakota’s history. 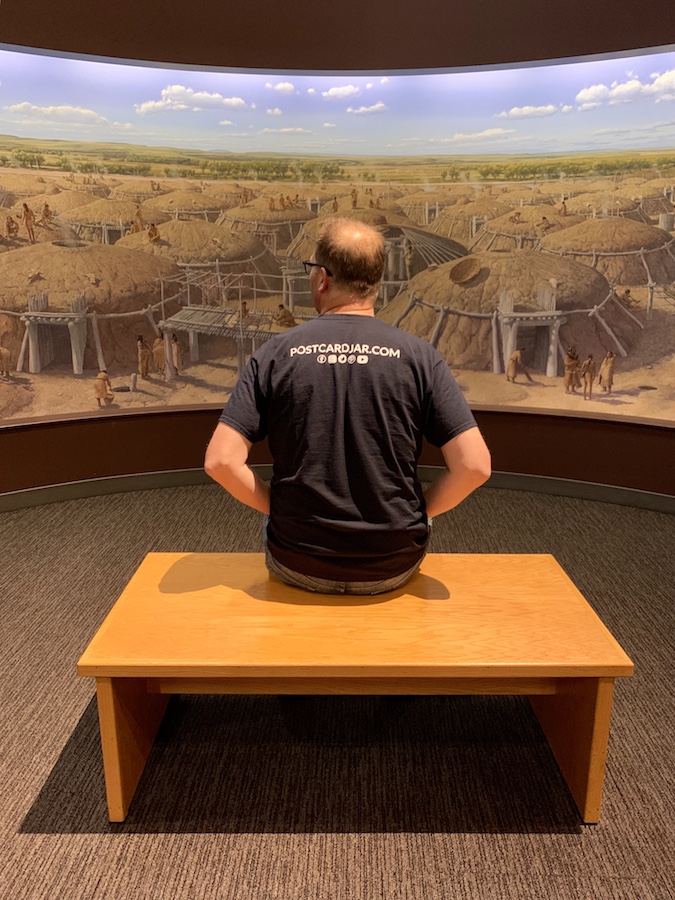 We also had several opportunities to see and learn about Native earth lodges at places like MHA Nation’s Earth Lodge Village and On-A-Slant Village. 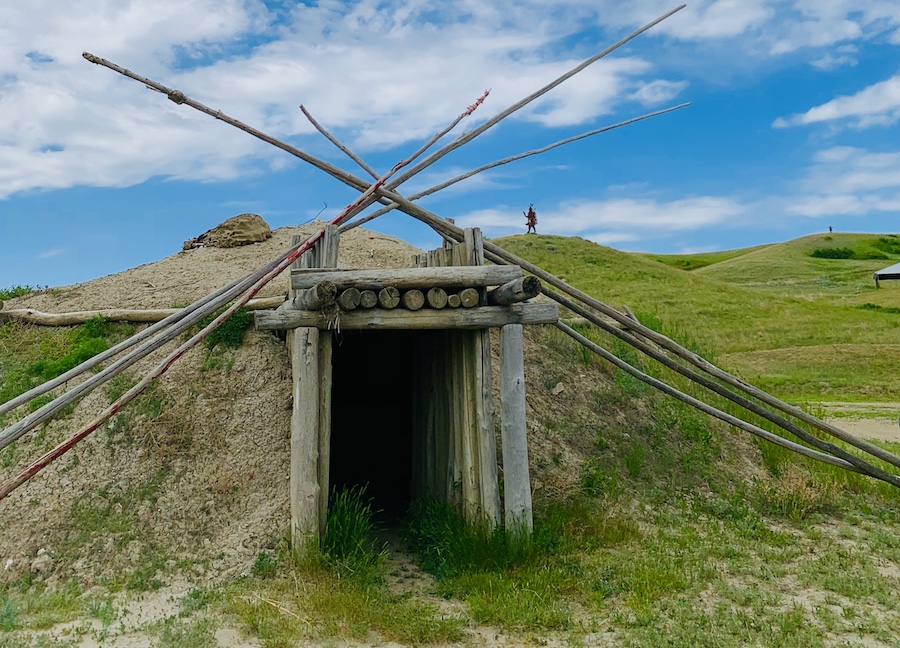 Everyone drives a truck

One more surprise. Almost everyone drives a truck, at least in the western part of the state. We took the photo below from a window at the Roosevelt Inn and Suites when we noticed a parking lot full of pickups. We went days in North Dakota before we saw a single Prius. Of course when we did see one, the license plate said Idaho. 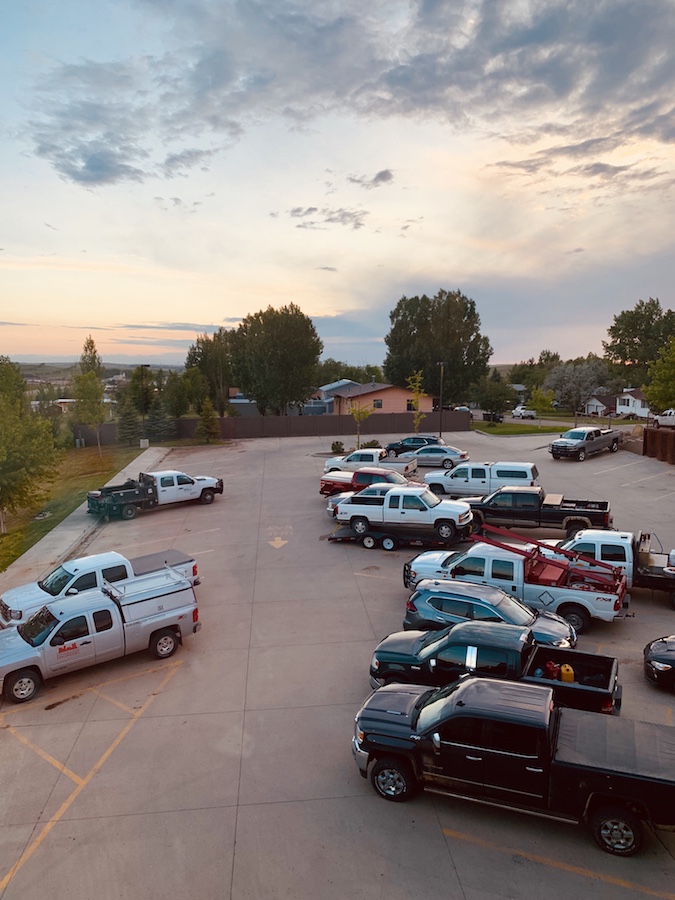 Perhaps the thing that surprised us most is that North Dakota was just so darned easy. It was easy to get around and easy to park, easy to get a table at a restaurant and easy to find good food. It easy to talk to people and easy to see and experience new things. And best of all, it can be easy on your budget.

We’ll be writing in more detail about our trip to North Dakota later on and we’re already making plans to go back again. We assure you, it’s gonna be legendary.