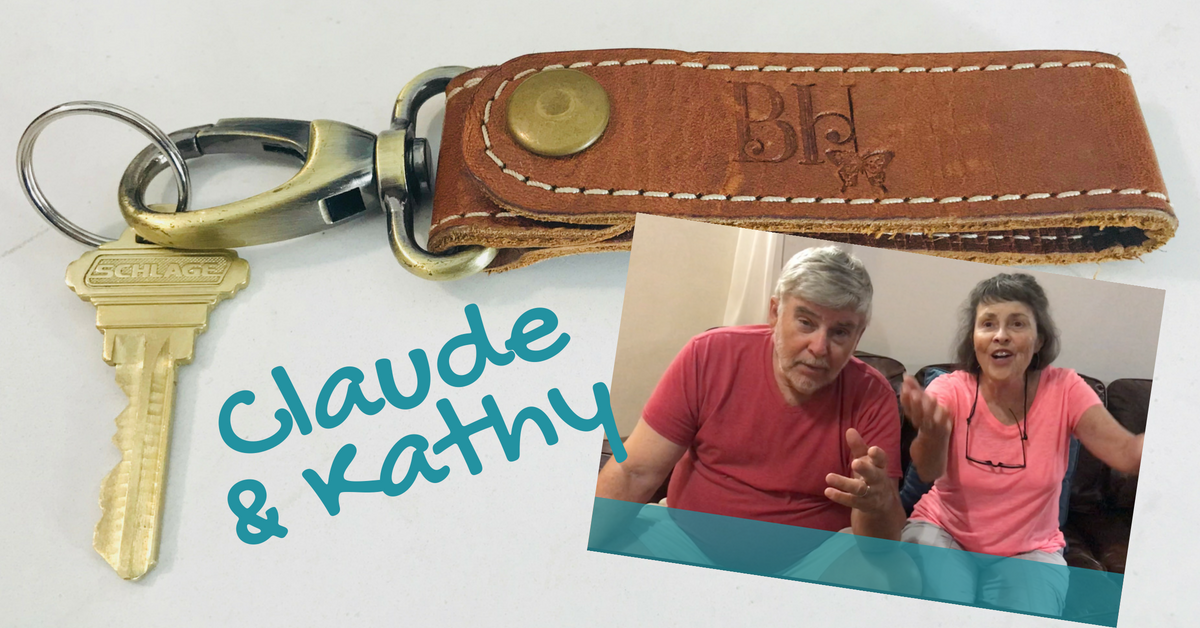 If you like The Pioneer Woman, or have ever dreamed of spending a night at her new Boarding House in Pawhuska, Oklahoma, you have got to see this video.

Now, here’s how we met this adorable couple.

Earlier this week, we made an impromptu trip back to one of our favorite places, Pawhuska, Oklahoma. As you may know, Pawhuska is a small town so word typically travels fast there. We’d only been in town a few hours when someone mentioned that there might be a few rooms available at new The Pioneer Woman Boarding House for that night due to a last-minute cancellation. 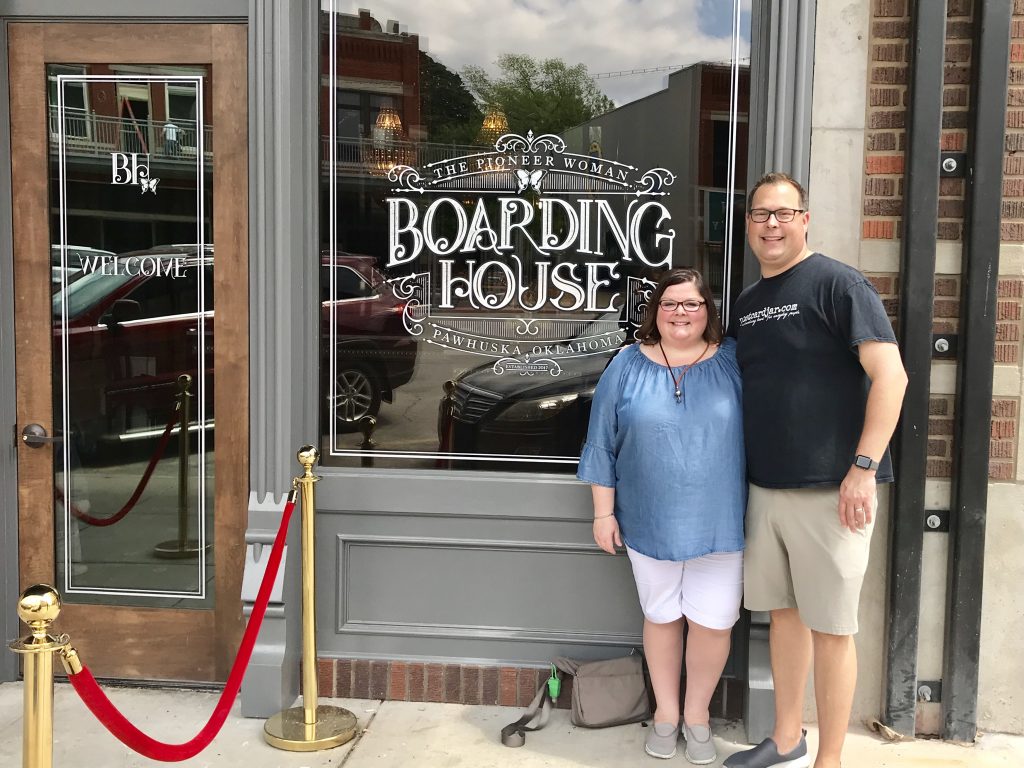 We were super excited to get a room at the boarding house on a recent visit to Pawhuska.

Now, you should know that when this cowboy luxury hotel opened for reservations this spring, they booked every room available (for months in advance) in about an hour. From the moment it was announced, Pioneer Woman fans from all over the world anxiously awaited the opening of the Food Network star’s new boutique hotel. Since opening, reservations there have been nearly impossible to get. Take a look at this picture from The Tack Room and you’ll see why. 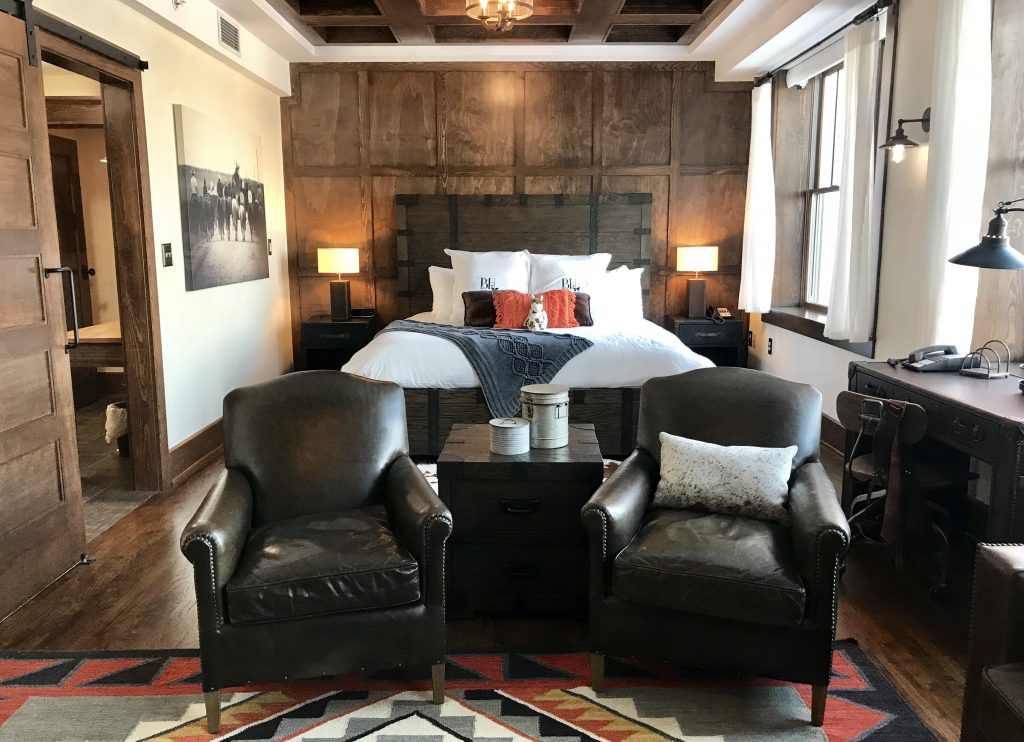 The Tack Room at The Pioneer Woman Boarding House.

So when we called someone at The Boarding House Monday afternoon and discovered that a few rooms had indeed unexpectedly become available for that night, we jumped on it before they were booked. We arrived at the front desk in about four minutes (you can do that in a town the size of Pawhuska). We were so excited for the rare opportunity to check in and enjoy one of the eight luxurious, themed rooms. 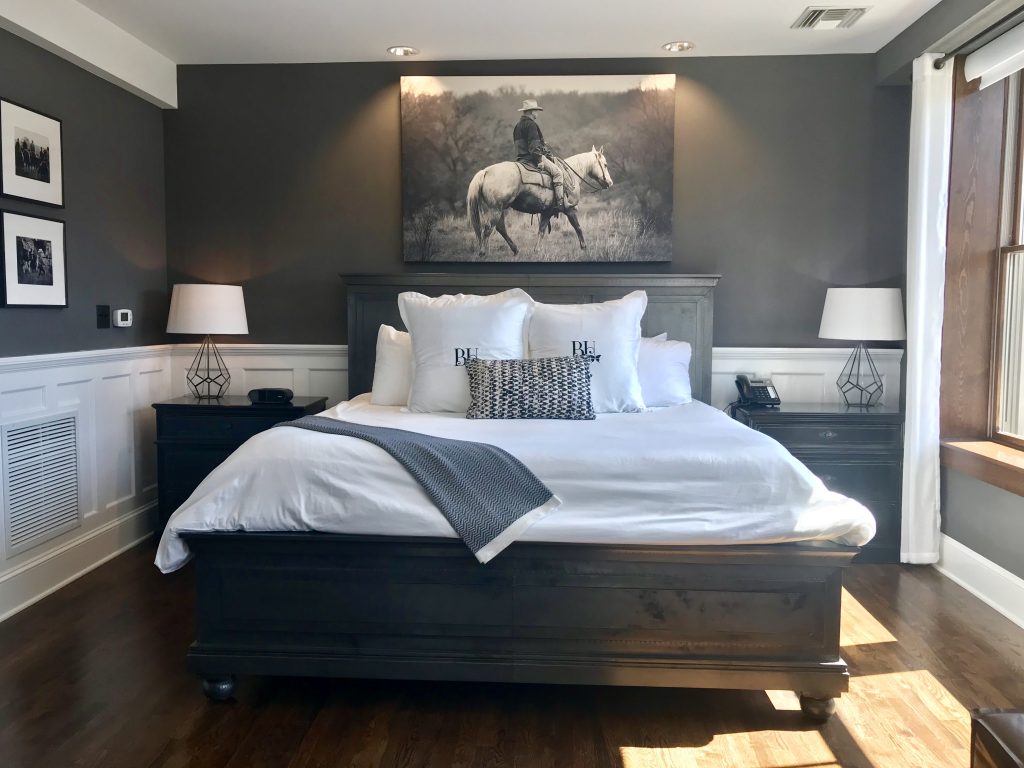 Like all beds in the PW Boarding house, the bed in the Photograph Room is king-sized, has a Tempurpedic mattress and amazing bedding. If you’re anything like us, you’ll sleep well.

We unpacked our suitcase in The Photograph Room, which was beautifully decorated with white wainescoting, charcoal gray walls, and photographs taken by Ree Drummond herself. 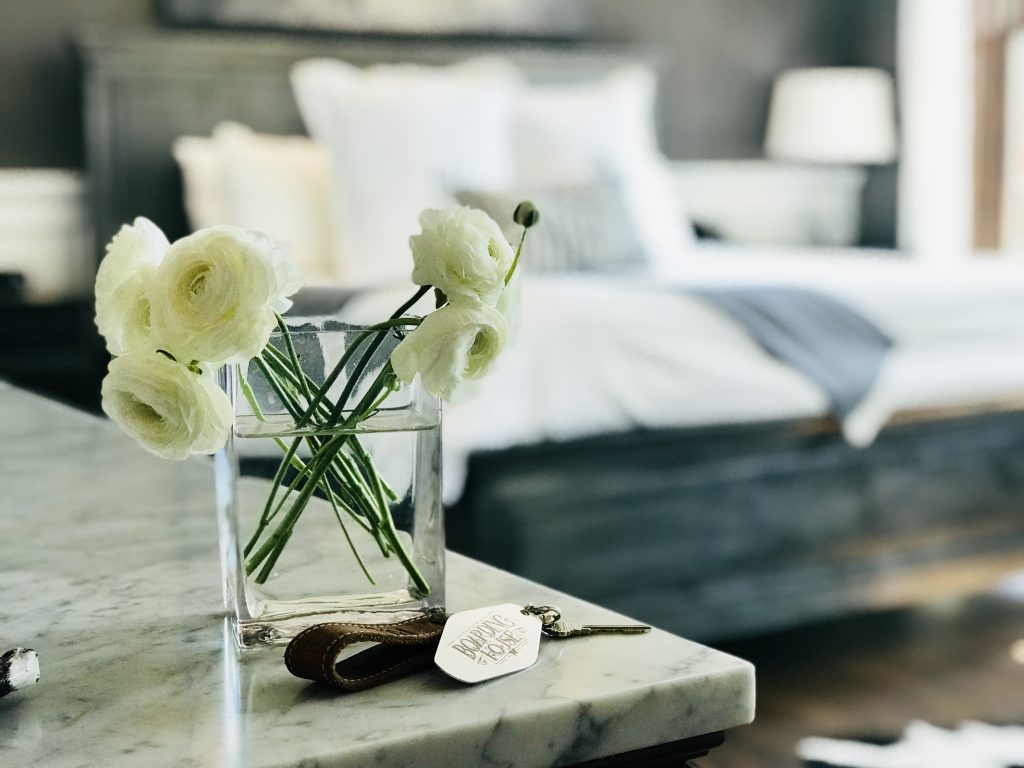 There are always fresh flowers in every room at the PW Boarding House. 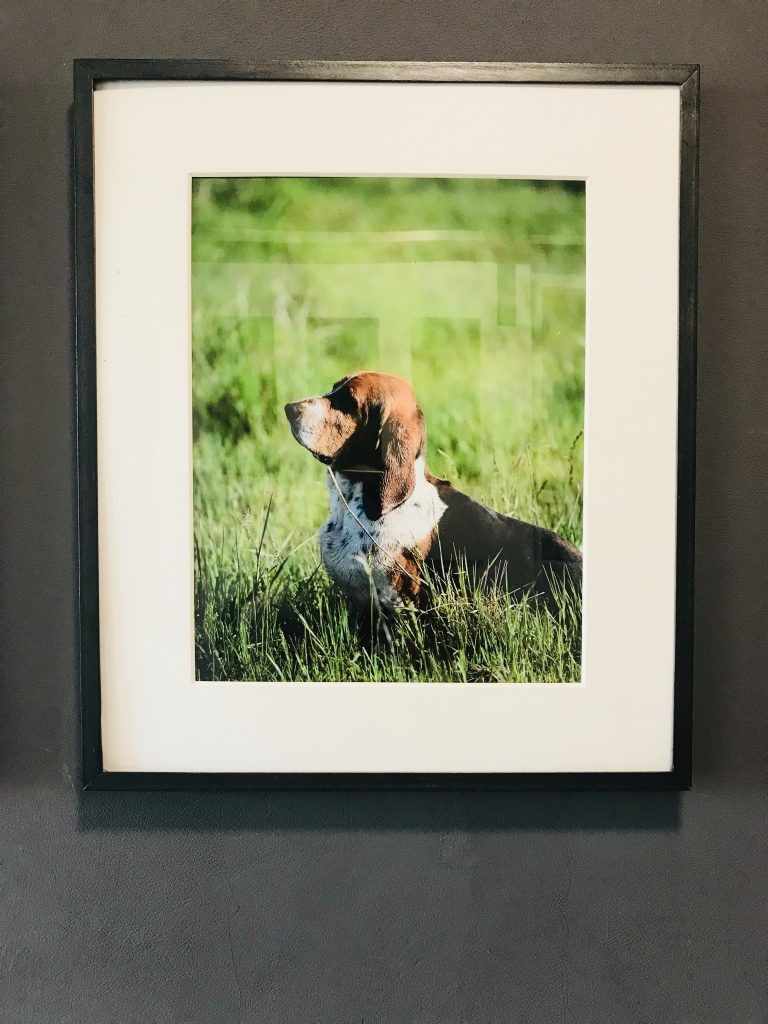 A picture of one of the Drummonds’ beloved dogs in the Photograph Room.

A little after 5 p.m., we joined a few other guests for complimentary wine and cheese in a common area and got to talking about anniversaries and what brought each of us through Pawhuska. 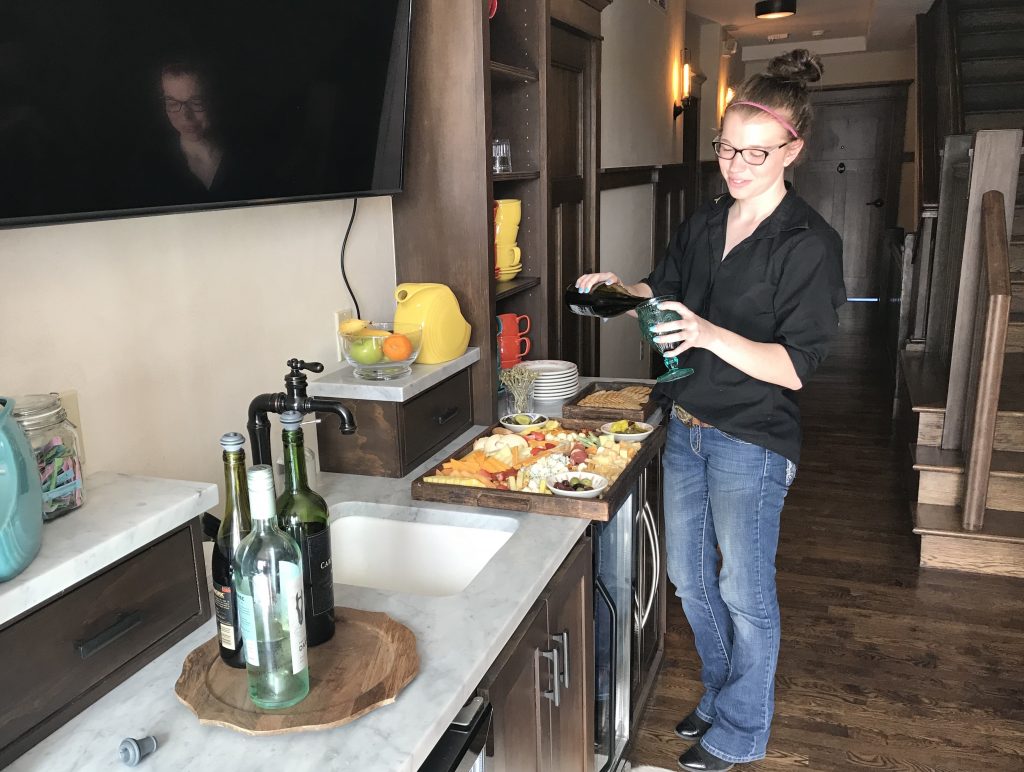 Jessye pours wine during the social hour at the PW Boarding House.

One couple from Oklahoma was celebrating their 40th wedding anniversary while our soon-to-be friends Claude and Kathy were there to learn more about Osage history after reading the book, “Killers of the Flower Moon” by David Grann.

After having supper at the newly opened P. Town Pizza (you must have the Not Knots if you go), we went back to the hotel where ran into Claude and Kathy again outside on the balcony overlooking Kihekah Avenue. 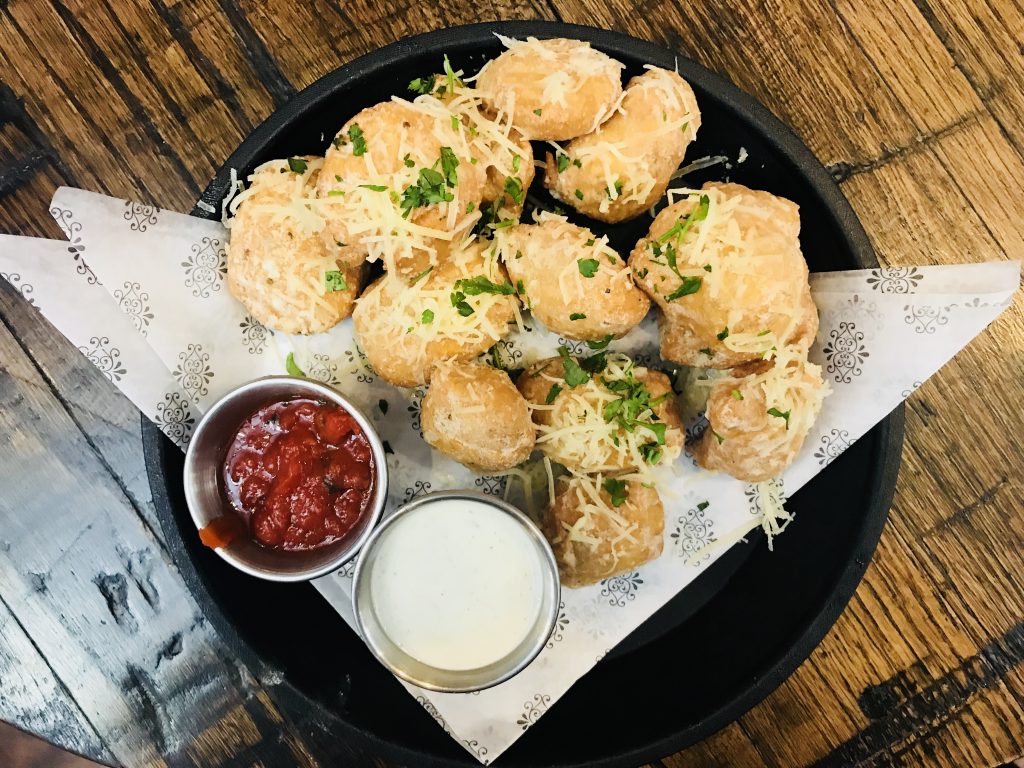 The menu at P-Town pizza calls the Not Knots “life changing.” After trying these savory morsels, it’s safe to say the menu is correct. These are the stuff dreams are made of.

It was then that we learned more about how they came to stay at The Boarding House that night, despite knowing little about Ree Drummond or having ever watched even one episode of The Pioneer Woman’s popular TV show!

Claude and Kathy were a hoot. We ended up showing them around The Photograph Room and they invited us to see The Prairie Room in which they were staying. 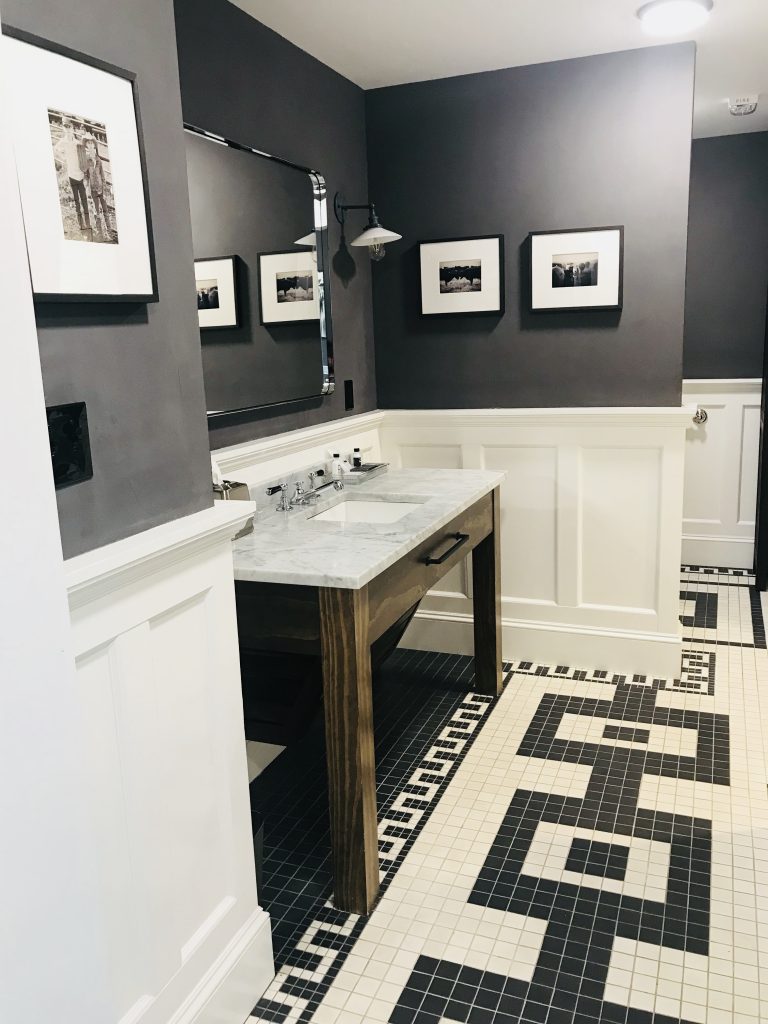 The bathroom in the Photograph Room has beautiful black and white tile.

We got such a kick out of this couple who was married 50 years ago on the same day of the year as we were – August 27! Their story and lively personalities were just too good not to share, and they happily agreed to allow us to interview them on video.

We hope you enjoyed their uplifting story as much as we did. It certainly made for a memorable stay for all of us. 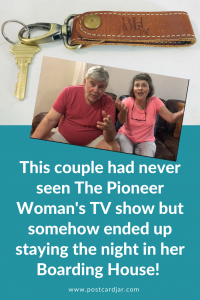