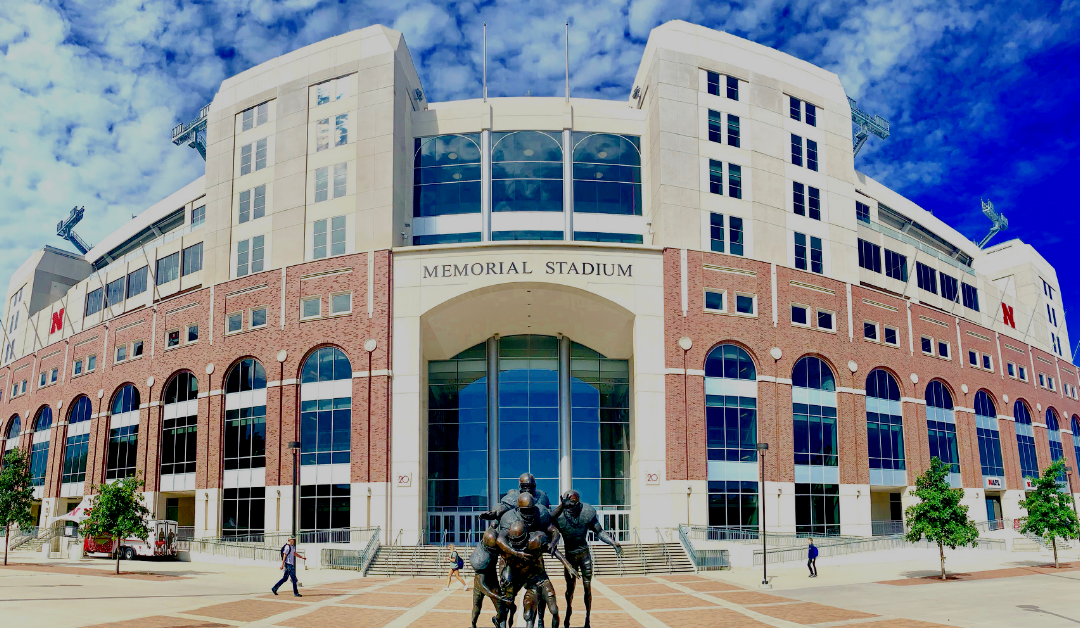 Memorial Stadium tours at Nebraska are available to the public free of charge. Here’s what to expect when you tour Memorial Stadium in Lincoln, Neb. To book a free experience, you just need to register online to reserve a spot.

We’d been to lots of Nebraska Cornhusker Football games over the years. However, we didn’t actually tour the stadium until 2019. It turns out, there’s quite a bit to see. 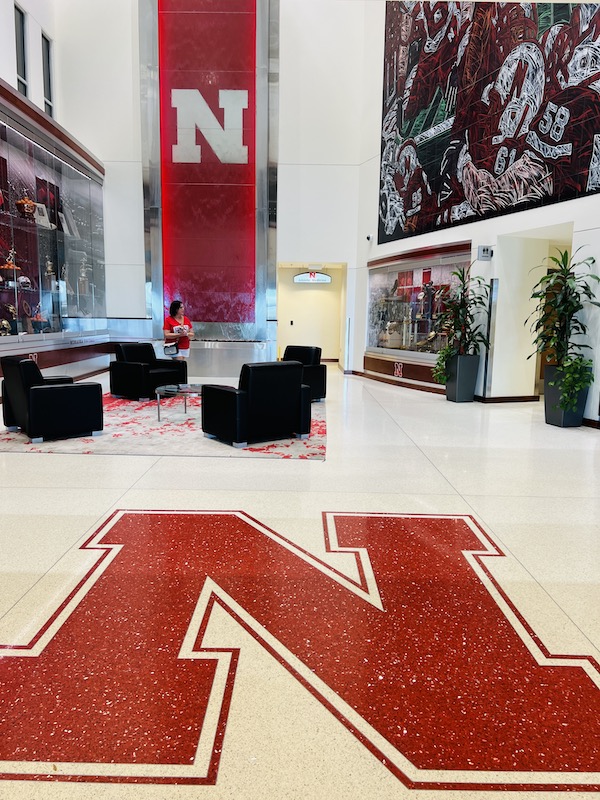 We learned so much about our team and its history on a guided Memorial Stadium in Nebraska tour. As life long Husker fans, we wish we’d taken advantage of this opportunity sooner. 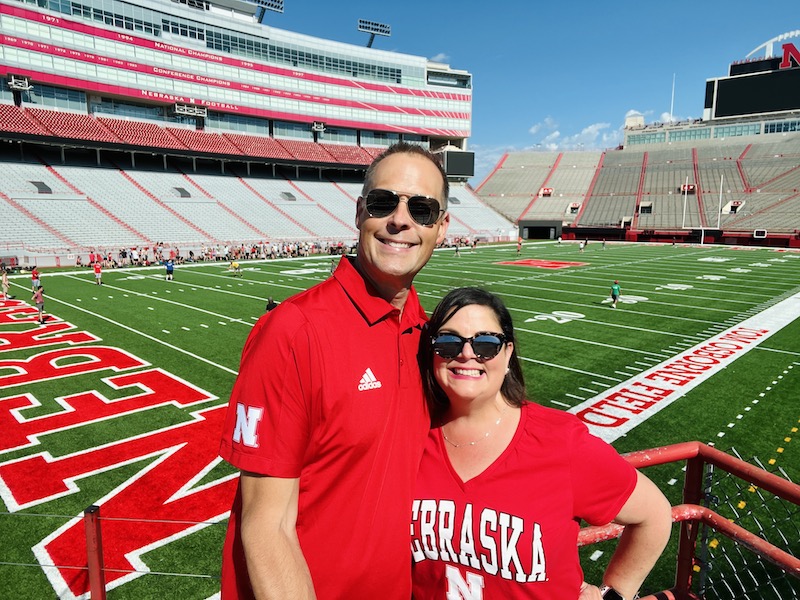 The University of Nebraska offers complimentary guided tours throughout the week. Each year, about 30,000 people take a Memorial Stadium tour, half of them school children.  Here’s what you should expect (and watch for) on a guided tour. 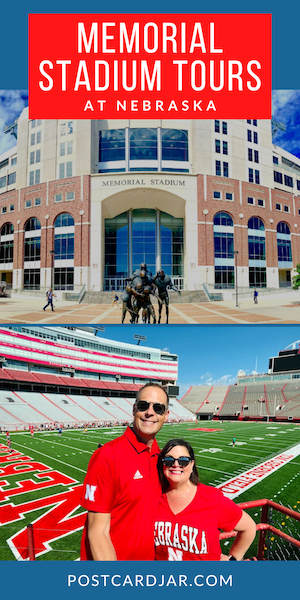 Parking is limited around the stadium, even on non-game days. There is a metered lot just south of the stadium where you can park. You may also use a parking garage across the street from the West Stadium. After parking, head to the Traditions Lobby in the Osborne Athletic Complex, located in the North Stadium to check in. Be sure to register online to reserve a spot if you want a guided Memorial Stadium tour. 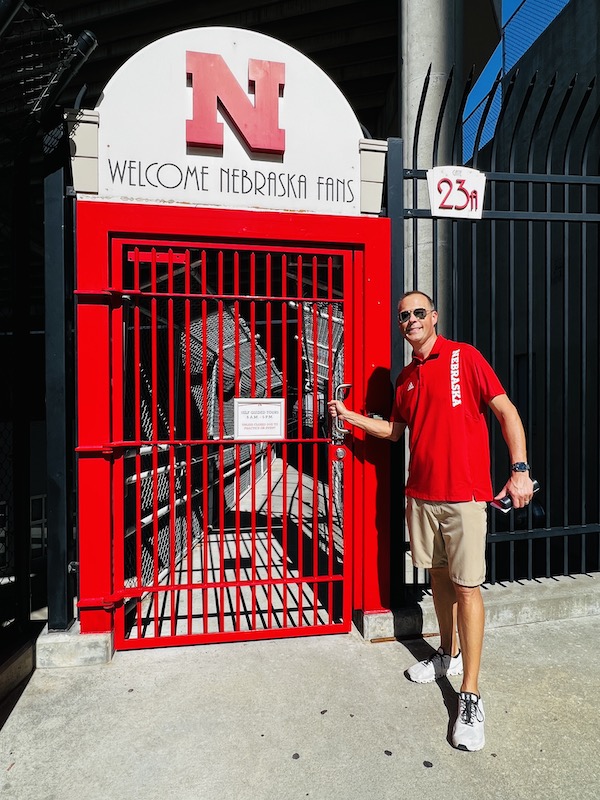 If you’d rather do a self-guided Memorial Stadium tour, you may go seven days a week, excluding game days, from 8 a.m. to 5 p.m. Keep in mind that you won’t get to see some of the sights included in the guided tour if you do one on your own. To get a glimpse of Tom Osborne Field, go through gate 23A on the southeast corner of the stadium. Note that the access to the field area is closed when the Huskers or their opponents are practicing or if there’s a special event. 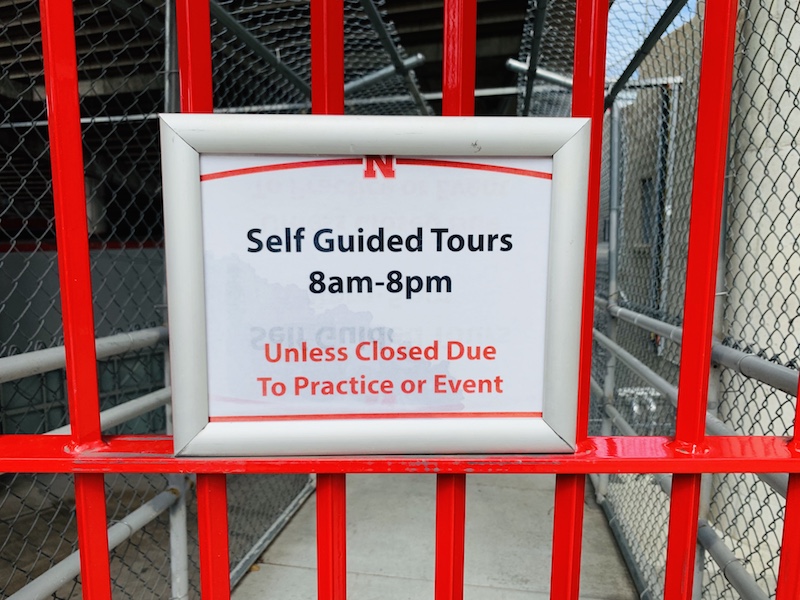 Self-guided tours do include the north and west stadium lobbies. The north lobby features all of the Husker trophies and lots of memorabilia. You can also watch videos on an interactive touch monitor in the north lobby. 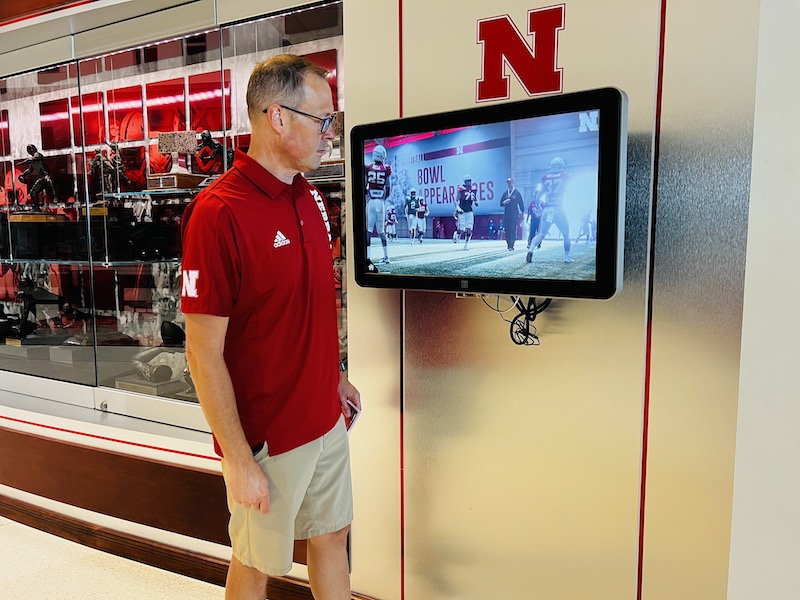 The west lobby showcases Nebraska’s academic and All-American award winners. While the Huskers lead the nation in Academic All-Americans (Division 1), it will only take about three minutes for you to see and read everything there. 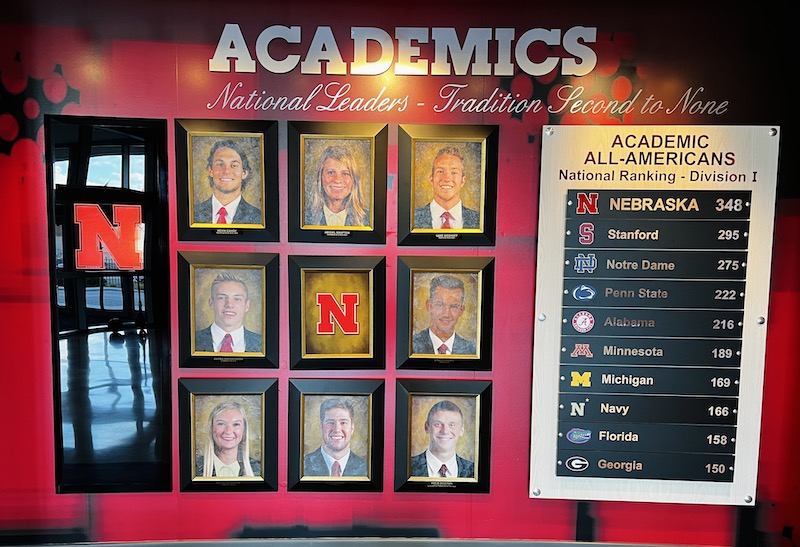 The most photographed spots on campus

On our Memorial Stadium tour, we learned that the stadium becomes the third largest population center in Nebraska on game day. With a capacity of nearly 90,000, only Omaha and Lincoln have more people at game time. Memorial Stadium has plenty of visitors throughout the year, as well. It is so popular that our guide told us at the beginning of our tour that the two most photographed places on campus are at the stadium. The number one photo op is the “Legacy Statue” on the east side of the stadium outside Gate 20. 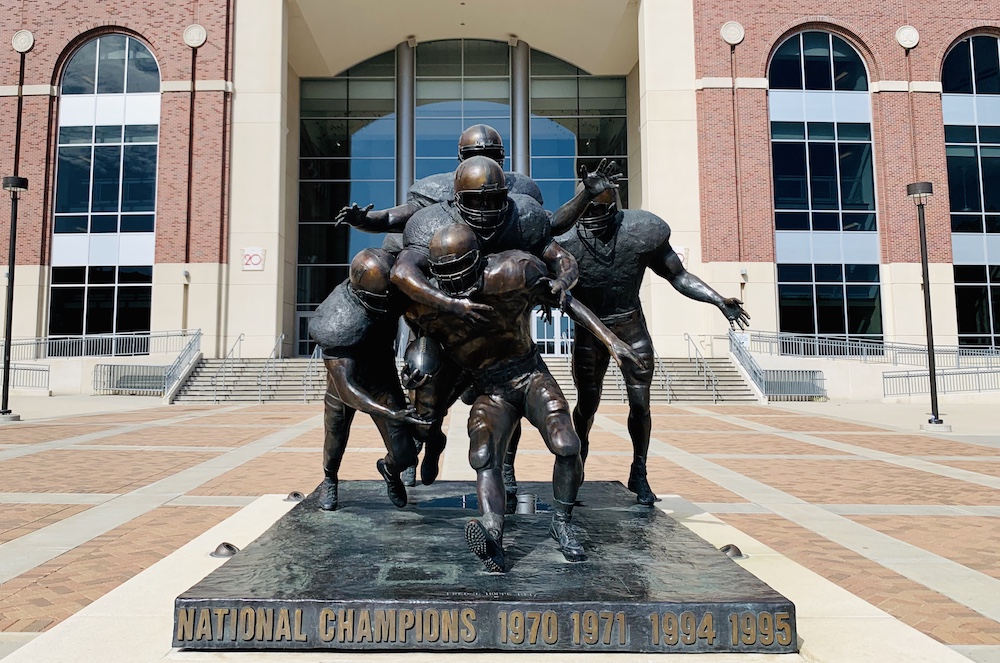 Created by artist Fred Hoppe, it commemorates Nebraska’s five national championships. It also portrays five Husker defensive players tackling a ball carrier. The second most popular place for taking photos? A statue of former Nebraska Head Football Coach Tom Osborne standing alongside former quarterback, Brook Berringer. Our guide told us a humble coach Osborne initially did not want a statue of himself placed there. However, after seeing a sketch of himself coaching the late Brook Berringer, Osborne agreed. We’re so glad he did. Berringer tragically died in a plane crash right after his senior season when Osborne was coach. 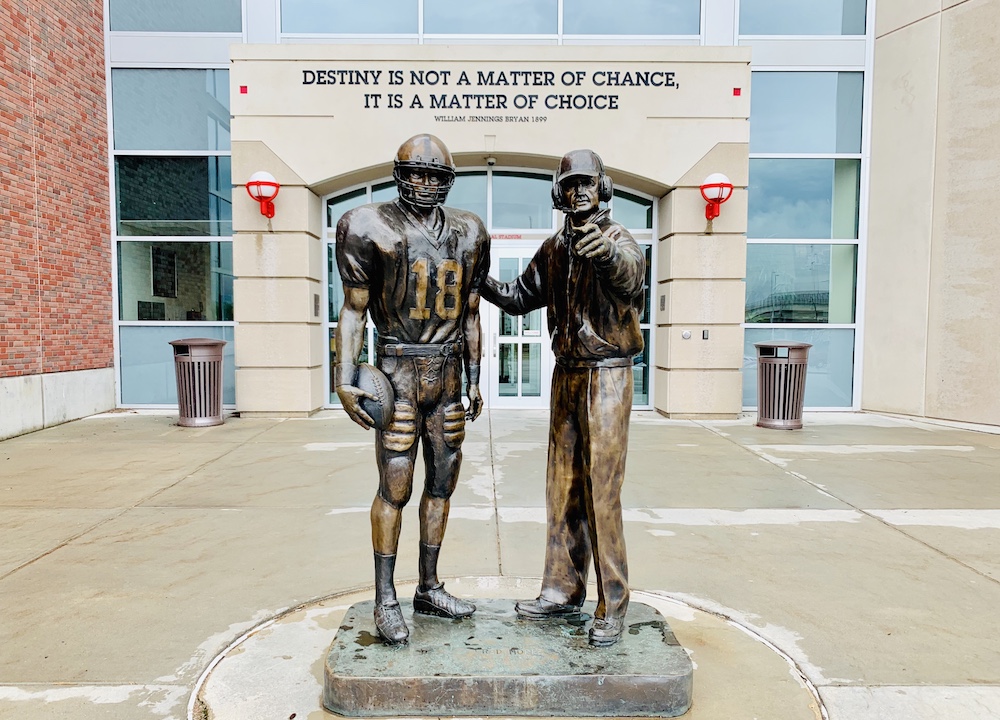 We’re pretty sure a third statue, one of of former Husker coach Bob Devaney near Gate 20 on the east side, gets a lot of snaps, too. 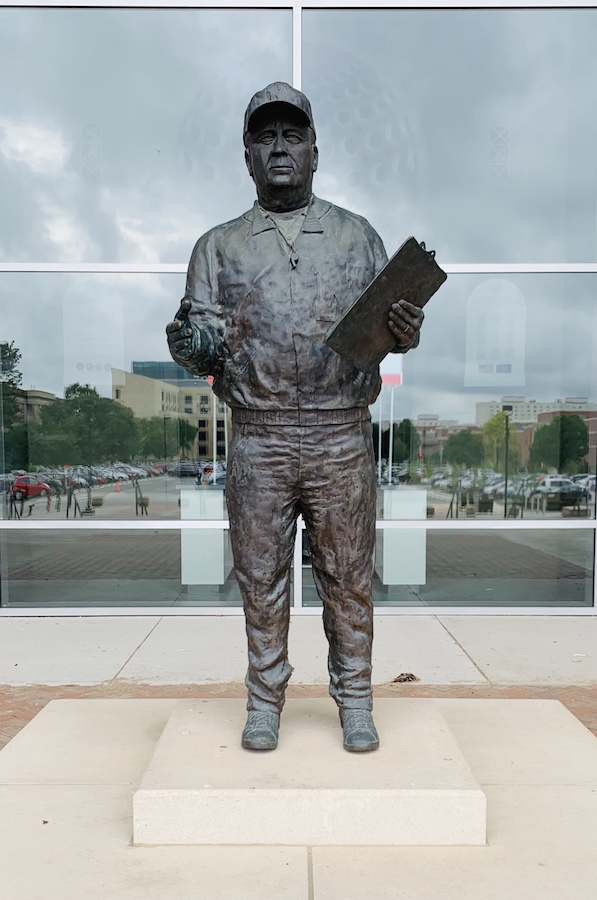 Once inside the doors of the Traditions Lobby, you’ll see a display with Nebraska’s five national championship trophies. The Huskers won NCAA Division I championships in 1970, 1971, 1994, 1995, and 1997. The four most recent trophies include footballs made from Waterford Crystal. We want to emphasize that Nebraska’s footballs (which are not permanently attached to the trophies) have never been dropped. But our guide did share with us a story about the father of an Alabama player who fumbled one of theirs. The football dropped to the ground and shattered into pieces.

It turns out, a replacement crystal football costs $35,000. But someone in Alabama had a good idea. They picked up the pieces and sold them individually to fans for upwards of $50,000 – more than enough for a new crystal football and then some.

There’s more than one Heisman trophy each year

We learned on Memorial Stadium tours at Nebraska that when a player wins the Heisman trophy, there are actually three awarded. The first goes to the player, the second stays in New York City, and the third goes to the player’s university. Just across from the National Championship trophies in lobby you can see three Heisman Trophies. They were won by Johnny “The Jet” Rogers (1972), Mike Rozier (1983), and Eric Crouch (2001). Only four schools have had more Heisman Trophy winners. They are all enclosed in a glass case near the staircase, so getting a good picture of them is not easy. 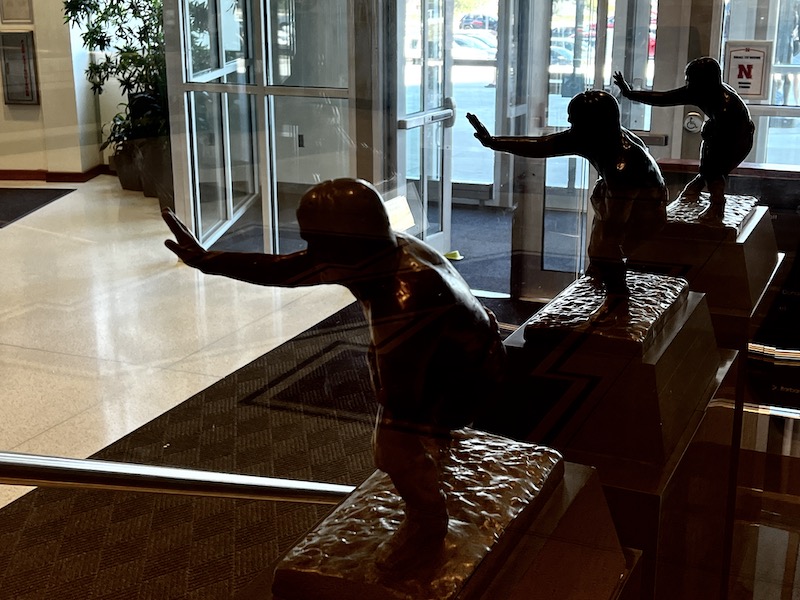 The Traditions Lobby is chock full of Huskers memorabilia. There are bowl game trophies, conference championship plaques, and newspaper clippings from many of the greatest moments in Husker football history. Be sure to look for the world’s longest telegram on display there. 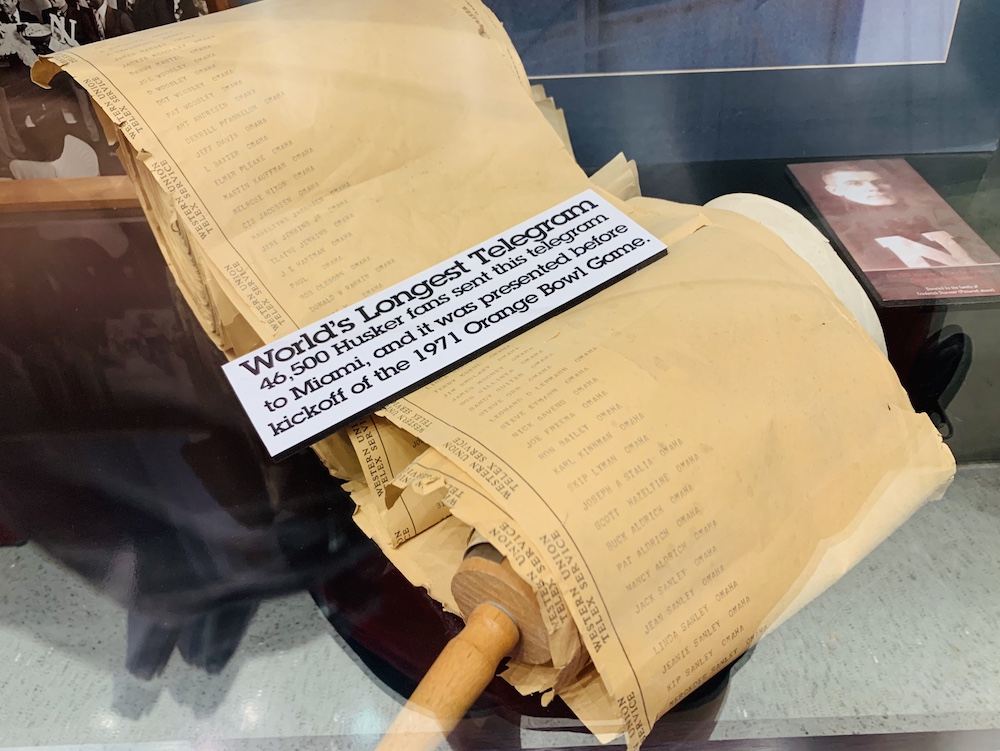 At the conclusion of the 1970 season, players headed to the Orange Bowl to face off against LSU with a national title on the line. Back in Nebraska, 46,500 people who couldn’t attend the game in person each paid $1 to help send a short good luck message. Each participant signed her or his name to the telegram. What resulted was the longest telegram in history being delivered to the Nebraska locker room shortly before kickoff. The telegram message was just three words: “Good luck, Cornhuskers”. Final score of that game? Nebraska 17, LSU 12. The Big Red brought home its first National Championship that year. 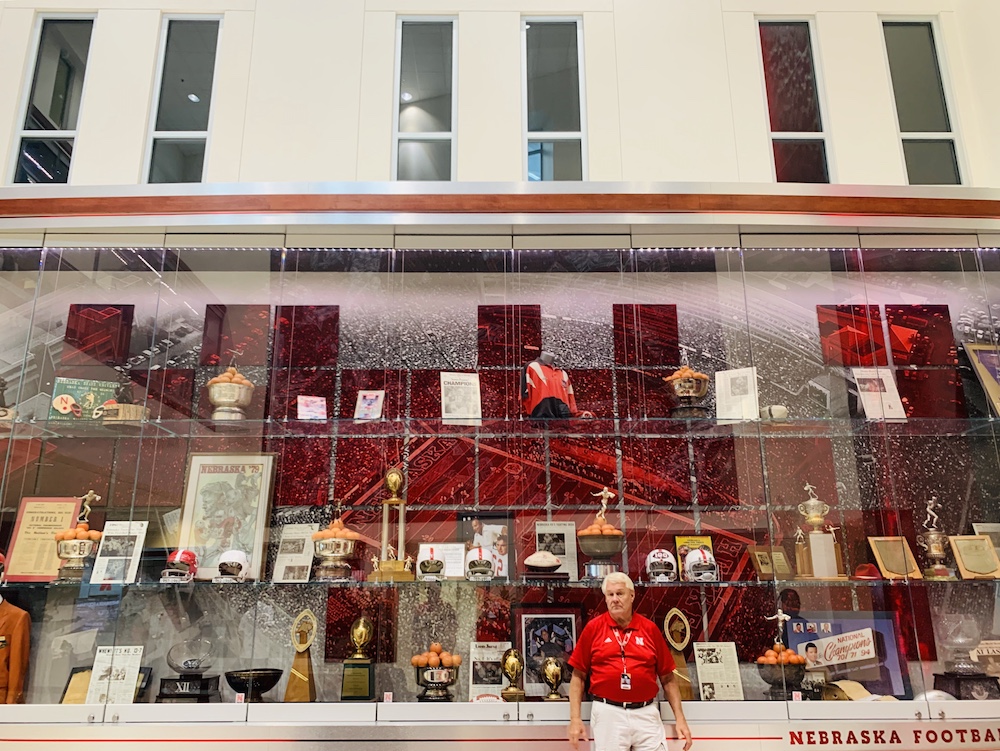 Memorial Stadium is home to the greatest fans in college football

Anyone attending a game quickly realizes that there is something special about the experience at Memorial Stadium in Lincoln. In fact, etched over the stadium doors you’ll find the words, “Through these gates pass the greatest fans in college football.” 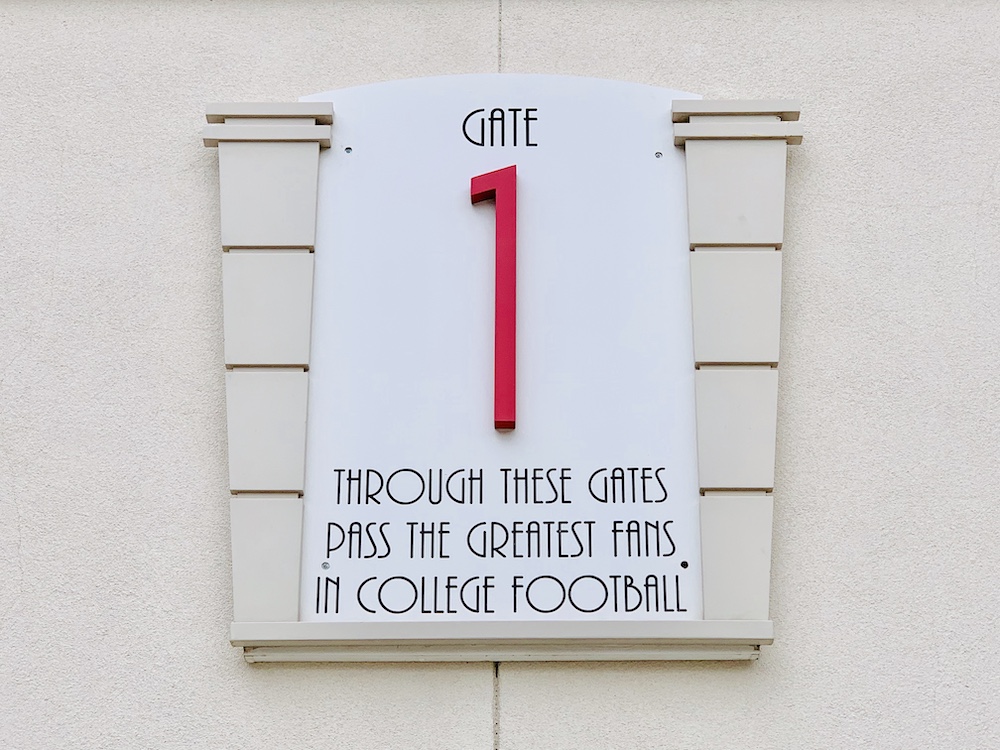 In the Traditions Lobby, there’s a huge mural dedicated to the fans who hold the record for the longest sellout streak in college football. Husker faithful have purchased every single ticket to every single game since 1962. And it’s not like this is an easy record; the stadium holds about 90,000 people. By the way, the next closest team’s sellout streak is more than 200 games (or 35 years!) behind. 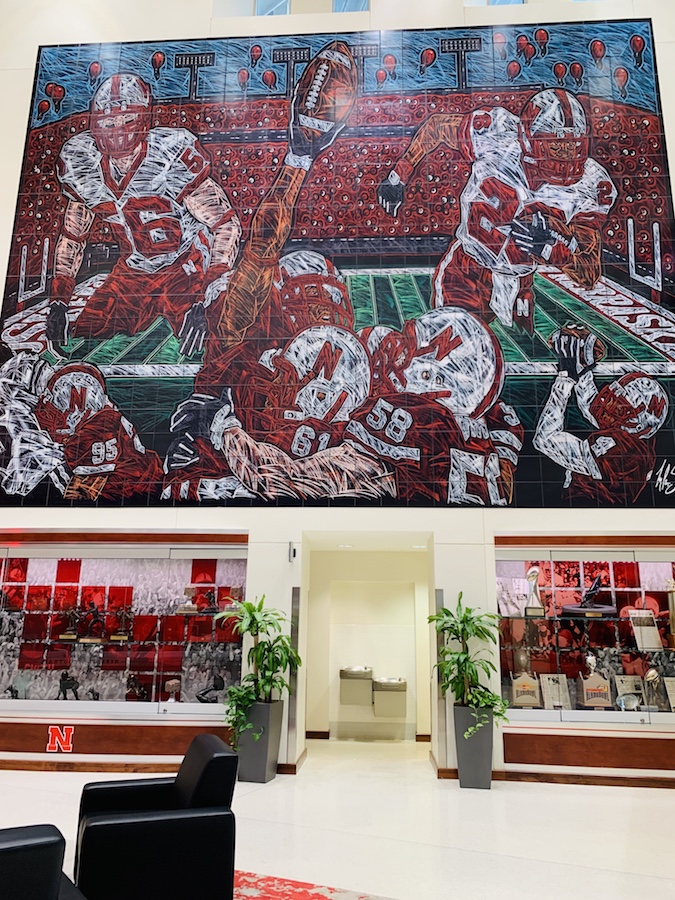 Nebraska fans all recognize the iconic horseshoe that hangs just outside the Huskers’ locker room. 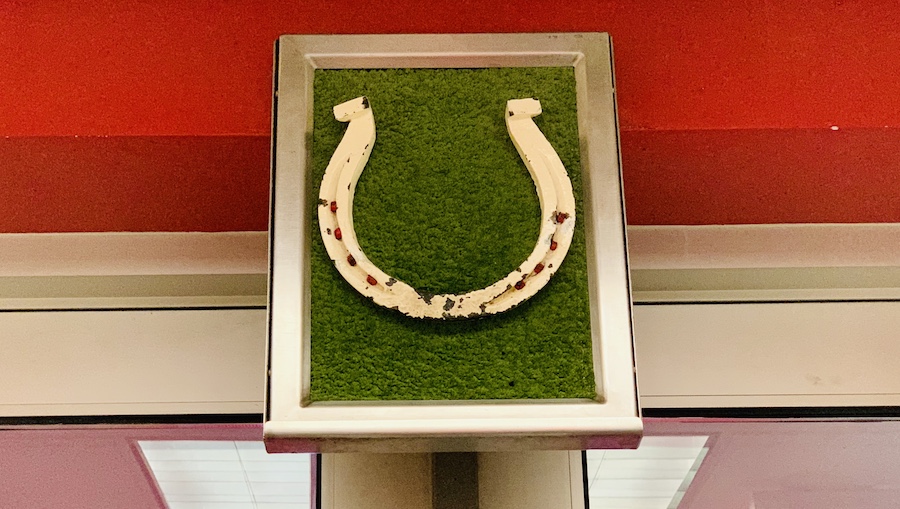 Before every game, players and coaches alike reach up and touch the horseshoe for good luck. What you may not know is that the horseshoe tradition dates back to at least the 1930’s. Ever since then, it has been a part of every game day, moving to a place near each locker room the team has had over the years. It even travels with the team to road games. 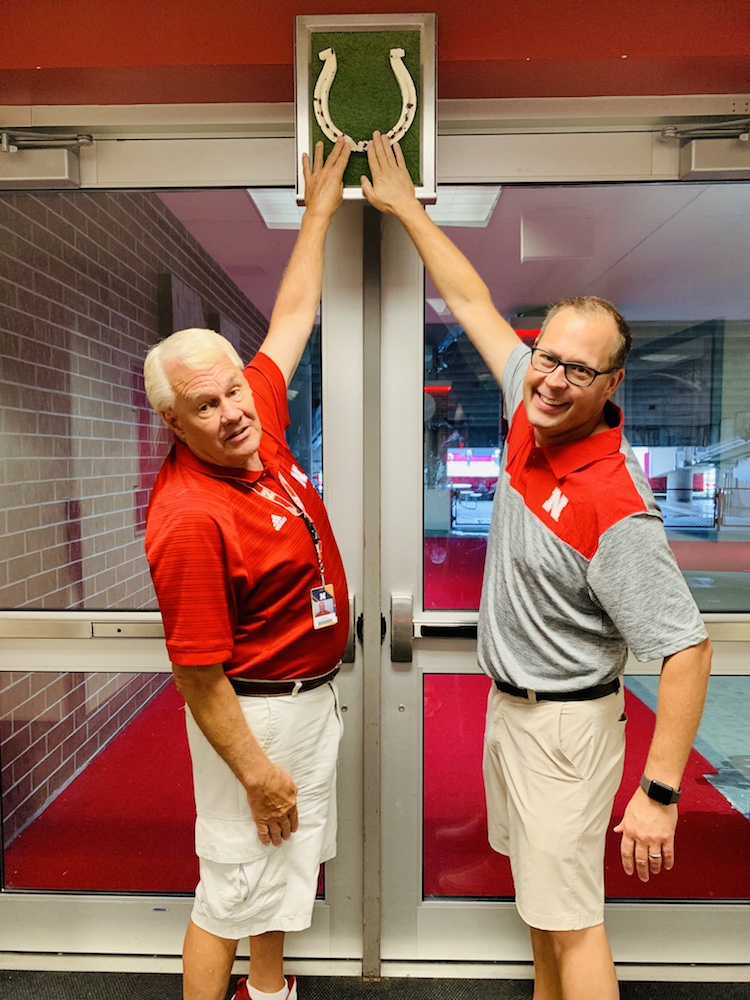 Weight room (but through glass doors) – Former Husker All-American Ndamukong Suh gave $2 million to help build a state-of-the-art weight room for Husker football. After learning how Nebraska pioneered strength training in football, take a peek inside and see how far the strength and conditioning program has come. 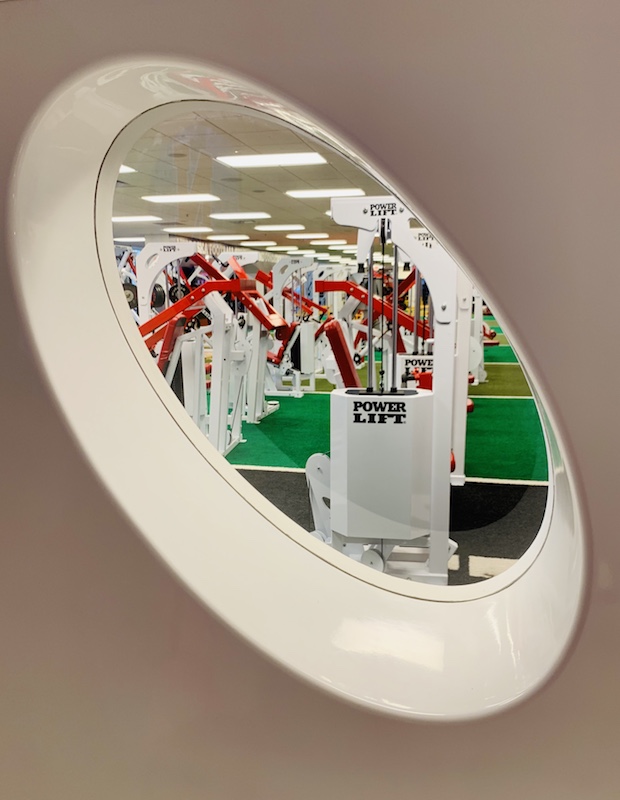 The hallways –  Along the walls in the football complex, you’ll find the hallways full of Husker football memories, records and statistics. Take some time and look at photos of past team captains, see the all-time statistical leaders for a variety of categories, and take in the paintings of Nebraska Football’s consensus All-Americans. 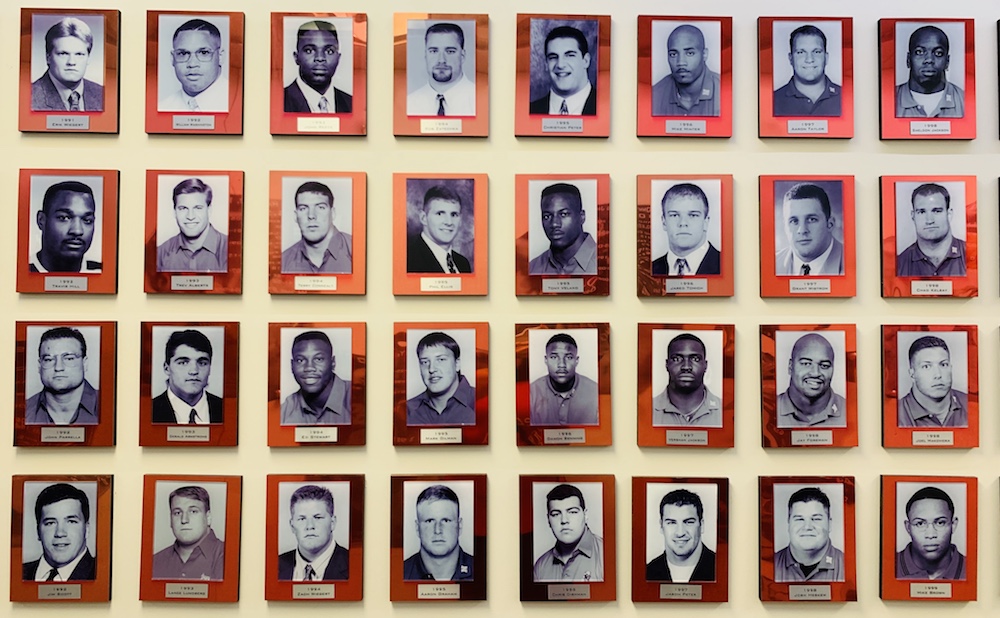 Tunnel walk / field / practice facilities – These stops are included on a guided tour of Memorial Stadium in Lincoln unless there is practice or an event taking place.

What you won’t see on Memorial Stadium tours at Nebraska

Old Tunnel Walk – Before the completion of the current football complex, Nebraska’s locker room was in the South Stadium. Husker fans donated money for bricks to serve as a sort of red carpet for the path the team took from the locker room to the field. When the locker room moved to the North Stadium, the bricks did not. We learned that the visiting team now uses Nebraska’s old locker room but the special bricks are roped off and the opponent follows a different path to the field.

Old stadium facade – With the completion of stadium expansions, the original facades of the stadium have been covered by the new construction. While visible inside the expanded area on game day, the facades are not included in the tour.

Locker room – For privacy of players and security reasons, the locker room is not included on the tour.