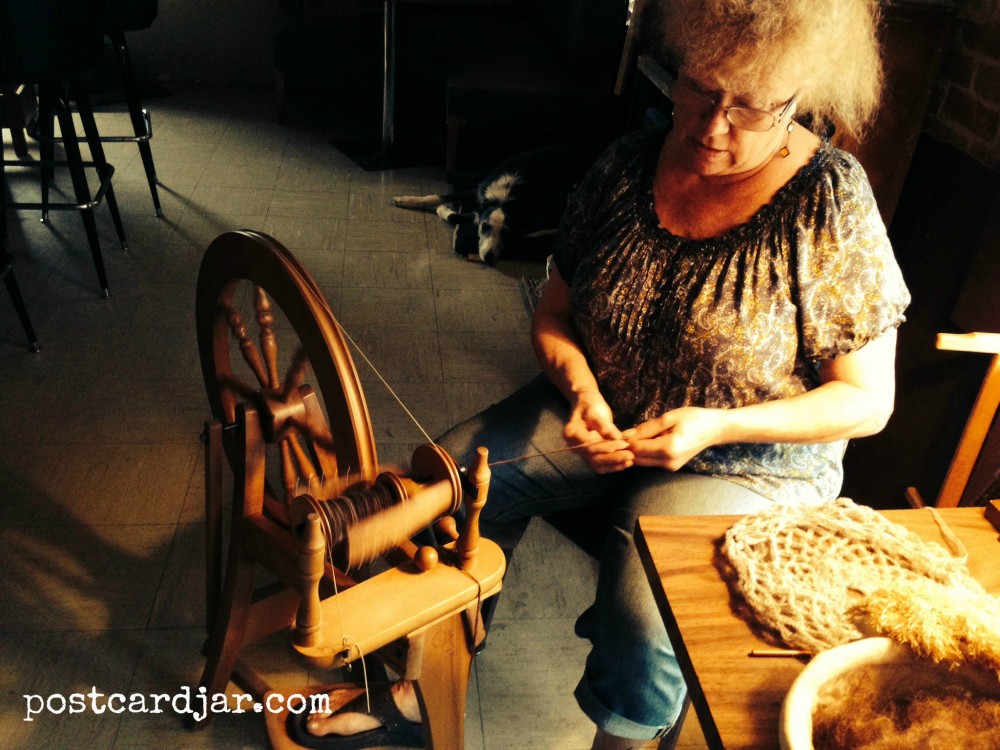 I met Jeanne Goetzinger several years ago, when my daughter, Meghan, and I were exploring northwest Nebraska. We saw a lot of interesting things on that trip, but none was more memorable than the straight-talking, curly-haired woman who greeted us in the parking lot of the historic Olde Main Street Inn and encouraged us to step up to the bar and enjoy a refreshing Sarsaparilla after a long day’s drive. She was unlike anyone else we encountered on our week-long, annual trek across our home state. She was a kindred spirit, but tough as nails and I couldn’t wait to introduce her to my husband, Steve, when we decided to spend a night in Chadron this summer. 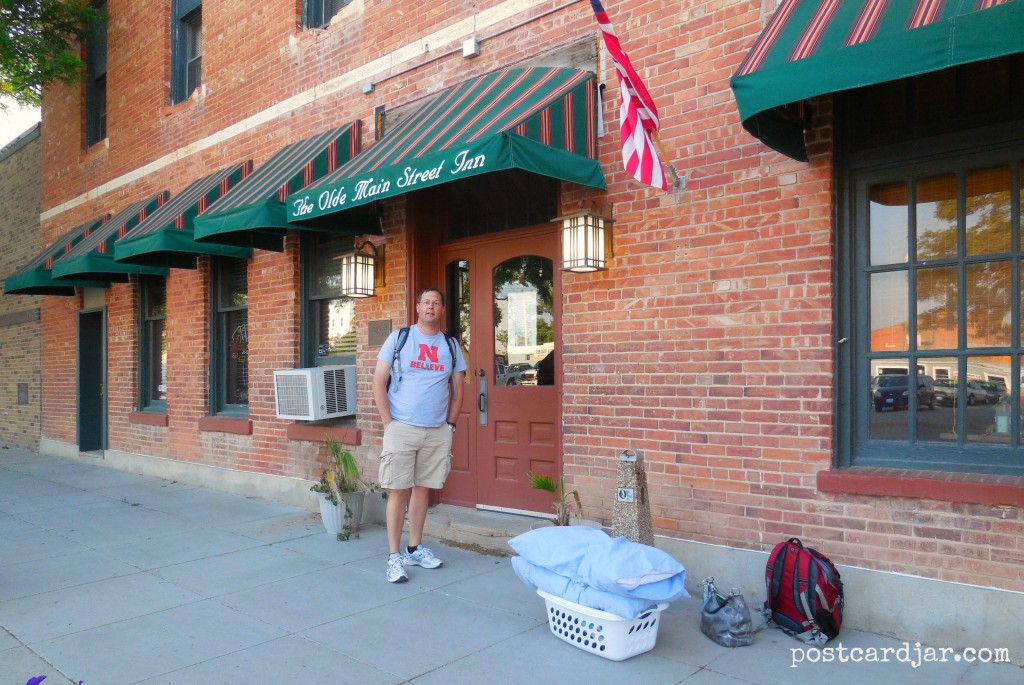 Checking in to the Olde Main Street Inn in Chadron, NE. (Photo by Ann Teget for postcard jar.com)

We arrived at the Olde Main Street Inn mid-evening and Jeanne, a second-generation innkeeper, came down from her second-floor apartment to unlock the front door for us. First, she introduced us to her companion, an American Stag Hound named Grace, whom she rescued two and a half  years ago, even though she suspected (by the look in her eyes) that the dog was pregnant. In fact, the dog gave birth to 10 puppies three weeks later and Jeanne says Gracie was responsible for making 10 families very happy. After introductions, she kindly invited us to take a seat at the empty bar, asked what we’d like to drink and then poured herself a glass of wine. While her glass sat practically untouched, Steve and I sipped our cold beers and listened to Jeanne reminisce about the historic hotel and the many characters who have graced its doors. 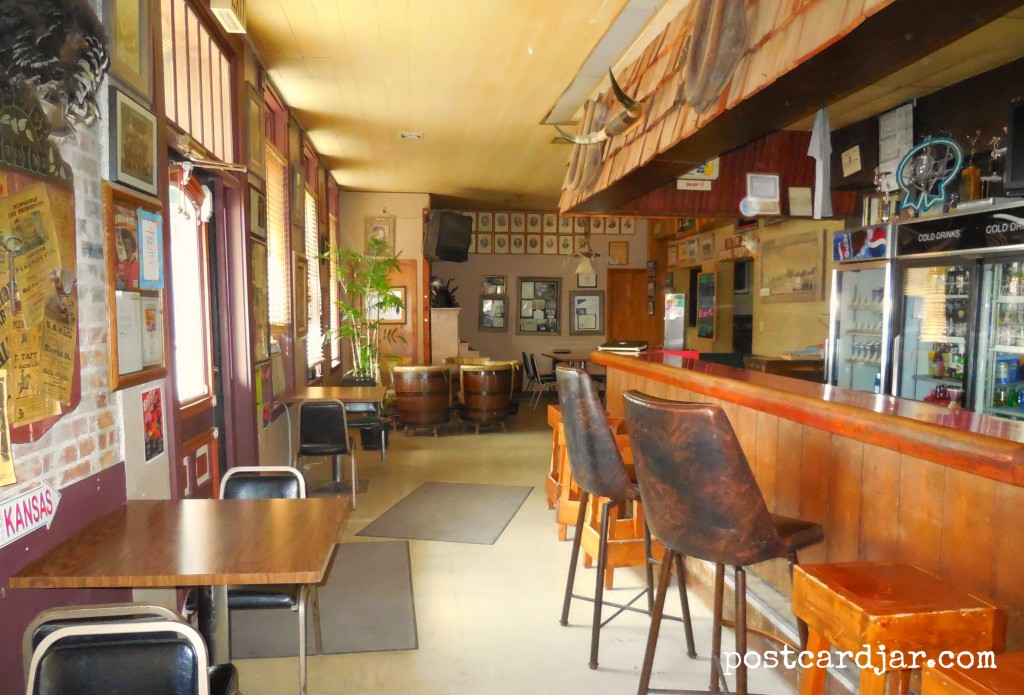 The bar at the Olde Main Street Inn. (Photo by Ann Teget for postcard jar.com)

She told us about the room where General Nelson Miles stayed when the hotel was his headquarters during the Wounded Knee Massacre in the 1890s. She explained how her mother, Evva, purchased the hotel and restaurant in 1969 and managed it until Jeanne took over in 1990, retiring her mother to what she calls “Grande Dame status.” And she was most excited to name drop the authors, artists, and celebrities (Dick Cavett and Woody Harrelson to name a few) who have spent time at the Olde Main Street Inn over the years.

Today, the inn serves as a bed and breakfast and the bar is open Wednesday through Saturday. According to Jeanne, it attracts quite an eclectic group of locals and travelers that make thought-provoking conversation. We were there on a Monday, so the inn was pretty quiet — just us and few construction workers. We asked her if the bar attracts many of the college students who attend Chadron State College up the street. She said, “Just the really smart ones. I don’t serve Red Bull. And I don’t serve Jägermeister. Whoever thought an energetic drunk was a good idea?”

After our welcome drink, she walked us up two flights of steps and down a wide hallway to our third-floor room. 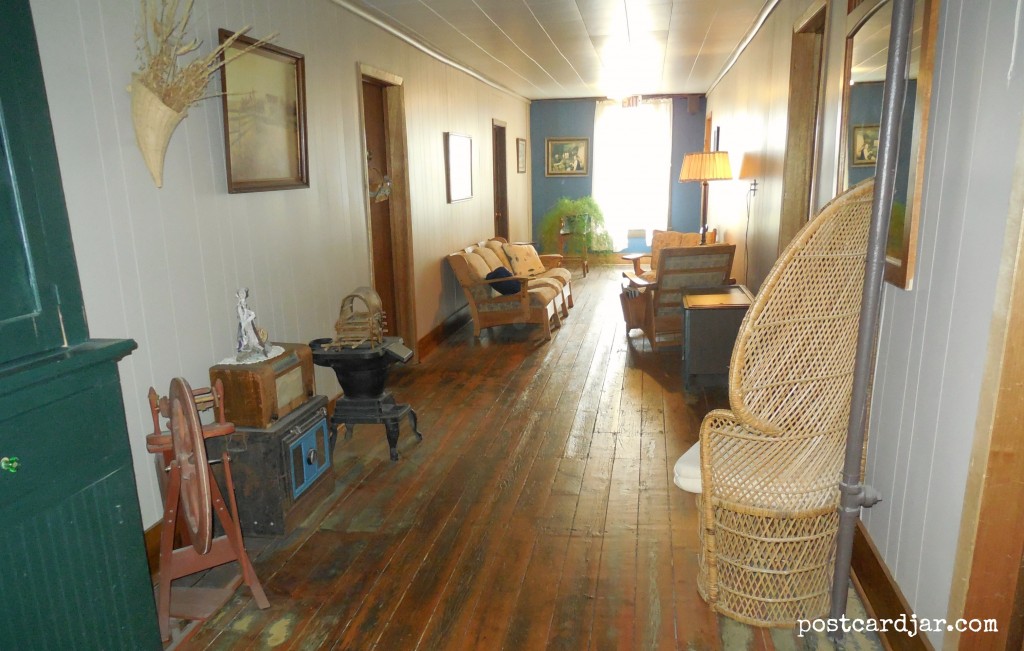 It was fun to think about the cowboys, Generals, and celebrities who have also walked these wide hallways. (Photo by Ann Teget for postcard jar.com)

Because all of the rooms have full beds (just like in the 1800s) and my 6’4″ husband and I would not fit well in one, we chose to stay in the Railroad Room, as it had two beds and a small bathroom. The room and its railroad-themed contents were dated, but Jeanne made sure the bathroom was clean, the sheets were freshly pressed, and it met our needs after a long day of exploring Western Nebraska. 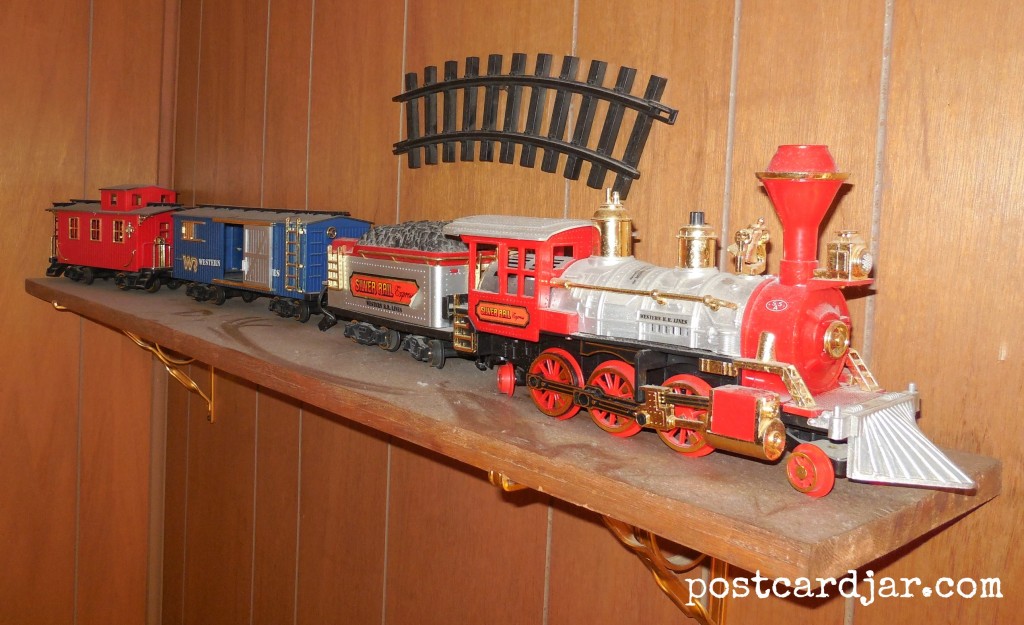 We stayed in the railroad-themed room at the Olde Main Street Inn. (Photo by Steve Teget for postcard jar.com)

As we walked back to the hotel through the alleyway after having dinner at Maria’s around the corner, we were greeted again by Jeanne and her 88-year-old mother. They were outside, enjoying Jeanne’s garden area behind the hotel and they graciously invited us in. We explored her potted flowers and herbs and admired the clematis and hens and chicks she had planted herself. The garden was a respite for the two women and apparently, for anyone else walking by who needed a break or a quiet and relaxing place to rest. 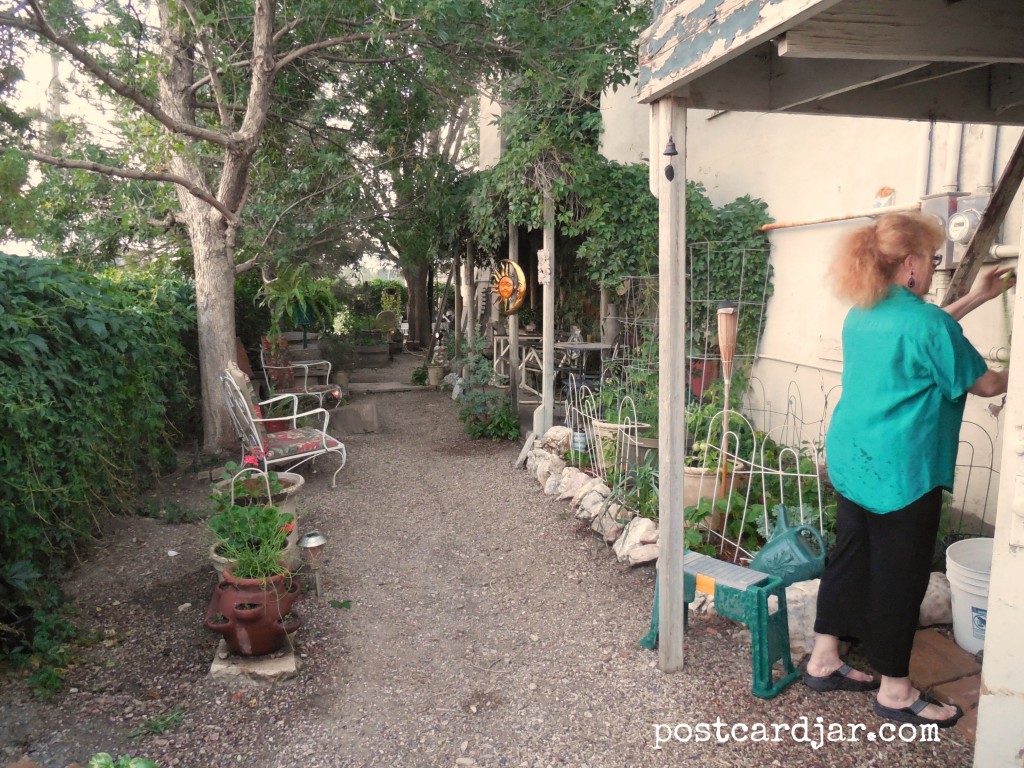 Jeanne tends to her garden behind The Olde Main Street Inn. (Photo by Ann Teget for postcard jar.com)

When we came downstairs the next morning, Jeanne was ready and waiting with a cinnamon roll and a strong cup of coffee. We visited about our plans for the week and she told us more stories about the inn, the people of Chadron, and the eclectic collection of decor and art work that encompasses the entire building. She even took a few minutes to tell us about how she first became interested in spinning yarn and then even demonstrated her craft for us. Click here to see Jeanne spinning yarn!

She walked us through what used to be a formal dining room and showed off her daughter, Lorri Meng’s paintings. Jeanne’s love and appreciation of art was evident. She told us she was even going to open the dining room this summer for a special exhibition called “Au Naturale:  A Celebration of Art and the Human Body.” The free exhibition would give local artists like Don Ruleaux, Robin Smith, Lorri Meng, and Bob Zillig an opportunity to display their art in one-of-a-kind fashion — perhaps a first for rural Nebraska.

As we prepared to leave the Olde Main Street Inn, Jeanne asked if she could fill our cooler with ice and gave us each a bottle of water for the road. When my husband extended his hand to thank her for her hospitality, she brushed it aside and said,”I’m a hugger. Always have been.” She gave us each a warm hug, wished us well, and sent us on our way. As Steve and I walked to the car, we smiled at each other and didn’t even need words to express what we were both thinking. It’s people like Jeanne who make Nebraska especially nice.