Ann insisted we go to Toadstool Geologic Park on our Nebraska trip because it was such an incredible and unique place.  As we rounded the bend into Crawford, Ann reminded me that we had a 19-mile ride on a bumpy road to get to Toadstool.  I decided then and there that it would be best if we stopped at the local C-store to use the restroom before our adventure began.

Once inside, I thought I’d firm up what I knew about the directions to the park.  It was then that a friendly rancher overheard us and told us the usual route was closed because they are replacing a bridge and they need to hurry up because they are taking way too long so we would have to take an extensive detour.  As I asked questions, the rancher showed a little “Nebraska Nice” and offered to lead us on one of the detours.  As he talked, though, he realized he wasn’t quite going all the way to Toadstool so suggested we should go over the the Crawford Visitors’ Center by “that caboose just over there,” for more complete details.

We hopped in the car and made the 15-second drive over to the caboose and saw a lady watering the flowers along the sidewalk leading to the center.  She led us inside, gave us a map of the detour and said she wasn’t sure which of the two possible routes would be easiest but the one to the south would be more well traveled.  The map was a good one, and very clear, so the stop was definitely worth it.

If you are going to go to Toadstool, be ready for a long, difficult drive–especially with the detour that’s in place.  On that south route, you’ll go up hills and down dales, around corners and over washboard dirt and gravel roads.  All that being said, you should know that the drive is one of the most beautiful I’ve ever taken–around each of those bends is a view even prettier than the one before.  Simply breathtaking and well worth the trip!  One more lesson that sometimes detours are little gifts given to us by life.

After the long drive, you’ll finally arrive at the park entrance, your head spinning from all the beautiful sights you’ve seen.  The park has spaces for about six campers and has two modern (but not plumbed) outhouses.  The day we went, there was only one other group, so we really enjoyed the solitude.  At the entrance you need to put your daily use fee in an envelope and drop it in the metal tube–I think it was $3 –which turned out to be three of the best dollars I’ve ever spent in my life. Leave your car, and hop on the one-mile looping trail through the park.  The first quarter mile is universally accessible.  You’ll see some interesting formations at the end of that quarter mile–huge rocks propped up at impossible angles.  You’ll take photos of these phenomena, think they’re neat, but wonder why we raved so much about this place. 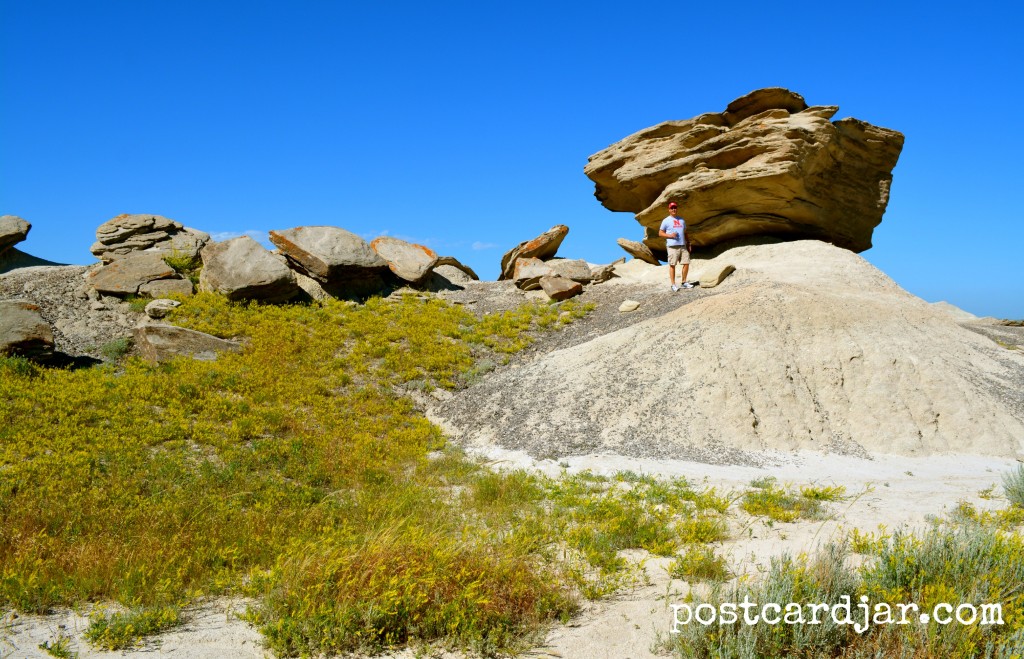 Some of the many unique rock formations at Toadstool Geologic Park in northwest Nebraska. Steve (who is 6’4″) is in the picture for scale. (photo by Ann Teget for www.postcardjar.com) 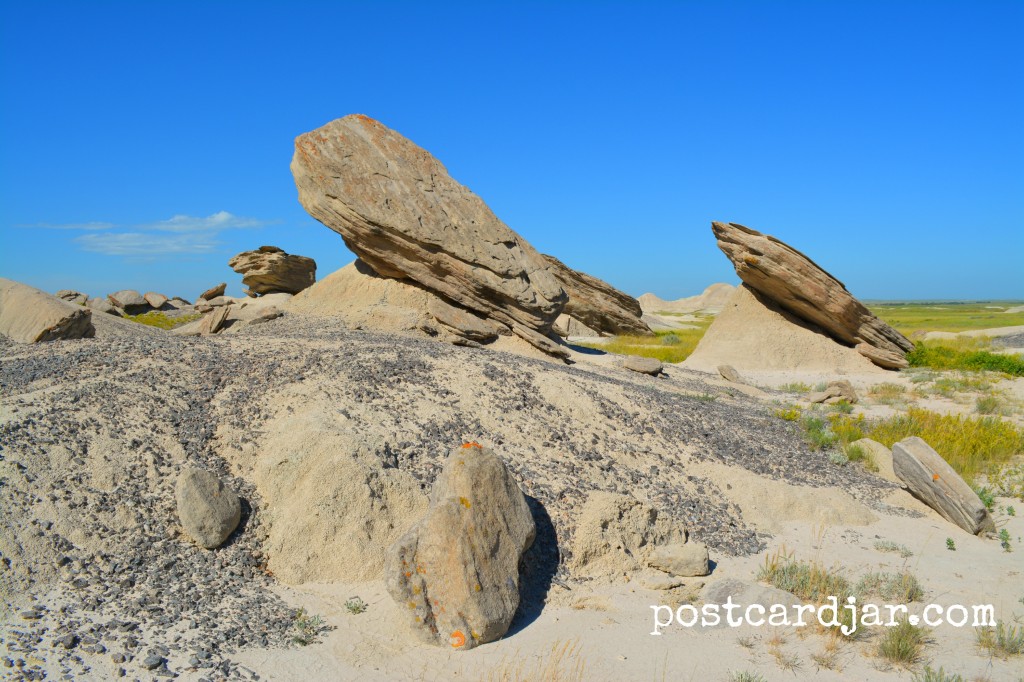 The real treat comes when you follow the trail through the rest of the park.  It is not an easy trail, but it is definitely worth taking.  You’ll walk along dry creek beds (unless it’s been raining), and climb up and over crazy rocks that give you the feeling that you are on the moon.  You’ll cross chasms, and skirt along small cliffs (nothing too dangerous, although you can imagine it is at the time).  You’ll do all this to see some of the most amazing, unique geology you’ve ever seen. 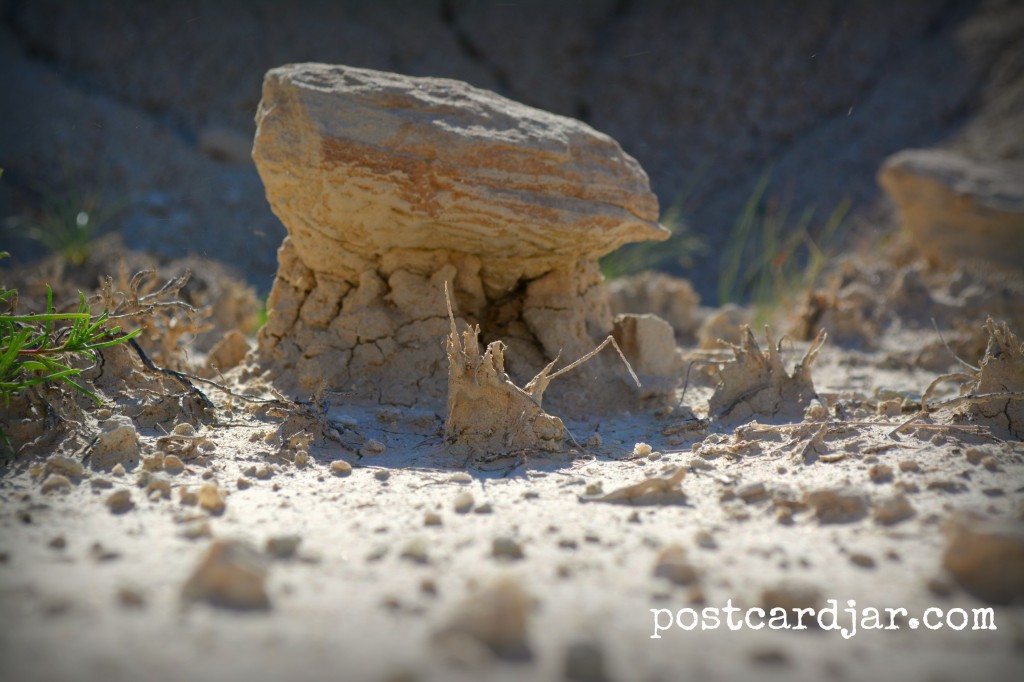 A “toadstool” at Toadstool Geologic Park in northwest Nebraska. (photo by Ann Teget for www.postcardjar.com)

You’ll see large rocks standing at impossible angles, or rocks hanging in the air, supported by only a thin column of dirt (these are the “Toadstools” because that’s what they look like).  This looks like stuff in Roadrunner and Coyote cartoons.  Near the end of the mile-long loop trail, your wife will tell you she’s going back to the car the way you came because she’s lost all confidence that you know where you’re going.  It’s about then that you’ll look up and, with a smile, tell your wife you can see your car. 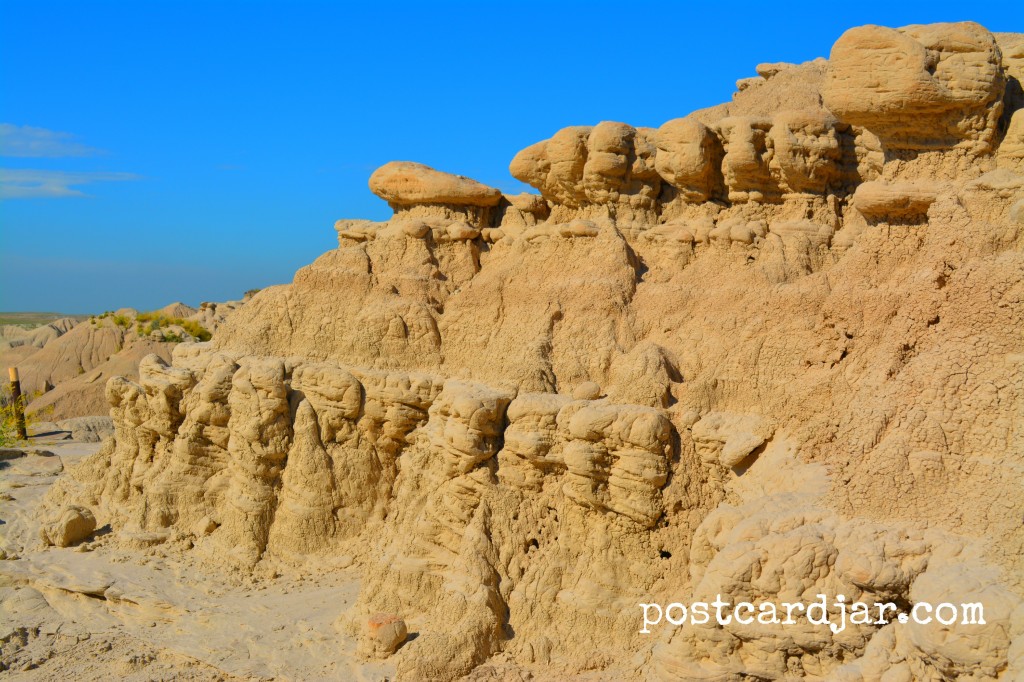 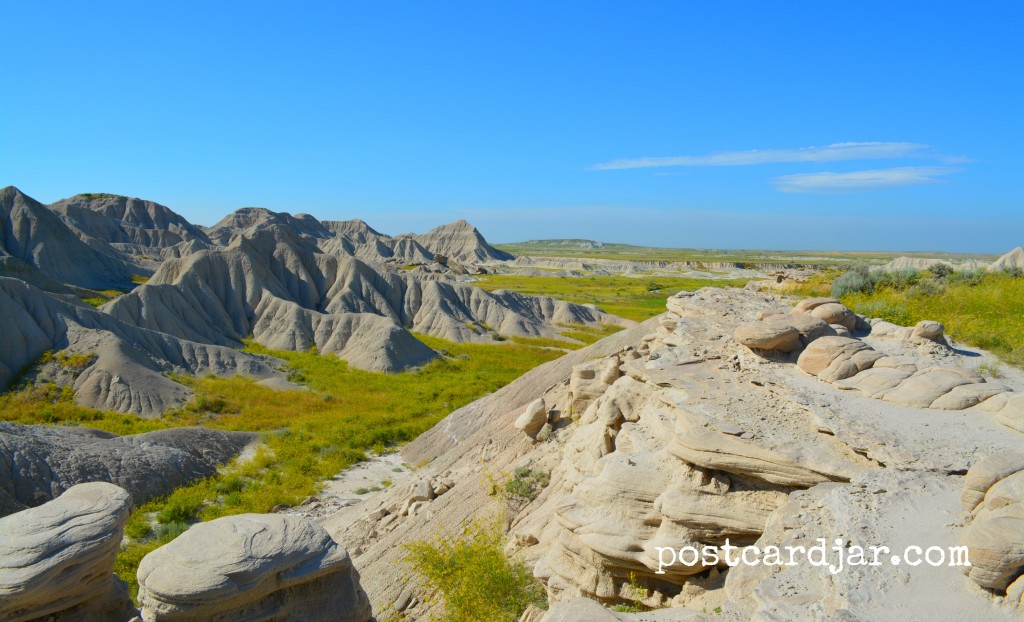 When we left, we took the northerly detour route. This is a much easier drive, and while the views were beautiful, they weren’t quite what we saw on the southerly route.   When you get there, check in with the visitors’ center in Crawford as the main road may be open again.  Even if it is, though, you might consider taking the southern detour route for its sheer beauty.  Plan 2-3 hours for your visit which includes drive time to and from Crawford. 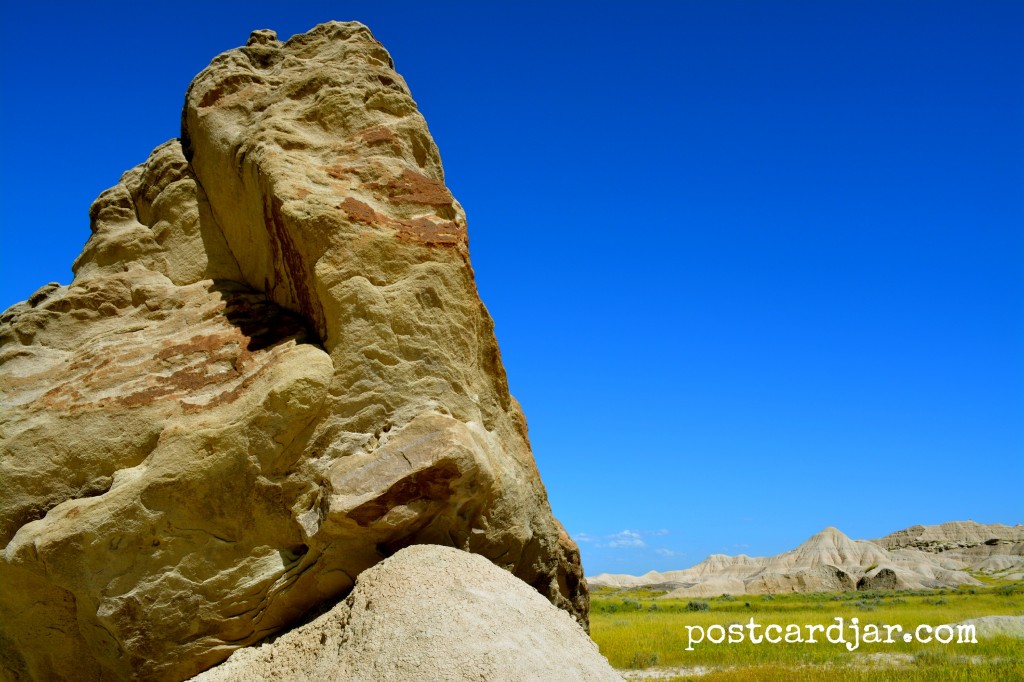 Toadstool Geologic Park is a place you should plan to go if you are ever within 200 miles.  It is incredible, beautiful and unlike anything you’ve ever seen anywhere else.  It is worth the drive to get there and definitely worth leaving I-80 to find. It is also #2 on our list of Nebraska’s Nicest Nine.  If you go there, you’ll know why.