Our first wonder of the world: Chichén Itzá 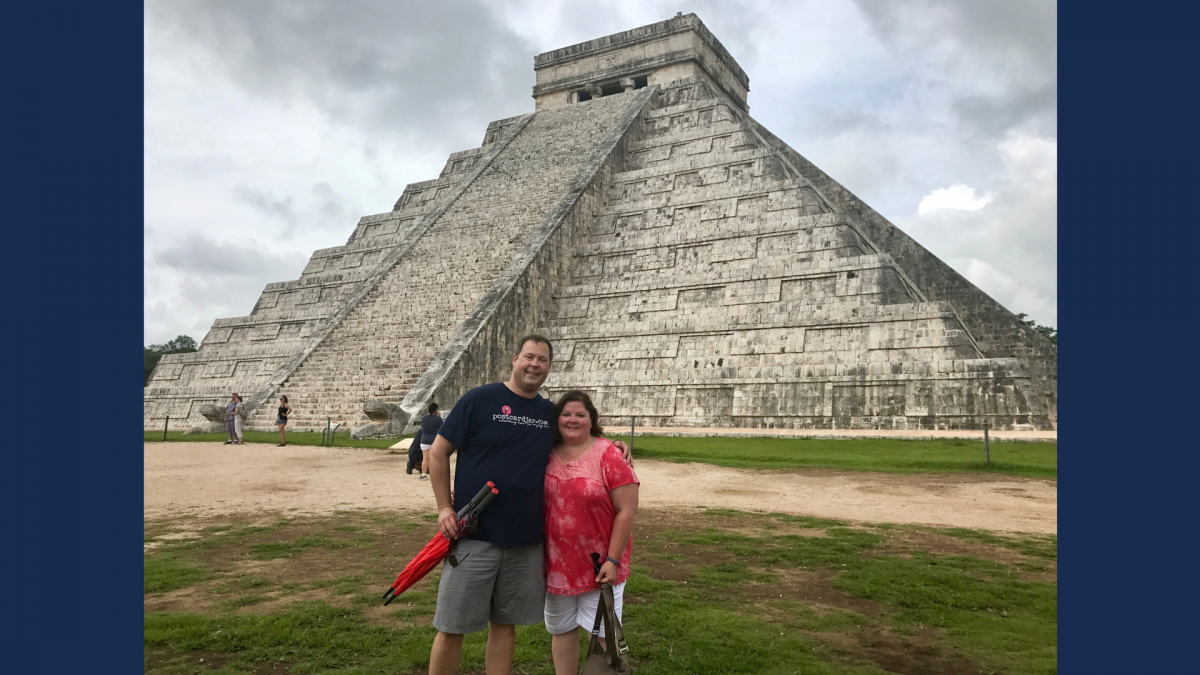 It may surprise you that despite spending most of my career as a public school administrator, I was actually an anthropology major in college. Yes, that’s right, I majored in anthropology and am not ashamed to admit that I’m an archaeology geek. I loved the semesters I spent studying the Mesoamerican cultures and their histories. So, when I realized our cruise last summer was stopping close enough for me to get a firsthand look at the ruins of Chichén Itzá, Mexico, I was super stoked. After all, it is one of the seven wonders of the world. 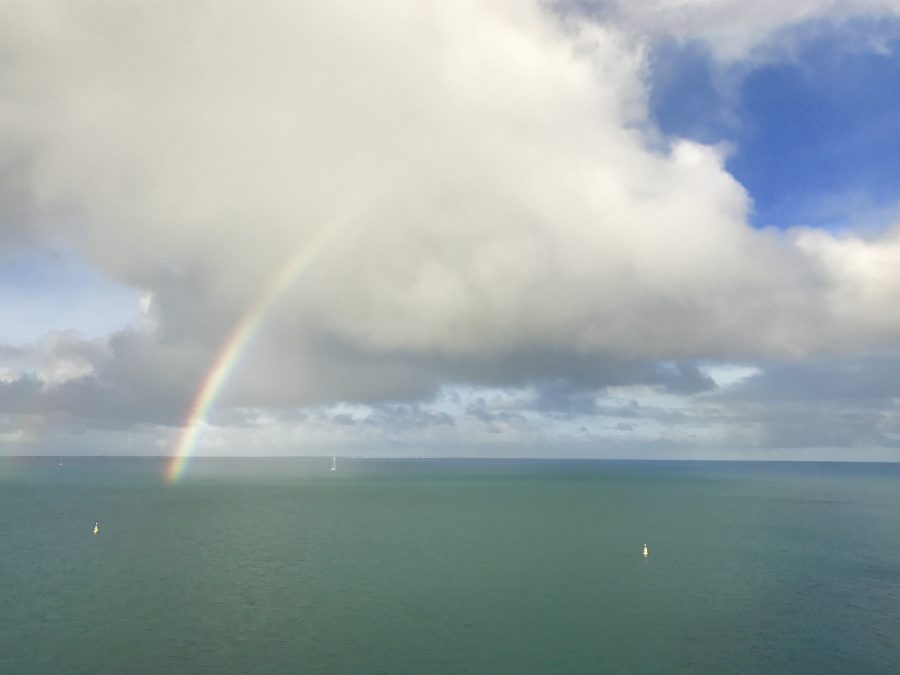 A rainbow in Progresso, Mexico, provided foreshadowing to the mix of showers and sun we’d have today.

Our ship docked near Progresso, Mexico, on a gorgeous June morning. When we looked out the window of our stateroom, we saw a beautiful rainbow in the distance, with tropical showers scattered all around. Something told me this was going to be an amazing day. And it was.

The trip from the port to Chichén Itzá is about two hours down a modern highway. We rolled along, passing in and out of rain showers while our guide explained local culture and history to us. This, along with the lush, green scenery and the excitement of being someplace new, helped the time pass quickly and soon enough we pulled into the entrance of Chichén Itzá where the van driver gave us each a bottle of water and an umbrella that could be used to block both rain and sun. 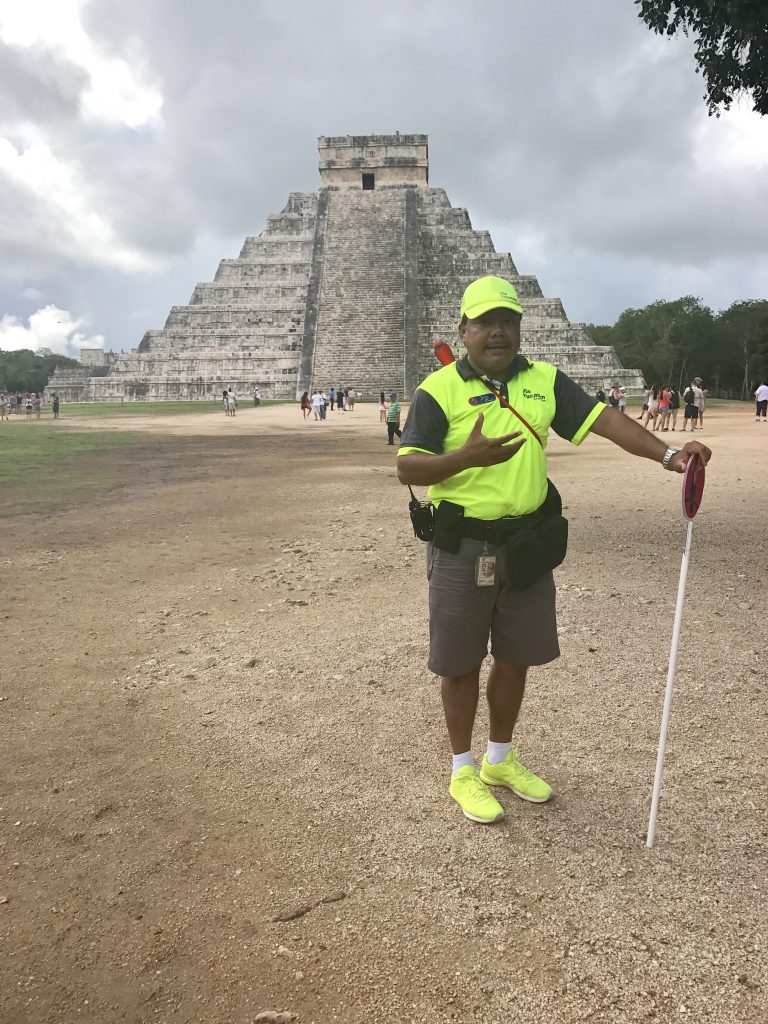 Our tour guide for the day knew a great deal about the history and culture at Chichén Itzá.

Let me just say that Chichén Itzá is a pretty busy place. When you walk in, there are people everywhere trying to sell you those cute, seemingly irresistible trinkets that you want to buy but know you don’t have any place to put them in your house if you do.

Because we had a guide, we moved pretty quickly past the mass of souvenir vendors and into a clearing near the center of the archaeological site. There, I had my first look at the pyramid that dominates the site and is considered one of the seven wonders of the world and the first one of those I’d seen with my own eyes. 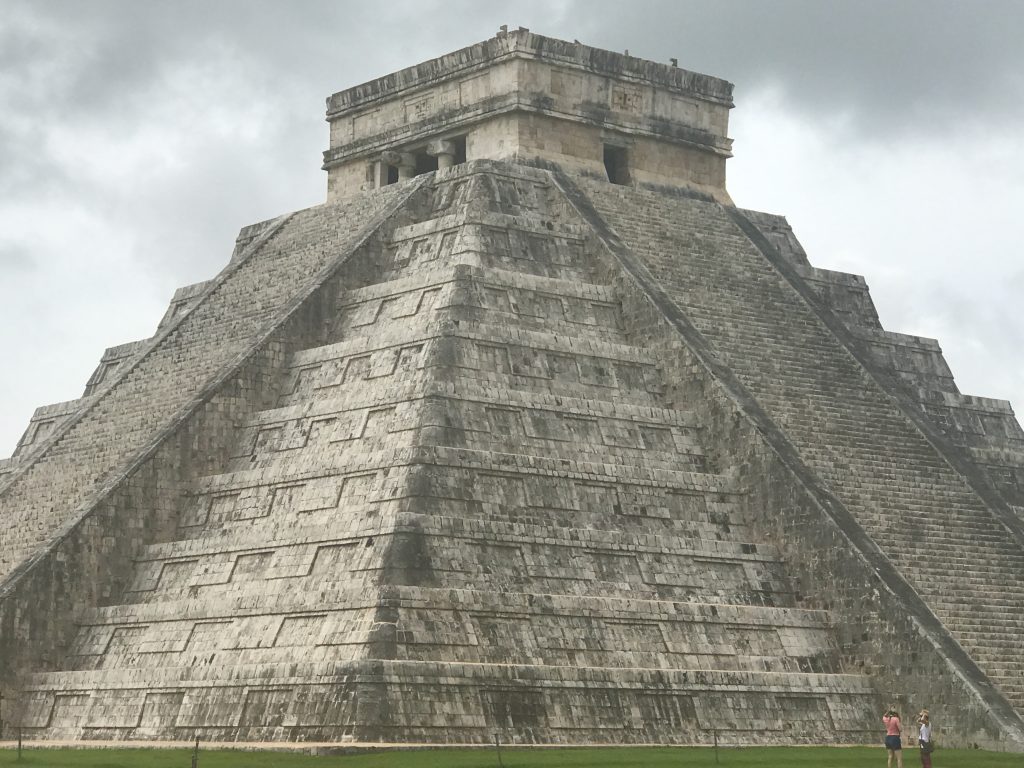 “El Castillo,” the main pyramid at Chichén Itzá, is considered one of the seven wonders of the world.

Seeing it, I could understand why it has earned that designation. Look at the two people standing in front of it in the picture below–it will give you some sense of just how huge this pyramid is. 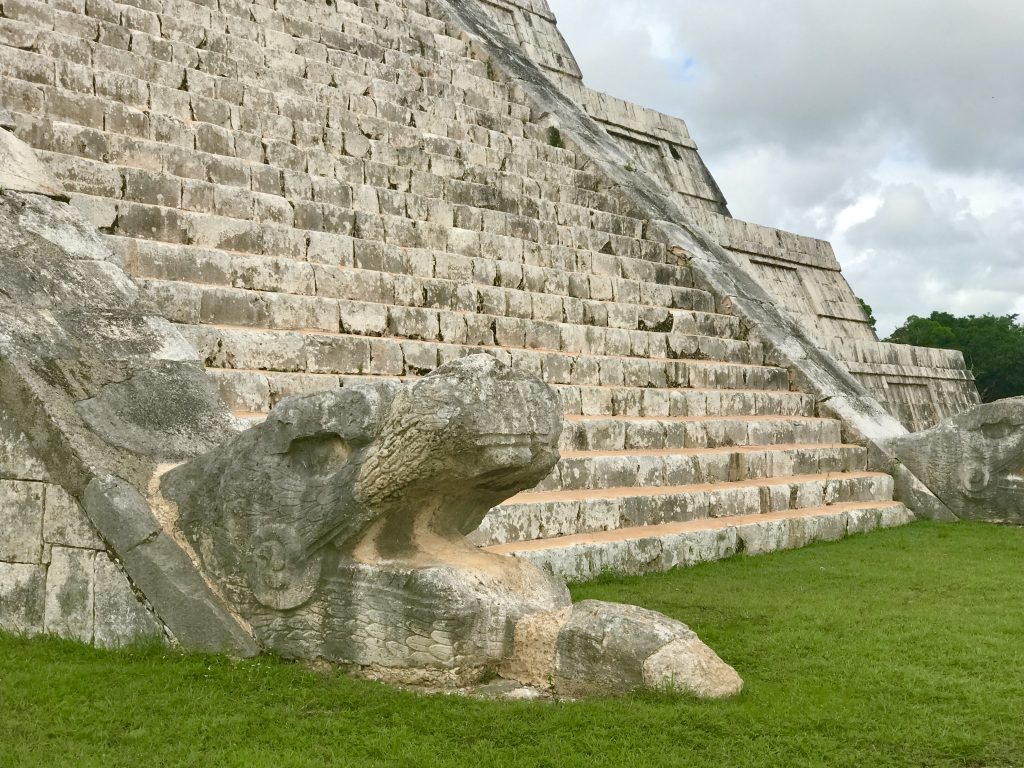 Serpents’ heads guard the bottom of the steps of the main pyramid at Chichén Itzá.

We walked through the ruins with our guide, stopping to look at the playing field of the sacred ball game. This game, a sort of combination of soccer and basketball in which players tried to get a solid rubber ball through a vertical stone hoop without using their hands, often lasted for days before someone scored a point and ended the game. The guide told us that the winning team won a prize unlike anything given to winners today. They won the privilege of being sacrificed to the gods. 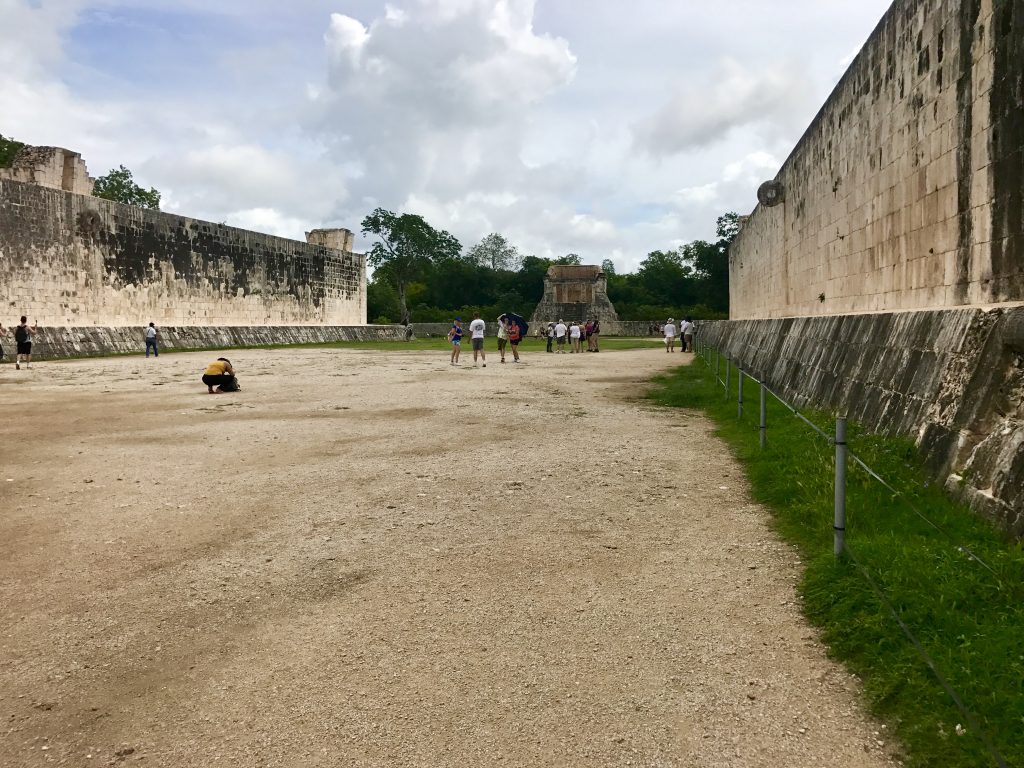 The court used to play the sacred ball game at Chichén Itzá. the goal was to get a solid rubber ball through the stone hoop suspended high up on the right side of this photo.

We wandered some more, stopping to look at bas-relief carving in the stone. Archaeologists have used carvings like these to help them get a better understanding of the ancient culture. 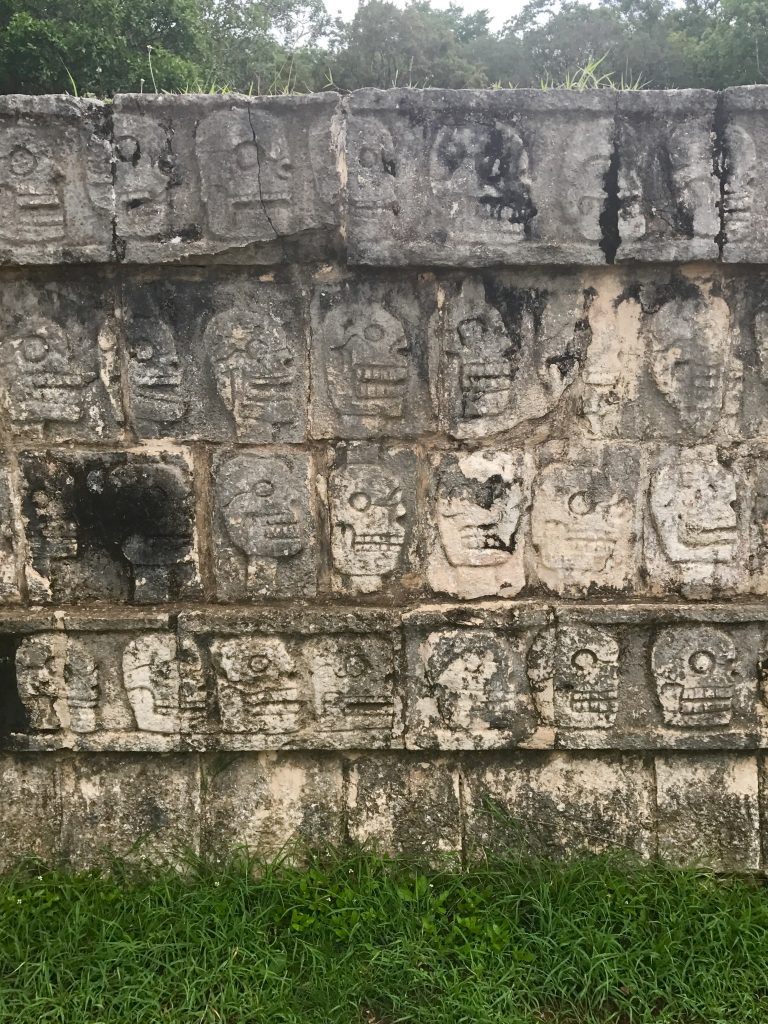 At the conclusion of the guided portion of our tour, we had some time to walk the site by ourselves and explore the ruins. As we walked, I thought of the generations of people who once lived and worked in this ancient city. 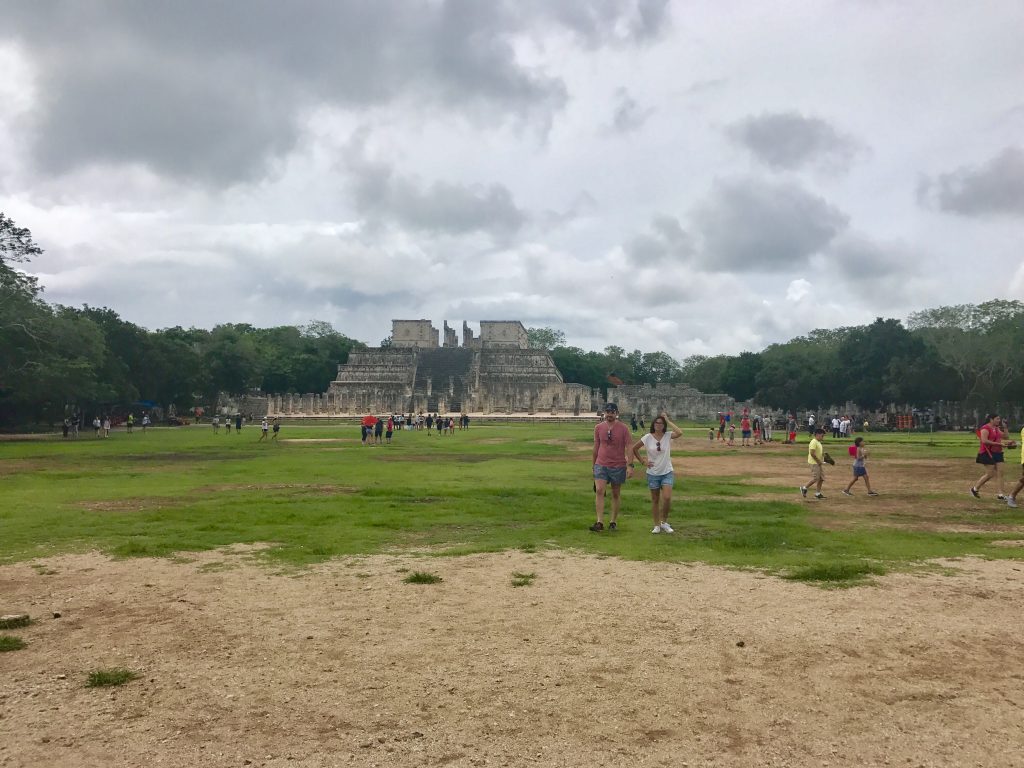 A view across the archaeological site at Chichén Itzá, Mexico.

I imagined the effort needed to build a massive stone pyramid, and thought of the amount of precise math needed to to align that pyramid just so it could be used as a calendar more accurate than the one we use today. I thought of the laughter and tears and children running that once filled the streets here. And I marveled that for all that we know about this place, there is so much more we don’t begin to understand.

As we drove away, I felt satisfaction that I’d finally visited but still had a yearning to know more about the people who once lived in Chichén Itzá. It’s what will bring me back again, someday.