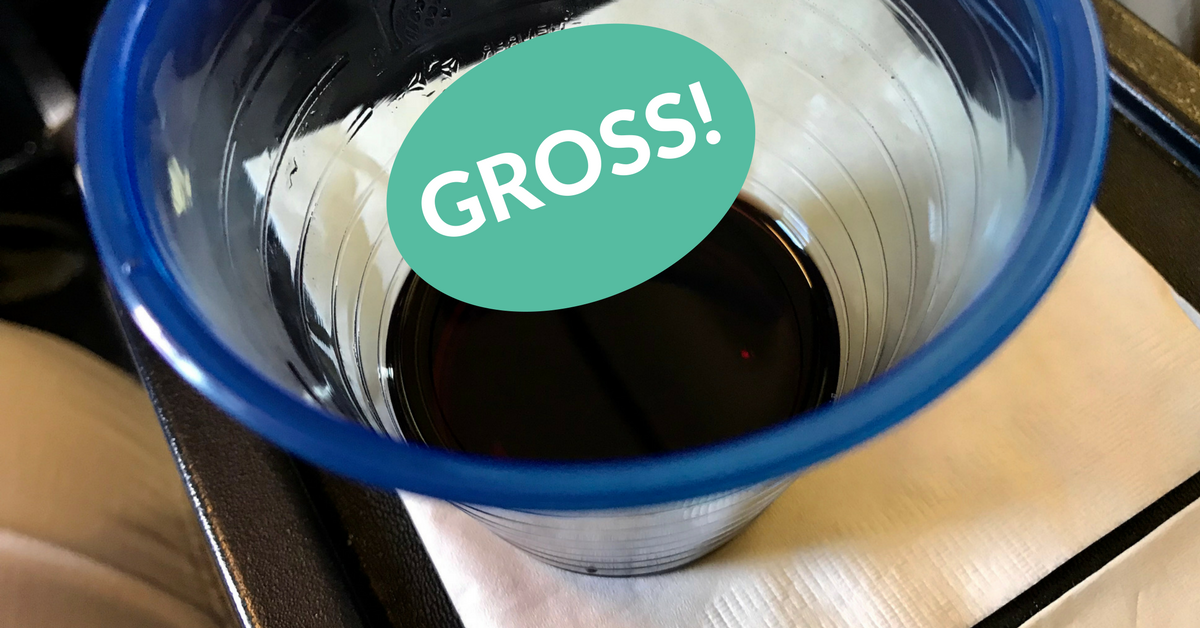 After one month; two countries; three flights; four days in a hospital; five time changes; six states; and 5,000+ miles, we were beyond ready to board our final flight and begin our journey home last week.

We spent the last night of our trip at a hotel in Miami with a great view of airplanes landing at the airport.

We were finishing up a wonderful month-long trip that included a national track and field meet in Kansas, apartment hunting in Tulsa for our daughter, breakfast at The Pioneer Woman Mercantile (yes, again) and a cruise to Mexico. 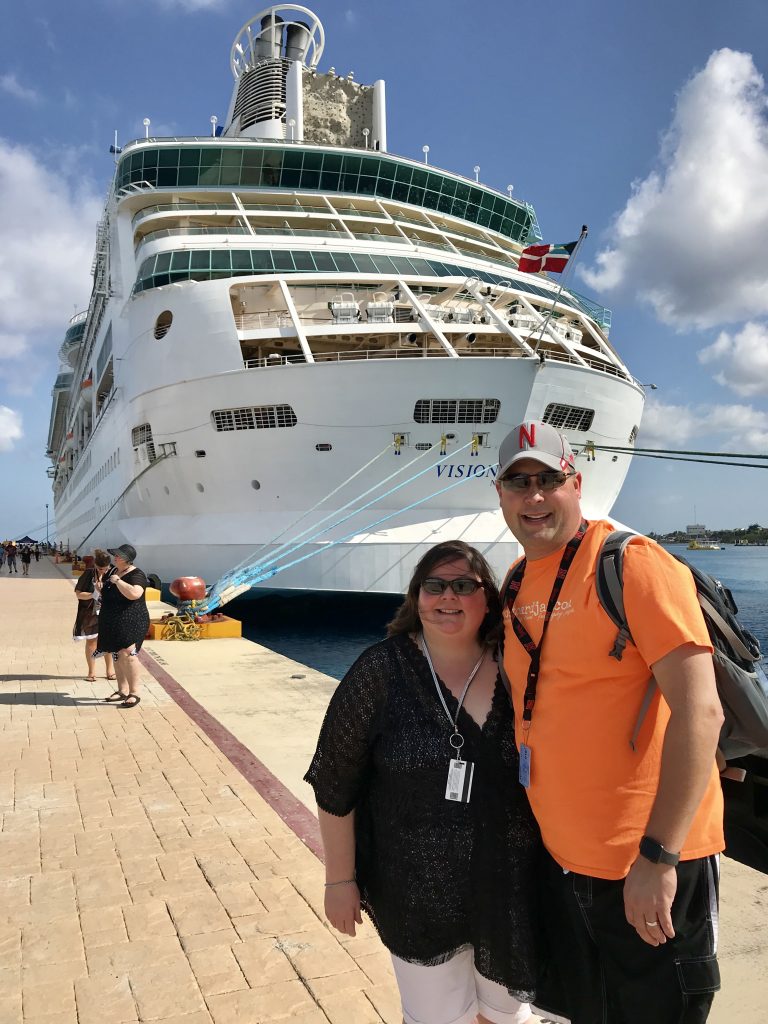 Steve and Ann pose for a photo on the pier in Cozumel in front of their ship, Vision of the Seas.

Leaving our car in Houston after the cruise, we boarded a plane to Key West with plans to spend a few days with Steve’s parents who live part of the year in the Florida Keys. Unfortunately, Steve’s dad was quite ill when we arrived and was hospitalized with pneumonia, so we canceled our return flight and stayed a couple more weeks until he was feeling better and we had a chance to really enjoy our time together. (He’s doing much better now, thanks for asking). 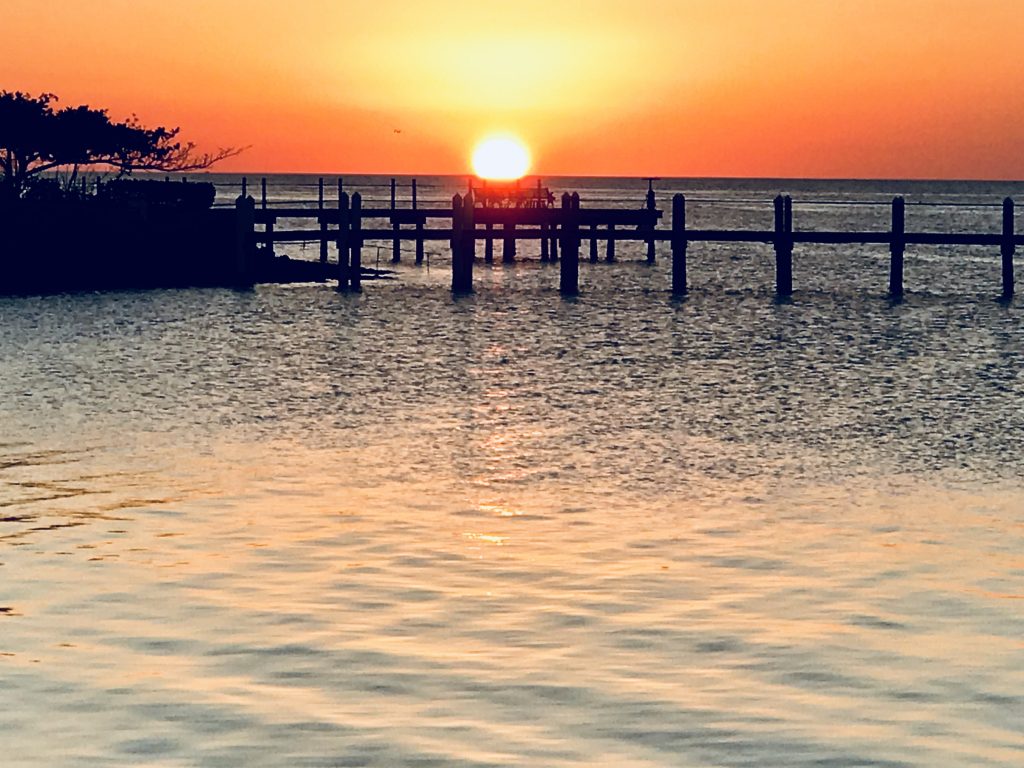 We loved watching beautiful sunsets while in Marathon, Florida.

Needless to say, after being away for nearly a month, we were sooooo ready to come home. We booked a return flight from Miami to Houston (because that’s where we left our car) and were so excited when we checked in at the airport and learned that we’d been upgraded to first class! A complimentary upgrade had never happened to us before and we were starting to feel like the long trip home was going to be pretty relaxing after all. 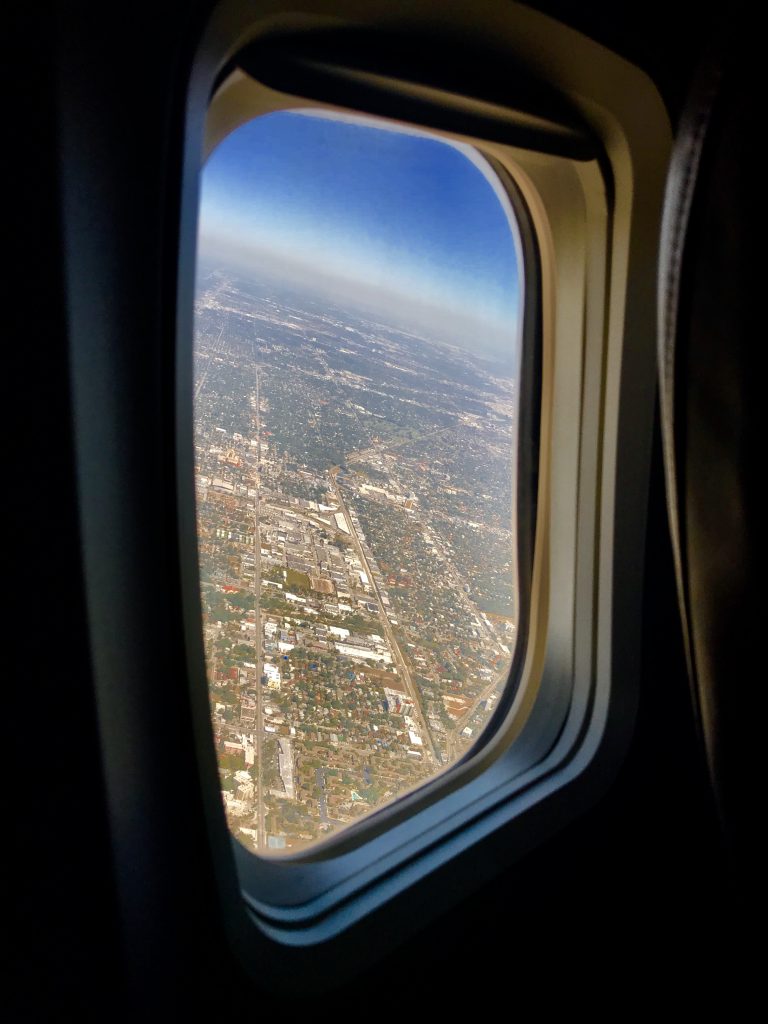 The view of Miami as we departed.

We got into our extra wide, comfy first-class seats and within seconds, the cheerful flight attendant asked if we’d like something to drink before takeoff. It was almost noon, so we each ordered a glass of red wine. After all, it was our fourth blogiversary and we were headed home! 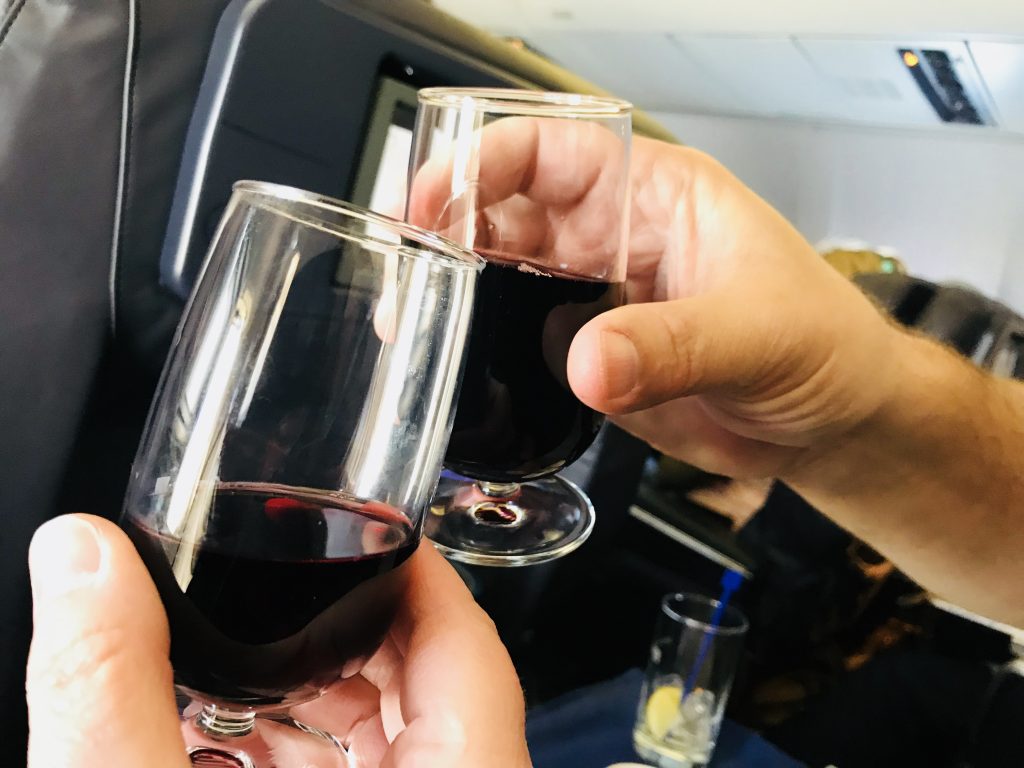 We toasted our 4th blogiversary and were ready to relax.

Still a bit shocked to find ourselves in first class, we settled into our seats and began perusing the TV menu and would you believe it, my favorite Food Network show, The Pioneer Woman, was on! 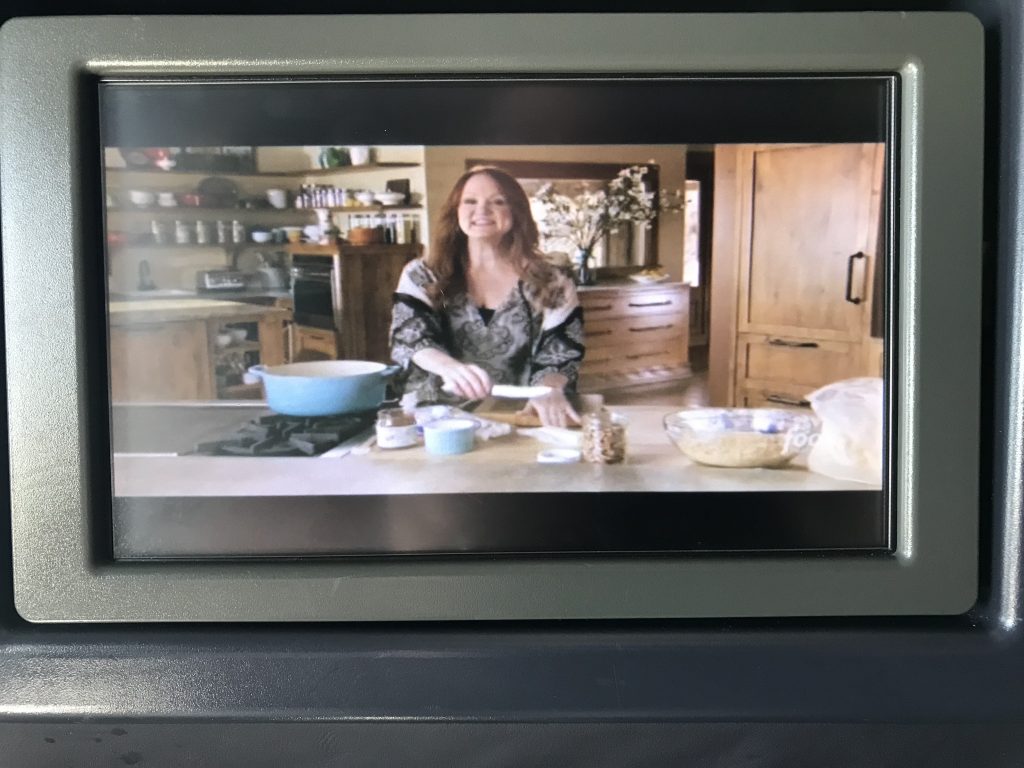 So excited that one of our favorite TV shows, The Pioneer Woman, was available to first-class passengers.

There  we were in complimentary first-class seats, sipping wine while watching Ree Drummond prepare Knock You Naked Brownies. Could this flight get any better?

I felt something brush up against the back on my arm and when I turned to look behind me, there was a sweaty foot resting in the space between Steve’s and my seats. 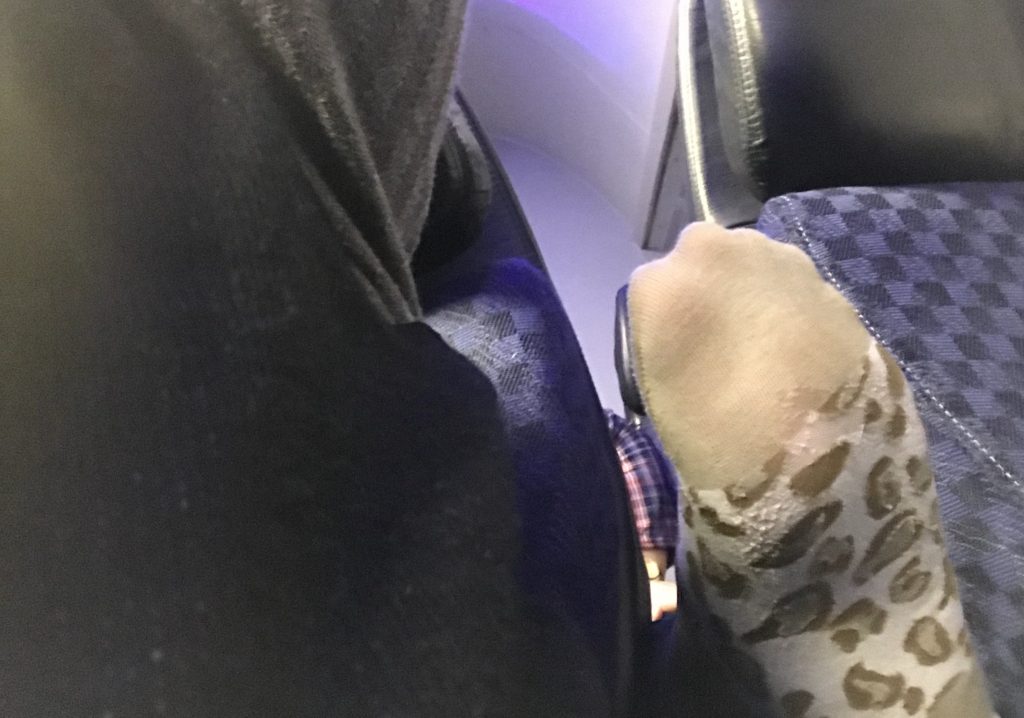 The lady behind us put her dirty sock covered foot right between our seats!

I was shocked (and just slightly horrified)! Who in their right mind thinks it’s OK to take off your shoe and place your stinky foot between the seats in front of you? We’d seen some crazy things on a “PassengerShaming.com” Facebook page before. A lady curling her hair. A family spreading its laundry out to dry. And even a woman eating corn on the cob. 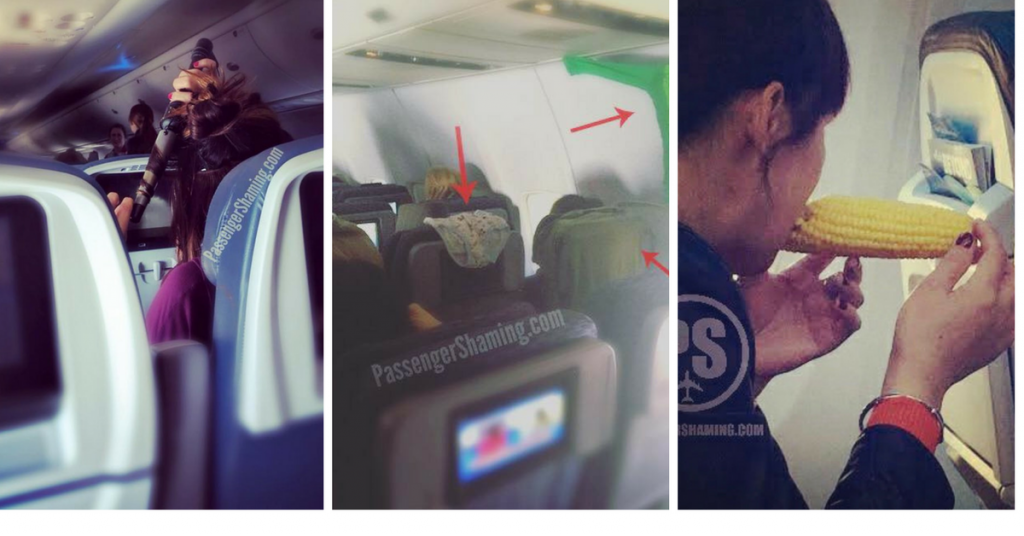 Photos from PassengerShaming.com show people behaving badly on airplanes. L to R: a woman curls her hair, a family hangs its laundry out to dry, a person eats corn on the cob.

But we never expected something like this to happen to us. Neither one of us was quite sure what to do, so Steve got up and nicely asked the woman if she would mind removing her foot from the console in our row. She rolled her eyes at him, and eventually moved her foot. When the fasten seat belts sign went off, Steve and I both got up to stretch our legs and use the bathroom and when we returned, her foot was right back where it was before and she appeared to be sleeping! So yes, I took another picture. 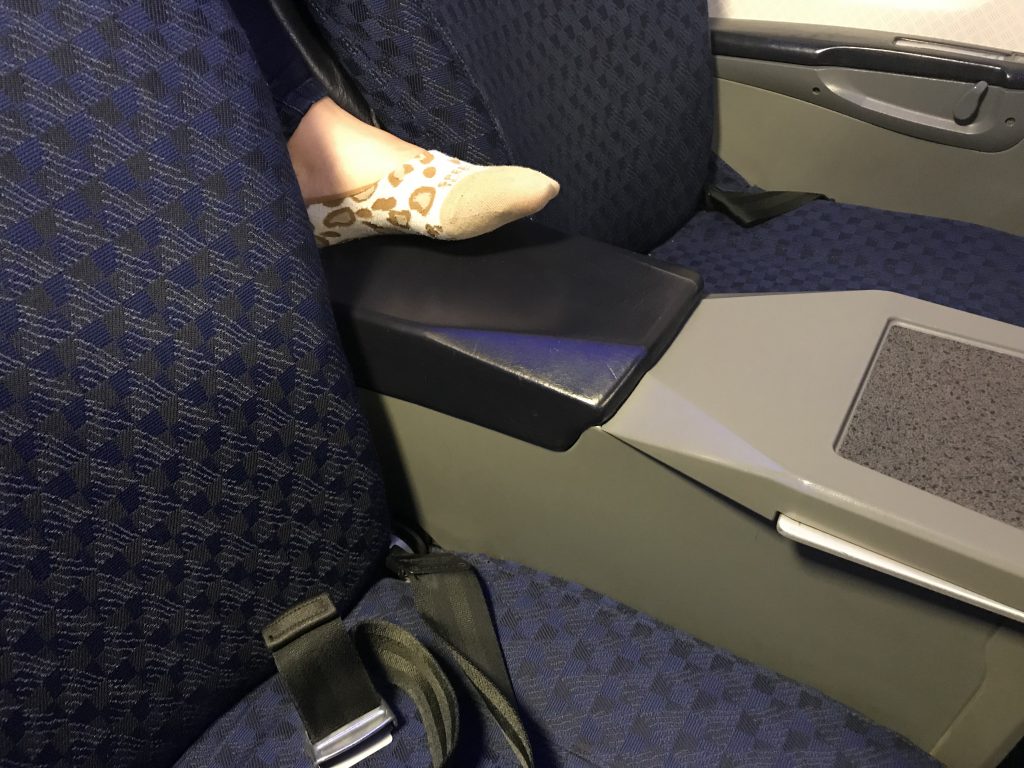 We were aghast that a foot rested on the console between our seats.

Seriously?? I thought Steve was about to explode. Trying to calm ourselves, we ordered another glass of wine, leaned to the outsides of our seats, and tried to focus on Ree mixing brownies.

Then, the sock snapped off!! 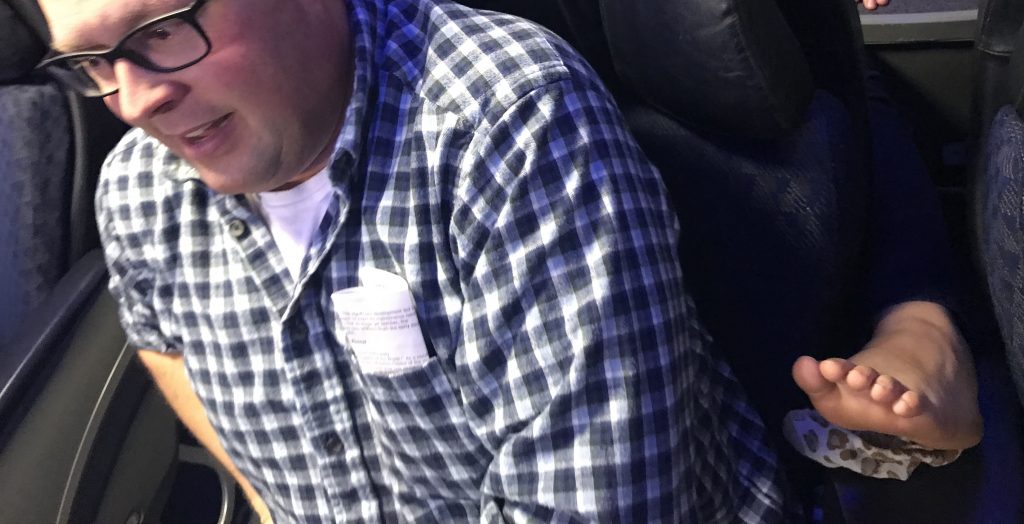 This might be one of the grossest things we’ve ever experienced.

That must have jostled the woman and she awoke, moved her foot back to her own row, but then had the nerve to tap Steve on the shoulder and ask him to hand her sock to her. Then, as if that weren’t bad enough, the unthinkable happened.

We began to hear the click, click, click sound of a toe nail clipper in the row behind us. Was this woman seriously trimming her toe nails on the plane??

Then, the even more unthinkable happened. Just as I was about to take a sip of my second glass of wine in an attempt to slow my ever-increasing heart rate, I lifted my glass just as a small nail clipping landed in my wine! 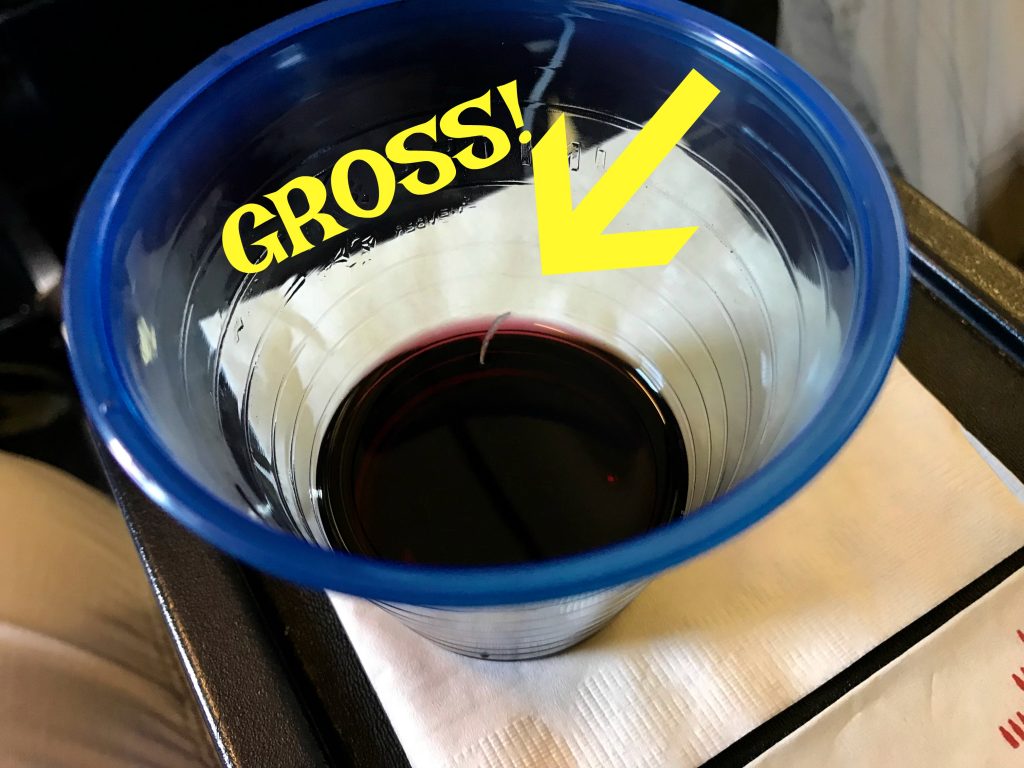 One of the grossest things I’ve ever experienced. A toe nail in my wine!

It is almost impossible to accurately describe what I was feeling at that moment. I’m not sure which was more difficult, preventing myself from lunging into the seat behind me and grabbing the woman by the foot, or stopping my gag reflex.

Blood boiling, I told Steve I was going to turn around and pour the rest of wine on the woman. Steve said, “Wait for me to stand up and you can get a better angle.”

Enough was enough. With the flight attendant no where in clear sight, I decided to take matters into my own hands and

DO YOU SERIOUSLY BELIEVE THIS CRAZY STORY? IF SO, GOTCHA!

Note: Most of this article is made up. Stay tuned next week and we’ll show you the behind-the-scenes of how we did it. As always, thanks for SHARING and not adding any “spoiler” comments on social media. 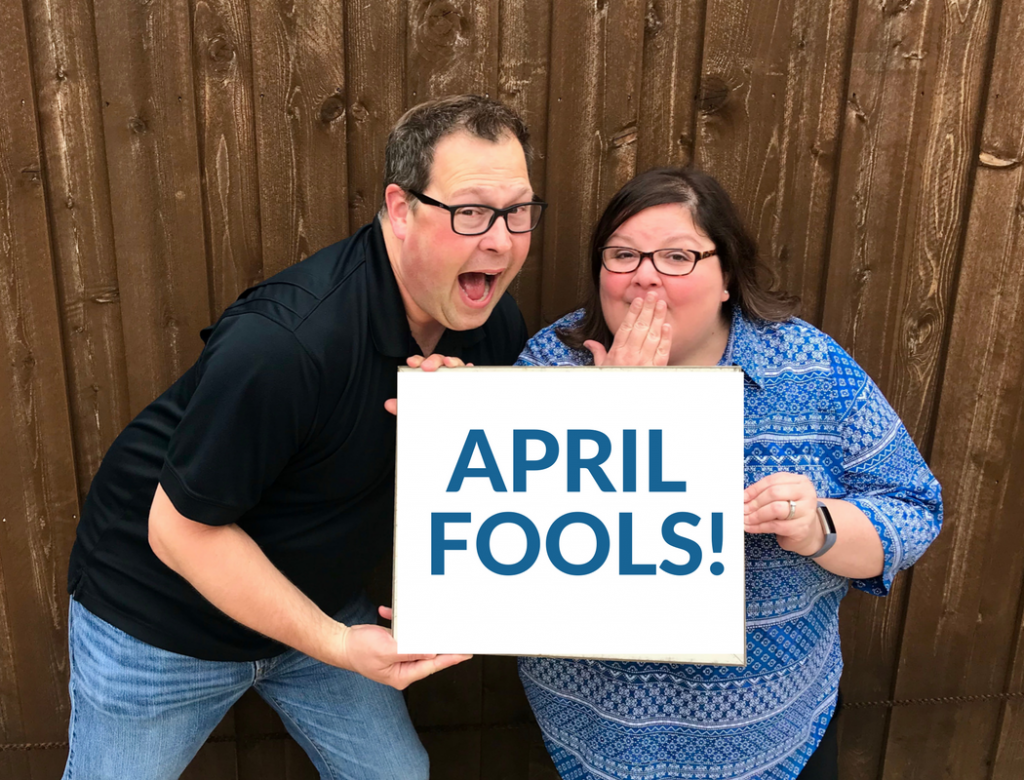 As always, thanks for SHARING and not adding any “spoiler” comments on social media.