Why fans of “The Music Man” need to visit Mason City, Iowa 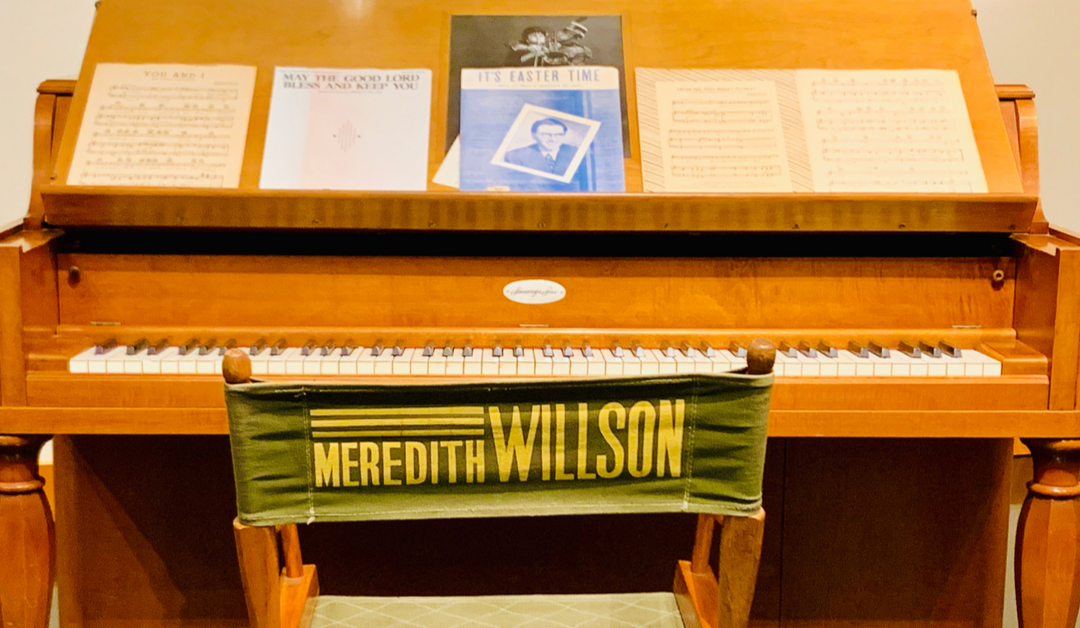 If you’re a fan of “The Music Man” like I am, you are beside-yourself-excited at the thought of seeing Hugh Jackman bring Harold Hill back to life on Broadway in 2020. But before you head to the Big Apple to see the show, you should first visit Mason City, Iowa, where creator Meredith’s Willson’s story began. We actually think you’ll find the folks there pretty friendly, and not too Iowa stubborn.

Willson, creator of “The Music Man” was born in Mason City in 1902 and spent his youth there. A lifelong lover of music, he went on to study at Juilliard. He then was the principal flautist in both John Phillip Sousa’s band as well as the New York Philharmonic. Through all that, though, he never forgot his childhood and the excitement of the Wells Fargo wagon coming to town. 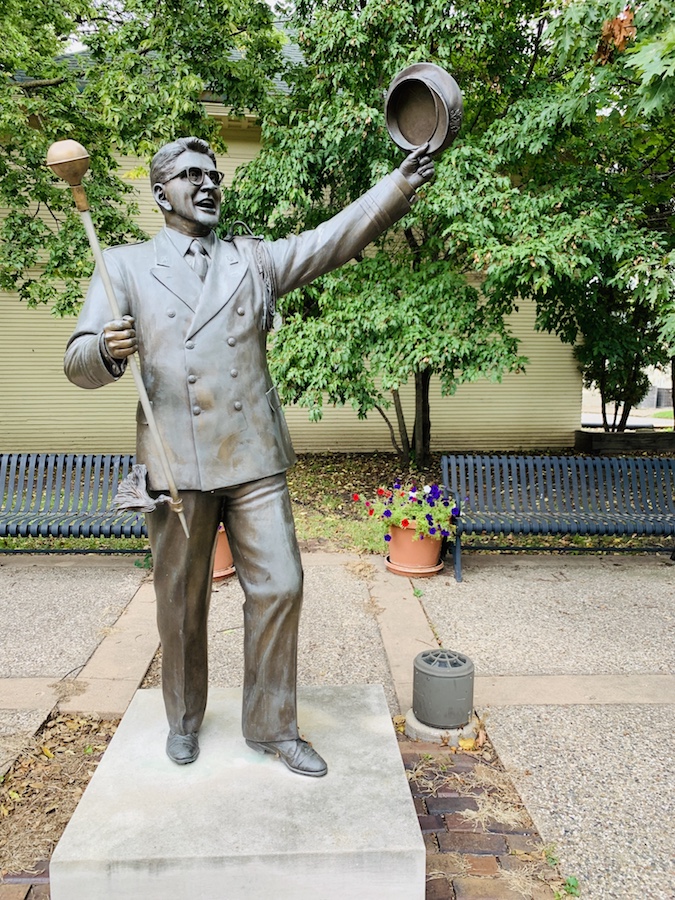 Willson began composing music in the 1920’s, including other broadway musical like “The Unsinkable Molly Brown” and “Miracle on 34th Street — The Musical.” 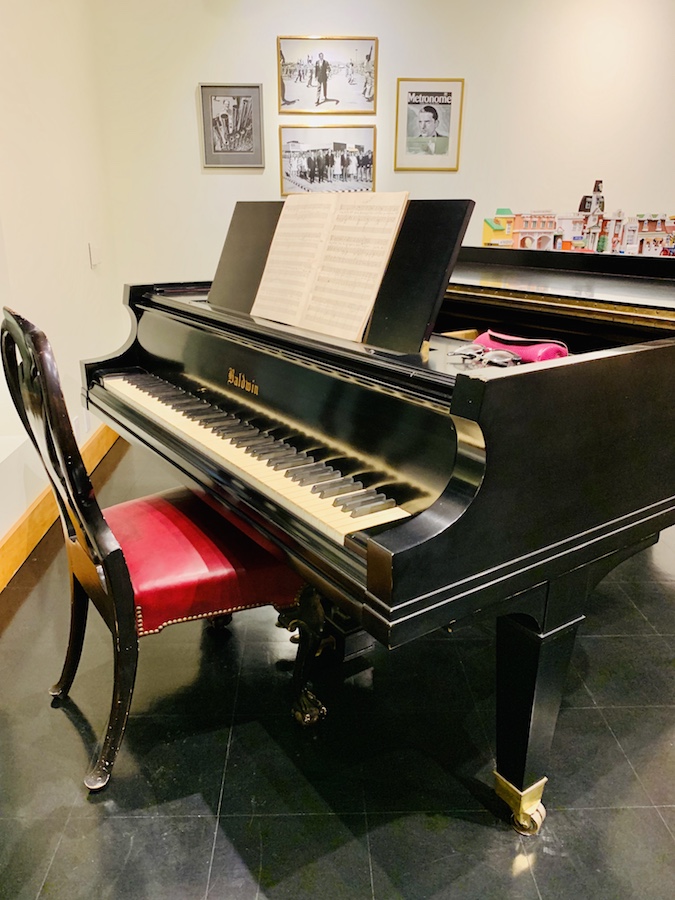 Willson’s childhood in Mason City, Iowa, inspired the fictional town of River City, where “The Music Man” takes place. Today in Mason City, you can visit The Music Man Square and take a walk down Main Street of an early 1900’s River City replica. It’s so realistic, you’ll be looking for Marian, the librarian, around every corner. 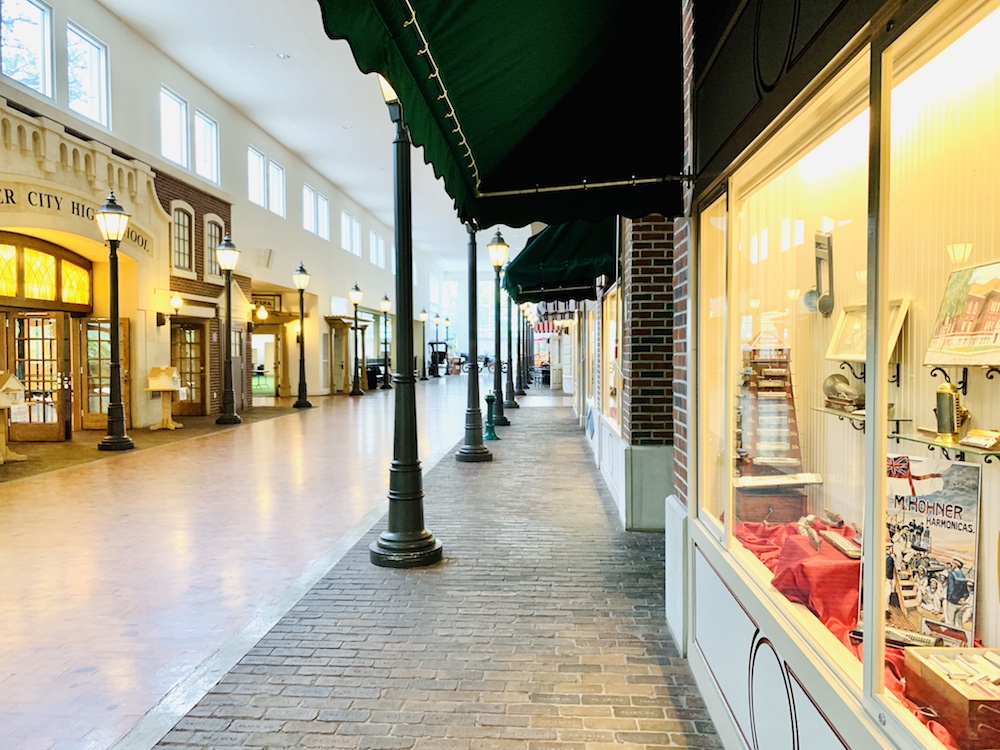 They’ve gone to a lot of work to be sure to be true to the show and the details in it. And because of that, when you walk down the brick sidewalks, you really can imagine yourself out for a stroll in River City. One of my favorite pieces in the museum was the double-belled euphonium. I mean, have you ever seen one of these? 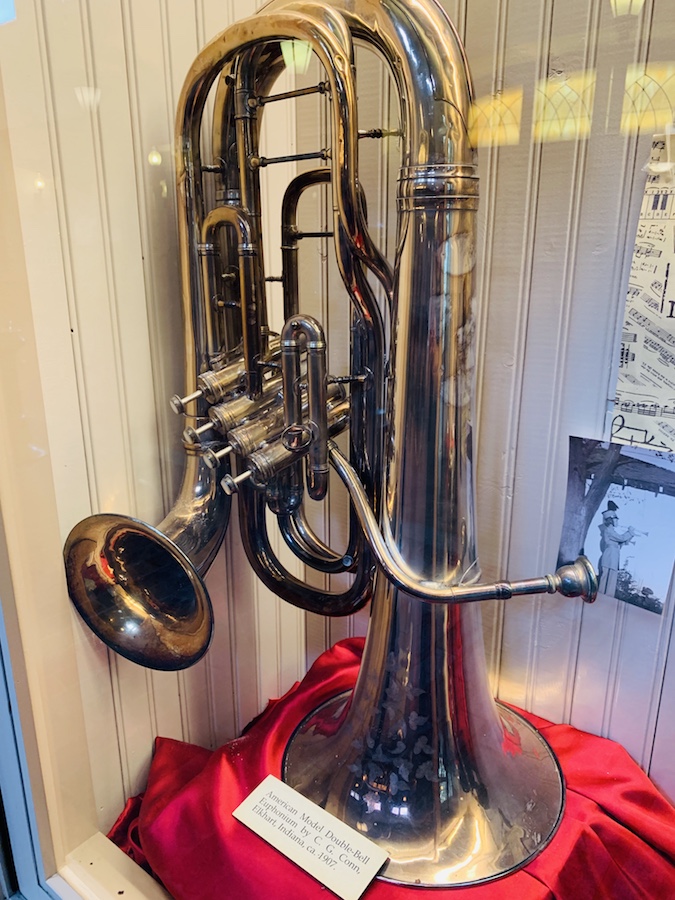 But that isn’t the only instrument on display. Indeed, they also have big bassoons, as well as clarinets of every size. What’s more, there are trumpets on which trumpeters could improvise…yes, even a full octave higher than the score!

Peek in the pool hall windows

Even more fun for me was the chance to stop and peek  through the window of the billiard parlor at the pool table. Yes, this is the very pool table that’s the cause of all of River City’s Trouble. That’s trouble with a capital T and the rhymes with P and that stands for pool! Yes, take one look at the table through that window and you’ll remember why the town was so desperate to have Harold Hill organize the River City Boys’ Band. Have you ever seen depths of degradation like this? 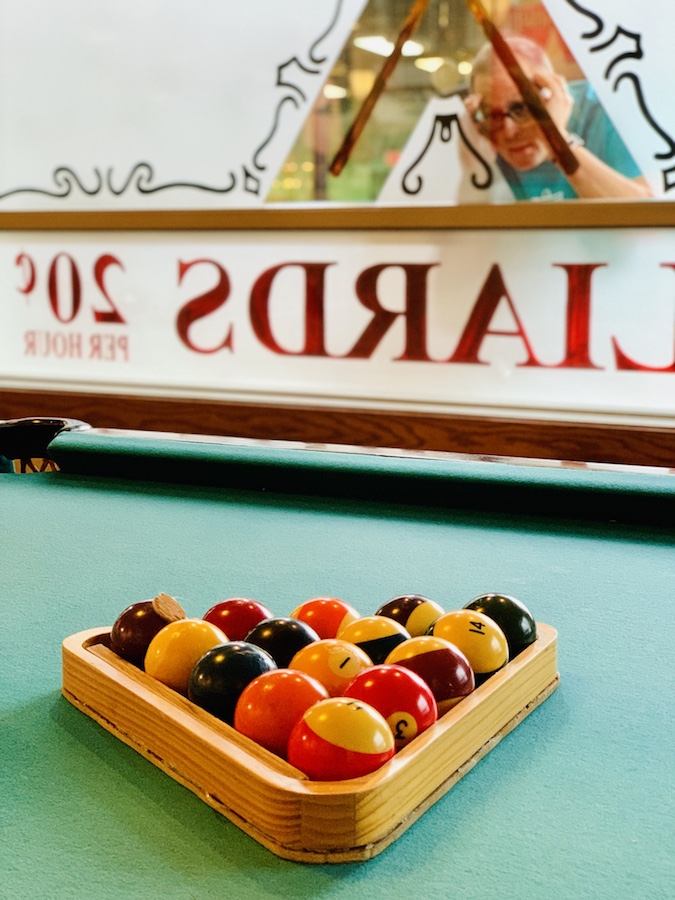 Next door to The Music Man Square is Meredith Willson’s boyhood home. Normally available for tours, it is closed right now for renovations, but should re-open soon. We had the chance to tour it a few years ago, and will say that it gives a little more insight into Willson’s early days. Who knows, when you visit, you might even find a copy of “Captain Billy’s Whiz Bang.” 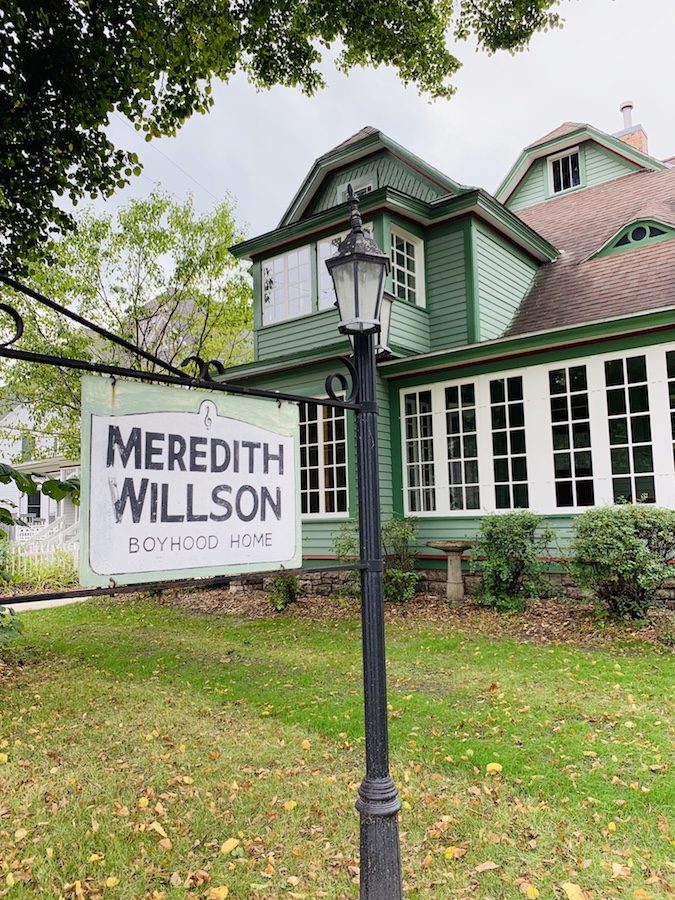 Walk across the footbridge

After you finish your tour at The Music Man Square, head over to the Meredith Willson footbridge. This is the footbridge that we suspect inspired the famous love scene from the musical and the song, “Till There Was You.” And even if you don’t know the musical that well, you should still take a walk on the bridge, as the view from it is beautiful. 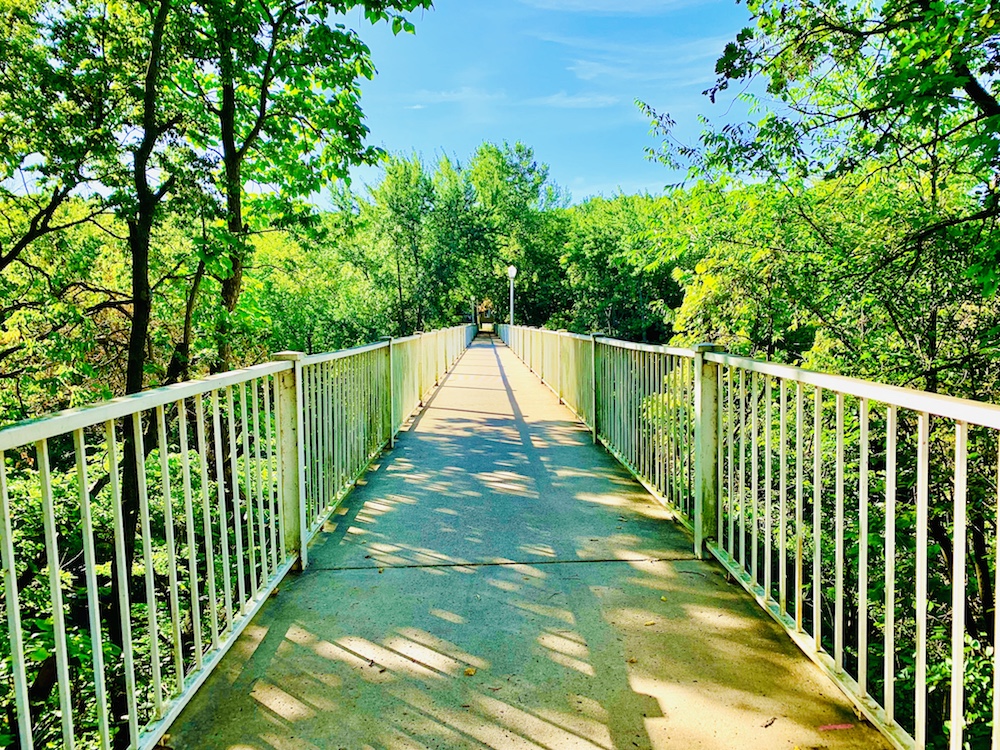 You should know going in that Mason City takes its band music seriously. In 1928, they organized a band festival to honor the town’s 75th anniversary. In 1936, they held another, and it was so nice, they repeated it the following year. In fact, it has run every year since then except during WWII. I don’t think that 76 trombones lead the big parade each year, but do know that today it brings about 60,000 people to town to see dozens of bands march down the street. 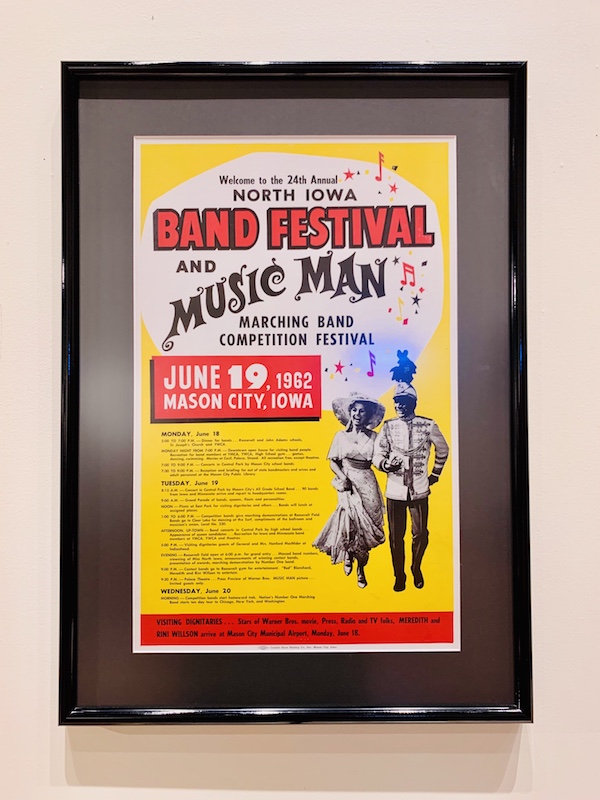 There is one more stop to make while remembering The Music Man in Mason City. You can pay your respects to Meredith Willson, who, after a long career that ran from Broadway to Hollywood and back, came home to rest. His gravesite at Elmwood St. Joseph Cemetery is a peaceful place for a man who brought so much joy to so many people. 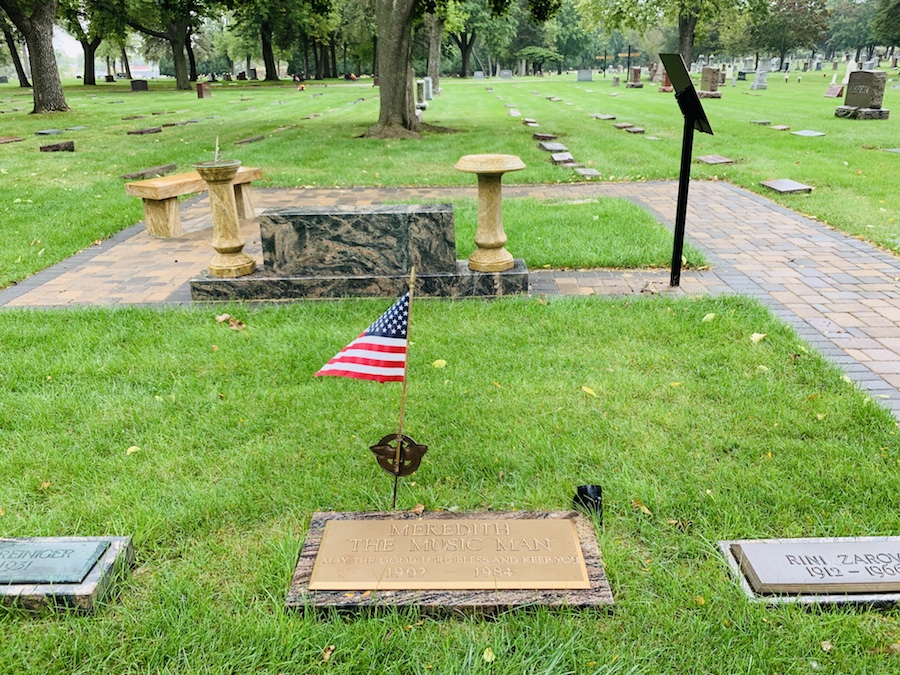 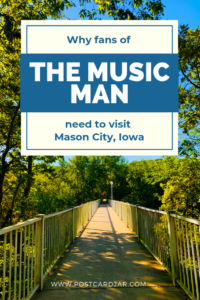