After two years of waiting, we’re finally going to board the Celebrity Edge! 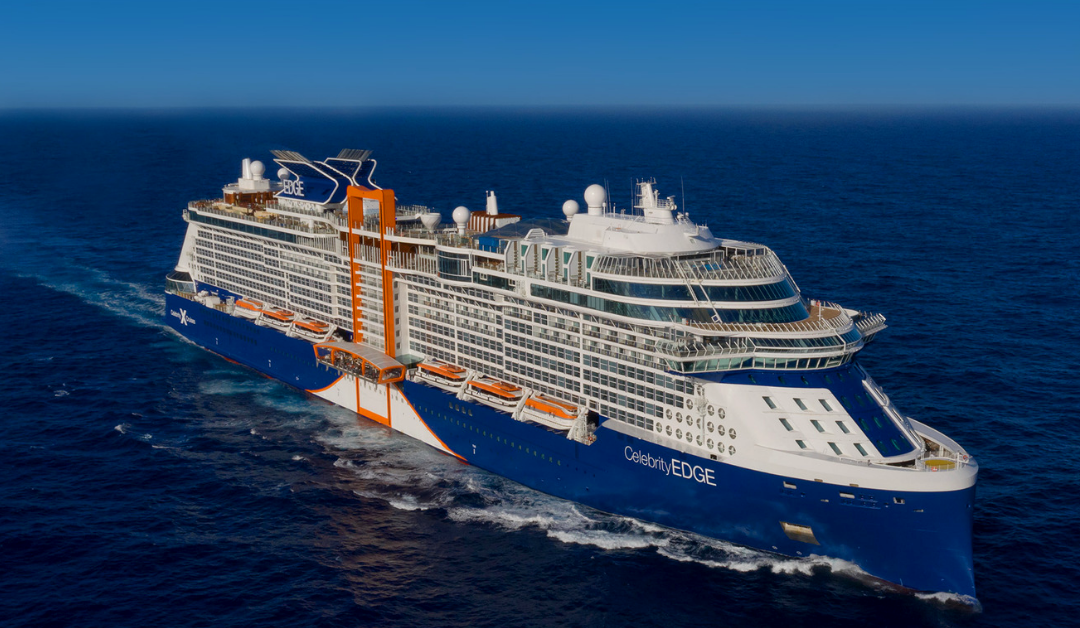 If you’ve spent any time with me, you know that if you say the word “cruise,” I’m likely to pull out my laptop and start helping you find one to book. I am crazy addicted to cruising, because cruises are, well, the best vacations ever conceived by humankind. 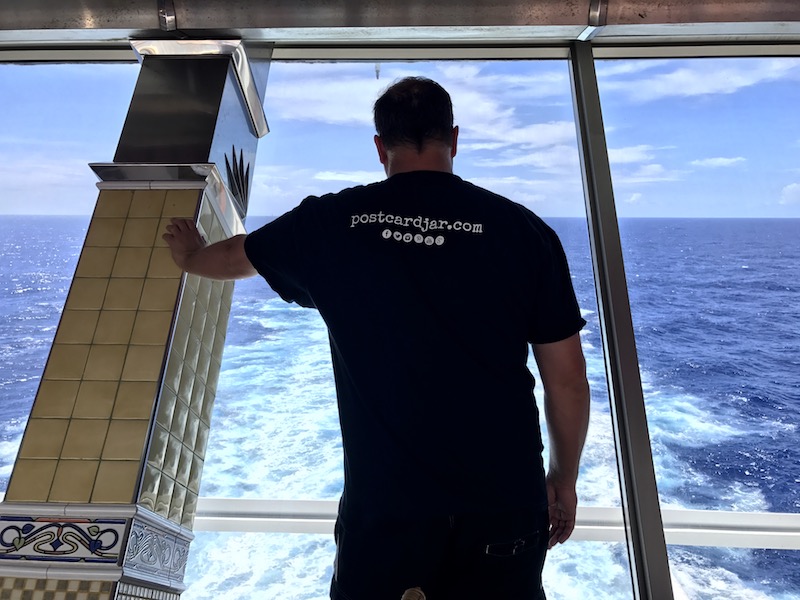 I love nothing more than to just watch the wake while cruising.

To me, cruise ships are like moving world class resort hotels. They take you from place to place and you only have to unpack your suitcase once. I love the fact that most of our travel expenses are paid upfront and almost everything’s included. There are many wonderful choices available for dinner and entertainment. You don’t take a chance on a bad hotel, or have to find transportation to get where you want to go. Cruise ships have it all.

We saw four Celebrity Cruises ships in port at the same time in St. Maarten .

If you’ve read our blog at all, you know that I’m especially fond of Celebrity Cruises. The accommodations, food, beverages, and service are second-to-none. We’ve cruised six times with Celebrity, though honestly, if money were not an issue it would 600 times.

The new Edge Class of ship

About two years ago, Celebrity announced it was building a new ship, called the Celebrity Edge. The Edge would be a totally new design, created from the water up. Celebrity and its designers re-imagined everything on this ship. Balcony rooms are totally re-designed and there is a giant, movable platform on the side of the ship. That feature, called the Magic Carpet, is like a giant elevator and has different functions at each of its stops. 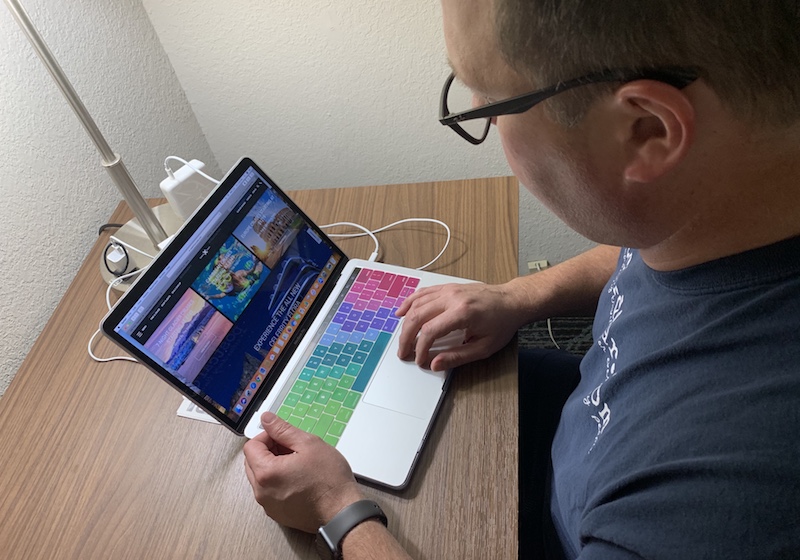 To say I was intrigued is an understatement. Ann and I talked about the new ship and booking a cruise when rooms became available. For months, I watched the internet intently, desperately seeking any piece of information I could find about the then, nonexistent ship. In early 2017, and as soon as I heard the date that cabins would be available for booking, I contacted our travel agent. I’m glad we booked early, too, as the price for our room has more than doubled since we secured our reservation almost two years ago.

But first, the ship had to be built

Finally, construction of the ship began at the STX France shipyard. Ships today are built in parts, called blocks, and then those blocks are fitted together. Here is a picture of some of the first blocks of the Edge being laid in the ship yard. Once put in place, the pieces are welded together so that the ship’s hull becomes one solid piece of steel making it exceptionally strong. 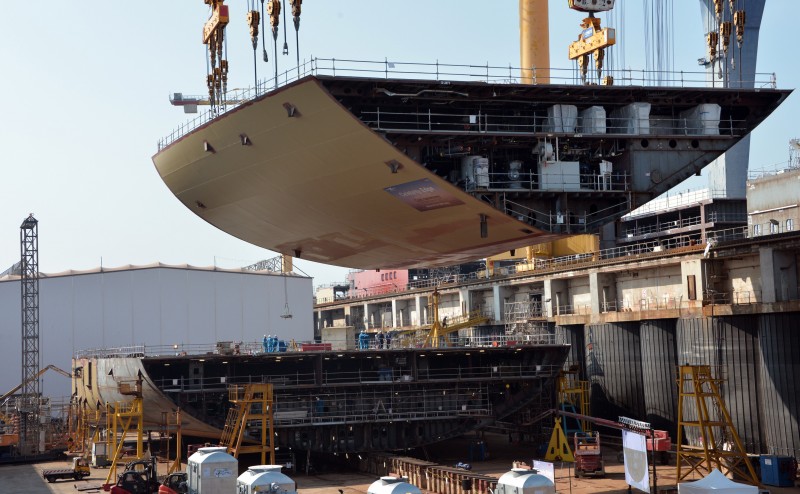 The first block marking the next phase of Celebrity Edge’s evolutionary design is lifted during the Keel Laying at STX France. (Photo Courtesy of STX France – Bernard Biger)

As the shipbuilders put more and more of the blocks together, the ship takes shape. The ship is built in a large dry dock, which is a place the ship sits out of water, but that can be filled with water at the right time to launch the ship.

The float out of the Celebrity Edge

For weeks, I watched videos like these because that’s all I got to see.

The fitting out of Celebrity Edge

Just because the ship has been floated out, it doesn’t mean that it’s ready to go. While the Edge was floated out in late January of 2018, it still had to be “fitted out” or finished. On a ship this large, workers needed almost 11 more months! During this time, I combed the internet and cruise boards for any photo or information that I could find. My excitement and anticipation built with each new glimpse of the ship I had. 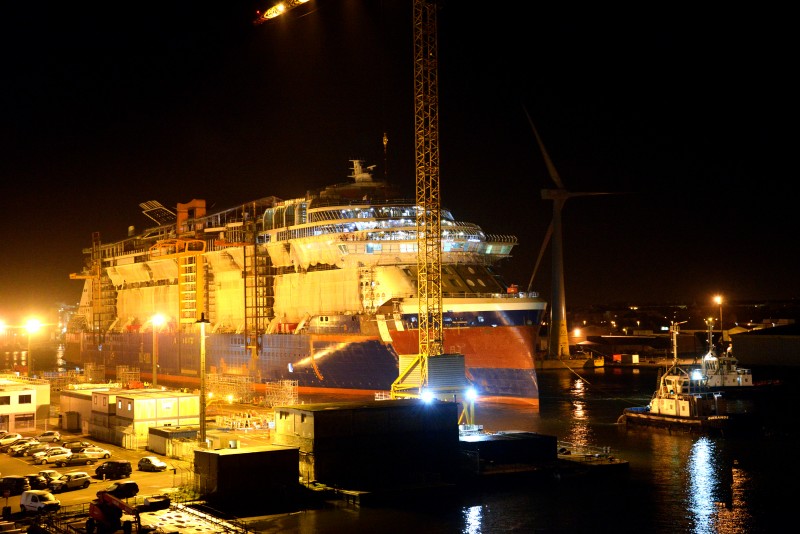 The first block marking the next phase of Celebrity Edge’s evolutionary design is lifted during the Keel Laying at STX France. Photo Courtesy of STX France – Bernard Biger

Finally, the build was complete, and on November 4, 2018, the $1 billion Celebrity Edge set sail from its builder in France for Fort Lauderdale. I watched social media daily and tracked its progress across the ocean. It arrived at the port in Fort Lauderdale November 19, 2018, and began a series of preview cruises before its first few regular runs. 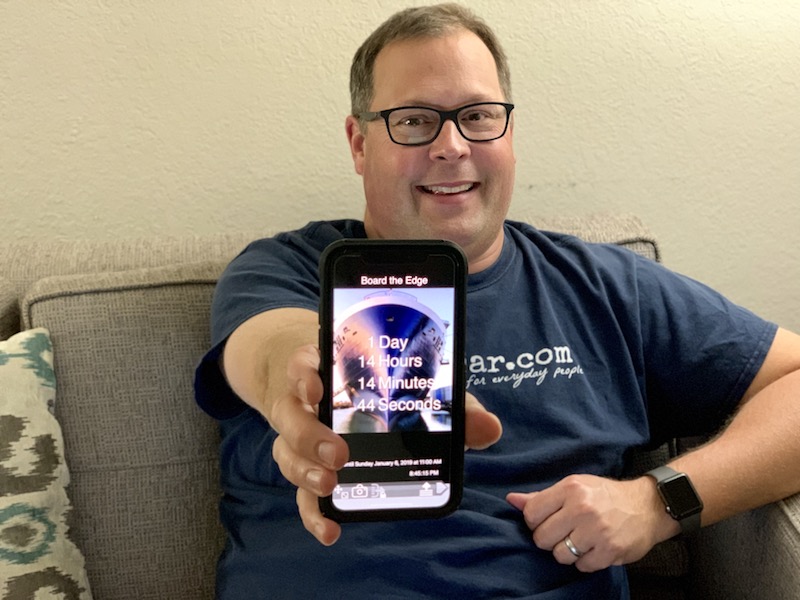 I’ve had a countdown on phone for almost two years.

Tomorrow, my long wait is over and Ann and I will board the Celebrity Edge for a Western Caribbean cruise. After two years of saving, planning, and dreaming about boarding the Edge – I can hardly wait to see her. 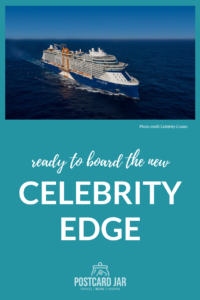