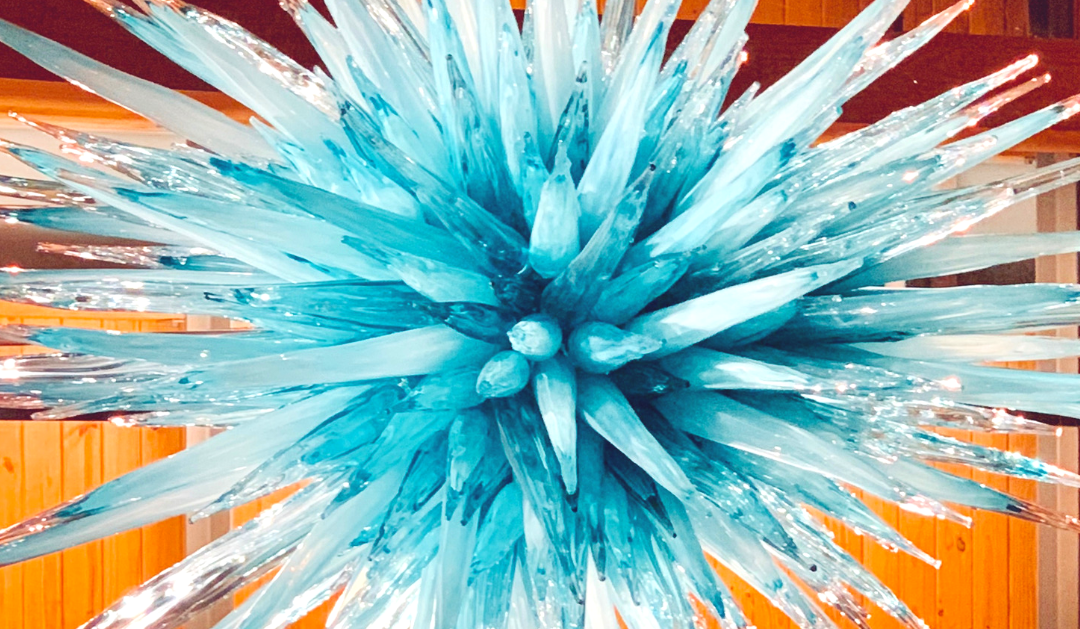 When my mom told us we needed to visit the Crystal Bridges Museum of American Art in Bentonville, Arkansas, I have to admit, Steve and I both felt a little skeptical. It was a museum we didn’t know much about, nestled in a wooded area in a smaller city in northwest Arkansas that is mostly known for being the birthplace of the giant retailer Walmart. We both enjoy art museums, though, and figured as long as we were driving near Bentonville, we’d stop for a bit and a check it out.

I’m not even sure how to transition into what we found there, other than to just say it blew our minds! 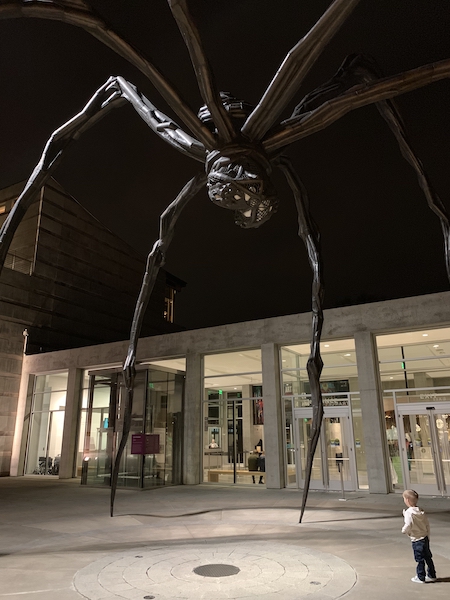 Starting with the giant spider sculpture at the entrance, the museum was nothing like what we expected to find in a town of 49,000 people in the hills of the Ozarks. We can honestly say that Crystal Bridges is not only one of the best art museums we’ve seen in the U.S. but perhaps among the best in the world. The museum’s permanent collection includes American art from five centuries ranging from the Colonial era to the present. It brings to light the diversity of the American spirit and effortlessly melds the art with the beauty of the nature that surrounds it. 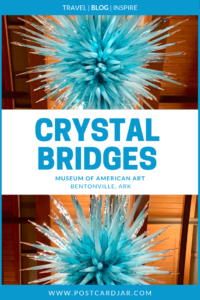 And it’s all free. That’s right, the museum has no admission charge. This treasure is, instead, available to the public due to the incredible generosity of the Walton Family Foundation.

Because of the cold and rainy weather the day of our visit, we didn’t explore the trails or art outside. We’ll definitely plan a return trip for that, though. I could go on and on about this museum, but perhaps it’s best to let the art tell the story of our experience, starting with the architecture.

First of all, the museum itself is a work of art. Architect Moshe Safdie created a gorgeous building that beautifully nestles into its natural surroundings. It just looks like it belongs there. We loved the layout inside, as well, as there was a clear path through the art. So often, art museums we visit are in buildings that once had a different purpose — maybe a palace or government office building. As such, you never know which way to turn to make sure you see the entire collection. Not at Crystal Bridges. Everything is laid out so well and there’s a definite flow to make sure you see as much of the museum as possible. 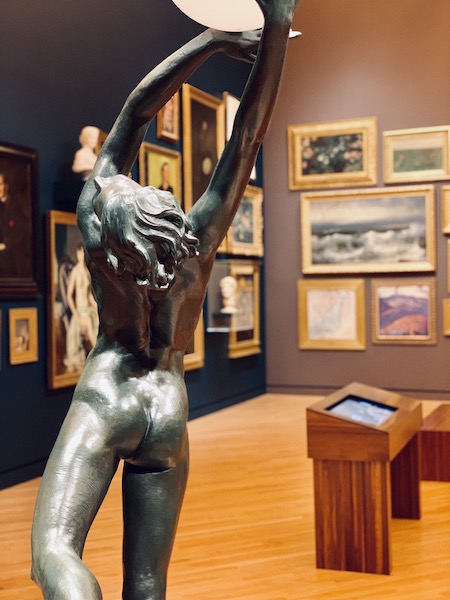 Another architectural feature on the property is the Bachman-Wilson House, an example of Frank Lloyd Wright’s classic Usonian architecture. Originally built for Gloria and Abraham Wilson in 1956, the museum moved the home to Bentonville from its original plot in New Jersey when repeated flooding threatened its preservation. 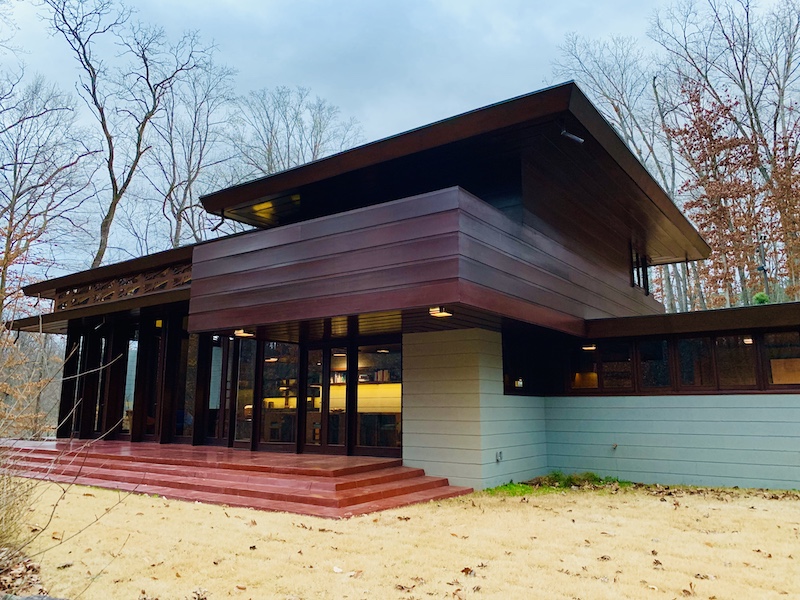 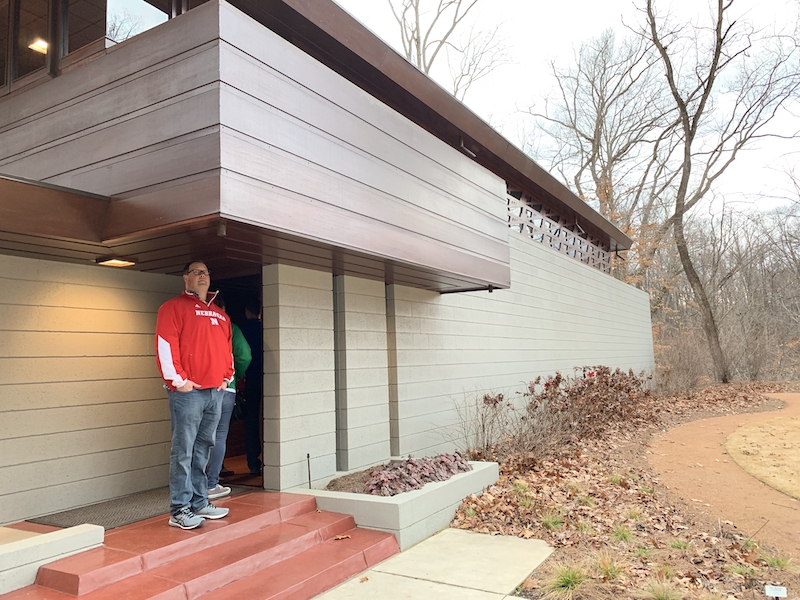 Workers took the entire structure apart and labeled, packed, and moved each component to the Arkansas museum location. There, in 2015, workers carefully reconstructed it. Admission to this special house is free, but you do need to book a ticket for a self-guided tour. You can also take a guided tour for $10. Both tours should be booked in advance on-line. Photographs are not allowed on the inside the house. We took few snapshots of the outside, including the one above to show how short the ceilings are. Our guide told us Wright deliberately made the porch and entry feel closed in, so visitors would quickly move inside to home’s main areas.

Dinner on the square

We spent an hour or so at the Bachman-Wilson House and another hour at a special exhibition inside the museum. Quickly, we realized we needed more time. Fortunately, the museum is open until 9 p.m. Thursday-Saturday, so we decided to go downtown for a bite to eat and then come back for more. While you can grab a snack or meal at the museum, we’d heard good things about the food scene in Bentonville, so we decided to go downtown to check it out.

We secured a table for an early dinner at Tavola Trattoria and loved our entire experience there! First, we shared a Sicilian ball appetizer. We couldn’t get enough of this large risotto ball stuffed with house-made bolognese sauce and mozzarella. Steve had a ravioli dish for dinner and I had a delicious Einkorn wheat risotto with shrimp, spinach, and butternut squash. The drinks, dinner, and atmosphere were all divine!

Back to the museum

We returned to the museum at 7 p.m. and found a great parking spot at the later hour. We spent almost two more hours touring the museum in quiet and uncrowded spaces. Here’s just a taste of what we saw. 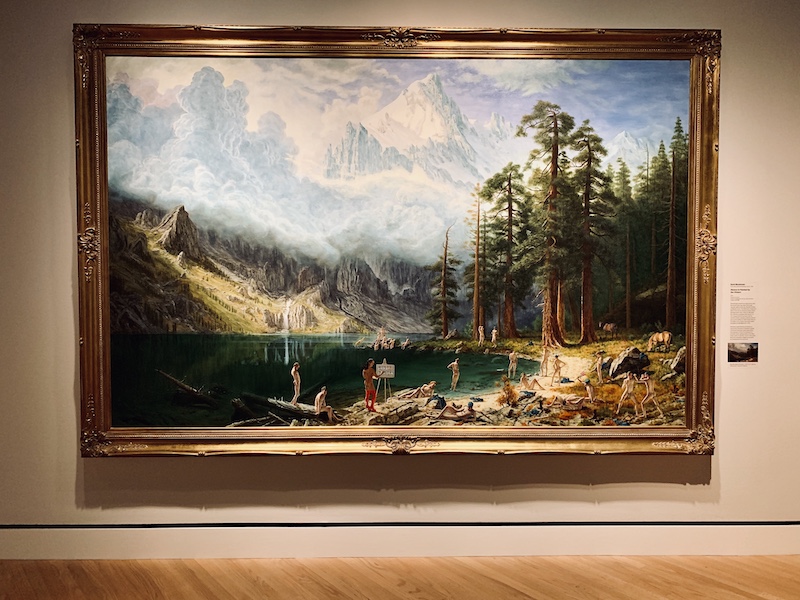 “History is Painted by the Victors” by Kent Monkman | 1965 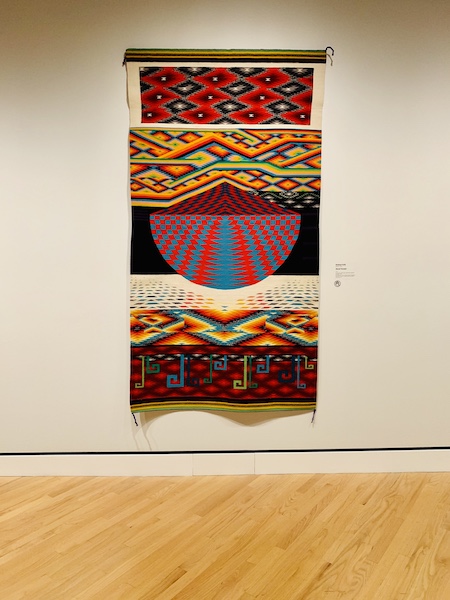 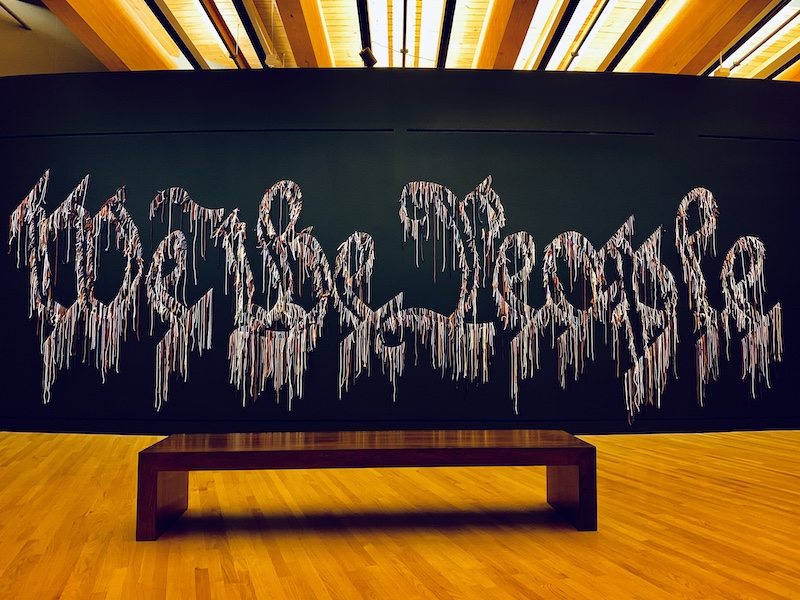 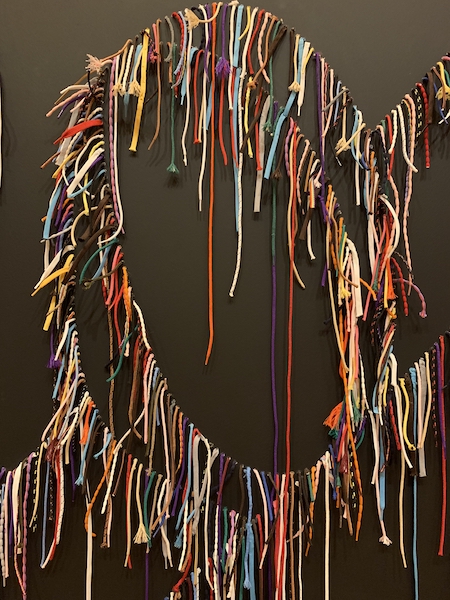 Ward’s piece was 8×27′ and was made of shoelaces on a black backdrop. The laces hang from perforations in the gallery wall. It was stunning. 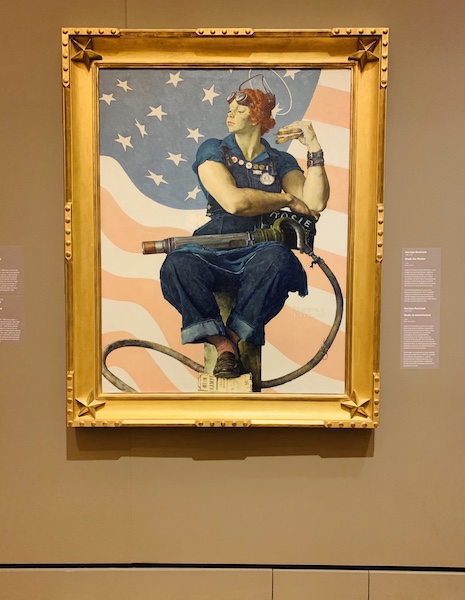 One of the most recognizable pieces of art in the museum is Norman Rockwell’s “Rosie the Riverter” oil on canvas. It is Rockwell’s “iconic image of an American woman employed in the production of military hardware and is a powerful reminder of women’s critical contribution to World War II,” according the signage in the gallery. The image appeared on the cover of the Saturday Evening Post in 1943. 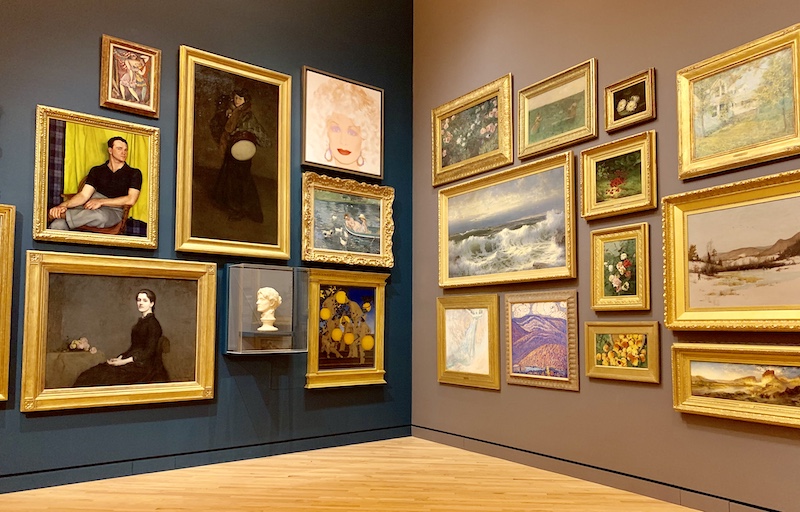 We discovered so many other recognizable works in the museum, as well. We especially enjoyed the gallery pictured above and the juxtaposition of works like Andy Warhol’s “Dolly Parton” and Mary Cassatt’s “Summertime.” There were other really striking areas of the museum, as well, like this one below. 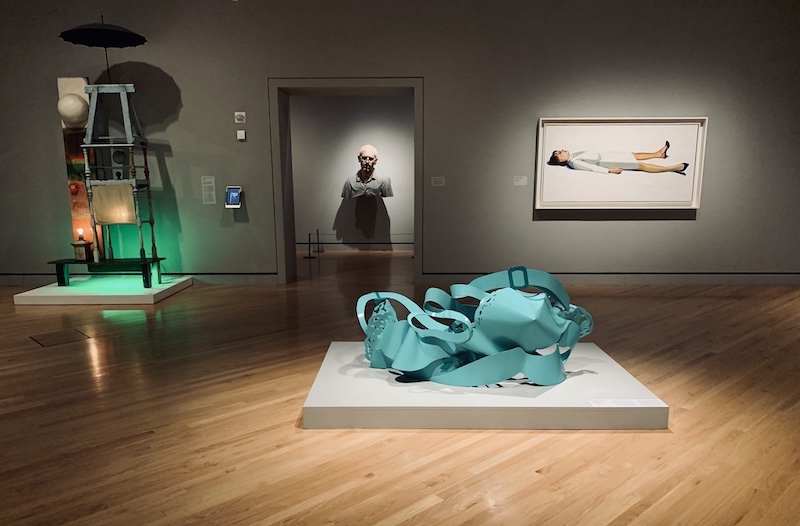 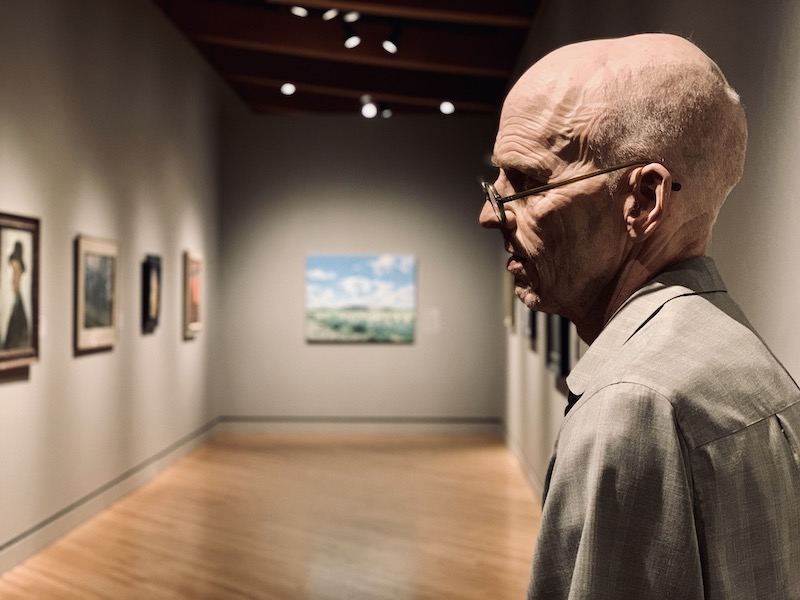 Evan Penny created this piece called “Old Self: Portrait of the Artist as He Will (Not) Be. Variation #2. Made of silicone, pigment, hair, fabric and aluminum, we found this sculpture to be hauntingly realistic. He created this 3-dimensional self-portrait to make himself look decades older. We simply couldn’t stop staring at it. This seemingly blank, gray canvas also caught our eye, especially after a docent told us it was worth millions. It’s called “For Carl Andre.” by Brice Marden. We found ourselves intrigued and wanting to know more. 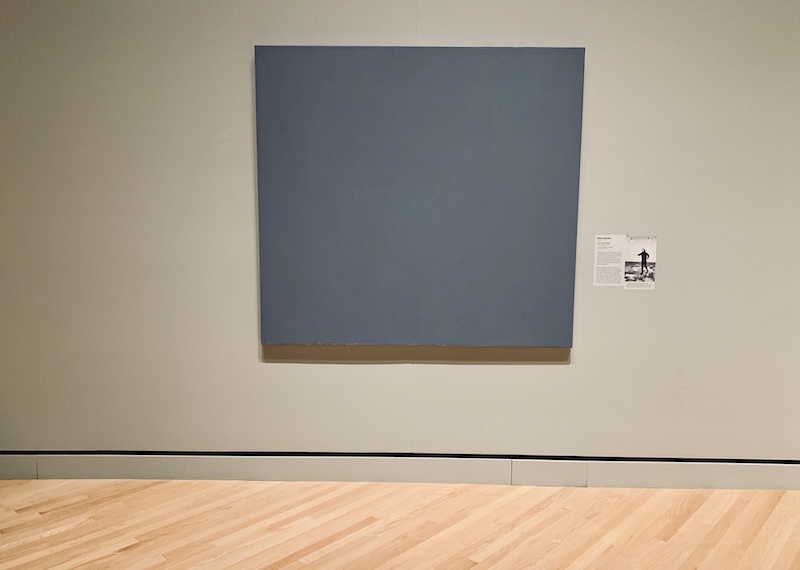 We found interesting works of art around every corner. I really enjoyed spending time in a gallery called “Personal Space” that considered how the “objects we surround oversells with, and the relationships we build tell stories about our lives.” The space below was created by Genevieve Gaignard and is called “Black is Beautiful.” 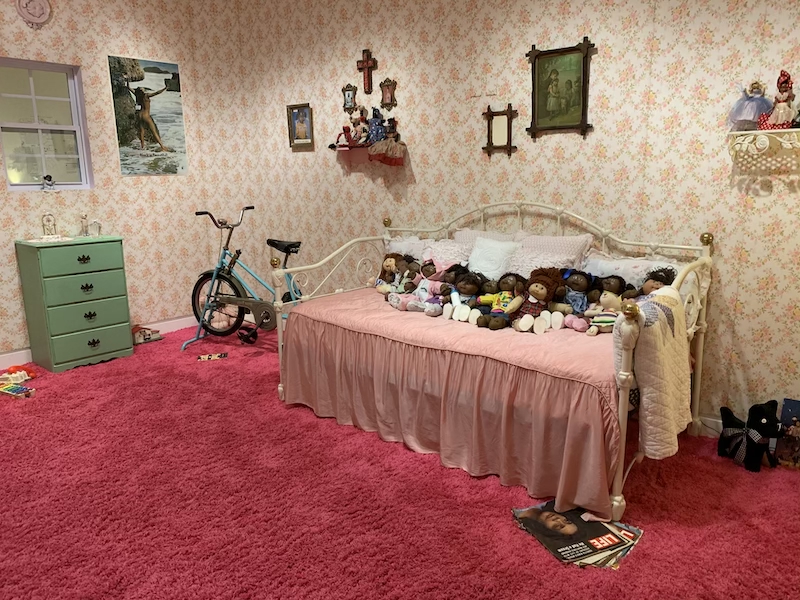 I could on and on about this museum and the art we saw there. But honestly, you just need plan and trip and see it for yourself. I promise – you will not be disappointed.

For even more travel inspiration, just send us your email through the form below.

Looking for a new road trip idea this summer? Look

We are in Rochester, Minn., for Ann’s appointmen

Have you been to the Mayo Clinic? We are back in R

Thank you for your kind words, Gail. They mean a l

🎺 One of our favorite midwest destinations is M

Thank you, @happyhoyt, for this great healthier li

We've had the best time with Steve's mom and dad t

Looking for a new road trip idea this summer? Look

We are in Rochester, Minn., for Ann’s appointmen

Have you been to the Mayo Clinic? We are back in R

Thank you for your kind words, Gail. They mean a l

🎺 One of our favorite midwest destinations is M

Thank you, @happyhoyt, for this great healthier li

We've had the best time with Steve's mom and dad t