Cruise ship etiquette: How to not get labeled “that (annoying) guy” 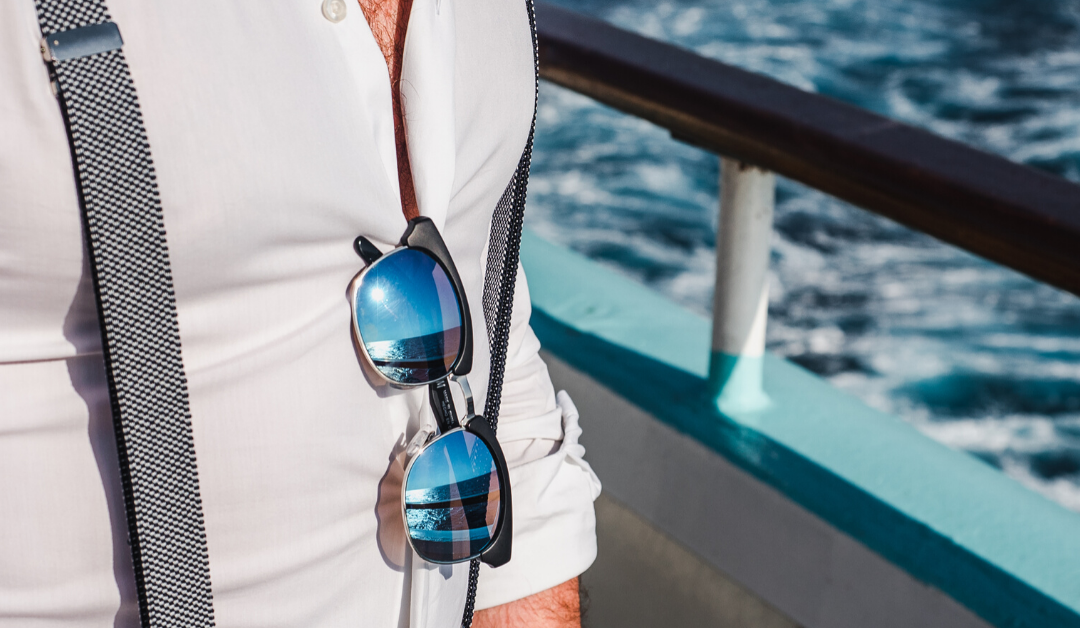 Sometimes people amaze me. On cruises, most folks understand good cruise ship etiquette. Sadly, it seems that each cruise also has “that guy” (or gal) who sucks away the fun just by being there. You know who I’m talking about, right? There’s always that one guy or gal who makes you want to avoid any eye contact for fear it might be seen as an invitation for conversation.

We don’t want you to be, “that guy,” when you cruise, so here’s a guide to cruise ship etiquette. Note: All of the examples used in this post are things we’ve actually seen!

Cruise ship etiquette says to treat the crew with respect

The crew on a ship bends over backwards to serve passengers and give them a good cruise vacation experience. “That guy” lets this go to his head and forgets any manners his mother ever taught him. He becomes demanding, telling crew to “get me a ___,” in a terse voice that reeks of superiority. 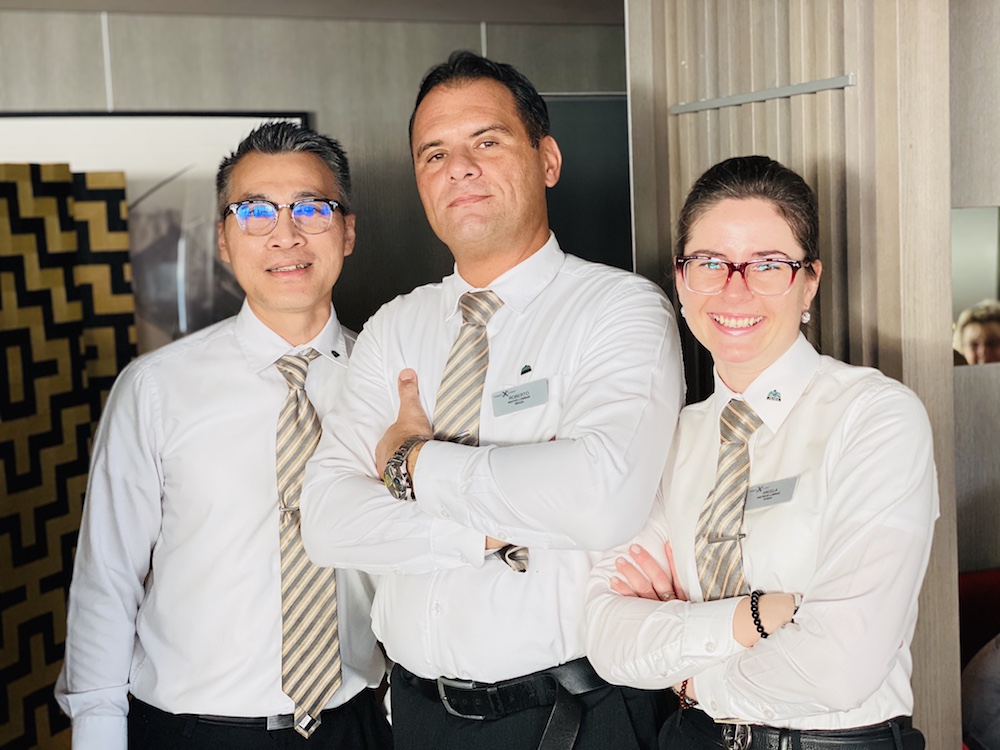 These crew members were three of our favorites on our last cruise on the Celebrity Edge. Nori, Roberto, and Angela were professional waiters and made every meal we had at Luminae special. After doing some research we’ve found that it actually doesn’t cost extra to ask for something nicely. “May I have a ____, please?” will still get a person whatever they want, only it comes with the bonus that they don’t sound like a complete ass while asking.

Let me be clear: You paid a lot for your cruise vacation, and you deserve a good experience. If something is wrong, you should bring it to the crew’s attention so that your problem can be resolved. But let’s face it, life on board is usually pretty good. 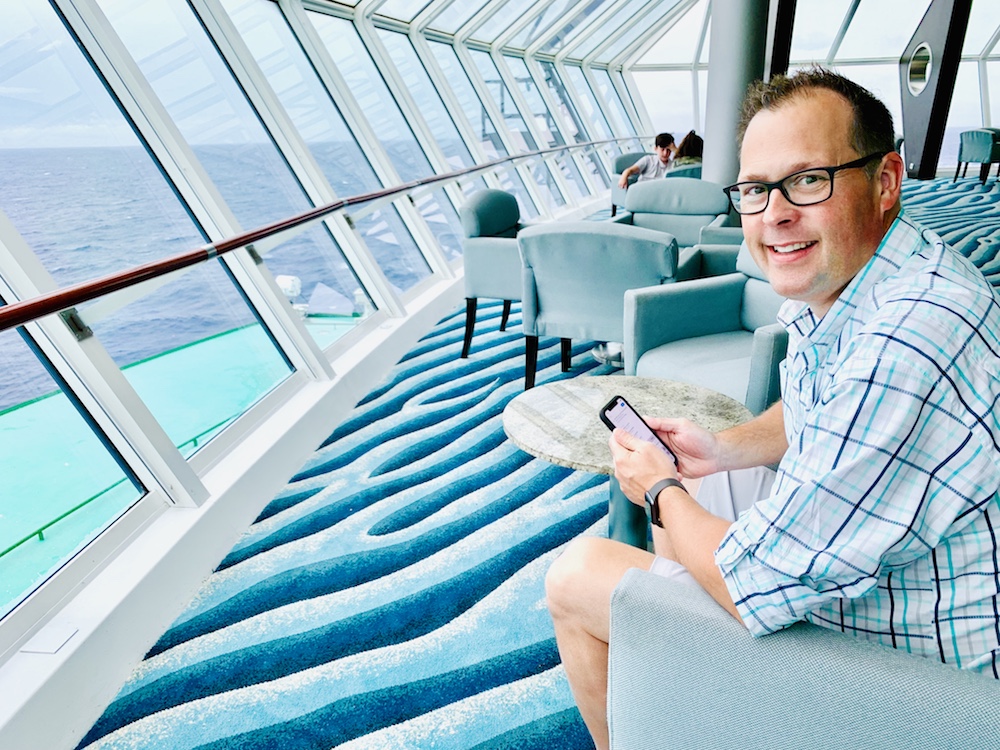 “That guy,” however, doesn’t see it that way. No, he’s a real glass-half-empty kind of dude. He spends his days on the ship nitpicking, looking for little problems that most people would never see. For instance, we once heard “that guy” arguing with guest services about the sound the rain made in the gutter outside his room. We had another guy tell us he was furious that his butler wasn’t available at 11 pm to bring him a scoop of ice cream. (“I only wanted one &*$^% scoop!” he said.)

Good cruise ship etiquette means taking a deep breath, remembering you’re on a beautiful ship in the middle of a gorgeous ocean, and relaxing. It means remembering that your problem is likely minor in comparison to the people back home who had to go to work today.

Cruise ship buffets are popular places. Most folks know they may have to wait in a short line before getting their piece of specialty cheese cut or piling mashed potatoes on their plate. 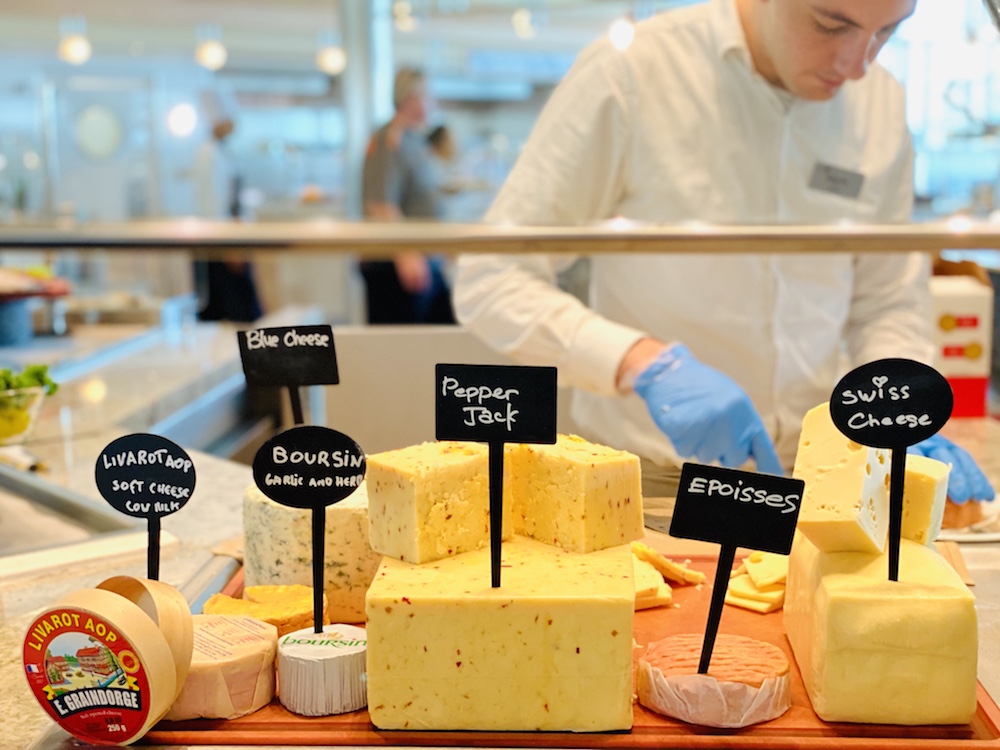 “That guy,” however, pushes in front of the line, grabs the spoon, and digs in. He disregards the folks who have been politely waiting because he is, obviously, far more important than everyone else. He scrapes the last of the bowl of sweet chili sauce onto his spring rolls so that they swim like pancakes in syrup, then turns to a crew member and says, “Hey! You need more of this!” Don’t be that guy.

Call home from your cabin

On our recent cruise, we were relaxing on the sundeck with a cold beverage when a tinny voice on speakerphone suddenly cut across the chill vibe. “That guy” had decided that this was the perfect time and place to have a video conversation via FaceTime. The dozen or so people around him who had been chatting quietly, soaking in the hot tub, or reading their favorite book all rolled their eyes. Instead of continuing to relax, they heard all about “that guy’s” luck at the craps table and the cat litter box problems on the other end of the call. Cruise ship etiquette means that these conversations should be held somewhere private, like a stateroom, and not in a public place like an elevator, pool deck or cafe.

Give up your deck chair when you’re not there

We often get up early and go for a walk on the ship. Somehow, we aren’t too surprised to find “that guy” up early, as well. Only “that guy” isn’t on his way to the gym. No, he’s up early to put a towel over a deck chair in a prime location and secure it with brightly colored clips, before walking away to go back to sleep in his cabin for a few hours. 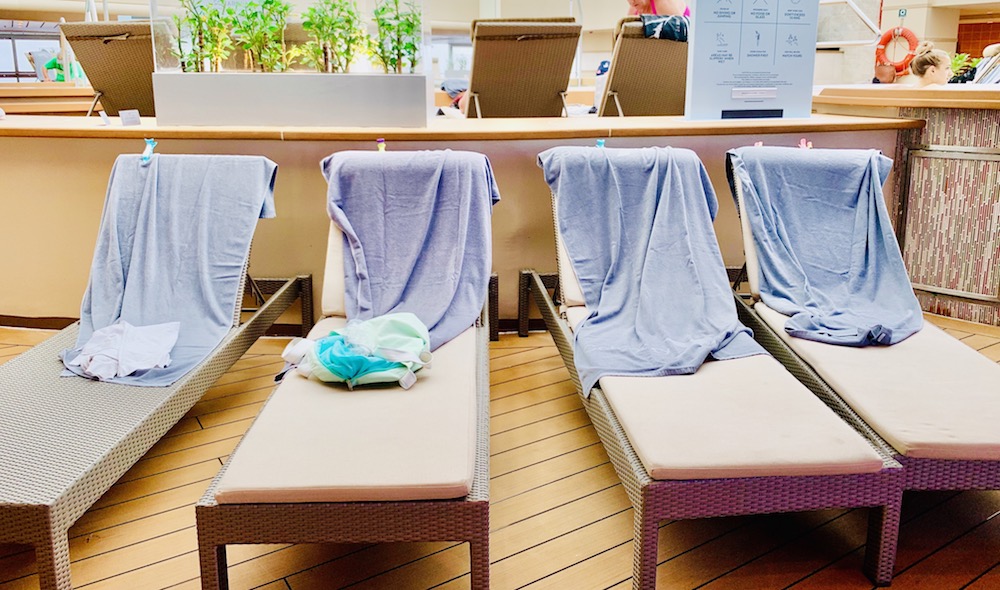 Yes, “that guy” is so self-important that he makes sure that no one else can enjoy that chair, even if he isn’t there to enjoy it himself. Good cruise ship etiquette says that when you leave the pool area for more than 30 minutes, you take your stuff with you. Common courtesy says to let someone else enjoy the chair. If everyone does this, there will be a chair for you when you return.

A cruise ship’s hot tub can be a fun place where you’ll meet interesting people and enjoy great conversation. When “that guy” approaches the hot tub, though, everyone who recognizes him hops right out. That’s because they know that if they stay, “that guy” will regale them with stories about how good his life is. 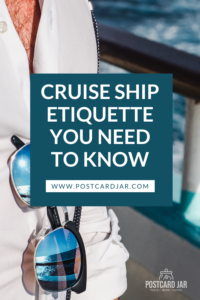 They’ll get to hear all about his two houses, and his two boats (one of them is more of a fishing boat, really, it isn’t a live-aboard). He’ll casually mention his tickets to the Super Bowl. He’ll tell all about how hard he works at his amazing job and how he has to call in from the ship at least twice a day because they just can’t survive without him. Oh, and did he remember to mention (not a big deal, really) that he’s going to the Super Bowl? So to “that guy” I give this social hint: no one cares. Instead, be nice like our friends Adam and Jill. We were always happy to see them in the hot tub because we knew great conversation was ahead. 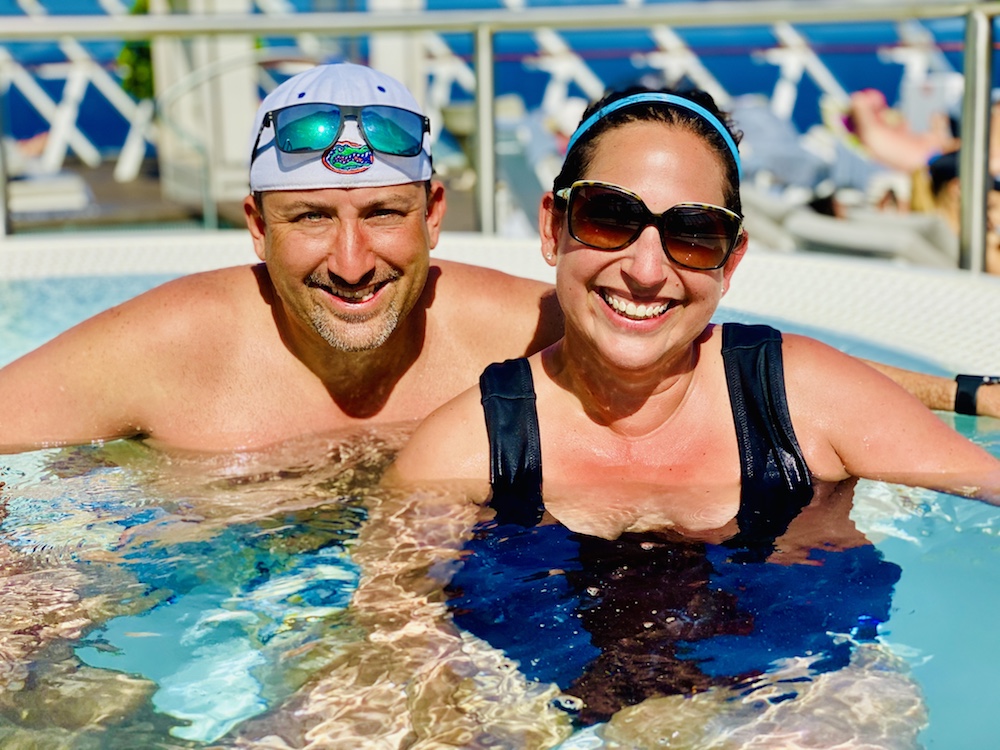 This is one that drives me absolutely crazy. I’ve seen “that guy” go to the bar and try to use his own prepaid beverage package to get a “free” drink for a friend who didn’t buy the package. This is stealing. “That guy” paid for drinks for himself only. He doesn’t get to turn around and give them away to others. For what it’s worth, cruise lines catch on to this behavior pretty quickly, and “that guy” can lose his beverage package without a refund if he’s caught. 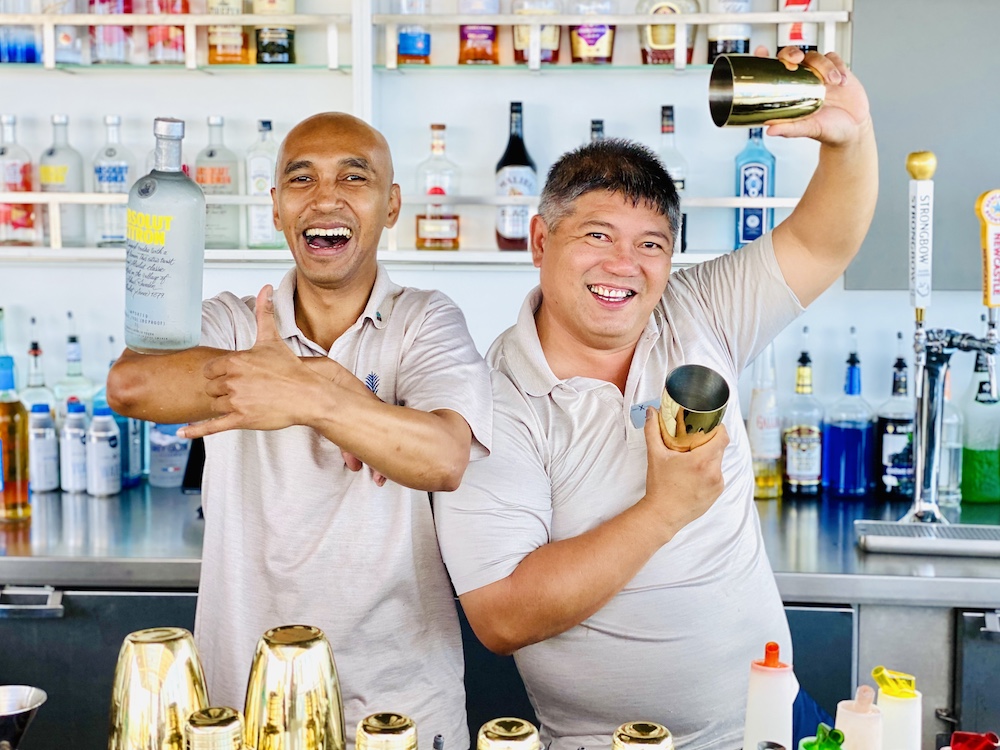 And while we’re talking drinks… Yes, when you cruise, you’re there to have a good time. What’s nice is that at the end of the night, you only have to walk back to your room, so there is no driving involved. It’s okay to have a couple of evening cocktails or that extra glass of wine with dinner and not really worry about it. But “that guy,” overindulges and makes everyone around him uncomfortable. Good cruise ship etiquette means knowing and respecting your limit. 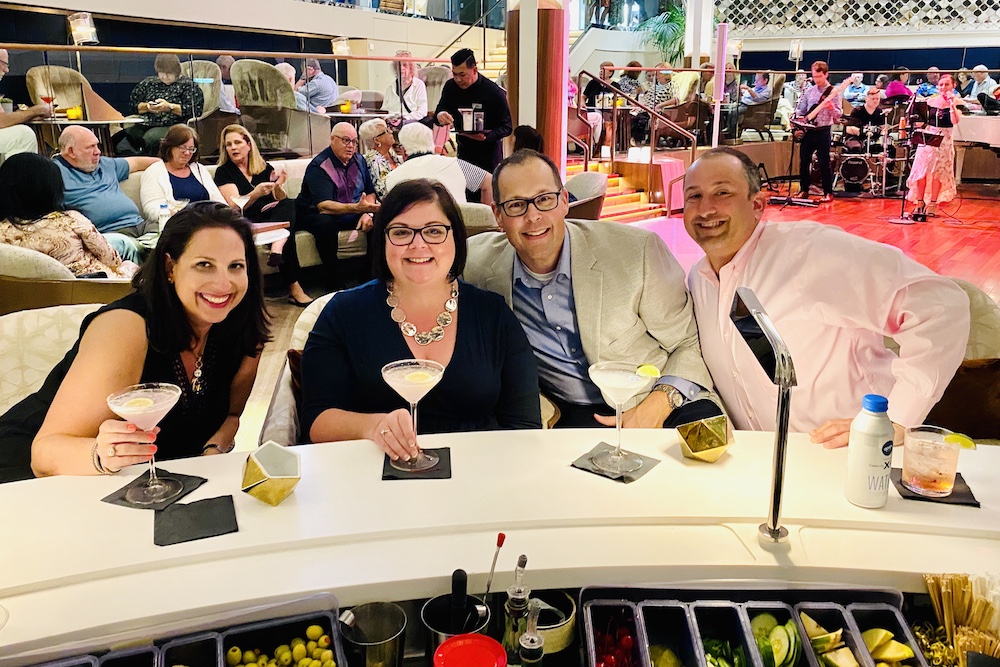 Most folks have learned the basic lesson that you wash your hands before you leave the restroom. But not “that guy.” No, he’s far too important and pressed for time to stop at the sink for a quick scrub. Indeed, he just exits the stall and heads right for the door, causing me, (and others in the room) to gag. We did talk about him behind his back #SorryNotSorry. Cruise ships have lots of people living together in close quarters. The crew work hard to keep public areas clean, but passengers maintaining basic hygiene really helps prevent the spread of sickness, as well. Royal Caribbean even made a nice video to remind people about the importance of washing their hands. (The song will probably get stuck in your head. You’re welcome.)

Be nice to the photographers

Cruise ships have a whole team of photographers who work hard to help you take some memories home with you. At each port, they stand on the pier, sometimes with props and in costume so you can have fun pics. They make the rounds at dinner offering to snap photos. Yes, they are selling the pictures they take, but they aren’t charging you to take them. “That guy” is rude to the photographers instead of just politely saying, “No, thank you.” 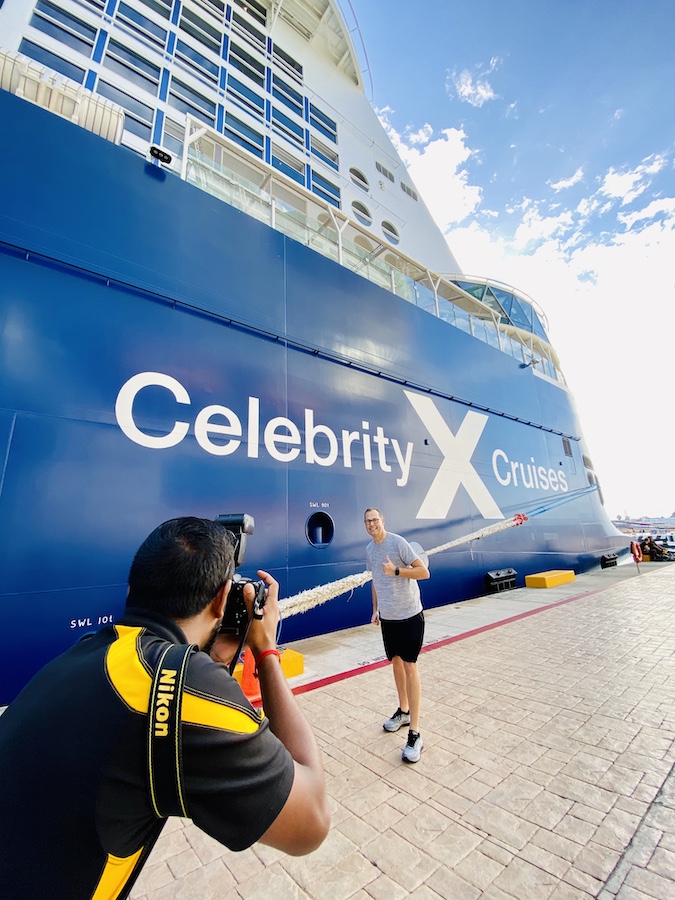 I don’t want this post to scare anyone from cruising because “that guy” is definitely the exception. We just hope “that guy” will see this post and remember that he isn’t the only one on board the next time he cruises.

Have you seen other bad behaviors that make it easy to pick out “that guy?” Let us know in the comments.