Yes, Nebraska has a safari and I’m so glad we finally took the time to stop there 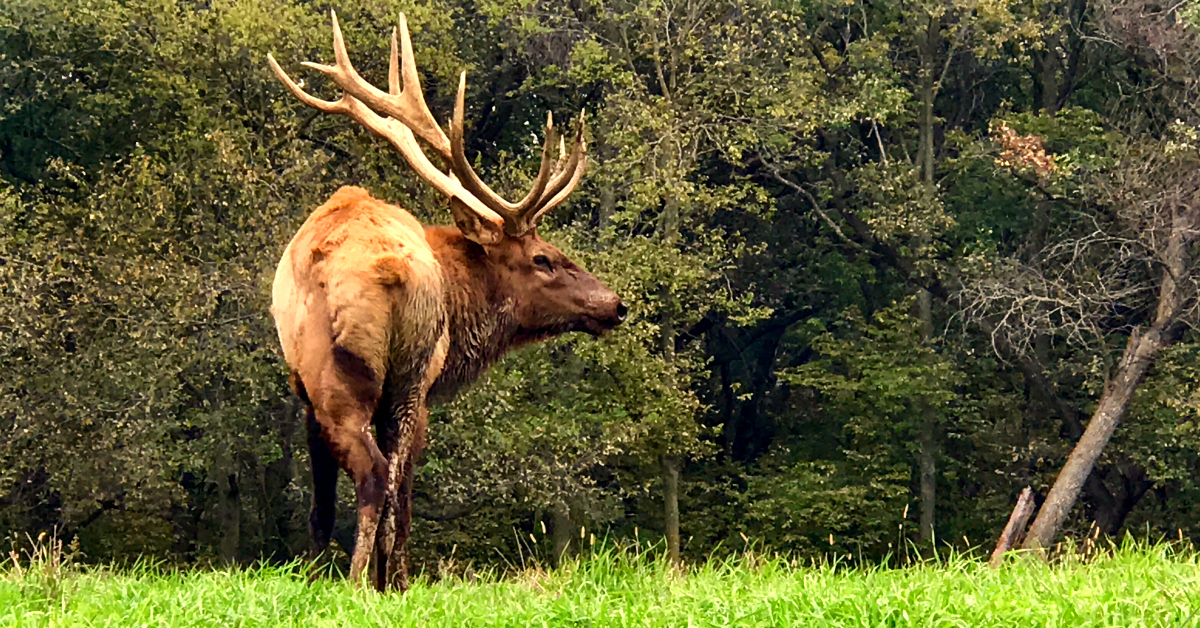 No matter where you live, there are likely tourist attractions nearby that you’ve driven past for years. You have good intentions of visiting, but never actually take the time to stop.

At least once a month for more than 16 years, I’ve driven past a large, green sign on the interstate that says, “Wildlife Safari.” That sign has intrigued me just about every time I’ve gone by it. I mean, how does the idea of a safari in the middle of Nebraska cornfields not make somebody curious? But the curiosity I felt never pushed me to actually angle the car off the interstate and stop.

A few weeks ago, Ann and I took our friend Michael to Quarry Oaks golf course where we enjoyed a wonderful fall morning driving some Alzheimer’s residents around the golf course while basking in the beautiful views. 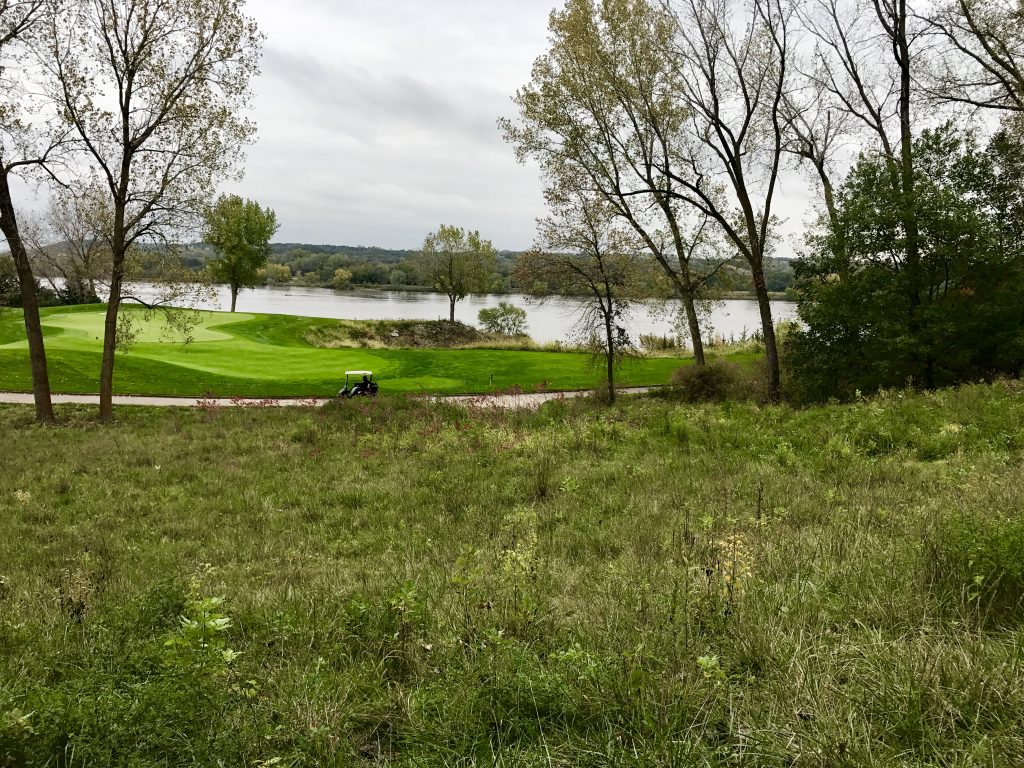 View of the Platte River from Quarry Oaks Golf Course.

When we left the course, we found ourselves driving past the wildlife safari we’ve skipped so many times. But this time, we called an audible and pulled into the Lee G. Simmons Conservation Park and Wildlife Safari. We’re so glad we finally did.

After paying admission at a drive up window, we continued down a well-maintained gravel road, across a cattle guard and into the park. Soon, we saw some elk in the distance. The road continued to wind trough the park and we got closer and closer to the animals. This was obviously nothing new to them as they weren’t bothered in the least by the presence of cars. 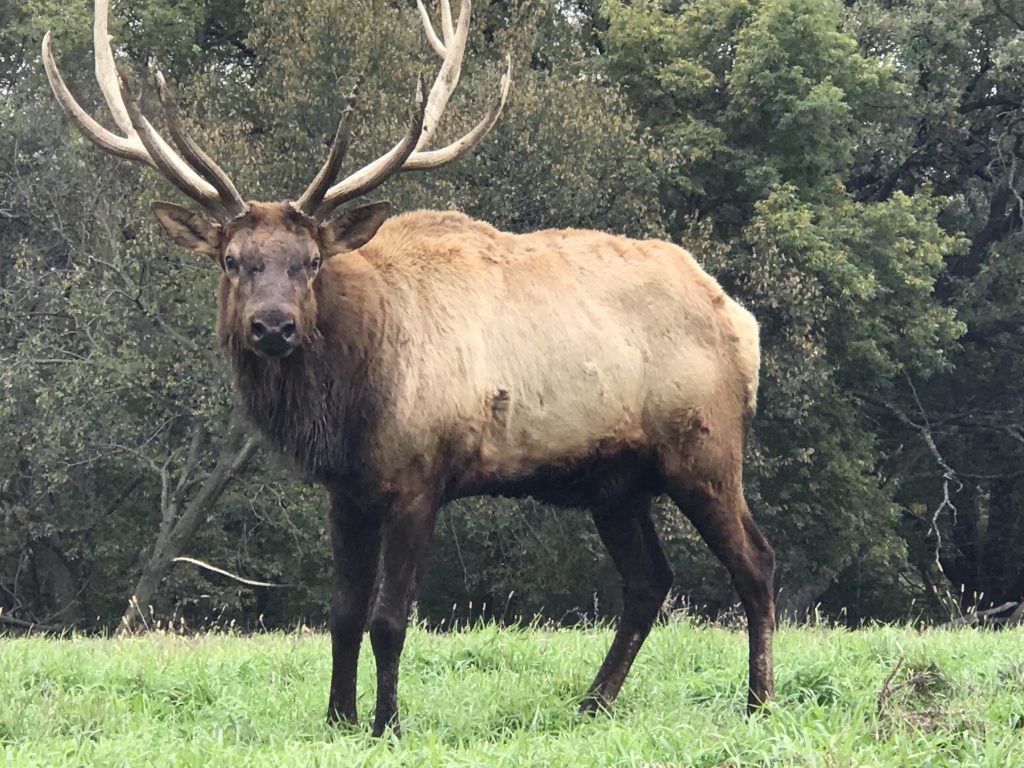 Suddenly, we watched as one of the elk raised its head, opened its mouth and let out a sound unlike anything we were expecting. Now we know what bugling elk sound like.

The road continued across another cattle guard, a sign announcing that we were now in an area with white-tailed deer. They were tougher to find as their natural camouflage is pretty good. There are at least two in this photo, see if you can find them. 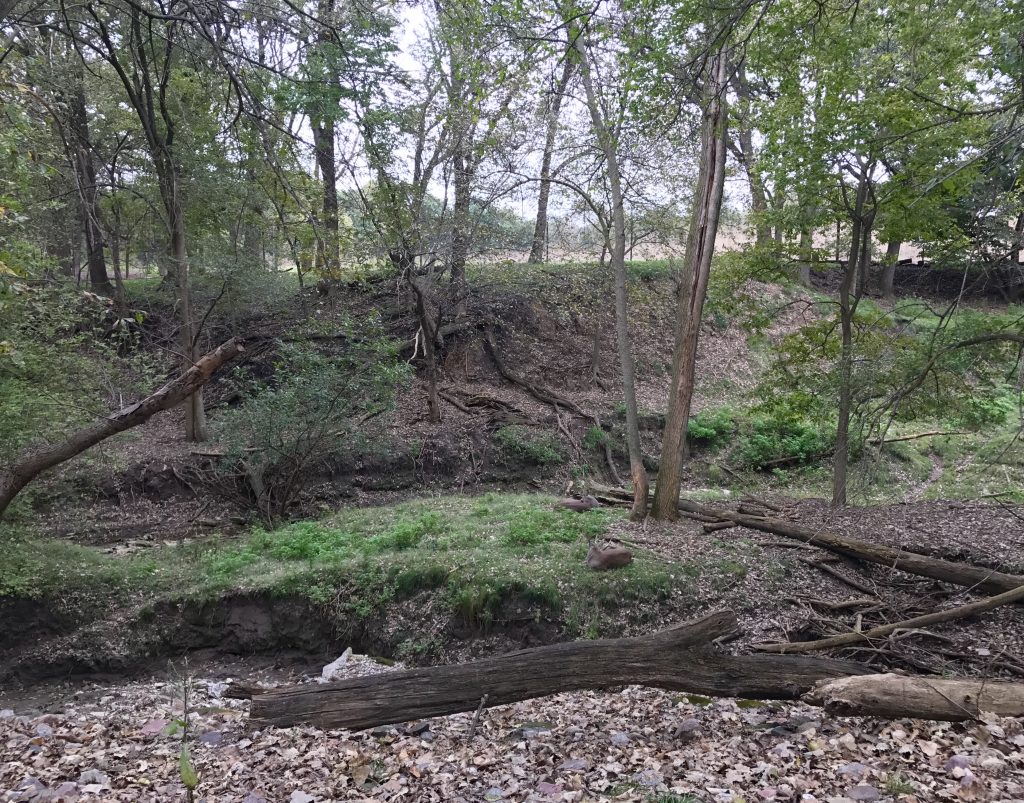 Can you find at least two deer in this picture from the Lee G. Simmons Conservation Park and Wildlife Safari.

The road meandered on, and we found ourselves at a place where we could get out of the car and look in a pond. A frog jumped into the water just before we snapped this photo. 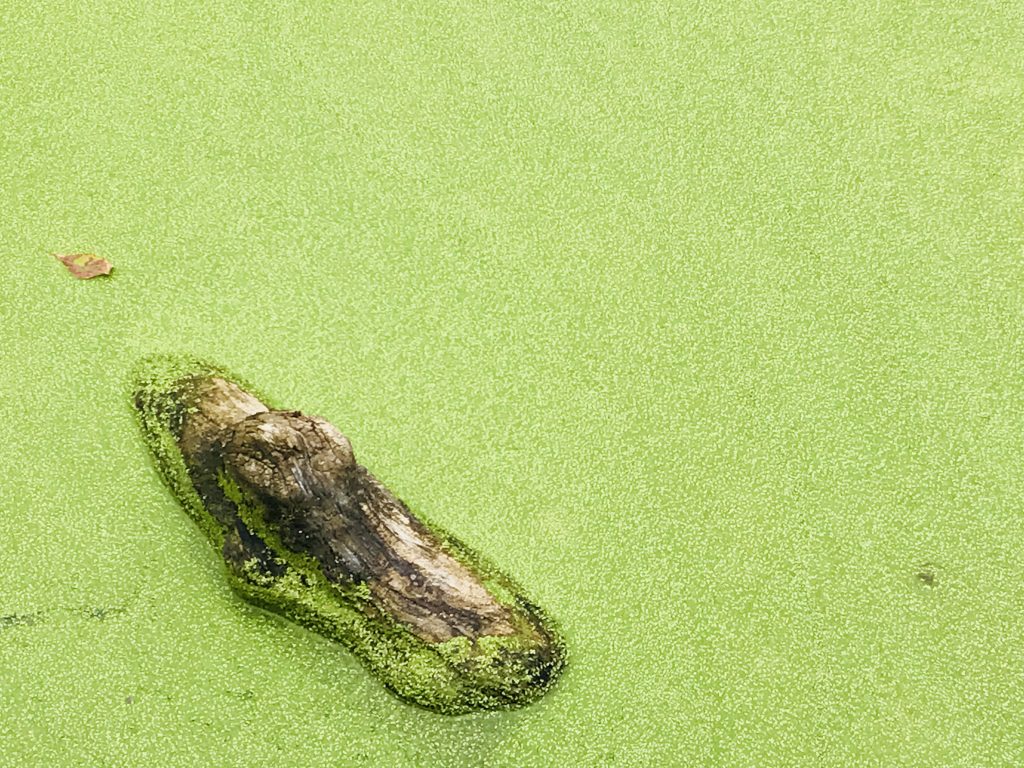 We loved seeing all of the beautiful colors of nature at the Lee G. Simmons Conservation Park and Wildlife Safari.

On the pond were also some American white pelicans. 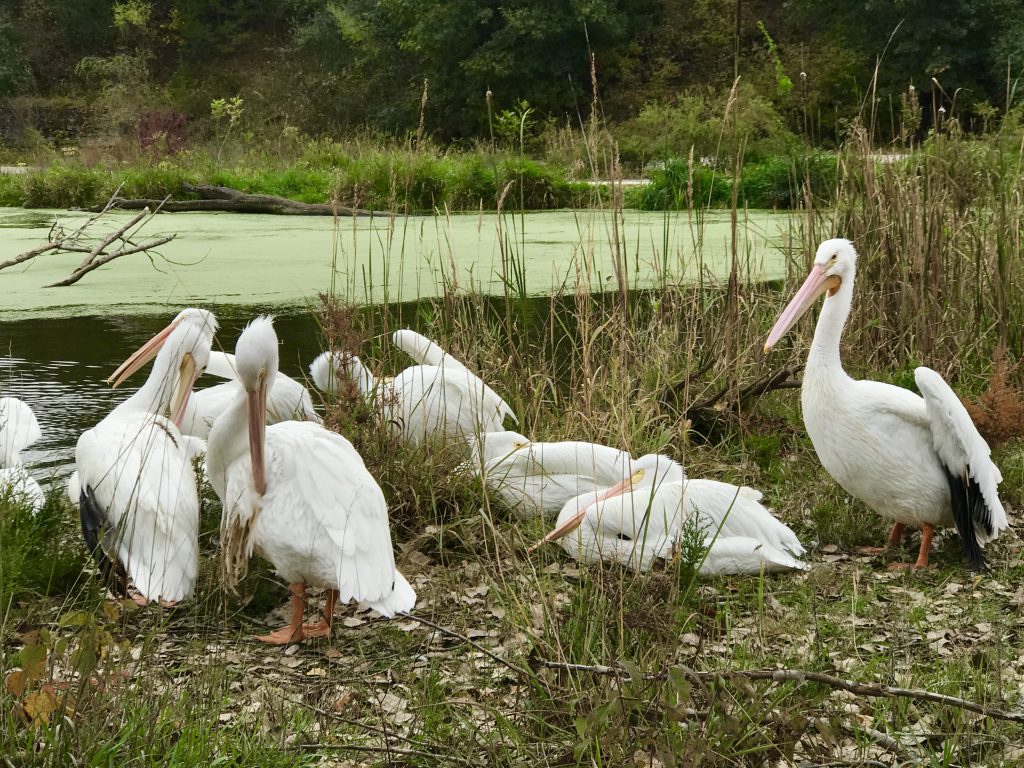 Next up, came the eagle aviary, home to some bald eagles that have been rescued. Michael tried to hold a tiny one on his finger. 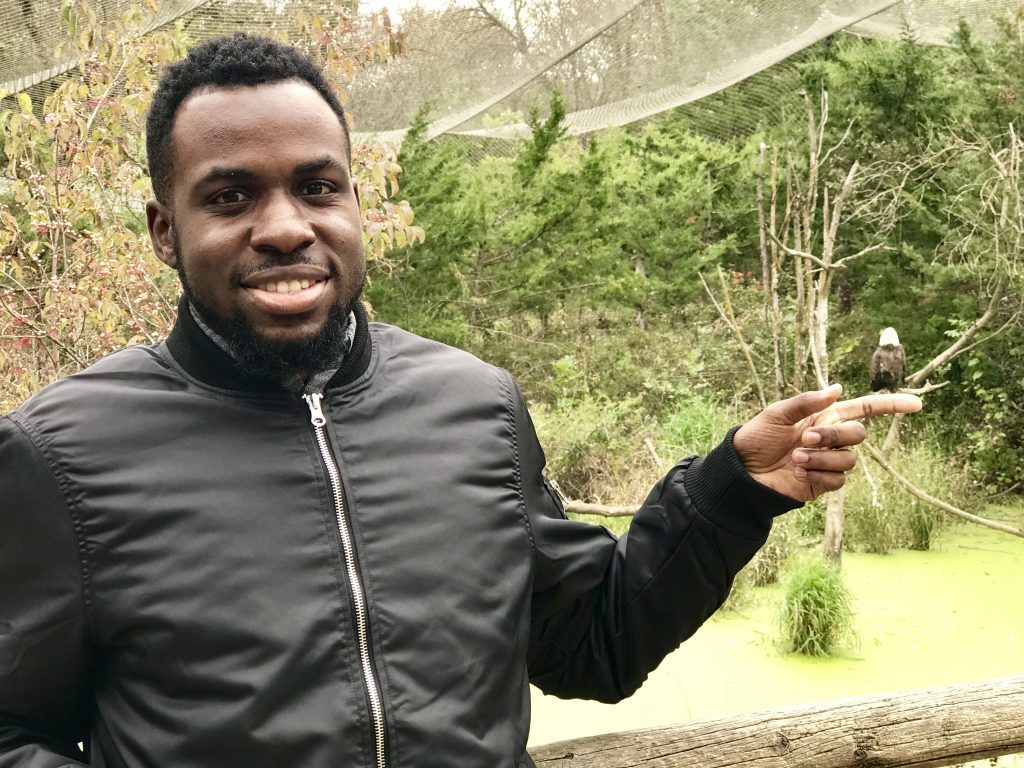 Look how Mikey got this tiny eagle to rest on his index finger!

Near the aviary, there is a parking area with restrooms as well as a trail to enclosures that house bears and wolves. There are also some owls and other birds who live in trees along the path. 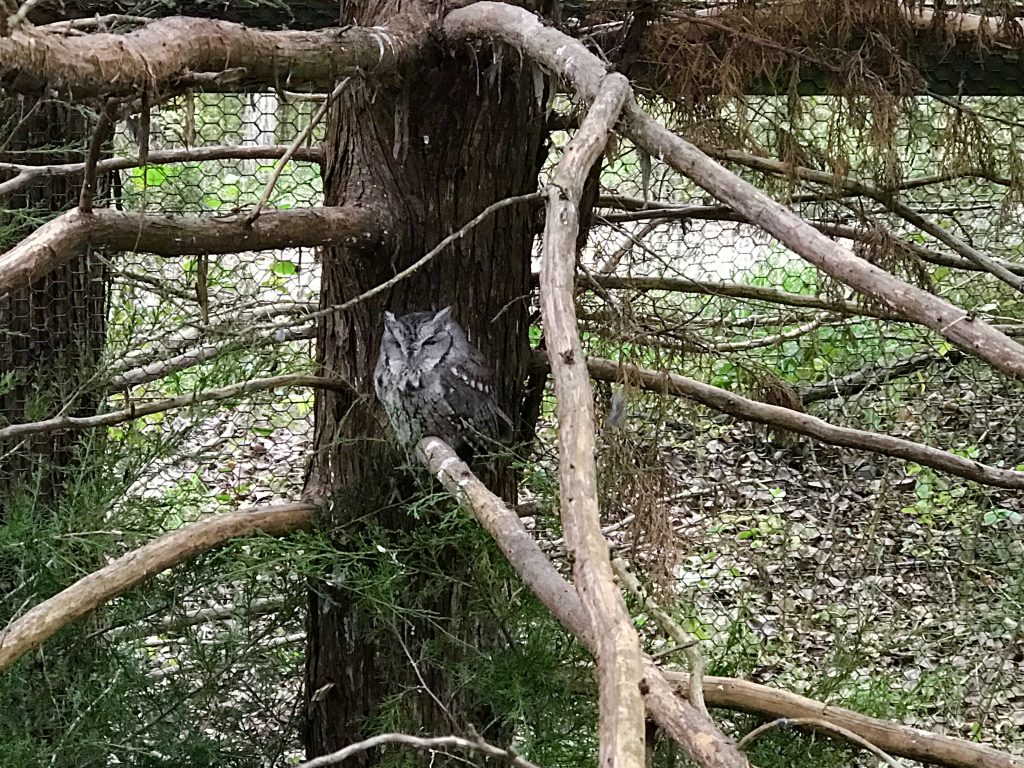 An owl nestled in a tree at the Lee G. Simmons Conservation Park & Wildlife Safari.

We returned to our car and drove past some Sandhill Cranes and other waterfowl. 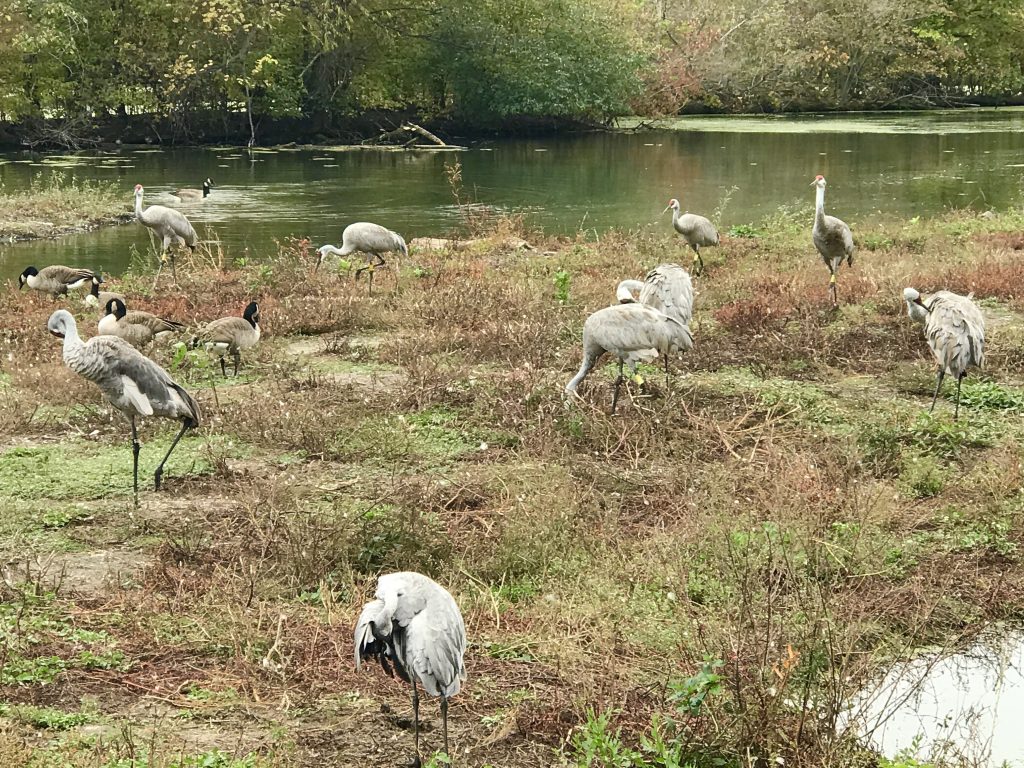 Then, we crossed another cattle guard and drove into the bison area. Sadly, while we could easily see the bison, they were too far away for good photos with the limited camera equipment we had with us. Still, it was fun to see them.

We drove across another cattle guard and found more elk, this time, females. 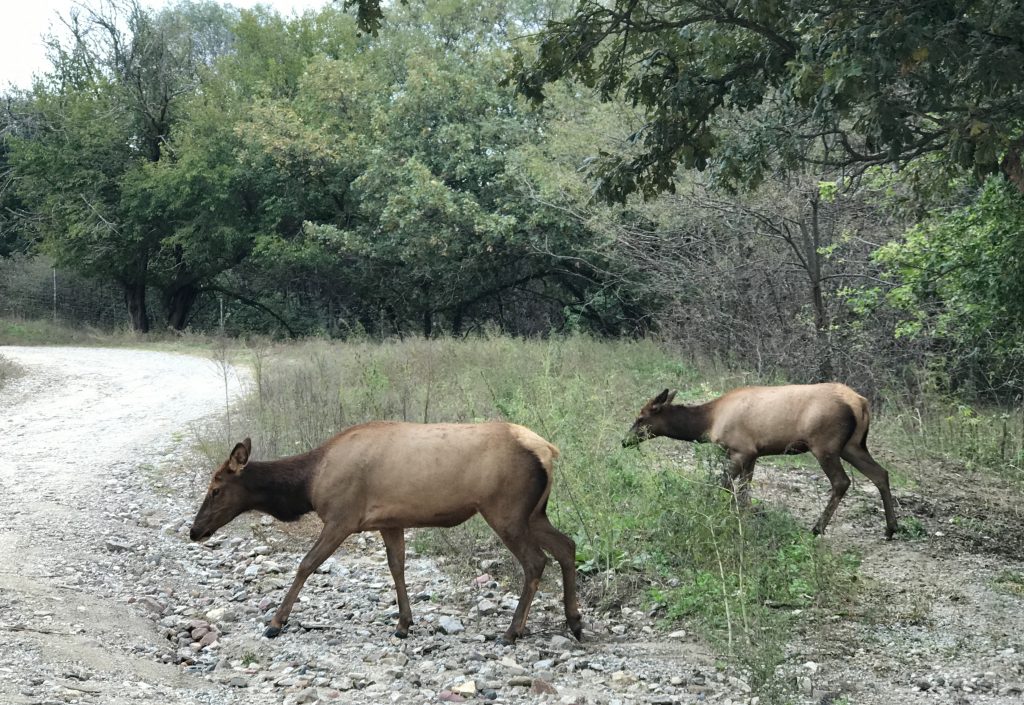 By this time, the winding road had taken us back to the visitors’ center. Time was running short and we had to get back to Crete so we left that for another day (I know, we’re awful!), but we were so glad that we’d finally found time to explore this treasure that had been right there for years. Sometimes, there really ARE incredible things to do near your home if you just take the time to do them.

Is there a place near your home you’ve been meaning to stop that might make for a fun weekend day of exploration? Tell us about it in the comments.