Yes, we ate a jellied beef ring on our trip through the South 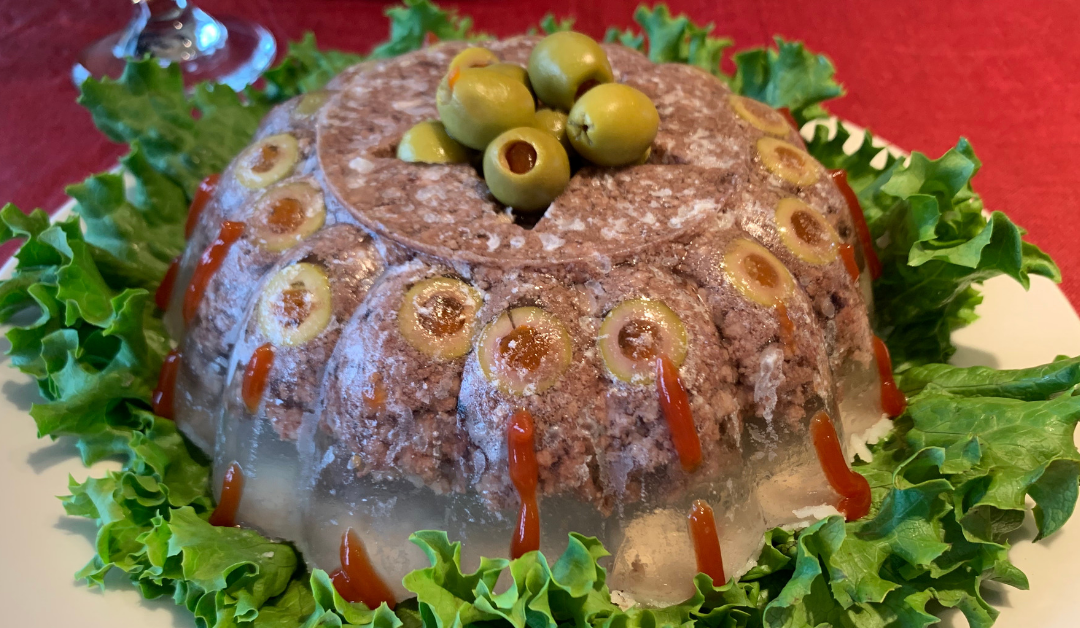 We’ve featured a lot of unique restaurants on our blog. But none compares to the culinary experience we had earlier this year while road tripping across the south. Flabbergasted (yes, that’s the name of the place) is known across the South for its vintage jellied beef ring and was by far, the most interesting place we’ve eaten yet. 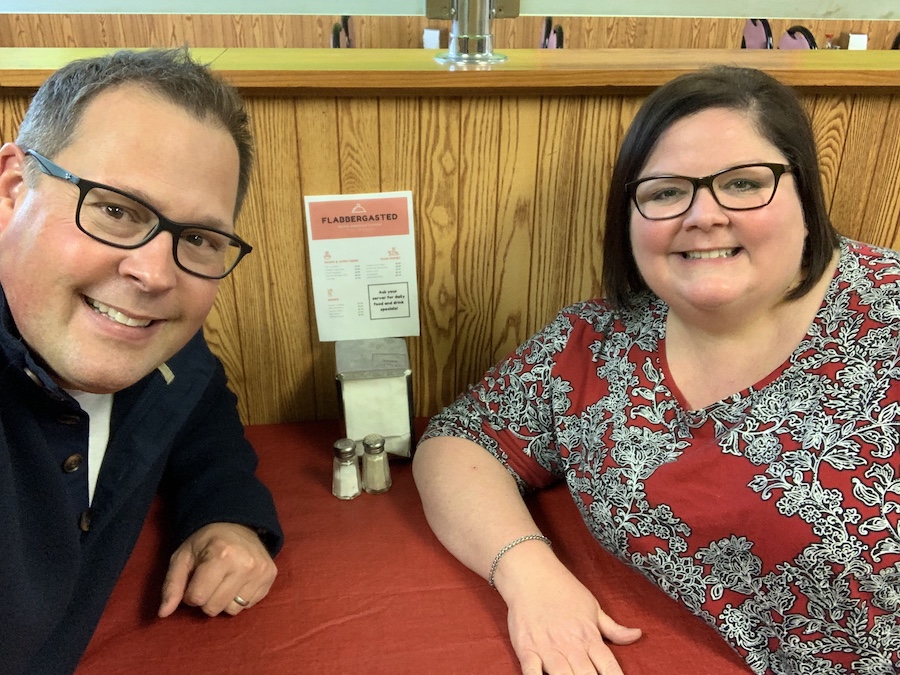 Known for its outrageous renditions of retro and vintage American cuisine, including fondue and liver pate, Flabbergasted opened in 2014 in the small, rural town of Truco, Mississippi. We would not have known about it, but for our Canadian friend, Roger Speer, whom we met on a cruise several years ago. Here he is with his with his wife Jane having lunch with us on the Amalfi Coast last summer. 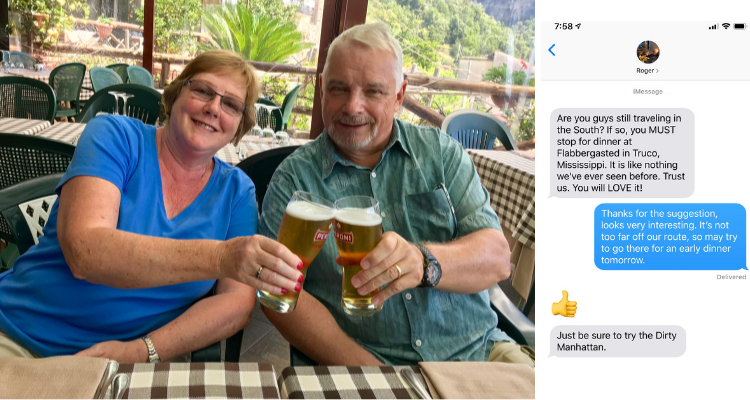 Roger and Jane, had been following our blog as we toured the south, and sent us a text about Flabbergasted. We’ve had many wonderful foodie experiences with Roger and Jane and trusted their opinion. So, it seemed worthwhile to venture off our intended route and make a pit stop in Truco and we stopped for an early dinner. 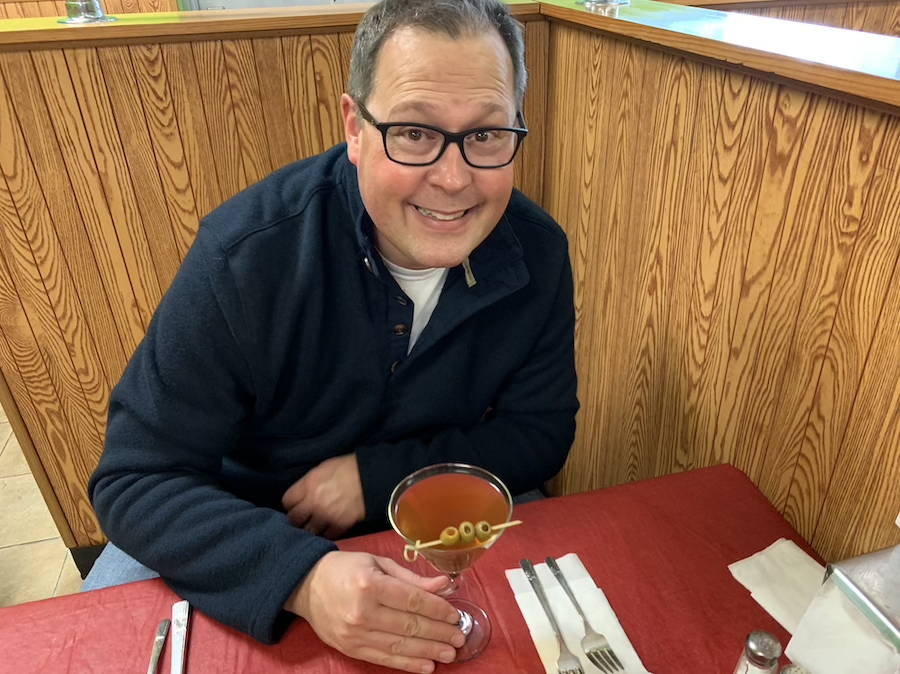 Our dining experience began with cocktails. I had the Aviator Crashing, which was a spin on the classic Aviation cocktail, but with Bailey’s Irish Creme instead of creme de violette (sorry, I forgot to take a photo). Steve had the Dirty Manhattan, which was a lot like a bourbon Manhattan, but with olives. 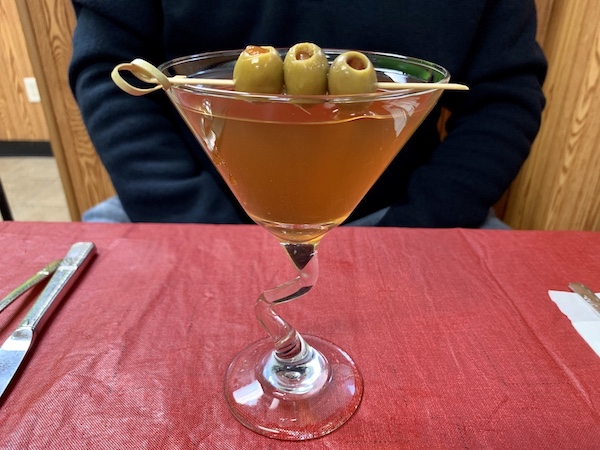 He loved it so much, he asked the bartender for the recipe so we could make it at home. We recreated it this weekend and shot this instructional video below so you can make it at home, too.

Our Flabbergasted server, Hank, recommended we each try an appetizer and then pick one or two of the outrageous retro entrees to share. I ordered the cottage cheese ring starter and Steve had the pureed spaghetti soup. 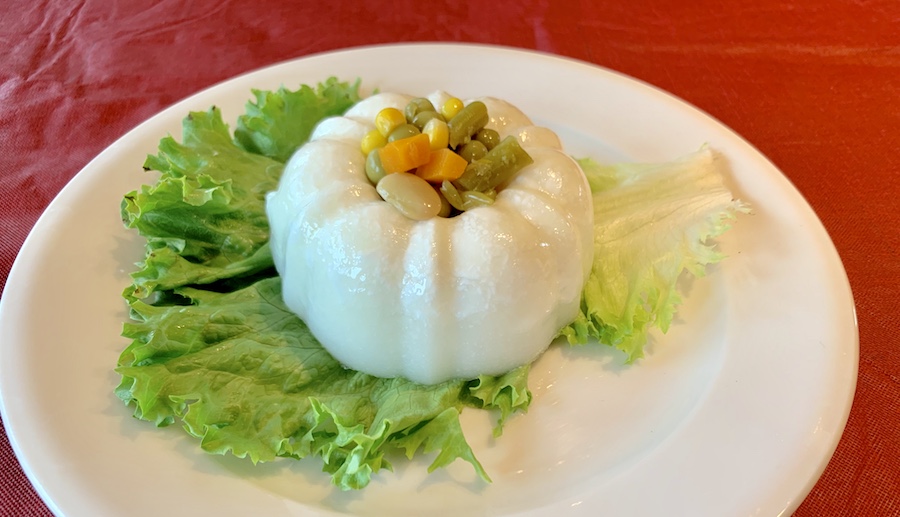 The cottage cheese ring wasn’t too bad. Apparently, these rings were popular in the 1950s. I found it on a vintage recipe website HERE. The one at Flabbergasted was served cold with a chilled vegetable medley in the center. It was good. Different, but good, I guess, considering the vegetables were chilled and I’m not a huge fan of lima beans, anyway. 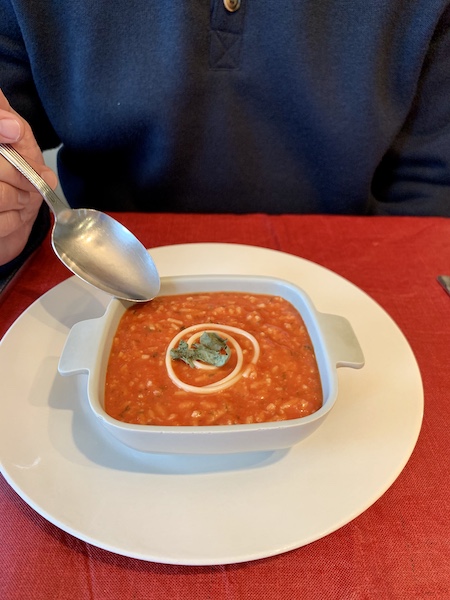 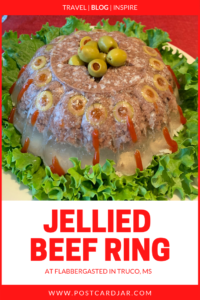 For our entree, we decided to go all out and ordered the Jellied Beef Ring. It was a classic 1970s dish invented during the Jell-O craze, we were told. Hank, who was born and raised in Truco, said it has been the most popular item since Flabbergasted opened. He said they often sell out of it early, so if we wanted to try it, we’d better order it quickly. 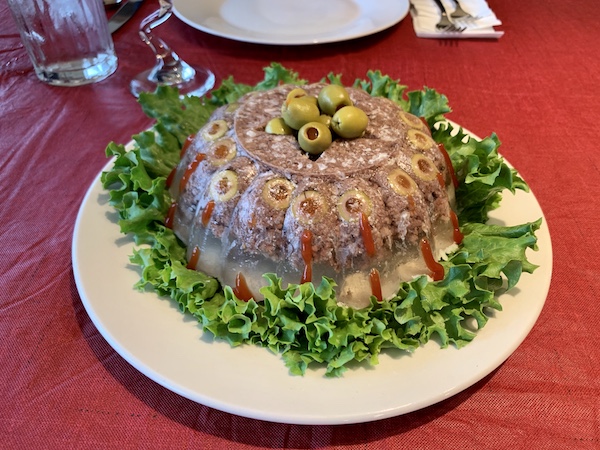 The Jellied Beef Ring was just as it looked in the picture on the menu (and above). It was made of slightly seasoned browned ground beef, set with gelatin in a jelly mold with spiced pimento-stuffed Manzanilla green olives. The dish was served chilled, family-style on a bed of leaf lettuce and topped with a generous amount of olives. Gotta tell you, when we sliced into it, the slurping sound wasn’t very appetizing but the taste was out of this world.

Knowing that the Jellied Beef Ring would be quite a bit to eat by itself, we opted for a smaller side and ordered the Unicorn Mac-n-Cheese. It was also delicious and, as expected, turned our tongues different colors. 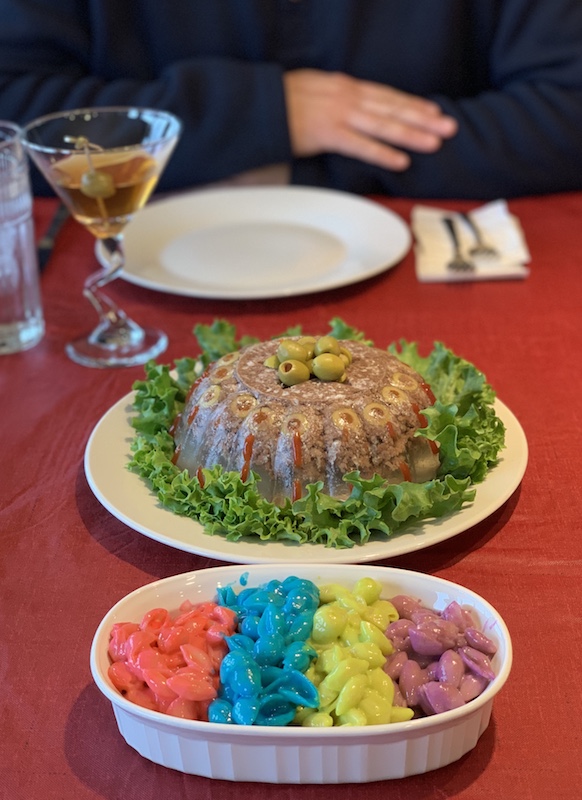 This dish began with pasta cooked to a perfect al dente, then coated in a smooth and creamy cheese sauce, served in four different neon colors just like a unicorn! I was so happy we ordered it because let me tell you, this dish was meant for Instagram (especially with the Clarendon filter).  As you probably guessed, we ate the whole thing. Steve may or may not have licked the dish.

For the grand finale, we took Hank’s recommendation again and ordered the sweetened bologna cake. (B-O-L-O-G-N-A — remember that commercial?). He told us that bologna cake was a savory dish normally served as an appetizer with crackers. He apologized for the not-so-perfect job on the cake decorating, explaining that the pastry chef had recently broken her pinky finger. 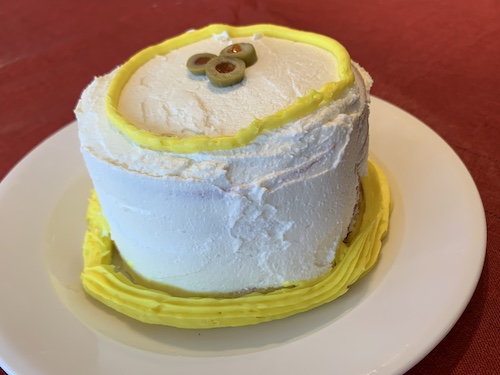 However, the bologna cake at Flabbergasted was more of a sweet and savory mix and was on the dessert menu, instead. Made of thick-cut slices of house-made bologna, this unique cake was layered with a slightly sweet cream cheese and mayo frosting, topped with bright yellow buttercream frosting, and garnished with green olive slices. They must get a good deal on olives at Flabbergasted. 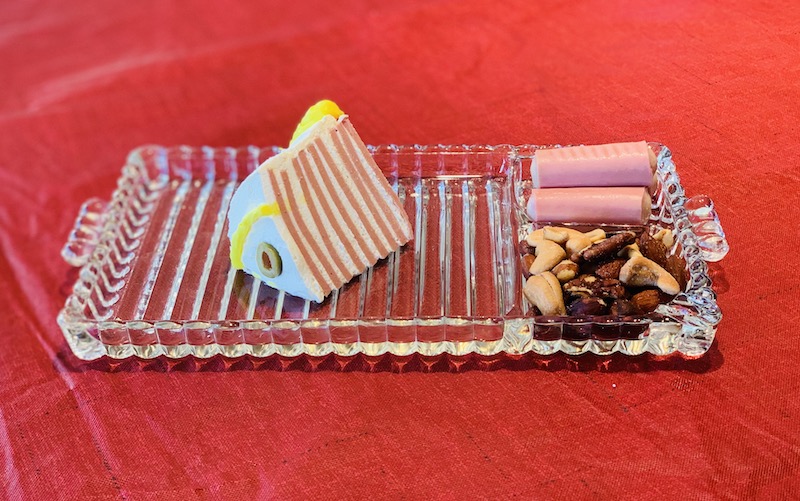 The bologna cake was served on one of those vintage snack trays like your grandma had, along with mixed nuts and … wait for it … three candied Vienna sausages. Yes, Vienna sausages. Not a great compliment in my mind, but whatever.

As we finished our meal…

Did you really swallow all this bologna? Do you really think we’d ever in a million years eat a jellied beef ring? April Fools! (Now, please help us keep the fun going…NO SPOILERS IN THE COMMENTS ON SOCIAL MEDIA.) Oh, and by the way, “Truco” means “trick” in Spanish. NOTE: No actual bourbon was harmed in the making of this post. 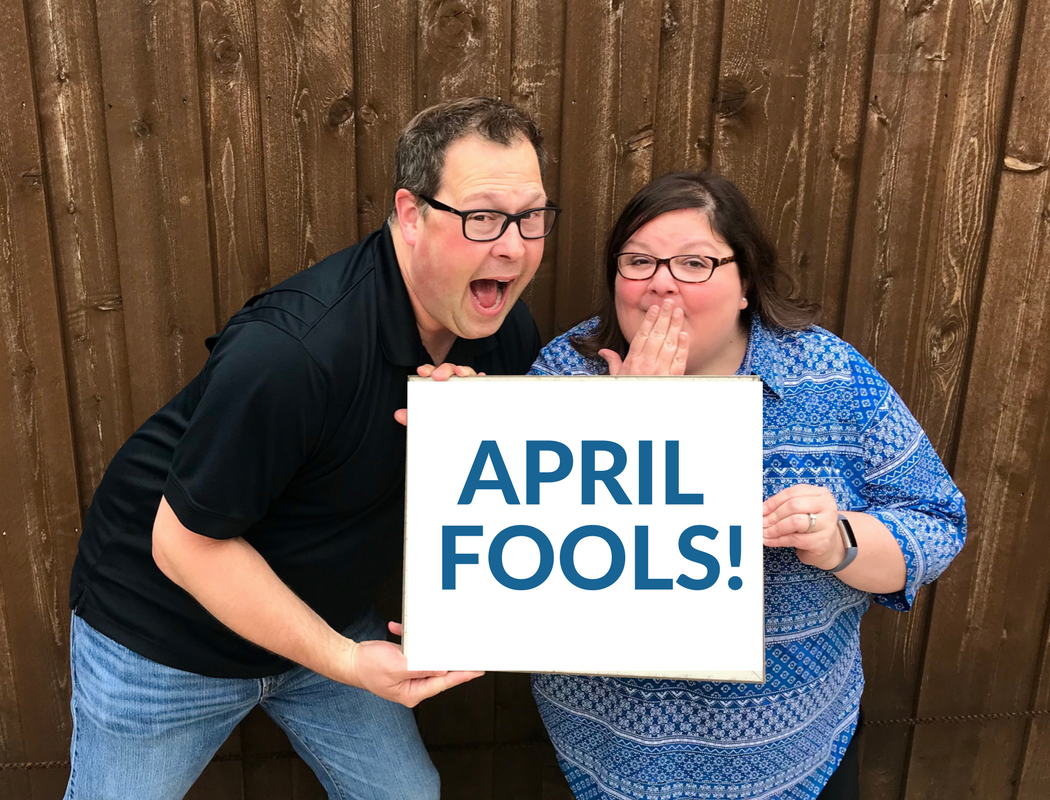 For more April Fools’ fun, read about Ann’s first visit to a nude beach, as well as what landed in Ann’s wine during our first class flight from Miami to Houston.