The Flora-Bama Polar Bear Dip: A heart stopping start to the New Year 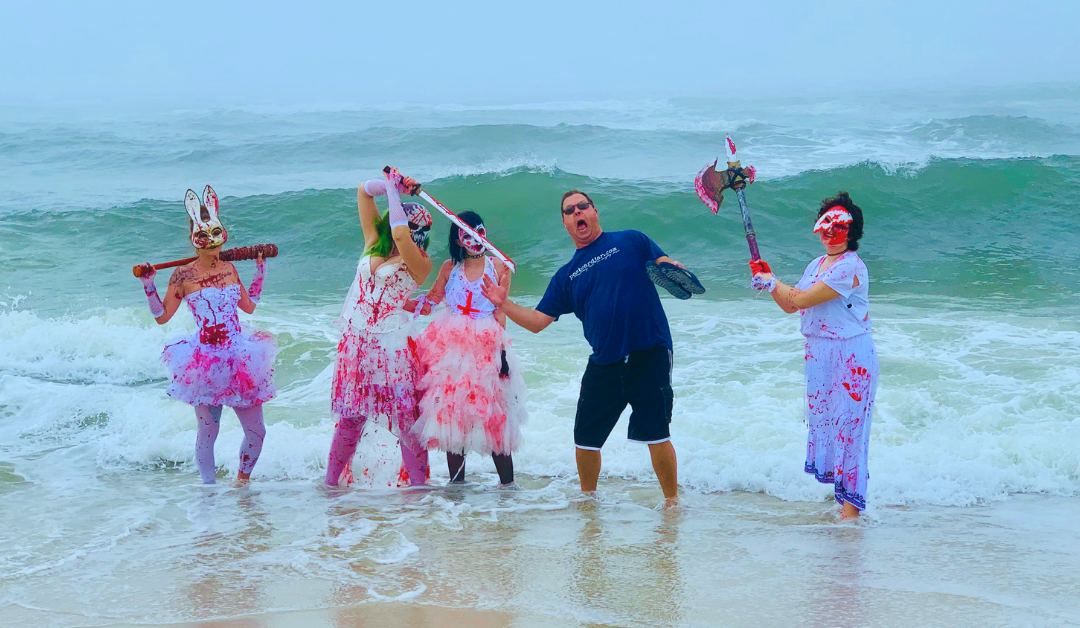 When Ann heard about an event in Orange Beach, Alabama, called the Flora-Bama Polar Bear Dip, she thought it sounded like a great idea. Knowing full well which one of us would get to run headlong into the Gulf of Mexico on New Year’s Day, (and who would stay dry to take pictures) I had to think about it a little. So, after very little thought and a Bushwacker drink, I agreed to take the plunge.

Into the Gulf of Mexico

I’ll admit that shortly after agreeing I began to have second thoughts. Did I really want to immerse myself in the Gulf of Mexico in the middle of winter? I wasn’t so sure. After all, I enjoy maintaining a regular body temperature. But at the same time, I thought it might be fun and it was one of those things I could forever say I’d done. 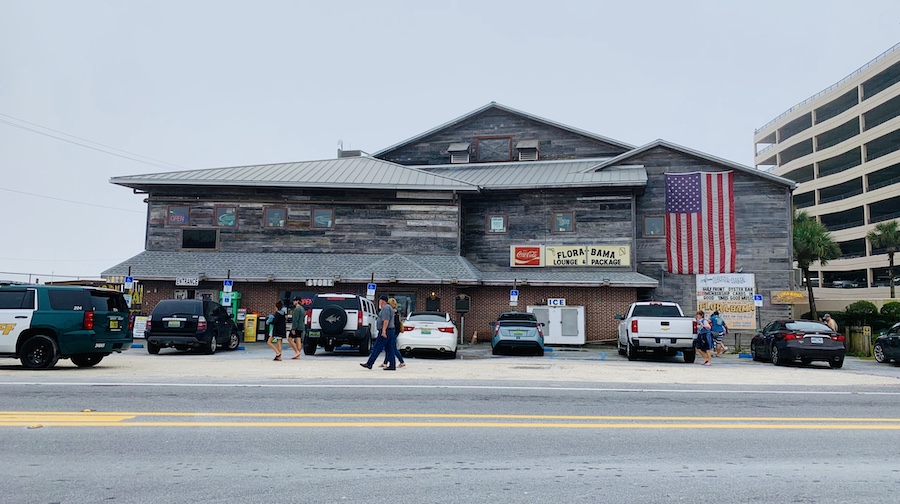 During our 5,000-mile road trip across the south, we found ourselves in Gulf Shores, Alabama, for the new year. On New Year’s morning, we drove east down the highway to the Flora-Bama Lounge. Located right on the beach, smack dab on the Florida-Alabama state line, they have made the Polar Bear Dip one of their signature events. Participants who go completely under water even get a free meal and a beer. We got there almost an hour early, found a place to park across the road about a block away, and headed in not knowing what to expect.

On entering, I knew we’d made the right decision to come. Sure, I was still a little nervous about hypothermia, but was too busy taking in all the crazy-fun costumes that people had worn to the event to care. It turns out that people dress up to jump into the water and freeze. This gentleman, for instance, was feeling quite patriotic. 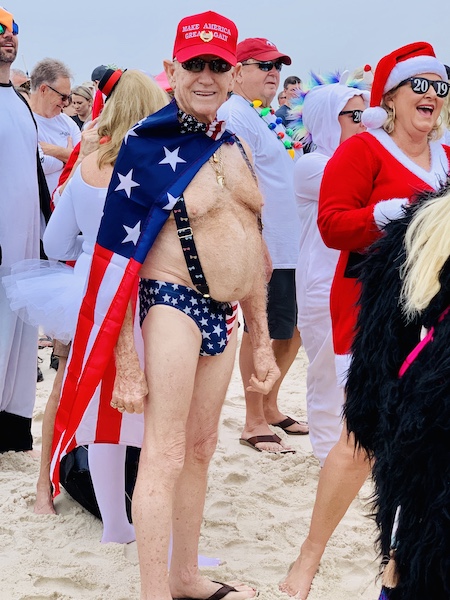 We wandered around, chatting with people, and sipping on one of the Flora-Bama’s signature drinks, the Bushwacker. 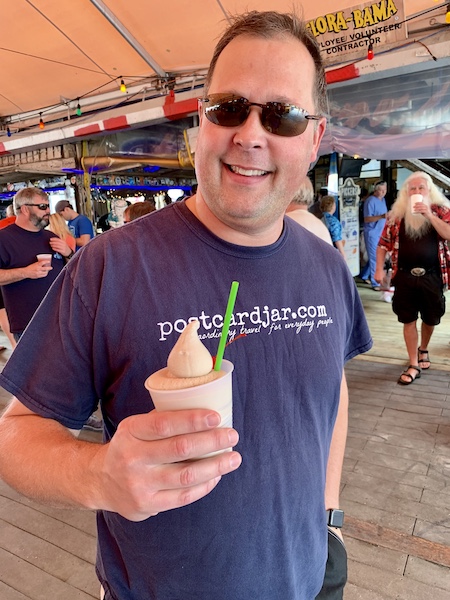 I’m not sure what all is in this frozen concoction (they don’t tell you), but I will say that it was tasty. Throughout our time, we kept snapping photos of folks in costumes far more creative than my Postcard Jar t-shirt. 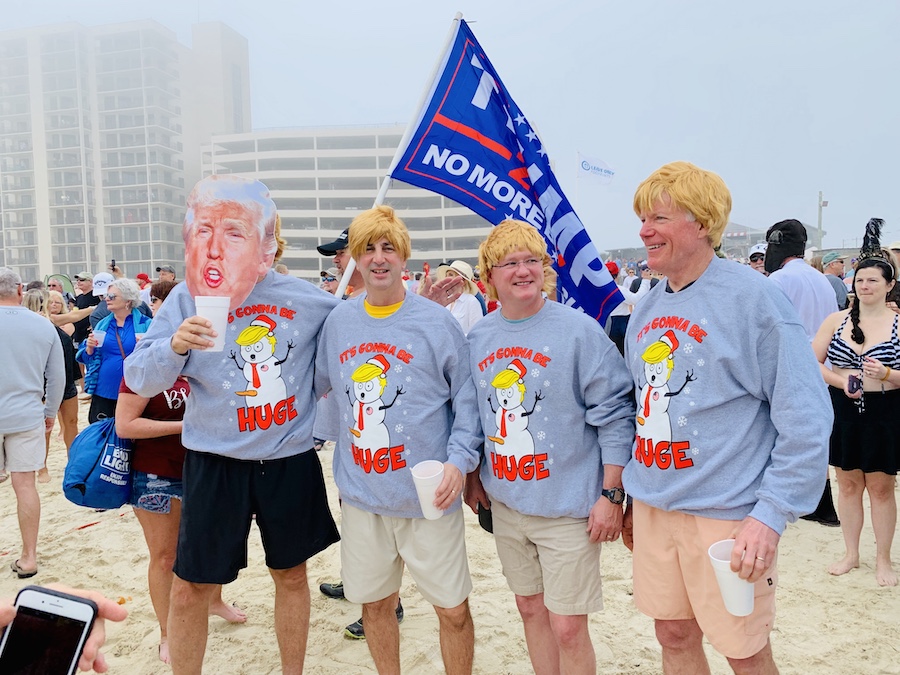 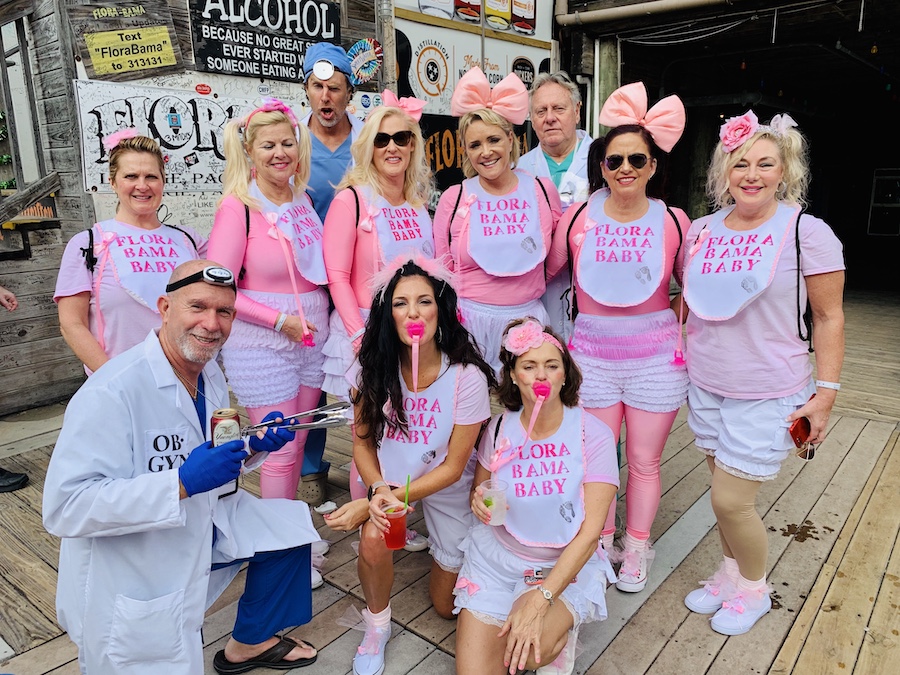 Heading to the beach for the Flora-Bama Polar Bear Dip

Finally, the time came to bite the bullet and take part in the Flora-Bama Polar Bear Dip. With the sun shining and the temperature at 74 degrees, the idea of jumping into the Gulf of Mexico actually started to appeal to me. We made our way out onto the beach with about 5,000 other participants, learning along the way that this was probably the most participants in the event’s 32-year history. 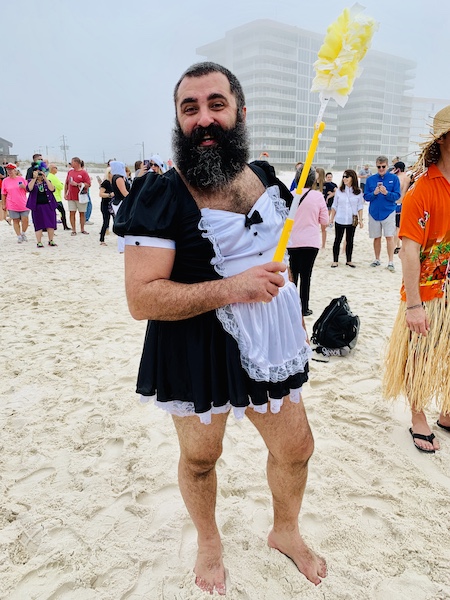 We spent a few minutes waiting for noon to arrive, and loved walking around the beach taking in all the different groups in costume. 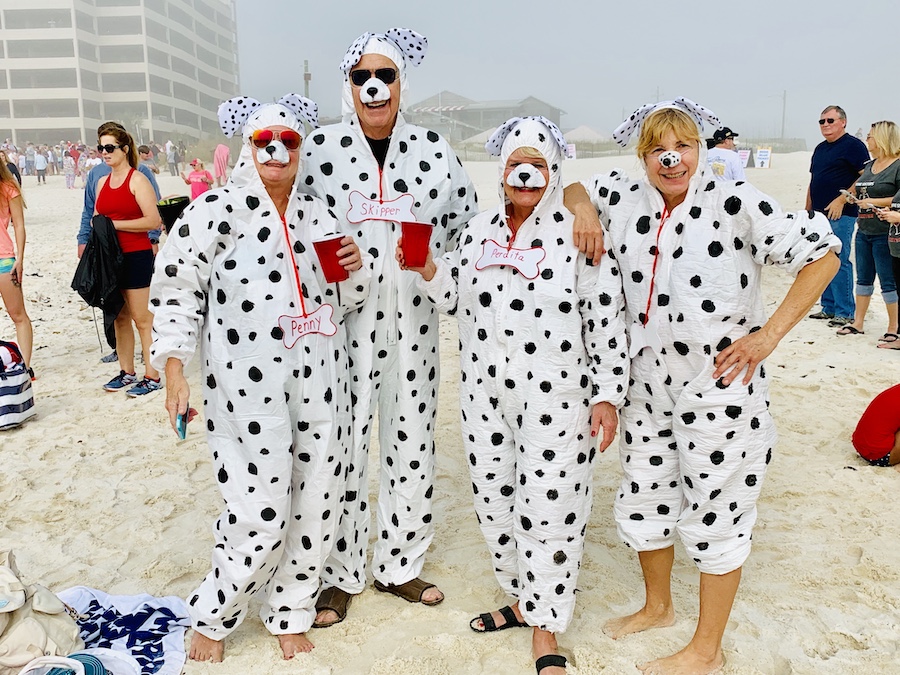 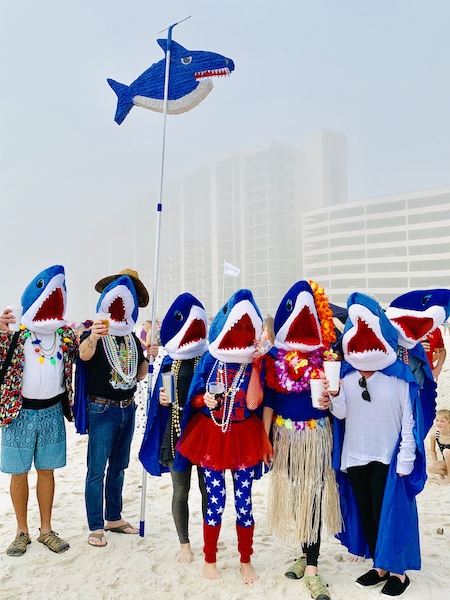 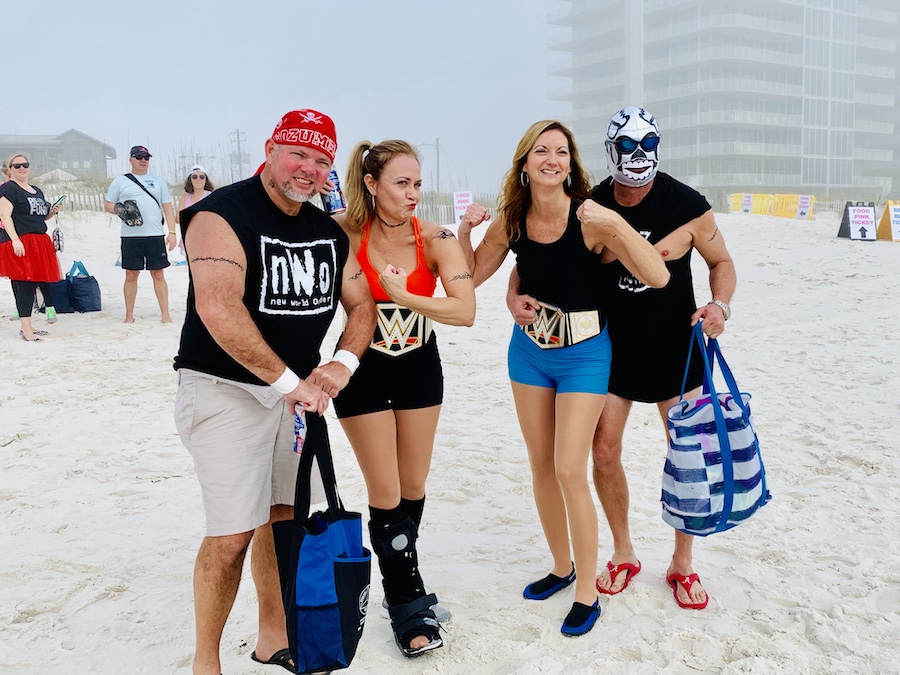 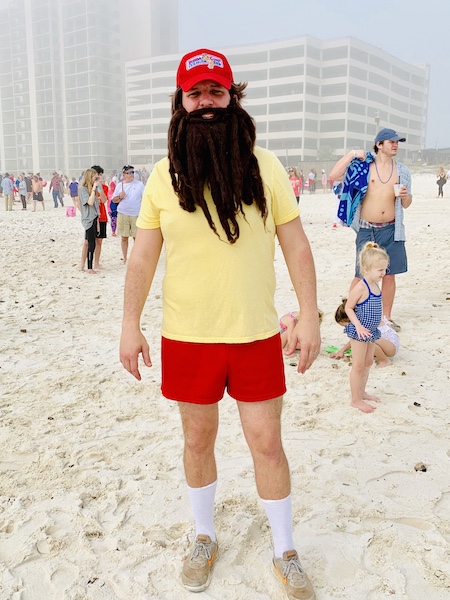 Finally, noon came and the crowd began to move. Someone threw something into the water, and the owner’s dog went to retrieve it, leading the way and kicking off the event. With a great shout, several thousand people ran, following the dog into the water. I stumbled in, lost in a mass of humanity. I dodged flailing arms and legs and felt the chilly water cover more and more of my legs, then my waist. Finally, I found a place deep enough to drop down under the surface of the chilly water and let it wash over my head. If I hadn’t been awake before, I was now. I made my way back to shore, dodging people who were behind me still running in. 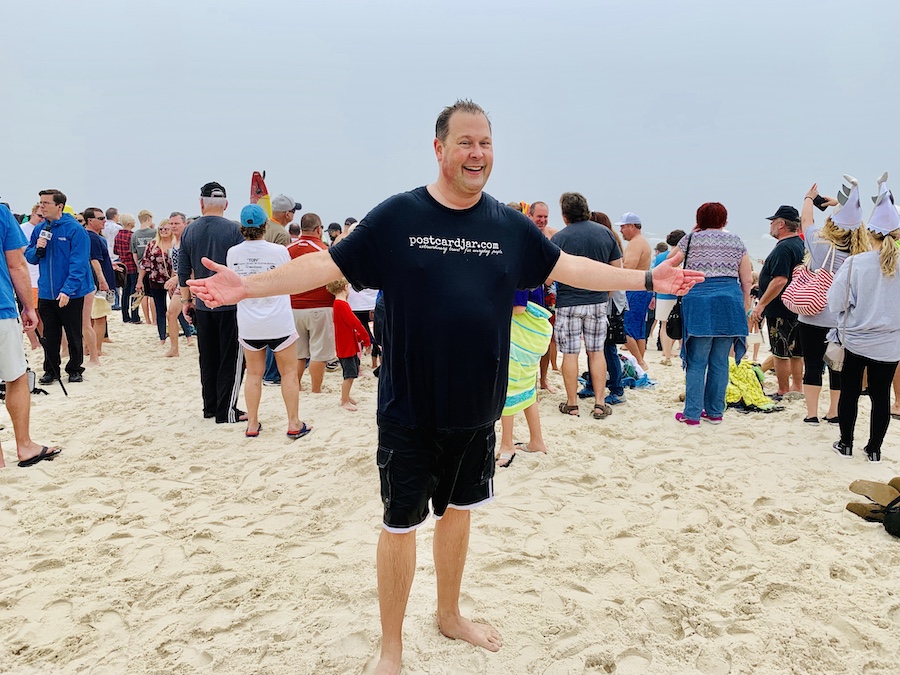 I’d done it. For a brief moment I felt strangely proud of this accomplishment. Then, remembered there are people who do these dips in places like Minnesota where they cut a hole in the ice. Oh well. I forever get to say I did a polar bear dip, and I didn’t have to freeze that much.

All the picture takers!

Ann, for her part, said she would take a video me taking the dip. But, as there were a couple thousand other people who also had planned to video, and Ann is just 5’4″, things got a little out of control. Here’s the video Ann got.

After getting back to shore, I found Ann, grabbed the towel, and dried off. We wandered back off the beach, opted to skip the line for lunch and headed back to the car, the hotel, and a warm shower. As we pulled out, the line of cars parked along both sides the road for this event ran for almost a mile! It turns out that going a little early had really paid off.

For me, travel is all about experiencing new things, even when it involves plunging into cold waters. And, it turns out, I’d like to this thing again someday. 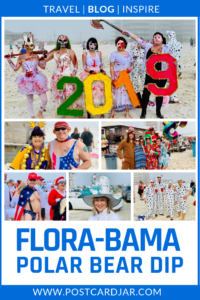 Eating healthy is not always easy on game day. Do

(By Ann) When we started our healthy living journe

Soup season is well underway at our place! Yesterd

Folks have long flocked to Clear Lake, Iowa, each

🎂 Please join me in wishing Steve a happy 50th

🎂 Please join us in wishing our daughter, @megh

Eating healthy is not always easy on game day. Do

(By Ann) When we started our healthy living journe

Soup season is well underway at our place! Yesterd

Folks have long flocked to Clear Lake, Iowa, each

🎂 Please join me in wishing Steve a happy 50th

🎂 Please join us in wishing our daughter, @megh