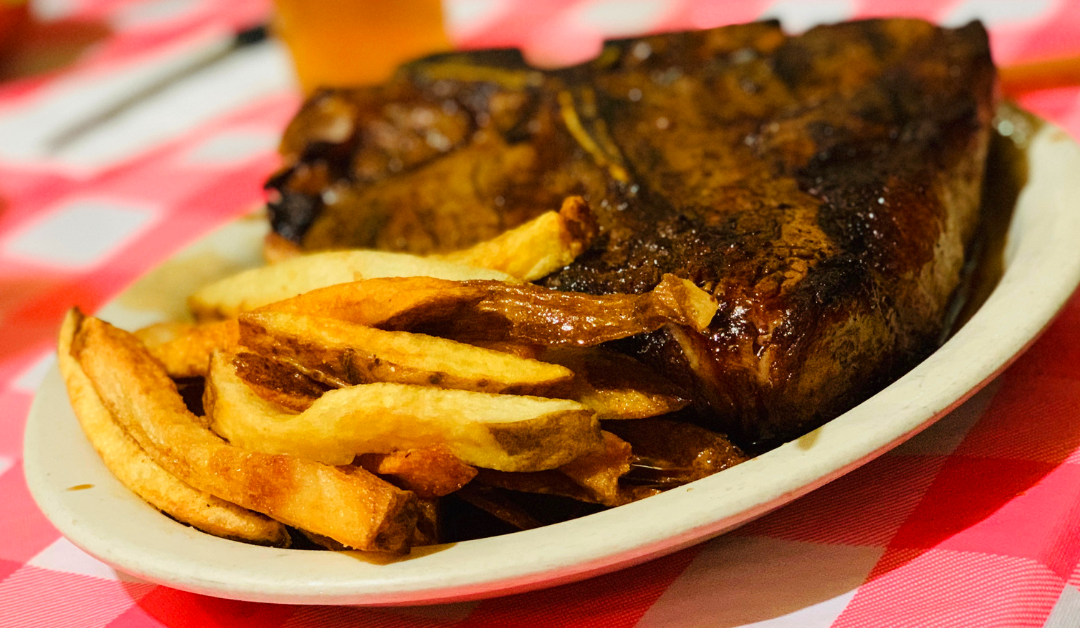 There’s nothing like the original Doe’s Eat Place in Greenville, Mississippi. Nothing. The entrance through the kitchen, two-pound steaks on a fiery open broiler, grease-stained floor boards, and lemon and oil soaked salad set it apart from any other restaurant in which we’ve eaten. And then, there are the people. 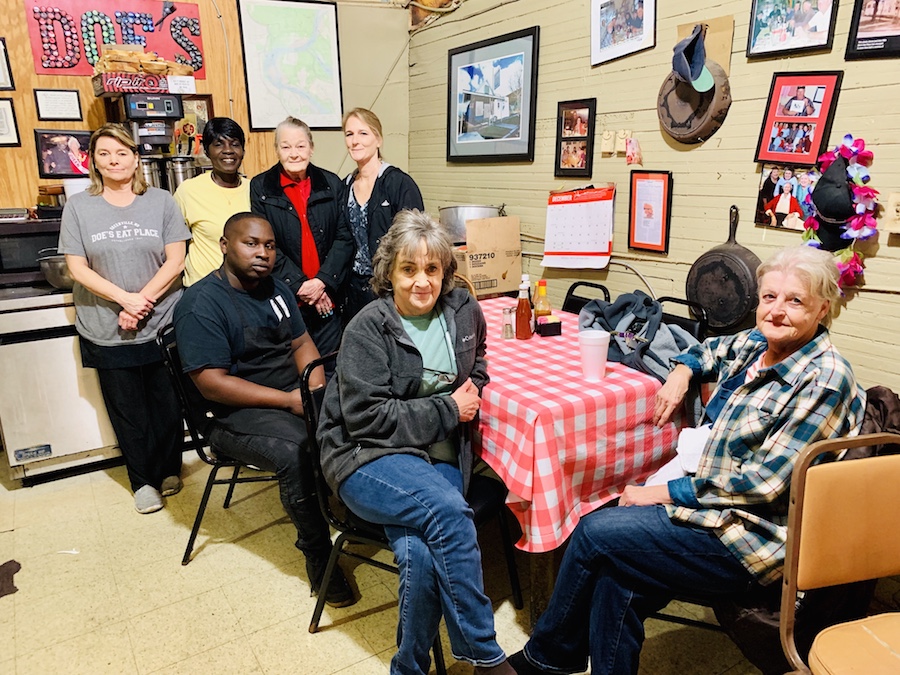 The staff at Doe’s really make this place special. Homegrown, hospitable, and hard-working. Not a one of them knows a stranger, so when we wandered in one mid-afternoon, one of the ladies waved us in to the dining area. They said to make ourselves at home and have a look around. Steve had been to Doe’s before, years ago when we he began his teaching career at TL Weston High School in Greenville. He’d wanted to take me there for a long time and finally, we had arrived at one of the most treasured eateries in the Mississippi Delta. 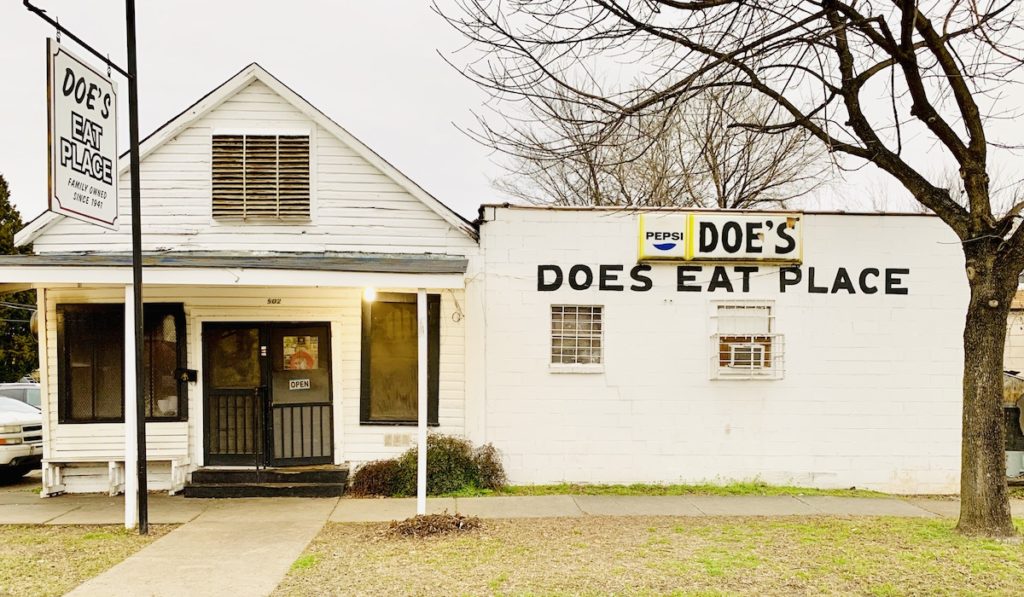 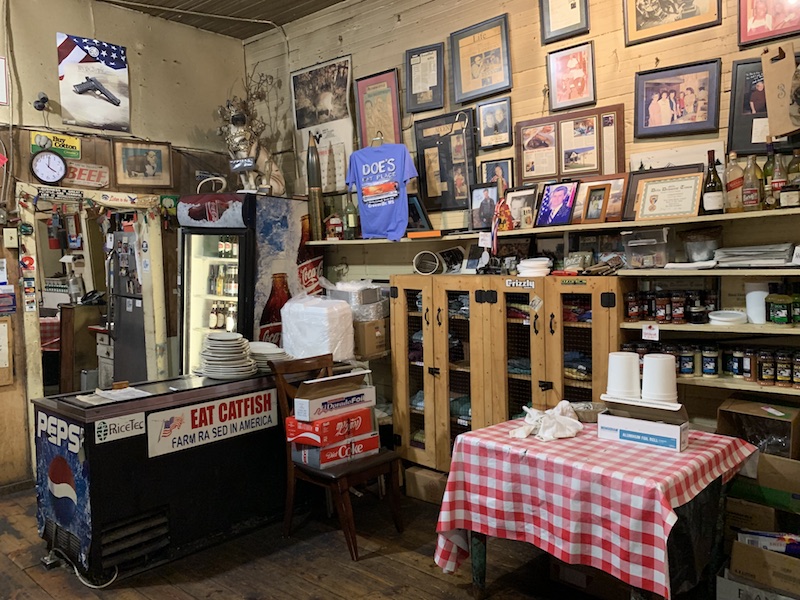 Just two steps inside the front door, I needed a minute. A minute to just take in my surroundings and process the fact that we were entering a James Beard Foundation Award winning restaurant through the kitchen – a first for me. But like everything at Doe’s, I quickly learned there’s a story about that. 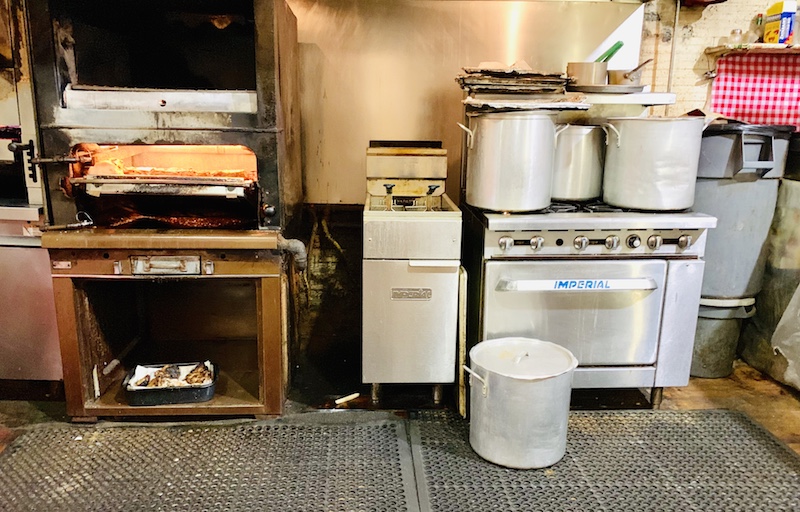 The history of Doe’s

You see, it was Dominick “Doe” Signa and his wife, Mamie, who brought this place to life. When he closed up his bootlegging business (in a town that was dry until 1967) he sold his still for $300 and a Ford Model T. In 1940, he took that money and turned the front part of his family’s grocery store on Nelson Street into a honky-tonk strictly for African-Americans. Then they started serving spaghetti and chili and Mamie crafted a recipe that is still used today for tasty beef hot tamales that taste nothing like the Mexican varieties I’m used to. 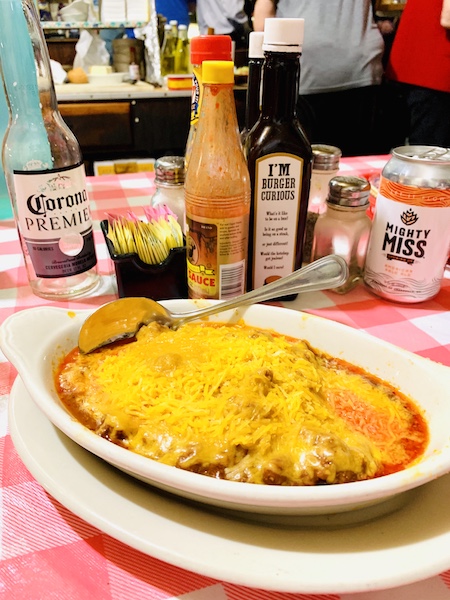 As the story goes, in a unique twist on segregation, the food was so good that white people started coming by to eat, entering through the back door to dine at tables there. Meanwhile, African-Americans entered through the front into the honky-tonk that catered to them. Eventually, they closed the honky-tonk and focused solely on the eat place for everyone. When Big Doe retired in 1974, he gave the restaurant to his sons, Charles and Little Doe. They and their families have kept it going ever since.

Today, the original Doe’s Eat Place in Greenville is an award-winning bucket list destination that attracts locals, foodies, out-of-towners, U.S. Presidents, and movie stars. And now I know why. 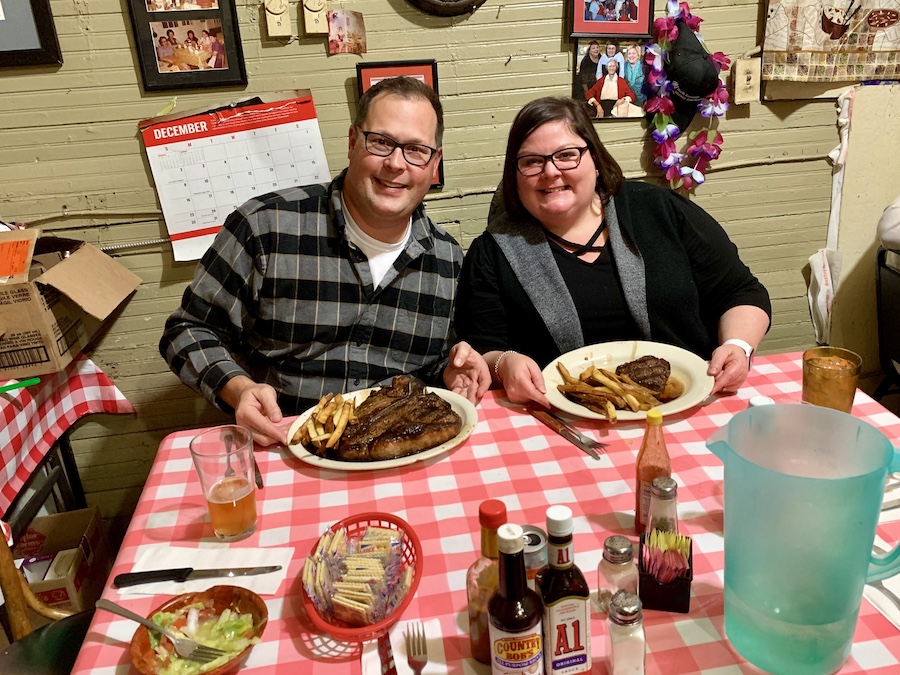 As has been done since the beginning, guests are greeted in the front kitchen that was the original honky-tonk. They are seated at tables that fill about every square inch of the building, including the kitchen and prep areas. Steve had made a reservation for us weeks before we visited. Having met the staff earlier in the day, they treated us to the best table in the house. We were seated at what they called “the family kitchen table” located smack dab in the middle of the kitchen. There, we enjoyed an up-close view of the fryers, dish washers, and iconic wooden salad bowls. We were honored. Check out this view from our table. 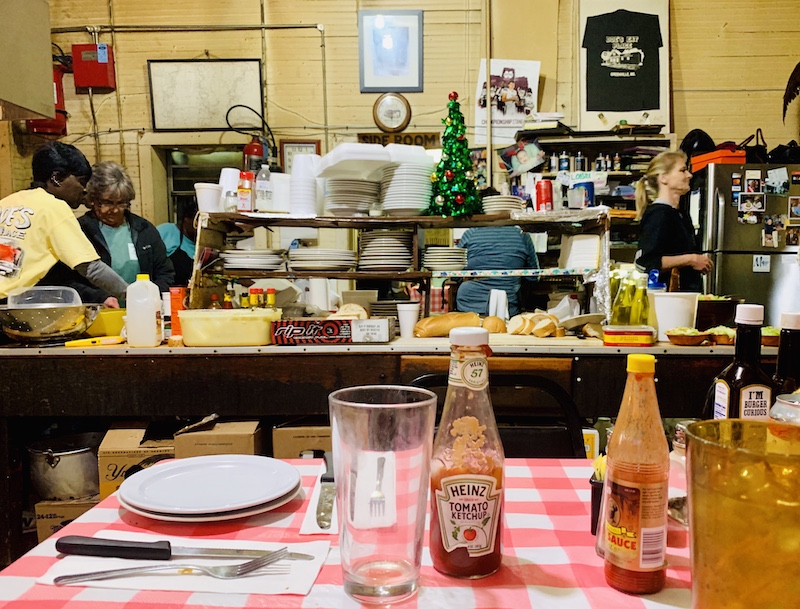 The menu at Doe’s Eat Place

There’s no written menu at Doe’s. Never has been. So our server, Debra, rattled off the steak options and then asked if we’d just like to try a little bit of everything. Why not? We started our meal with the famous hot tamales served two ways — first smothered in chili and cheese and then plain. 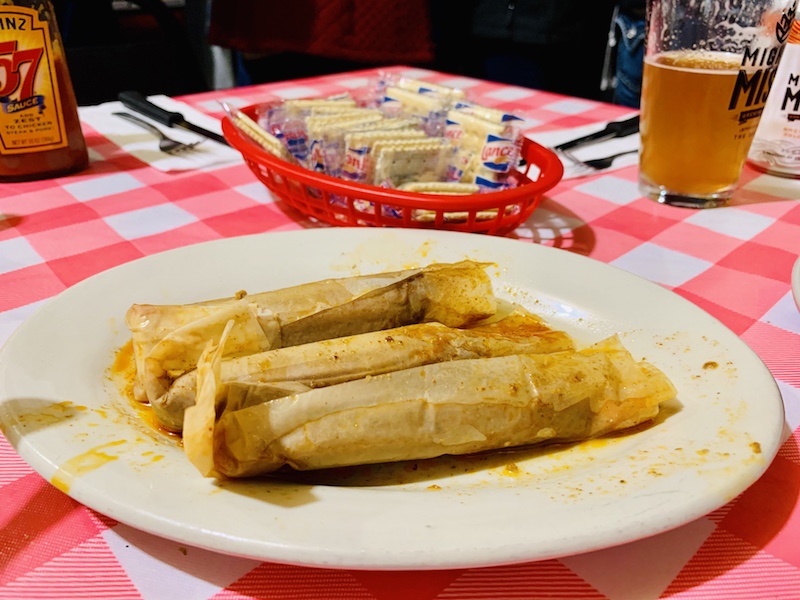 As you can see from the photo above, pristine plating is not a high priority here. It doesn’t need to be. These parchment paper wrapped tamales are simply scooped out of a five-gallon pot and plopped down on a dinner plate. They arrive at your table seconds later, piping hot and delicious. While Steve focused on the tamales, I sampled the shrimp which was also prepared two ways – boiled and fried. 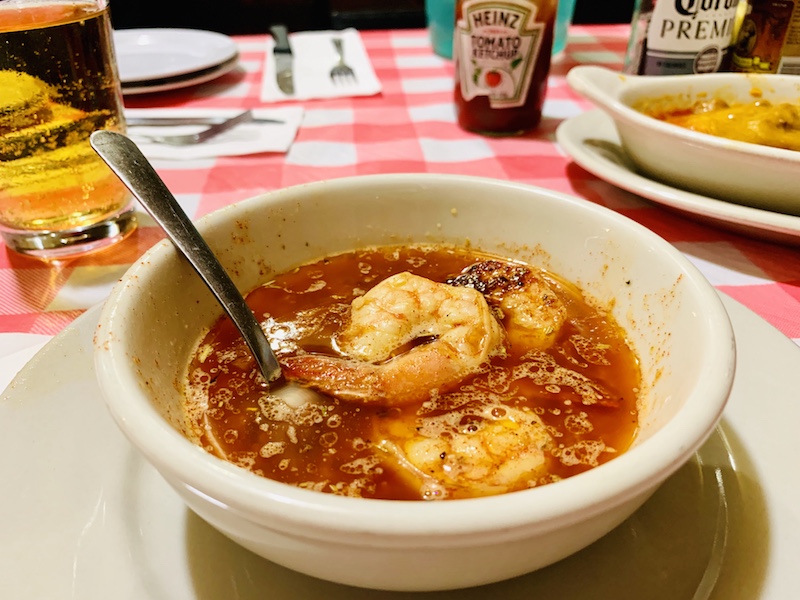 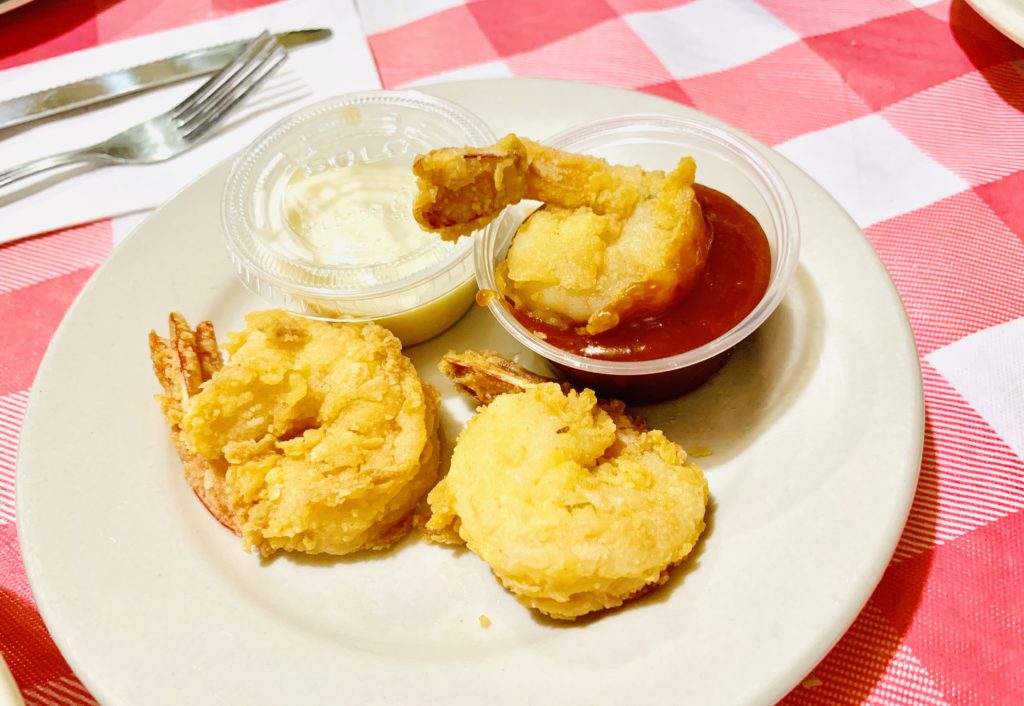 Both preparations were incredible and I was glad Debra insisted that she bring us a plate of garlic bread for dipping in the boiled shrimp juice. I was beginning to see why Doe’s was a James Beard Foundation Award winner and we hadn’t even sampled a steak yet.

The lettuce salad at Doe’s

Before the main course, we were treated to Doe’s classic salad which has become a treasured tradition of the Doe’s experience. Doe’s aunt, Flo, made the salads here for years, until she was in her 90s. The night we were there, Pat was in charge of the big salad bowl. 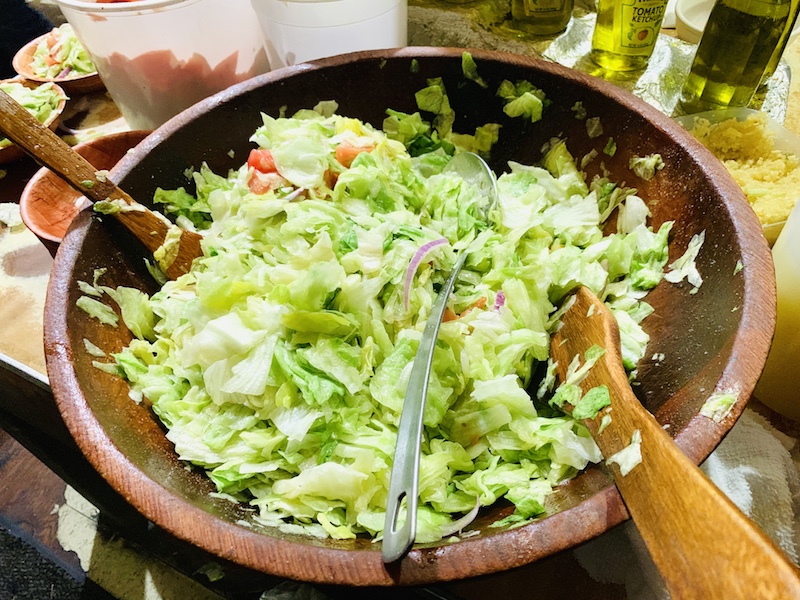 Every half hour or so, we watched her dump a large bag of iceberg lettuce into a wooden bowl. She added chopped tomatoes and red onions and then dumped a glass of lemon juice into the bowl. Lastly, she added a Heinz ketchup bottle filled with a mixture that she said was half olive oil and half vegetable oil. Just a  generous amount of table salt and the salad was almost ready. Using two wooden spoons, Pat chopped the salad and mixed it together before filling small wooden bowls to overflowing. 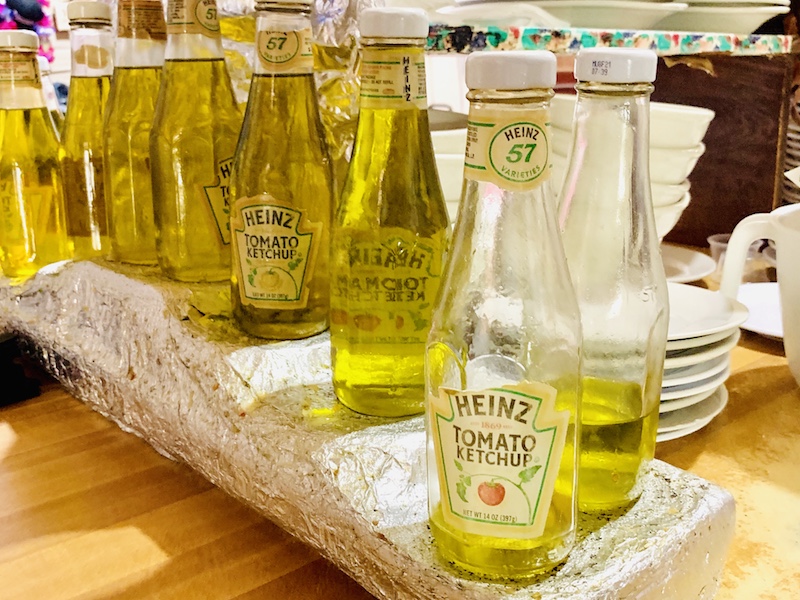 Finally, the steaks at Doe’s

Of course, the main reason people come to Doe’s is for the steaks. They serve a 10-ounce filet, a two-pound, bone-in-ribeye, a two-pound t-bone, a two-and-a-half-pound porterhouse, and a three-pound sirloin (for sharing). You get skillet fried fresh-cut French fries on the side, period. Don’t even think about asking for a baked potato. 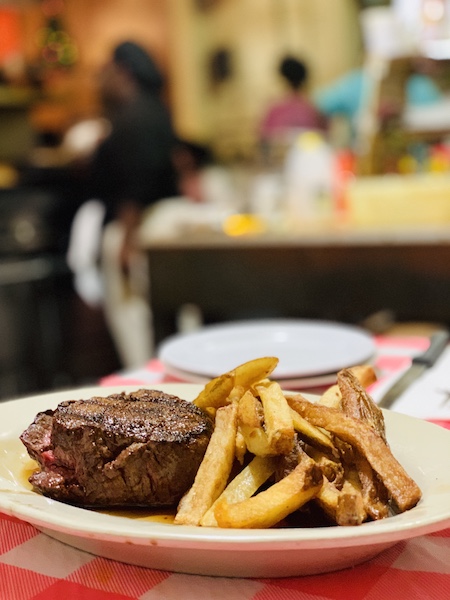 I ordered the filet and Steve had the two-and-a-half-pound Porterhouse steak, which barely fit on his plate. Although both were delicious, we did not even come close to finishing them, as the portions were huge. 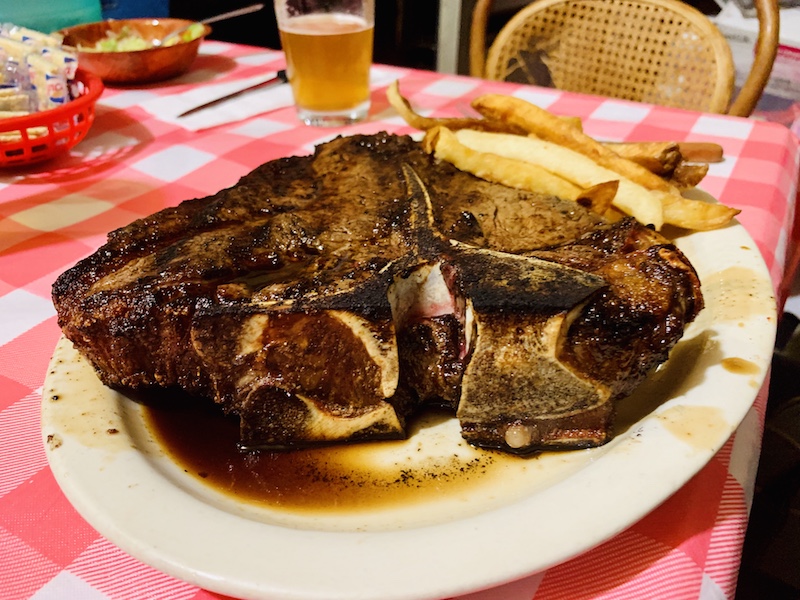 At the end of the meal, we tried a few bites of salted caramel cheesecake dessert, threw in the towel and began to say goodbye to all our new friends at Doe’s. We chatted with Gail as she loaded handfuls of freshly cut potatoes into the fryer and thanked Debra for her outstanding service. We gave Pat a hug and she even let me chop for salad a bit – a real honor.

As we made our way through the prep area and into the kitchen toward the front door, I couldn’t help but stop for one more look at the steaks sizzling in that old broiler which is still going strong after all these years. 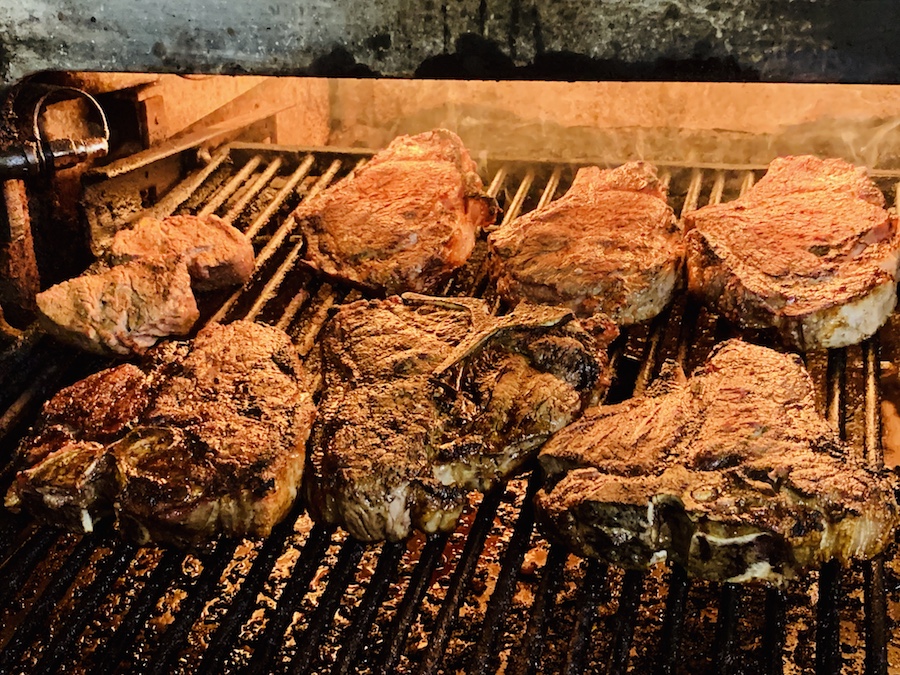 As we opened the door to leave, I smiled as I saw a group of new folks walking in for the first time. They had the same reaction I did and just needed a minute to take it all in. 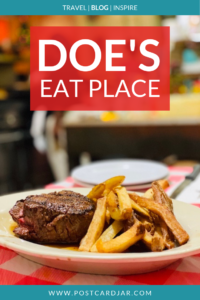