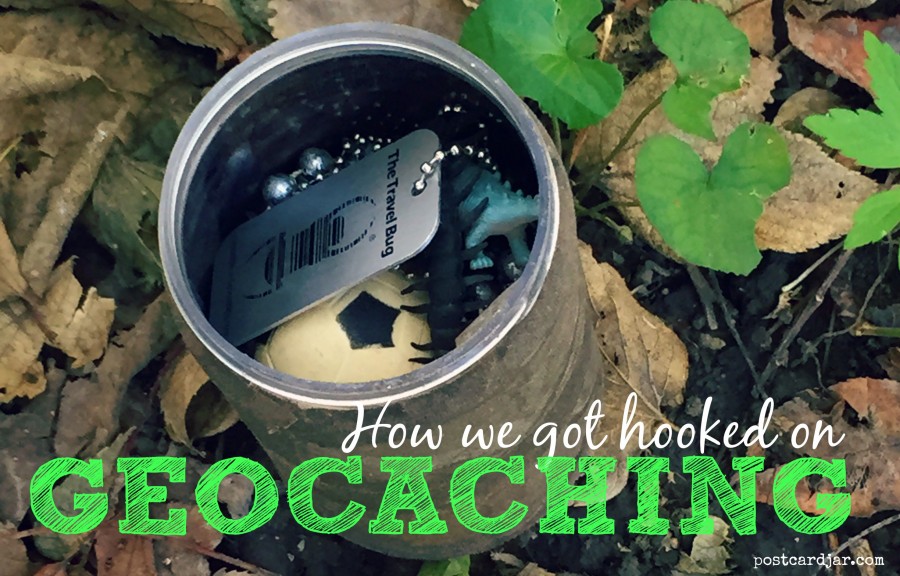 A few months ago, I found myself belly-crawling through the dirt under a merry-go-round.  Looking up at the underside of this playground staple, I reflected on how I willingly came to be in such a position for the first time in over thirty years.  I grunted, contorting my six-foot, four-inch,  42 year-old, slightly-heavier-than-it-should-be frame to better study the merry-go-round’s support structure. As I lay prostrate, hoping I wouldn’t knock my head on something, I spied my goal–a small metal case that had once held cigarettes but now held a tiny slip of paper and a pencil.  Victory! I found the Geocache. 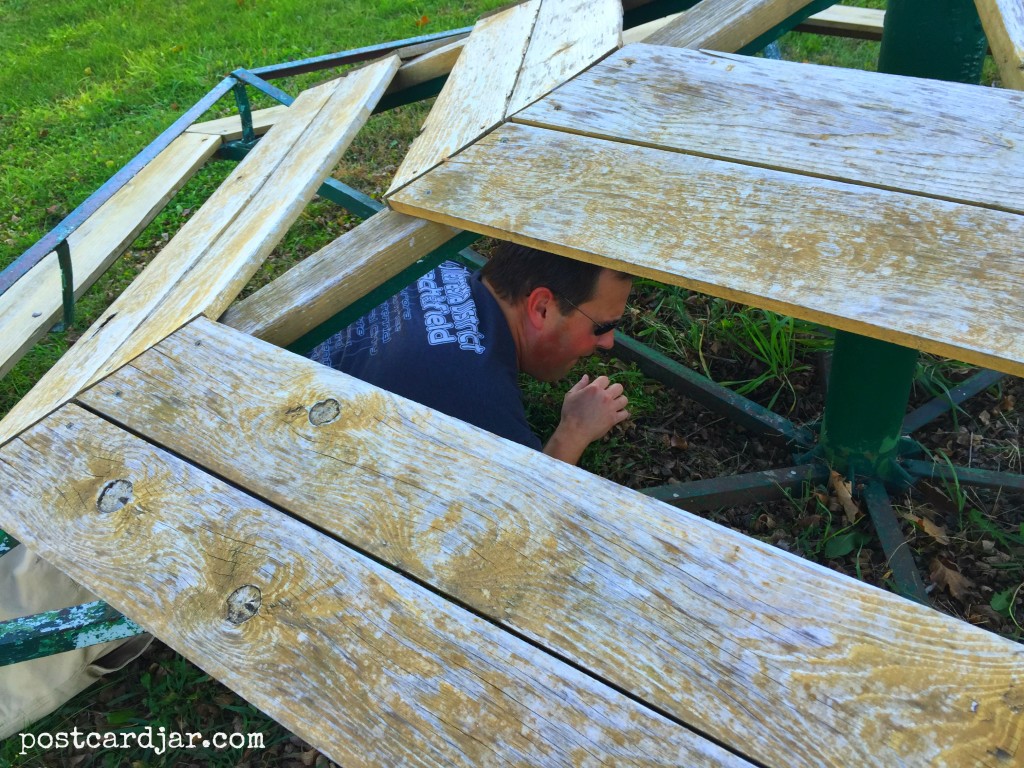 Crawling under an old merry-go-round in Crete, NE.

Returning from the Mayo Clinic last fall, we got hungry for lunch.  We pulled off I-35 in northern Iowa into a “prairie area” we’d not yet explored hoping to find a quiet, pretty spot to enjoy a picnic lunch.  As Ann was preparing our sandwiches, I headed back to our car to grab something.  Suddenly, an older gentleman called me over to his car.  Let me pause in my storytelling here to go on record as saying that I don’t normally approach older men at rest areas on interstates.  I only went over because he called me and my Nebraska politeness kicked in before I could think.  Long story short, he told me to look at the left end of a sign near our picnic table.  He said there was a capsule there that I should look at, that it contained the names of people who’d found it before. 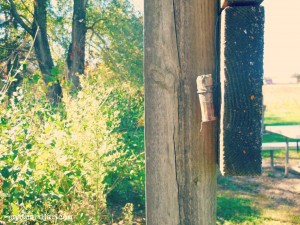 The Geocache was a small, pill bottle wrapped in tape and secured to the back of a sign with wire.

I said I’d look, and headed, intrigued, back to where Ann was and together, we looked behind the sign. There, hanging by a wire, was a plastic pill bottle wrapped in camouflage duct tape.  We opened it, and entered the world of Geocaching.

Geocaching started years ago when the U.S. government first allowed civilian use of GPS technology.  No sooner was the system turned on, than a guy went and hid something in the woods, challenging others to find it.  People did, and wrote on-line about their experiences.  Soon many more found the item, while others hid still more items for people to find.  They gave the practice the name “Geocaching” combining the idea that the world, “Geo,” is the playing field and you have to find the hidden “caches” of goods.

Back to our rest-stop pill bottle.  Inside, there were several tattered strips of paper filled with the names of people who’d already found this cache along with the date they were there.

We jotted “Postcardjar” and the date on the paper and were hooked.  Right after we got back in the car, we download the app to Ann’s phone so we could play, too.

Now as we drive down the road, we check to see if there are any caches nearby.  If there are, their location (latitude and longitude) are displayed along with information about the cache.  (The app even gives us a handy line to follow.)  Here’s the catch:  You are directed to the exact location of the cache, but then you have to find it. 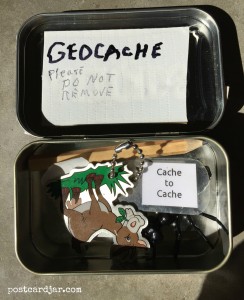 A small Geocache made of an Altoids box.

Some caches are very small, others are big.  All are hidden to some degree…some better than others.  And you have to be discreet when looking, as geocachers don’t want “muggles” (non-geocachers) to know what they’re doing.

There are a lot of caches out there, somewhere in the neighborhood of 2.5 million.  They are hidden right out in public, sometimes in plain view.  Every day, hundreds or even thousands of people might pass by these caches without knowing they exist or giving them a second thought.  I guarantee you’ve gone by hundreds of them without knowing.  The best part is that anyone with a handheld GPS (or even a GPS equipped smartphone) can play along.  You just have to want to take a few minutes away from your car to explore someplace new–like the underside of a merry-go-round.

Have you tried Geocaching? Let us know about your experiences. We’d love to hear from you.