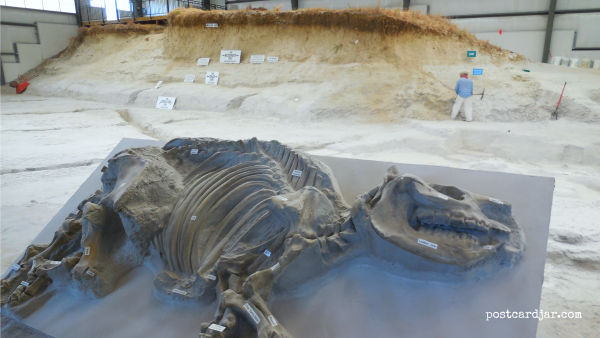 Ashfall Fossil Beds is located somewhere along Robert Frost’s “Road Not Taken” outside of Royal, Nebraska (population 63).  The truth is the road to this place should be taken.  By everybody.  Ashfall, discovered under a cattle pasture, is unlike anything you’ve ever seen or likely will ever see. 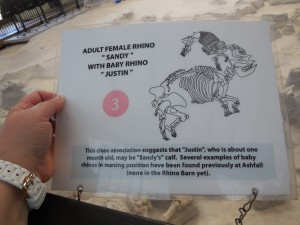 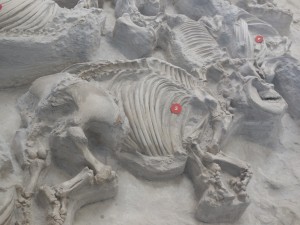 About 12 million years ago, some prehistoric animals (like barrel-chested rhinoceroses, and three-toed horses) were hanging out, minding their own business when a giant volcano erupted in Idaho and spewed forth about 25 bazillion tons (give or take) of volcanic ash.  The animals (clear over in Nebraska, mind you) had no place to hide, no shelter, and no way to filter this cloud of volcanic ash (which was basically finely powdered glass dust).  They slowly suffocated near a pond–likely the only source of water around.  As they succumbed to the choking thick clouds of ash and died, they fell into the water and were buried in still more ash.  A few corpses were scavenged by some saber-toothed something-or-other, but not many, so the bodies really didn’t move much at all.

Let’s pretend for a moment that you have a budding paleontologist in your family.  Now let’s pretend you don’t.  Now let’s forget all that because you simply MUST go to this place whether you have an interest in paleontology or not.  I truly think I can safely say that there is no where else on Earth where you will find so many complete skeletons of prehistoric animals piled on top of each other that are still on the ground in the EXACT SAME SPOT where they fell and died 12 million years ago.  These are so well preserved that the scientists can even tell what these animals ate the day they died!  The paleontologists here haven’t tried to move much of anything.   Instead, they just built a building right over the top of the fossil beds, protecting the fossils from the elements, and providing a great place for visitors to stand to marvel at the phenomena that is right in front of them. 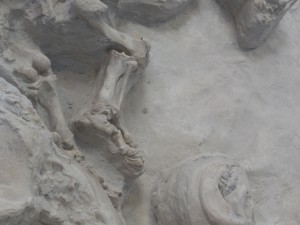 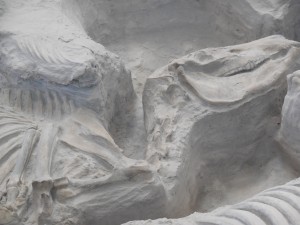 Paleontologists are still at work excavating at this site.  If you visit in the summer, you can talk to them and their student interns as they work.  Slowly, delicately (with paint brushes if need be) they remove small layers of ash as they hunt for more fossils. They expect it will be about 25 more years before they are done excavating inside the building.

The Ashfall Fossil Beds State Historical Park is well designed, informative, easily accessed by everyone and is just plain cool.  A Nebraska State Parks Daily Use Permit is required for your car, and there is a small admission charge.  Because it is so unique and so fun to visit, it comes in at #5 on this year’s list of Nebraska’s Nicest Nine.