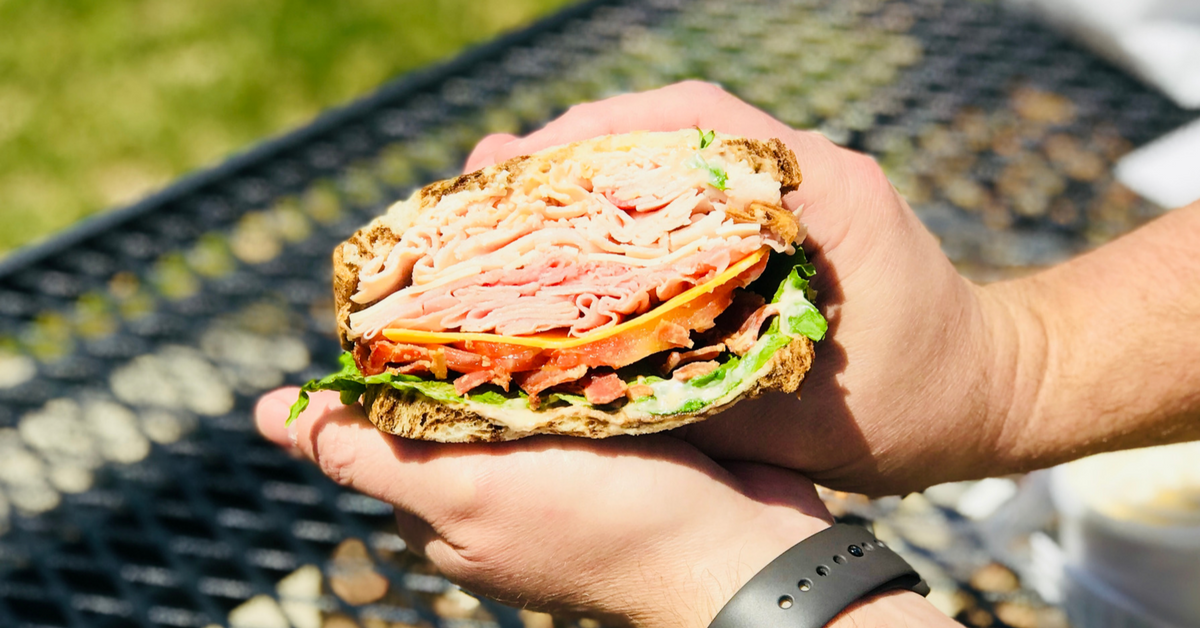 Trip Advisor’s #1-ranked restaurant in Clear Lake, Iowa, is only open 17 and a half(ish) hours a week.  Might not seem like the best business model, but the sisters who own and manage Starboard Market have made it work quite well in this quaint Midwest town – for 19 years and counting.

That’s right, since 1999, this unique deli has used fresh ingredients, creamy homemade salads, and the smell of freshly baked cakes and cookies to lure locals and tourists through the door.

The cheery staff and memorable flavors have kept them coming back for more. 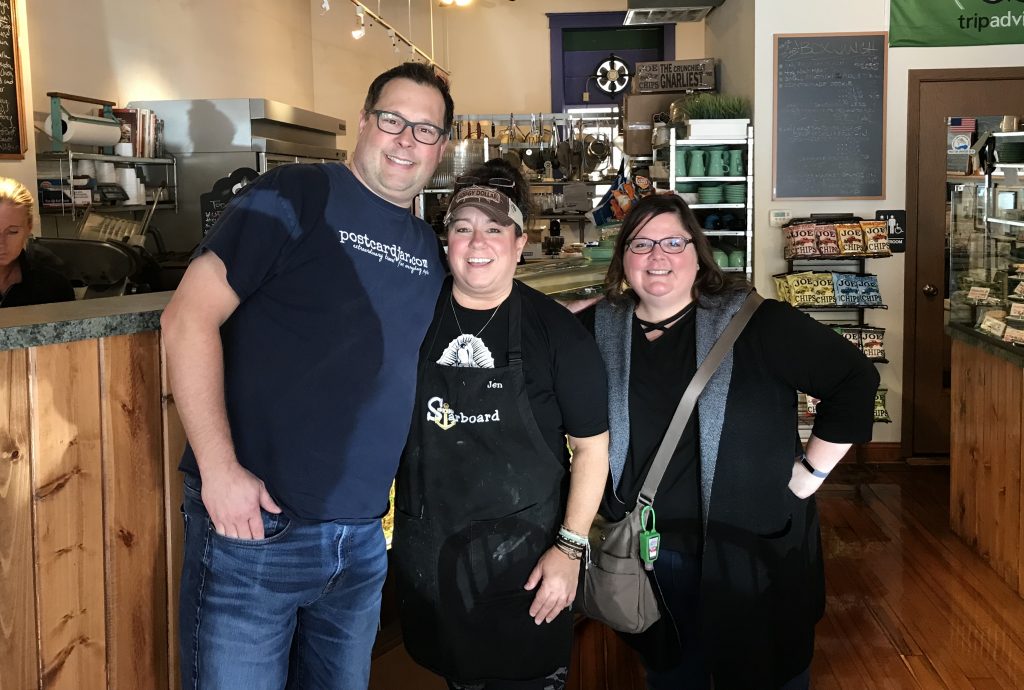 Steve and Ann pause for a pic with Jen of Starboard Market.

We stopped in Clear Lake on a recent trip home from the Mayo Clinic in Minnesota. Our friend and fellow blogger, Sara Broers from Travel With Sara, encouraged us to stop, texting to alert us of the short hours and promising it would be worth taking the exit off Interstate 35. 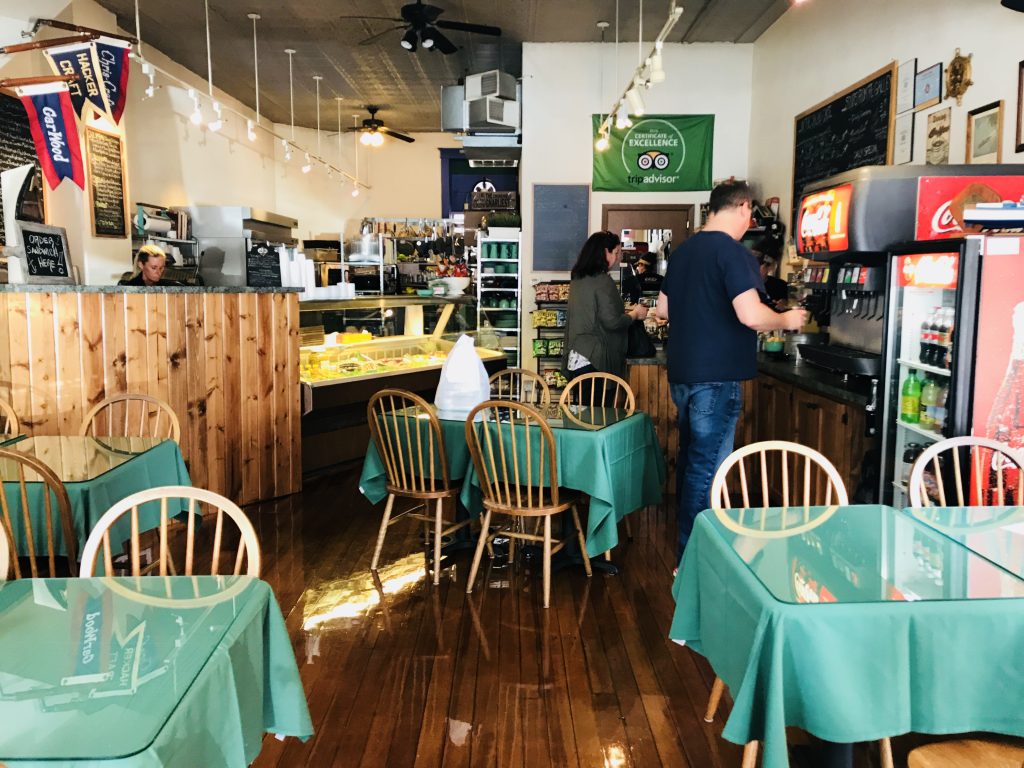 Starboard Market is a quaint little restaurant popular with locals and tourists, alike.

We arrived just before the lunch rush and had the pleasure of meeting owners Jennifer Coffman and Katie Poole along with their small staff. Having had a late breakfast, we opted to get boxed lunches for the road. 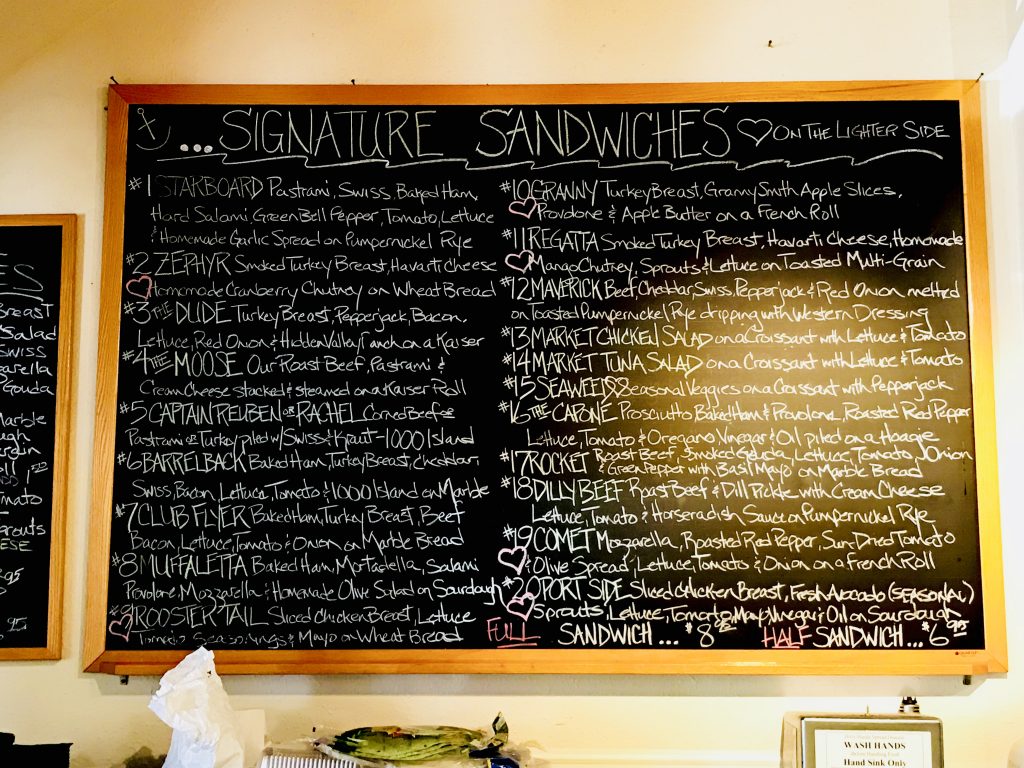 The menu board at Starboard Market.

A huge chalk board menu displayed 20 signature sandwiches and sensing we were having issues with indecisiveness, an employee named Maddy told us numbers three and six were the most popular.

Named after one of the sisters, who was affectionately called “Dude” for years, The Dude (#3) is a turkey breast sandwich with pepperjack cheese, bacon, lettuce, red onion, and Hidden Valley Ranch dressing on a Kaiser roll. 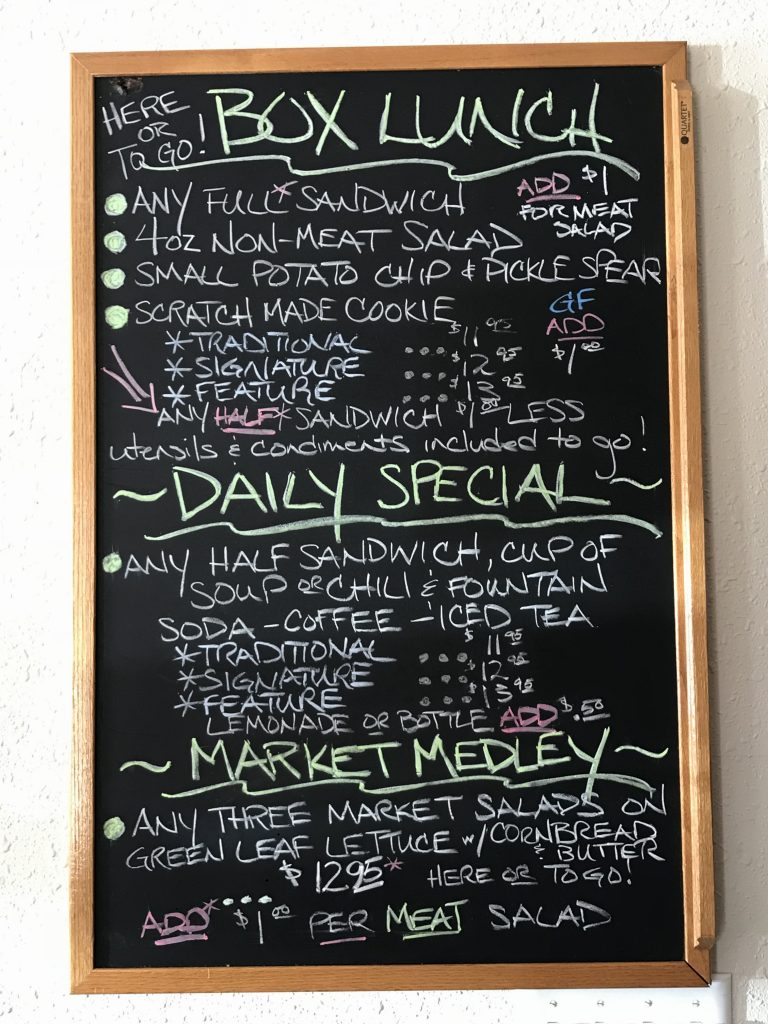 The box lunch is a great way to enjoy fresh food to go.

Steve ordered the #6 Barrelback which was baked ham, turkey breast, cheddar, swiss, bacon, lettuce, tomato, and Thousand Island dressing on marble bread. I chose the #11 Regatta which is smoked turkey breast (and lots of it), Havarti cheese, Caribbean mango chutney, alfalfa sprouts and lettuce on a toasted multi-grain bread. It was delicious. 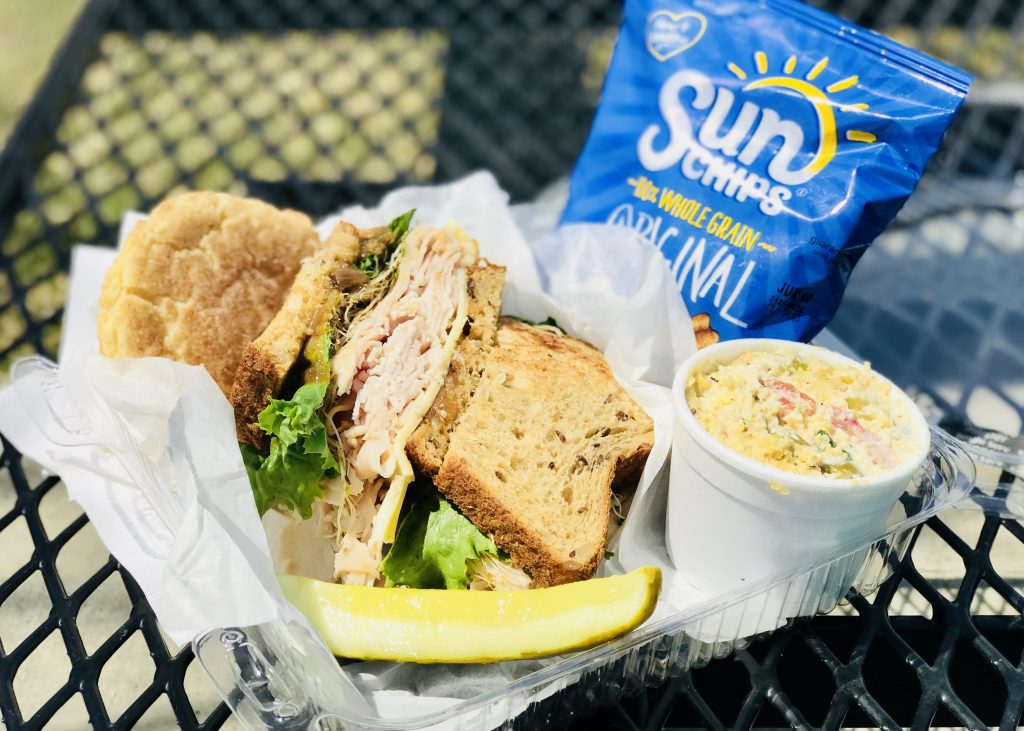 The lunch boxes are served with any of the meatless salads, chips, a dill pickle spear and a homemade cookie. We chose the potato salad and a cornbread salad, both from Jen’s mom’s recipe collection and perfected by Katie. 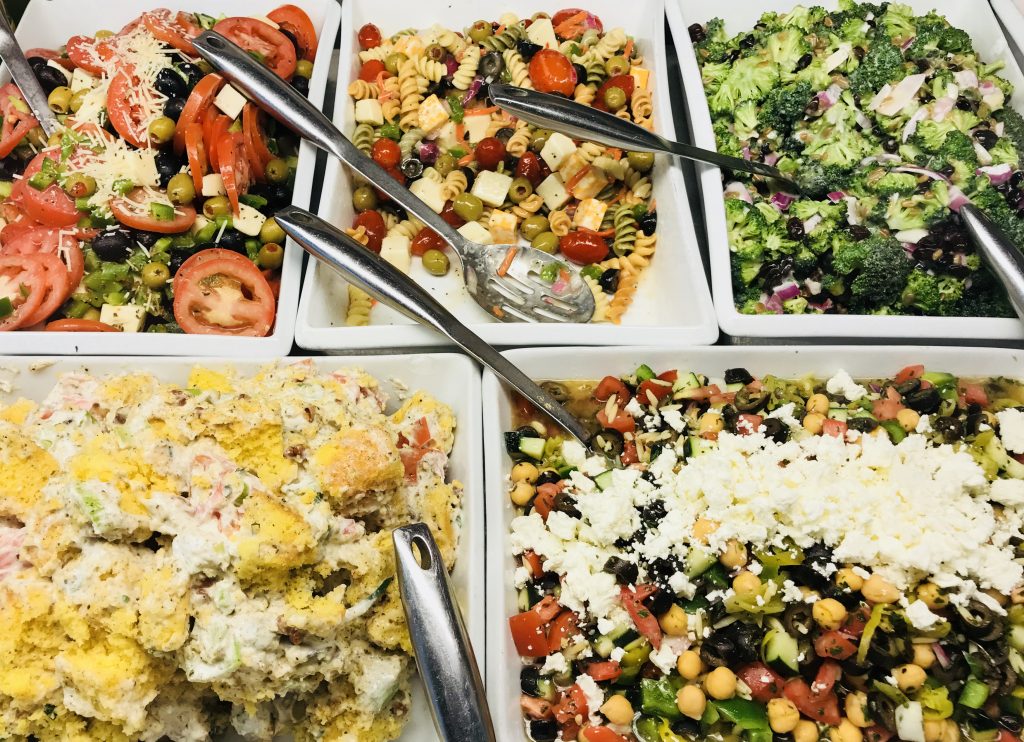 Some of the delicious salads available at Starboard Market.

With lots of choices, it was also difficult to decide on a cookie for dessert. We decided to split the snickerdoodle and peanut butter chocolate chip cookies. 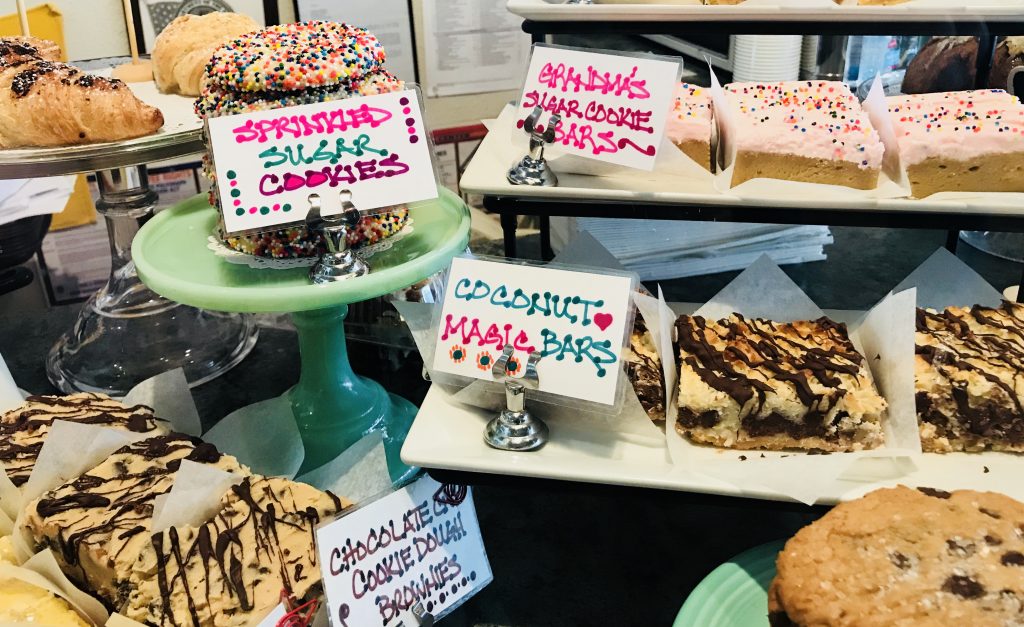 A couple hours later, we stopped at one of Iowa’s stellar rest areas (seriously, they are clean, bright, modern and have Wi-Fi) for a picnic lunch. We had a lot of food, so we held off on the cookies, knowing they’d be a welcome treat a few more hours down the road. 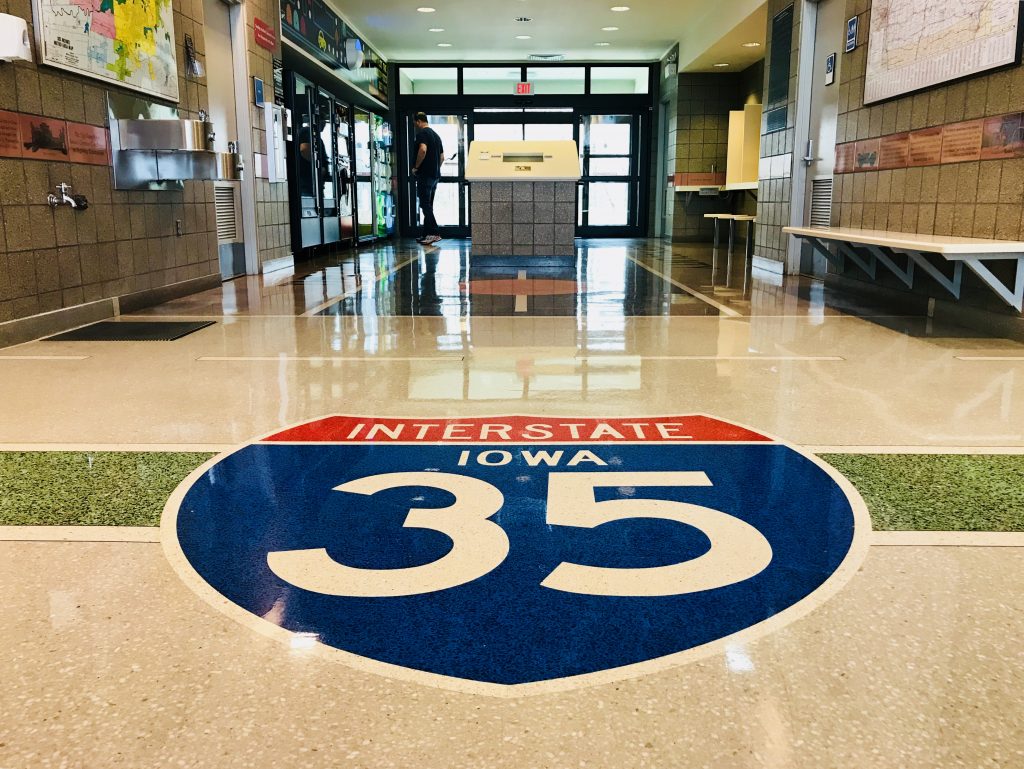 We stopped at this wonderfully clean rest area in Iowa. 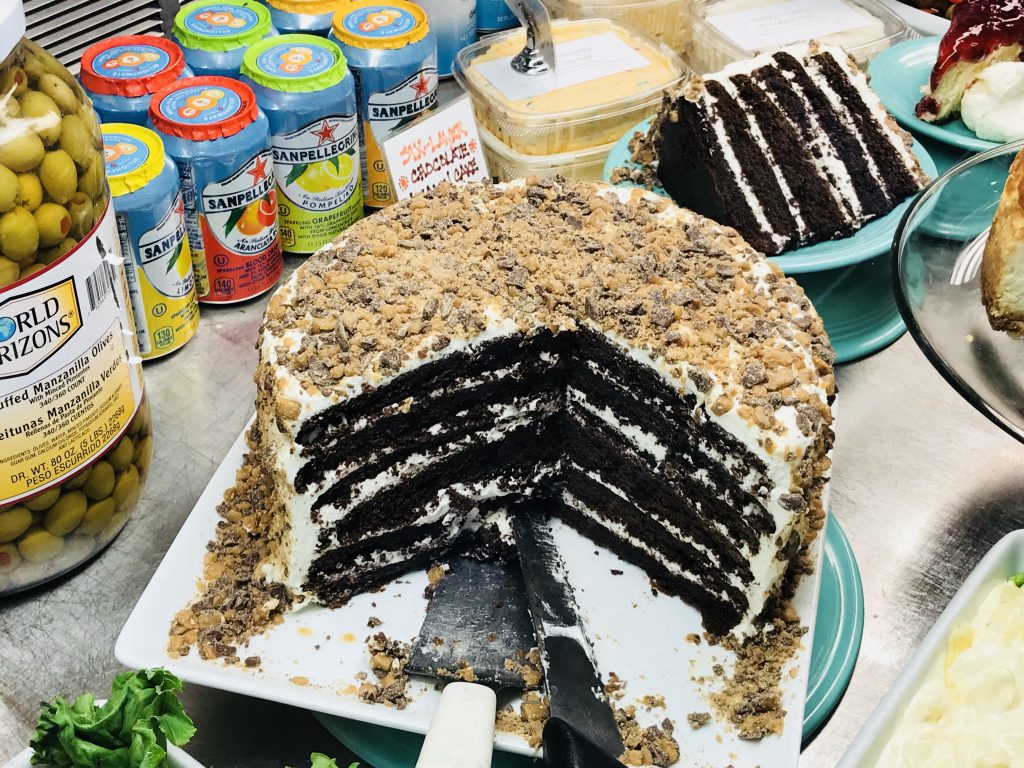 Oh, they also offered a beautifully made Bundt cake called Ruby’s Fresh Apple Cake. It is named after Jen and Katie’s grandmother, Ruby, and the boiled coconut topping with cracked walnuts helped make this cake a favorite of the ladies’ grandfather. 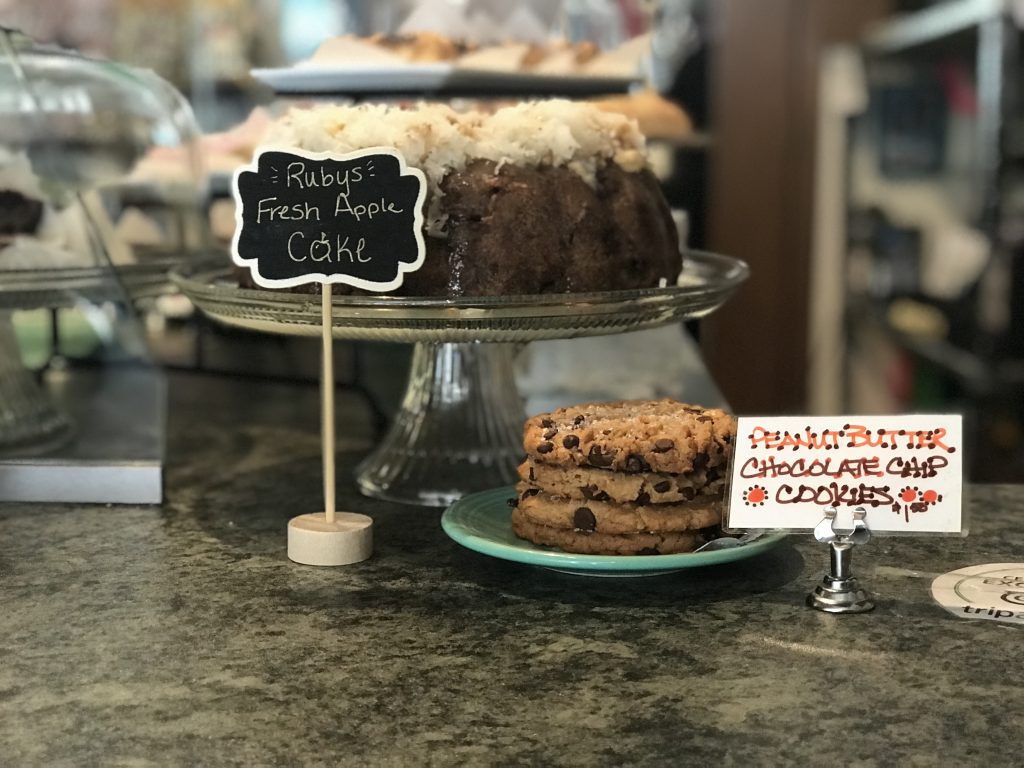 We didn’t try the cake, but the peanut butter chocolate chip cookies were as good as they look!

The cake, and so many other things, are all wonderful tributes to Jen and Katie’s parents who, with their daughters, started this store. Sue and Roger Poole had been living and working in Des Moines and had initially dreamed of opening a family deli in Northern Michigan where the wooden boats that Roger enjoyed restoring were plentiful. 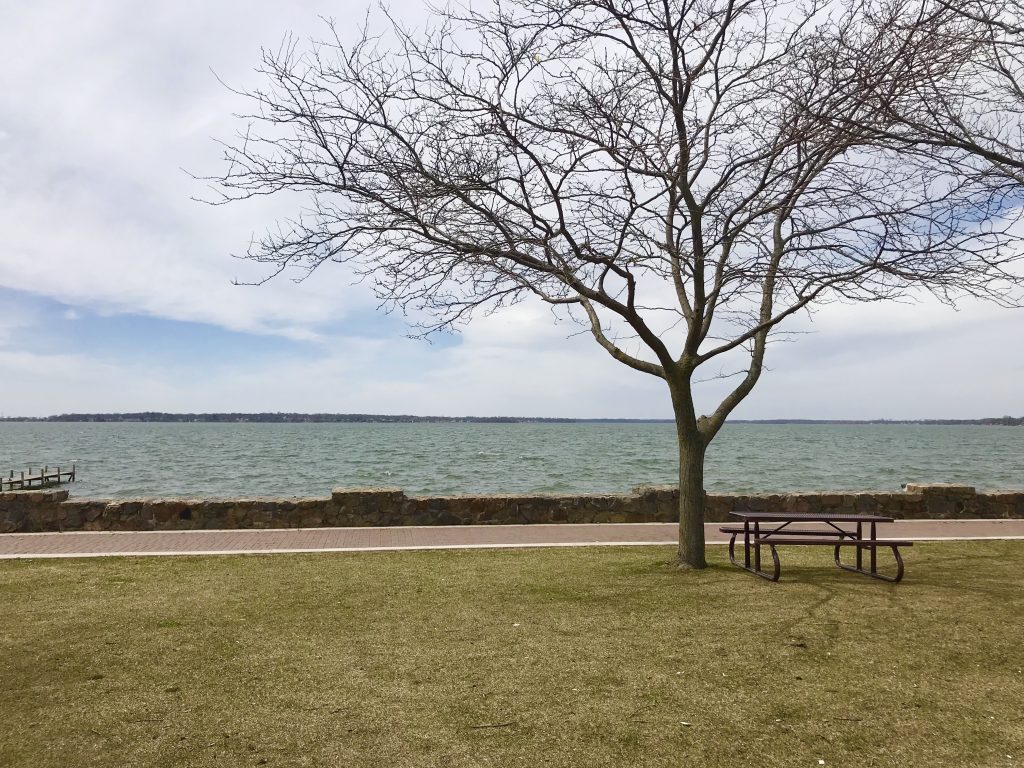 A park overlooking Clear Lake is about a block from Starboard Market making it a great place to enjoy your box lunch.

However, while traveling home after visiting an antique show, the couple decided to get off the Interstate at Clear Lake for a meal. They saw the waterfront, liked the small town atmosphere, and drove by a charming little house that was for sale by owner. 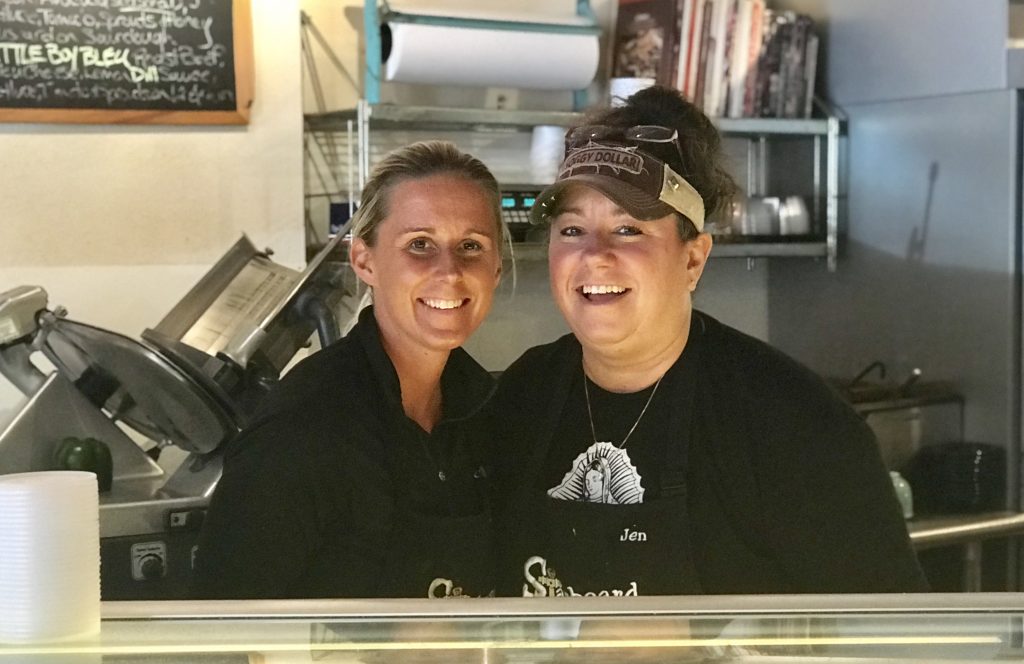 Sisters Katie and Jen own and run Starboard Market.

Jen’s mom and dad came to Clear Lake to help. Roger, who was almost ready to retire from Union Pacific, suddenly went from UP Railroad executive to head dishwasher, and a successful family business was born.

Starboard Market is open Tuesday through Saturday from 11 (ish) a.m. to 2:30 (ish) p.m. By 10 minutes ’til noon, you’ll see a line forming at the counter and the staff hurriedly making sandwiches and pouring soups, served on sea foam Fiestaware with real forks and spoons. Don’t let the short hours fool you, though. The staff works full-time preparing all the salads and desserts from scratch as well as catering local events. 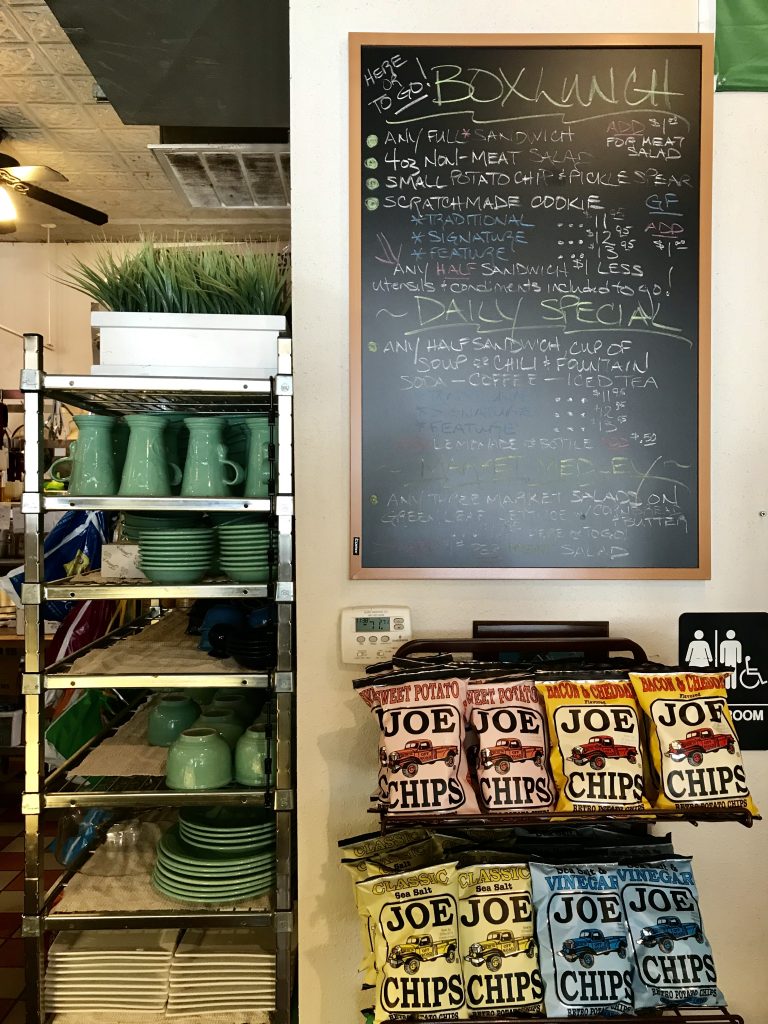 Jen says one of the keys to the success of Starboard Market is consistency. They have a small staff (5 or 6 during the busy season) and little turnover. The soups, salads, and sandwiches don’t change much, in part because the same people make them most days.

After finishing our boxed lunch (and trying the cookies later that afternoon) we wouldn’t change a thing. If Jen, Katie and team keep this up, we expect their #1 Trip Advisor ranking will also remain consistent. 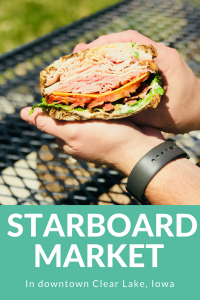