The secret to The Village Pie Maker pies 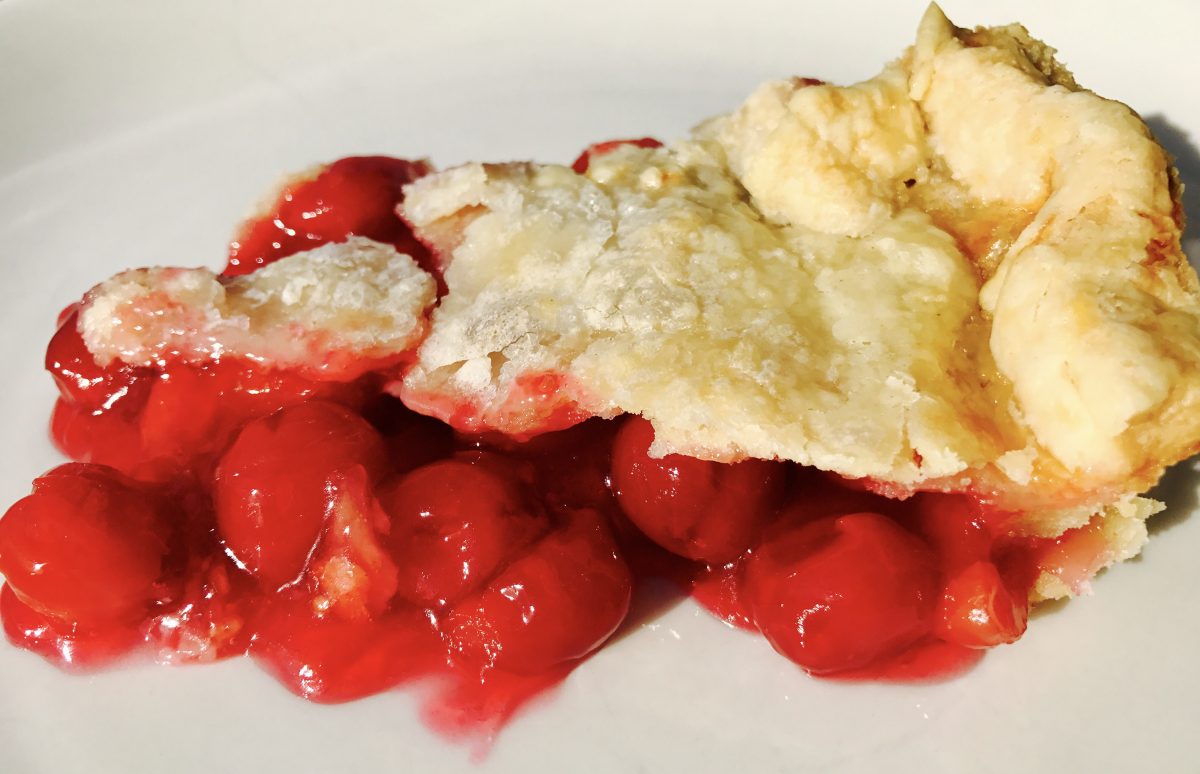 Note: Since the publication of this post, Village Pie Maker was sold to a new owner, and the pies are now made at a facility near Omaha, Nebraska. We’ve tried the pies since the sale, and they are just as good now as they were then.

I am the first to admit, I am not a baker. I don’t bake homemade bread, or cinnamon rolls, or cake. And Lord knows, I wouldn’t even think about trying to make a pie other than a chocolate one with three ingredients and a store-bought graham cracker crust.

While I’m a pretty decent cook, I am admittedly a terrible baker, most likely because I never follow a recipe. So I just don’t bake. And honestly, I don’t need to.

Whenever we have guests for dinner or a special holiday celebration at our house, I simply go to the freezer, take out a pie from The Village Pie Maker, bake it for a little more than an hour, and voila — our guests savor bite after bite of the best fruit pie they’ve ever tasted and I can say (without lying) that I baked it myself. 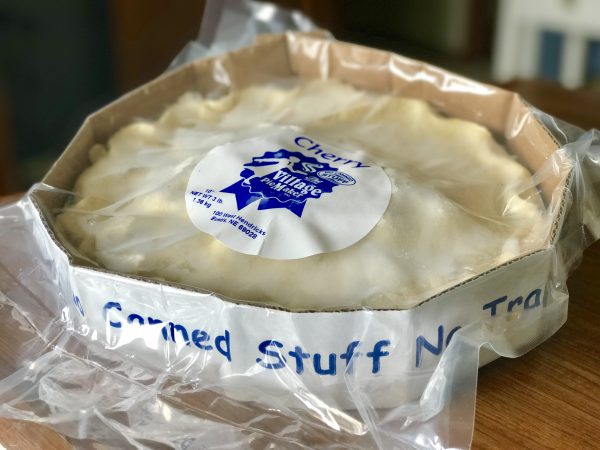 A frozen Village Pie Maker Pie. No canned stuff in this masterpiece.

We’ve enjoyed The Village Pie Maker pies for years and I’ve always been curious about the company, headquartered about 170 miles west of here in the small, rural village of Eustis, Nebraska. So, when we headed out on a week-long vacation across Nebraska this summer with Steve’s mom and dad, I looked into touring The Village Pie Maker operation and sadly, found that they don’t give tours. 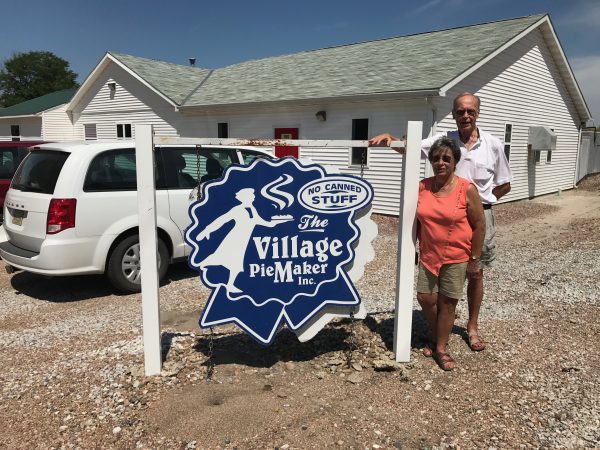 I spoke with one of the businesses partners, Rob Hartman, who told me they get several calls each week asking about visits, but because they are a small operation and are not set up for spectators, they cannot accommodate tours. However, since we were inquisitive travel writers, he was willing to meet us at the shop, answer some questions, and give us a brief sneak peek at how these delicious pies are made.

Here’s what we learned:

It started in a bedroom

The original Village Pie Maker is a woman named Judith Larsen, who began selling her homemade pies in 2002. Her company’s website says it was her grandmother who taught her to make pies.

“When my grandma was a young woman, about to marry my granddad, she had to go live with her future mother-in-law for two weeks prior to the wedding so she could learn to cook the way her future husband was accustomed. One thing she learned to make were pies,” the website states. “Once married, she made pies every day for the ranch hands, farm labor, and hay crews.”

Hartman said Larsen was selling pies at a local Farmer’s Market. To keep up with demand, she converted her grown son’s bedroom into an extra cooking space and little by little, the popularity of her pies grew. Larsen now lives in Arkansas, but was recently back in central Nebraska and was the keynote speaker for the Sumner School’s first career fair.

That’s right! About 25 workers gather weekdays to assemble pies in a super clean and organized kitchen. Last year, they made more than 460,000 pies and can produce up to 12,500 in a week during the busy seasons. Of course, fall is when most pies are made and sold, as they make the perfect dessert for special holiday celebrations like Thanksgiving and Christmas. 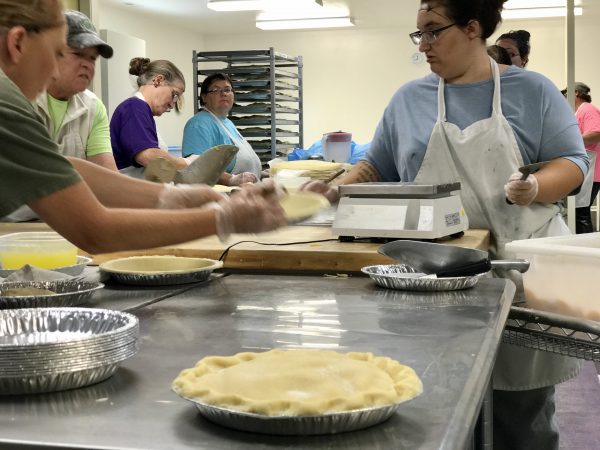 Workers at the Village Pie Maker fit the crusts to the pans by hand. 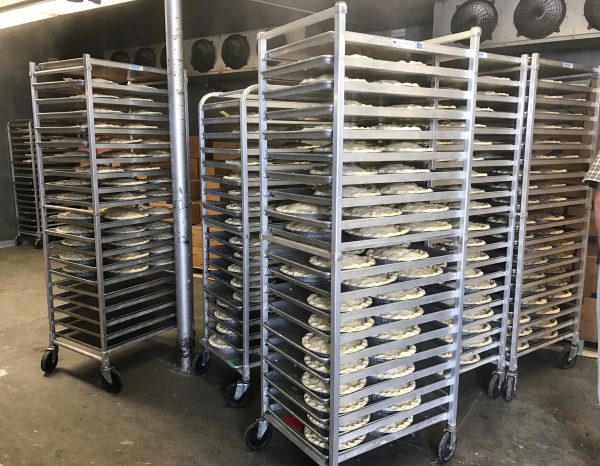 Now made, these pies freeze before being packaged and shipped.

For more than 11 years, Cynthia Wolf has been one of the first at the shop each day, arriving at 4:30 a.m. to begin mixing the dough for the 10″ pie crusts. Hartman could not say enough good things about the production manager, her strong work ethic, her management and organization skills. And, her innate ability to know just how much flour to add to the mix. “She says she does it by feel,” Hartman said. And her method works. 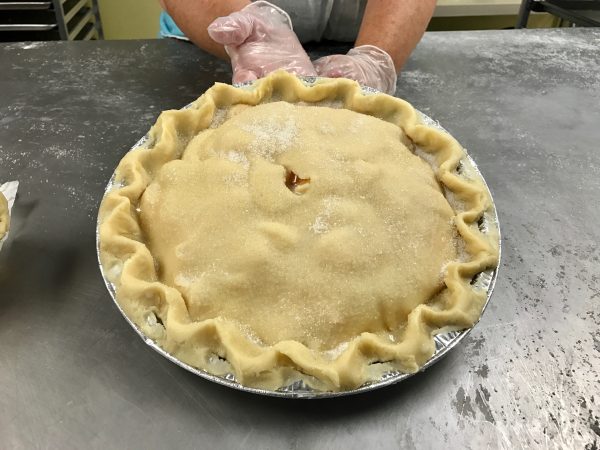 Is that an amazing pie crust or what? 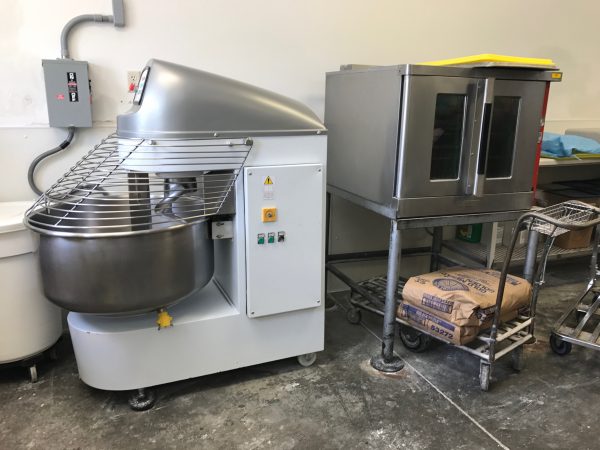 This mixer helps with the delicious magic at the Village Pie Maker.

By 6 a.m. when most of the other workers arrive, the dough is ready to be measured out by hand and pressed into foil pie plates and the pies are ready to be assembled.

Most of the work is done by hand

From making the dough fresh each morning, to putting the fruit filling in the pan, to crimping the crust and packaging the pie, almost all of the work is done by hand. Yes, they use giant mixers to prepare the dough and even the fruit, but a real person is operating those machines and real people move the huge containers of fruit, weigh the filling, measure the dough and assemble the pies. 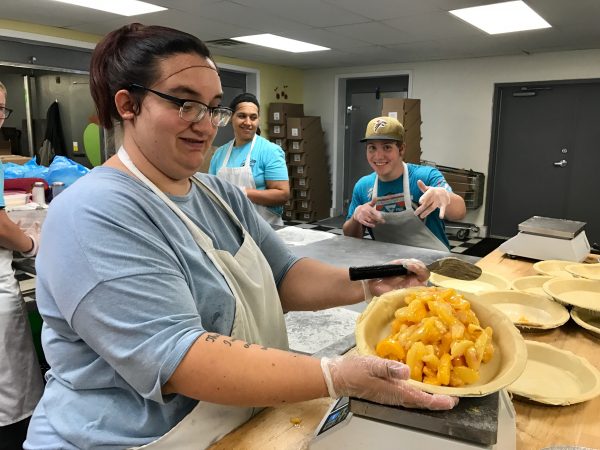 A worker displays a pie right before the top crust goes on.

Workers in the kitchen told us they rotate stations throughout the day so they aren’t doing repetitive motions for hours on end. They said they switch jobs about every 20 pies, taking turns weighing and measuring, filling the crusts, crimping, and shaking sugar on a each one before it is packaged.

Workers can crimp a crust is less than 4 seconds

Fruit is not cooked until it goes in your oven 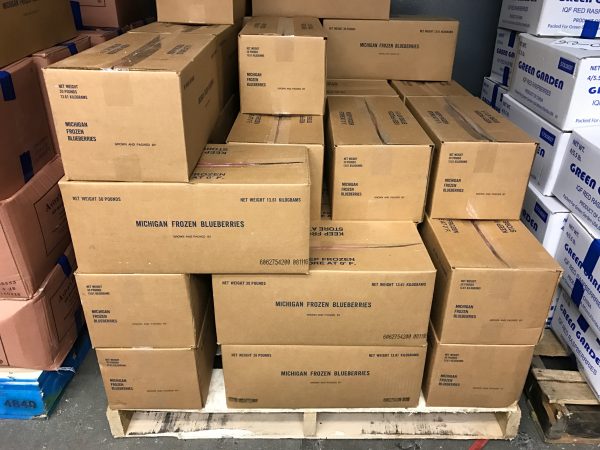 Boxes of fresh-frozen fruit wait to be turned into delicious pie filling. 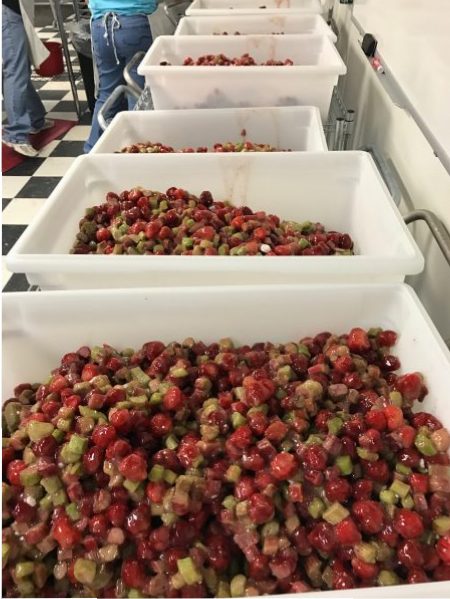 Fruit pie filling waits to go into pies at the Village Pie Maker, in Eustis, Nebraska

He said they have certain fruit growers they love and will reject shipments that don’t meet their high standards. He said once he tried ordering blueberries from a grower that offered the sweet berries at lower cost. They tested the less expensive berry when it arrived. It didn’t live up to their high standards so wasn’t used for the pies. “I learned,” he said.

They use real butter

About 200 pounds of it every day. No wonder the crust is so flaky and delicious. 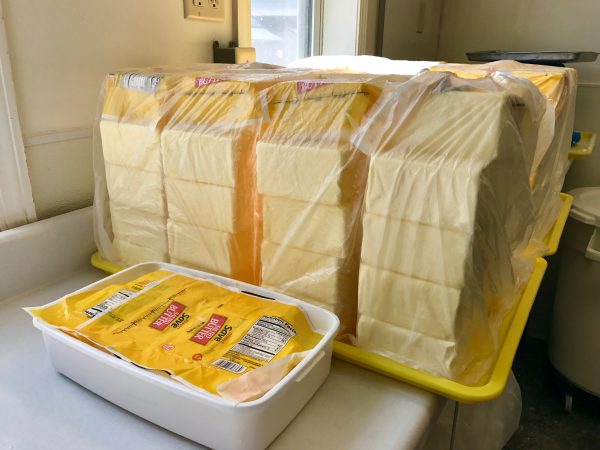 A stack of real butter waits to be used.

Cherry is the most popular

No surprise to us, cherry is the most popular flavor, according to Hartman, followed by apple and peach. While The Village Pie Maker makes at least 10 varieties of fruit pies, cherry, apple, peach, strawberry-rhubarb, berry medley, and blueberry make up 90% of their sales. Cherry has always been my favorite. It is made with bright red, tart cherries with just the right amount of sugar to add sweetness. Unlike some other cherry pies I’ve had, this one is chock-full of cherries so you don’t have to go searching for bits of fruit buried in some sort of processed filling. 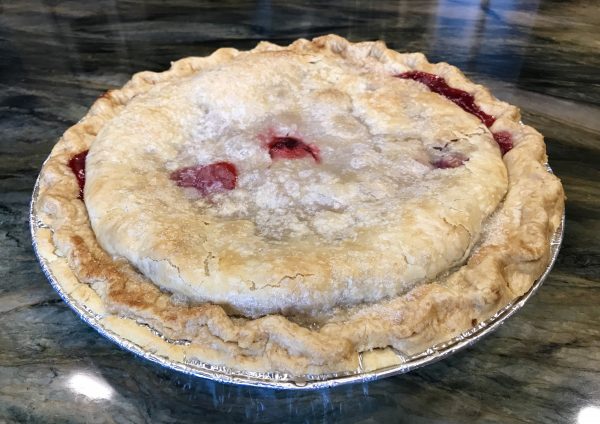 Apple is the second most popular flavor. It is made with crisp Granny-Smith apples with just the right spice seasoning to make it perfect for a fall meal or a summer picnic. The apples are sliced a bit chunky, so you taste them in every bite.

Other pies include blackberry, cran apple nut, raspberry-peach, and rhubarb.

Pies are sold in 17 states

Village Pie Maker pies are sold all over Nebraska where we live (thank you, Jesus) as well as 16 other states. Most of them are in the Midwest but they are also sold as far away as Kentucky and New Mexico. Grocery retailers Hy-Vee and Fareway carry them in some Nebraska and Iowa locations. To find the retail outlet nearest to you where Village Pie Maker pies are sold, CLICK HERE. 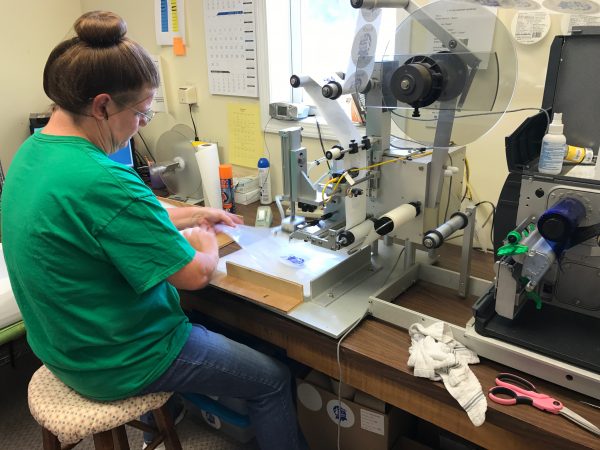 A worker affixes labels to pie packaging at the Village Pie Maker. 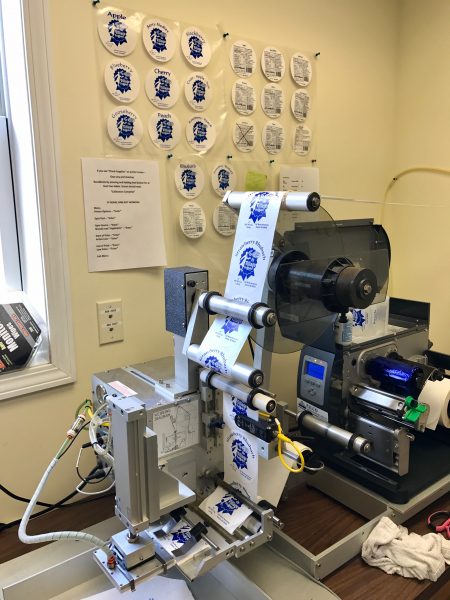 The machine that affixes labels to the packaging for the pies.

They’re made with love

We were so impressed with everyone we met at The Village Pie Maker. From the woman who was putting labels on packaging, to those filling pie crusts, and managing the kitchen, everyone was so nice. It was obvious to us that they work hard, help each other out, take pride in what they do and … yes, they have fun. 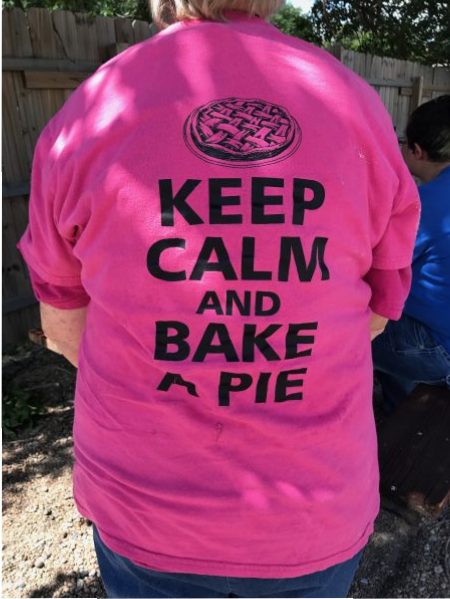 Loved this shirt one of the workers was wearing.

Finally … the secret to making the best pie ever

Before we left, I just had to ask Hartman the secret to making the best pie ever.  “Have a good recipe and follow it,” he said.

As for me, I’ll just take one out of the freezer. 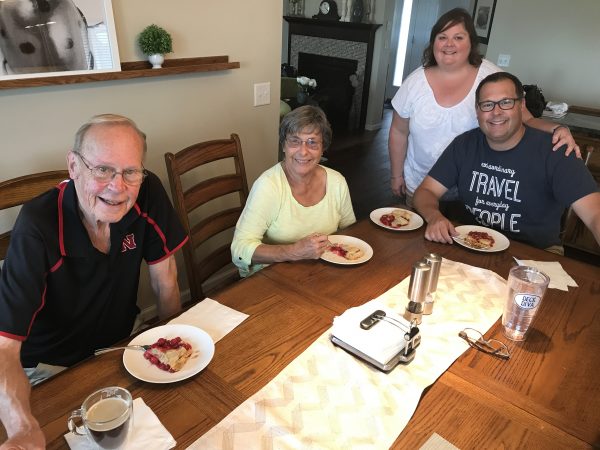 Have you tried The Village Pie Maker pies? Which is your favorite?