Actually, it is rocket science! Our visit to Space Center Houston 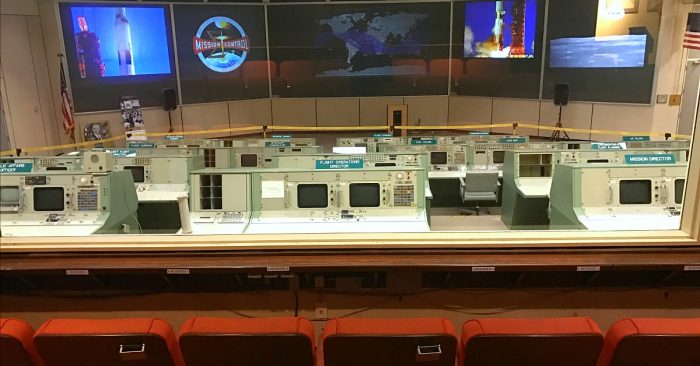 Space Center Houston is just what the child inside you wants it to be. As you drive up to the entrance, your view is dominated by a 747 with a space shuttle on its back. I mean, what could be cooler than that?

Earlier this summer, we took a week-long road trip south to Texas. We had taken tours of the Pioneer Woman Mercantile and Lodge in Oklahoma, as well as Magnolia Market and Harp Design Company in Waco, so I was ready for a change of pace away from cooking and home decor. Sure, we’d had great meals at the Merc and at Vitek’s BBQ, but I was ready to feed my brain and not just my face. 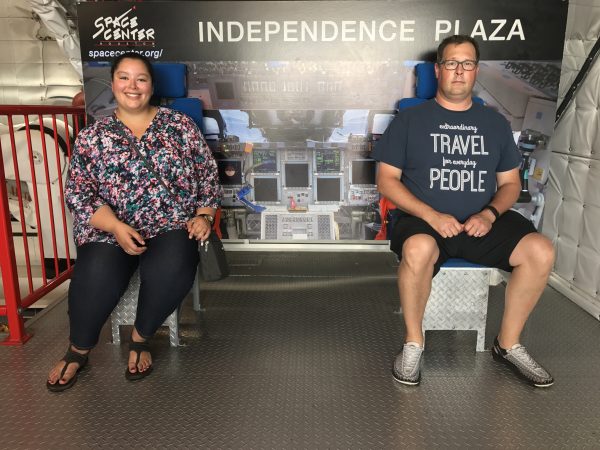 We arrived at Space Center Houston late in the afternoon, the drive from Waco having taken a bit longer than we’d planned due to toll roads and traffic around Houston. We arrived about two hours before closing, meaning that we got to park right up front in a spot vacated by someone who’d been there earlier in the day and had left; after a long drive, things were looking up!

We went inside and learned that the last tram to tour Mission Control would be leaving soon, so we quickly climbed aboard. (Quick travel tip here: when selecting a seat on the tram learn from our mistake and sit as far away as you can from the man who wants to talk loudly about alligators in the Louisiana swamp. This will give you a better chance at hearing the narration.)

The tram trundled across the grounds, stopping occasionally for gates to swing open. We went by large buildings with rockets painted on their sides and finally arrived outside a cement 1960’s-style office building labeled “Apollo Mission Control Center.” 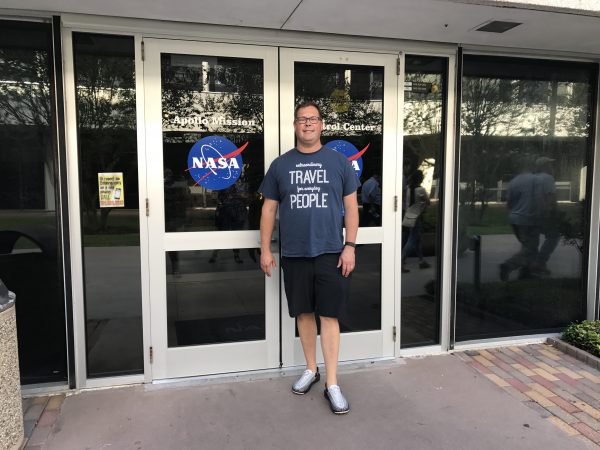 Steve standing outside the doors of the Apollo Mission Control Center.

We were ushered inside the building, up about 12,000 steps (there was an elevator available for those who needed it) and through a door. And there it was. Mission Control. It looked just like you remember from every film about the Apollo program you’ve ever seen. The room was in pristine condition, a window to the finest technology available in the late 1960’s and early 1970’s, when moon landings were taking place. Everything was there, just as it was when the mission controllers left the room 40 years ago, looking like they might return from a lunch break at any time. You could even see a red rotary phone sitting high atop a console–the famous phone with the direct link to the Pentagon used so often in movies where humans have to coordinate Earth’s defenses against hostile aliens. 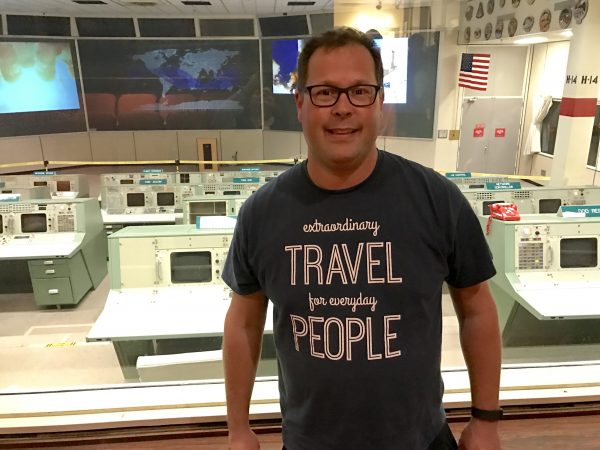 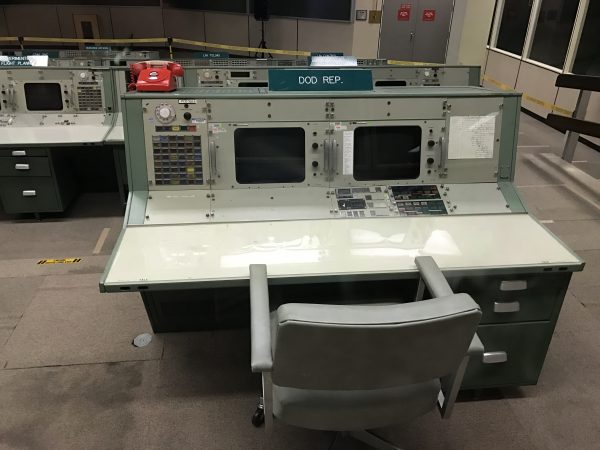 The “red phone” was a direct line to the Pentagon during the Apollo missions to the moon.

We were allowed into the VIP observation room for a quick orientation as to what we were seeing. We sat down in the same comfortable theater seating (complete with ashtrays) that was used by generals, high-ranking government officials, and family members of astronauts as they nervously watched moon landings unfold live. 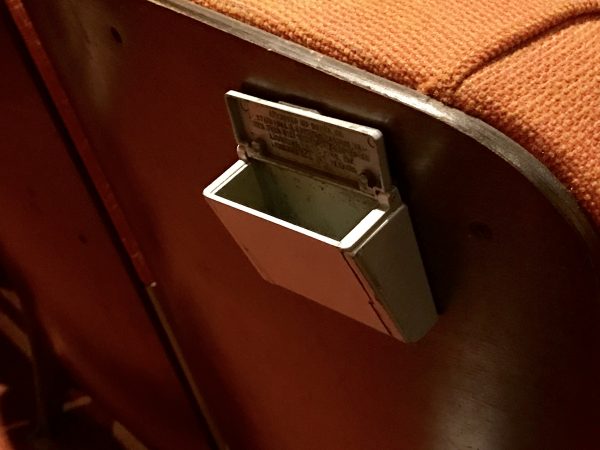 An ashtray is attached to a chair in the VIP observation room behind the Apollo Mission Control Center at Space Center Houston.

From Mission Control, we hopped back on the tram and set off for our next stop, pausing for a moment at a memorial for astronauts who have died while serving at NASA. We continued on our way and got to a large building that held a Saturn V rocket, the rocket that took the Apollo missions into space and then on to the moon. As you can see, it’s a pretty big rocket. Placed on its side, it would be longer than a football field. Note how I’m dwarfed by each of the five first-stage engines. 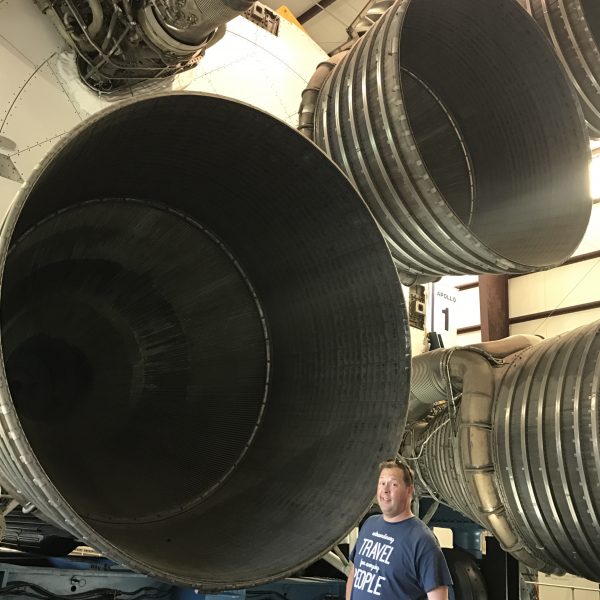 The engines on the Saturn V rocket used for the Apollo Missions were pretty big. 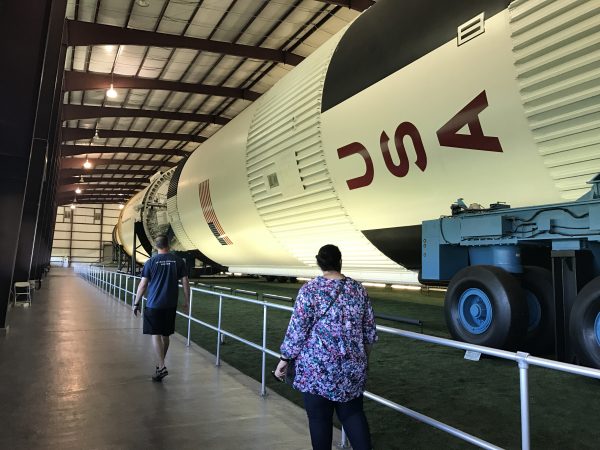 Steve and Meghan walk (and walk) alongside a Saturn V rocket –the rocket used for the Apollo missions.

From the Saturn V rocket building, we went back to the museum. Now, about 45 minutes before closing, we had to hurry to the exhibits we wanted to see. But, about 45 minutes from closing, there really were very few people left in the museum so we were able to move pretty quickly. We first went outside to that 747/space shuttle combination we saw when we parked. We rode the elevator up to the top and stepped aboard the mock-up of the space shuttle. Immediately I stuck my head inside the cockpit to take a look around. It’s amazing that people can learn what all those switches and buttons do. 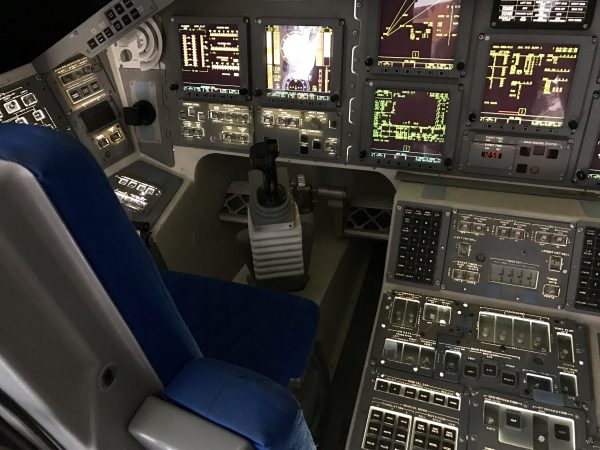 The cockpit of the space shuttle.

In addition to the cockpit, we saw a space suit as well as astronaut sleeping “quarters” aboard the space shuttle. The “quarters” consisted of a sleeping bag tied to the wall that would just float in the weightless environs of space. 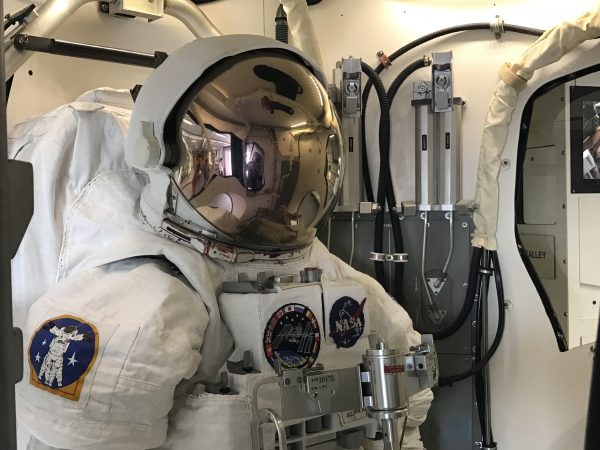 A space suit like those worn by astronauts aboard the space shuttle when they took space walks. 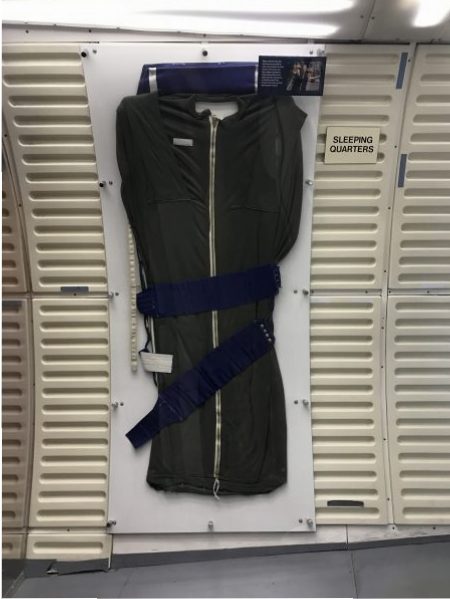 Sleeping “quarters” aboard the space shuttle consisted of a sleeping bag attached to a wall so the astronaut doesn’t float away.

Finally, we also saw the, um, facilities that astronauts used to answer the call of nature. I’ll just let you use your imagination on this one as to how everything works in the weightlessness of space where you don’t want certain things floating around. 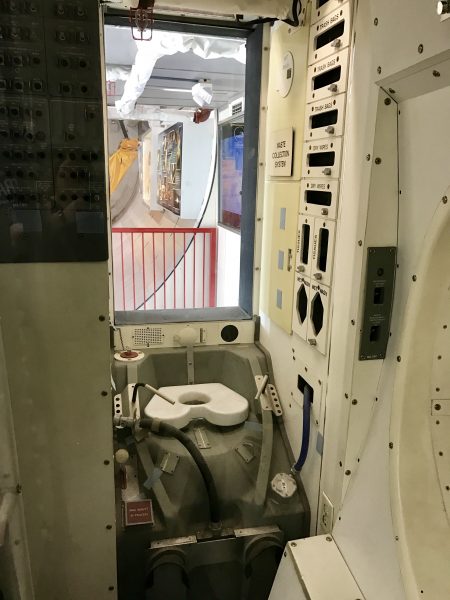 The restroom facilities look a little different on board a space shuttle.

Back inside the museum, we stopped at a number of other exhibits, including one on the Mercury missions. We saw the Faith 7 Mercury Spacecraft that actually carried Gordon Cooper on his 1963 mission. 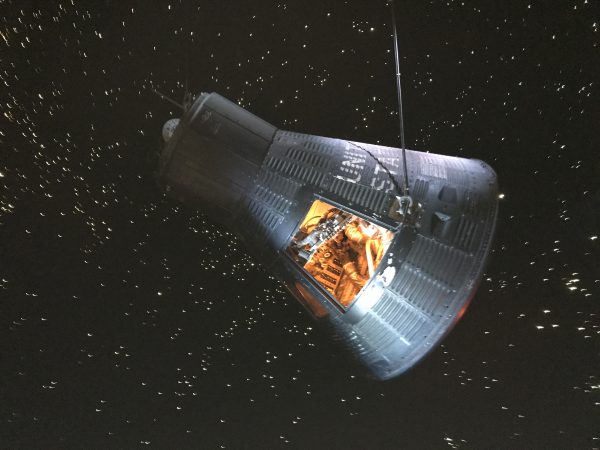 The actual Mercury space capsule flown by astronaut Gordon Cooper on May 15-16, 1963.

Next we wandered over and looked at the Apollo 17 Command Module that flew the final mission to the moon in December, 1972. This mission brought back samples of rock from the moon’s surface including one we were able to touch! 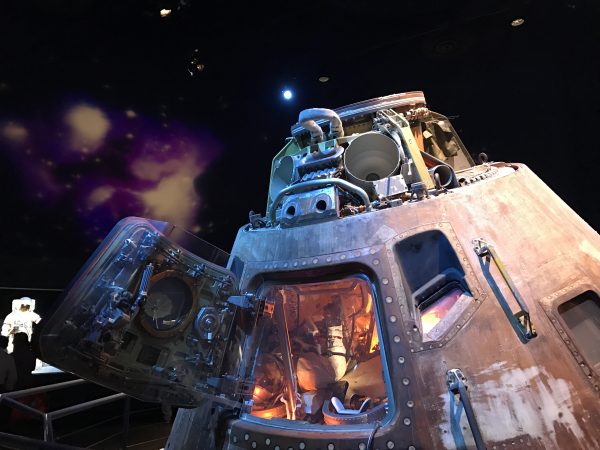 The Apollo 17 Command Module flew Dec 7-19, 1972. This last Apollo mission successfully traveled to moon and back. This capsule is named “America.” 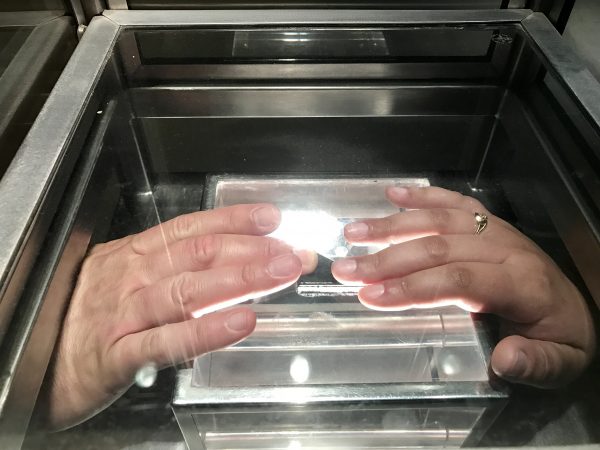 Steve and Meghan touched the moon at Space Center Houston. It’s one of the only places you can touch a rock from the moon.

By now, it was nearing time for the museum to close. We regretted that we hadn’t gotten there a little earlier, but were also glad we’d avoided so many of the crowds that would have been there during the height of the day. We resolved that we’ll just have to go back someday. The child inside me will remember that promise hold us to it.

Have you ever toured Space Center Houston? Tell us about it in the comments section below.