How we’re losing weight while traveling 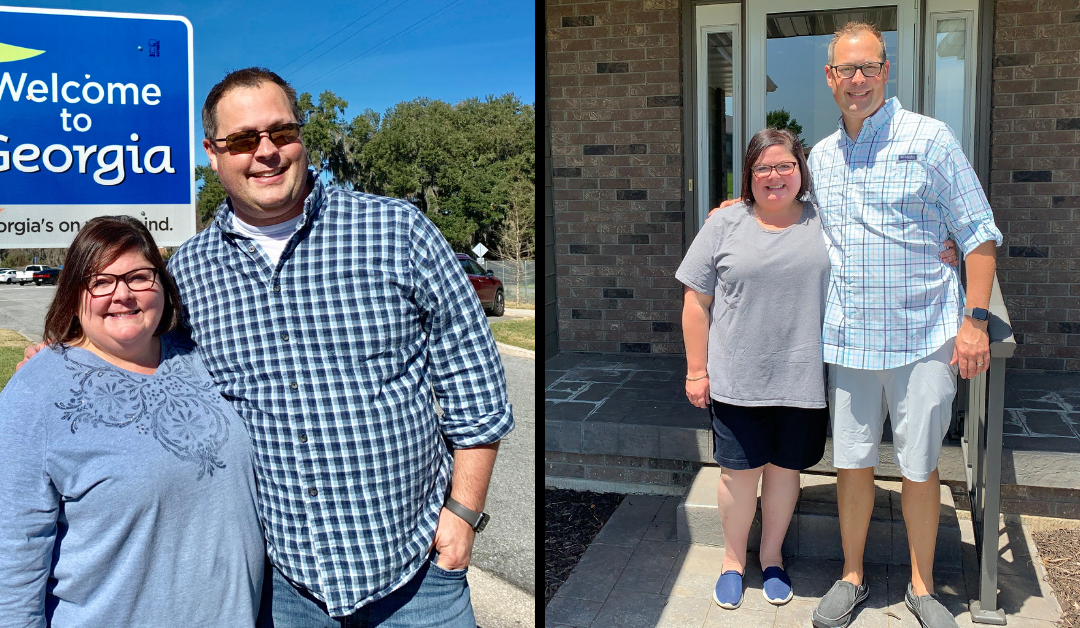 To answer your question, yes, we’re losing weight while traveling. And no worries, we still consider ourselves foodies who eat out regularly when we travel. Many of you have noticed and mentioned our weight loss recently. We haven’t said a lot about it because … well, accountability of course. If we tell you about it, we’ll surely be accountable to all of you and that is just scary. But the heck with it. Here’s the story.

Truth is, we’d both gained a considerable amount of weight. Ann’s health issues have required her to be on steroids for the past five years (which can cause weight gain) and limited her ability to exercise. Steve just likes gravy. We both have difficulty resisting dessert. No matter the cause, we’d somehow gotten more, um, fluffy than we’d have liked. Here we are at mile marker 0 in Key West this January. 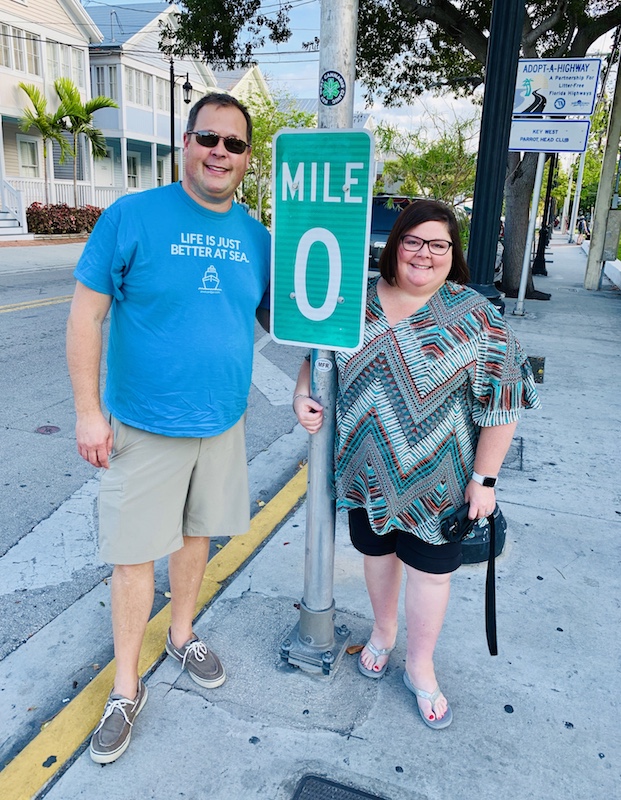 Then, in March, our daughter, Meghan, came home to visit. She told us that she was eating healthier and asked us not to cook any of her typical home-cooked favorites like Ann’s meatloaf and mashed potatoes. Of course, we wanted to support her, and decided we could suck it up and eat healthy for one weekend while she was home. 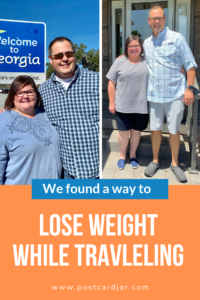 At the end of the weekend, something clicked. We kind of looked at each other and decided it was time for us to make a change as well. And so began our attempt at losing weight while traveling. To date, we’ve lost 82 pounds between the two of us. Steve is down 45 and Ann is down 37. We’re not done yet, but we’re well on our way, and we’ve developed some new habits we hope to keep for a long time.

How we are losing weight while traveling

There are a million and one different plans out there to help you lose weight. Some folks swear by the Keto diet, while others go low-carb or Paleo or use intermittent fasting. Before we got married Ann had been successful on Weight Watchers and Steve had lost weight on Jenny Craig. But our schedules and some of Ann’s health issues are different now. We knew we had to find something that would work for each of us and work while we’re traveling.

We wanted a plan that:

Honestly, we didn’t have a lot of hope we’d find anything that checked all of these boxes.

Then an ad for an app called Noom scrolled across Ann’s Facebook feed. STOP. RIGHT. HERE. We hope you’ll understand that we are NOT trying to sell you Noom or convince you it’s the greatest diet in the world. Noom does not employ us and this is not a sponsored post. In fact, we’re paying customers. We’re just sharing what’s worked for us, which you are free to take or leave.

OK, back to our story about losing weight while traveling

After we began to investigate, we saw that Noom was a little different from other programs we’d tried before. Noom was developed by psychologists, who, using lots of scientific facts about nutrition and the human brain, developed a program to teach us why we interact with food the way we do and to show us how to change our eating and exercise habits — forever.

Noom checked all six boxes for us so we began using the app at the end of March. So far, we’re loving it. The best part for us is that as long as we’re really diligent when we’re home (where we have more control over what we cook and eat) we can still eat out at fabulous restaurants and special events when we travel. 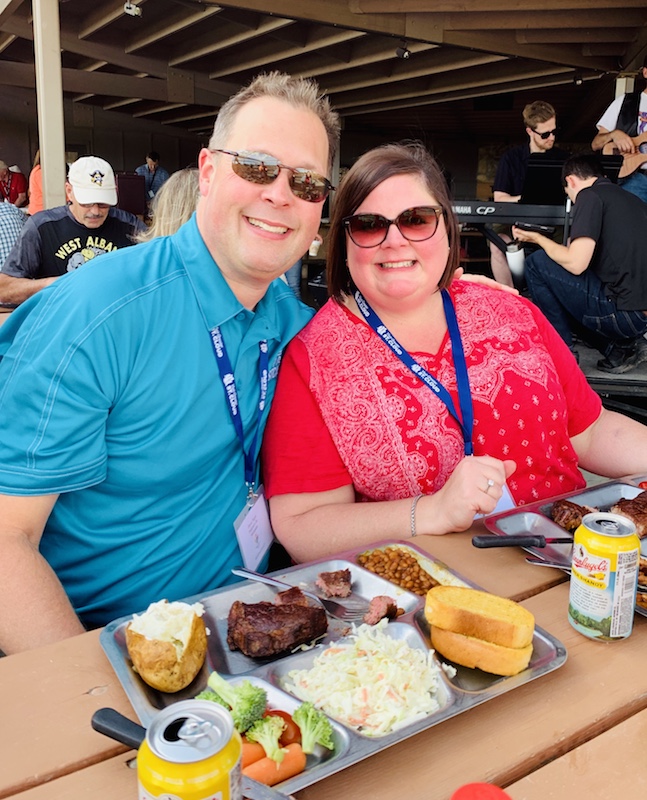 What we ate in North Dakota

On our recent sponsored trip to North Dakota, for instance, we were treated to mouth-watering meals. Restaurant managers asked us to try a giant pizza pretzel with beer cheese dipping sauce, buffalo wings, fried pickles, egg rolls, and massive cheeseburgers. 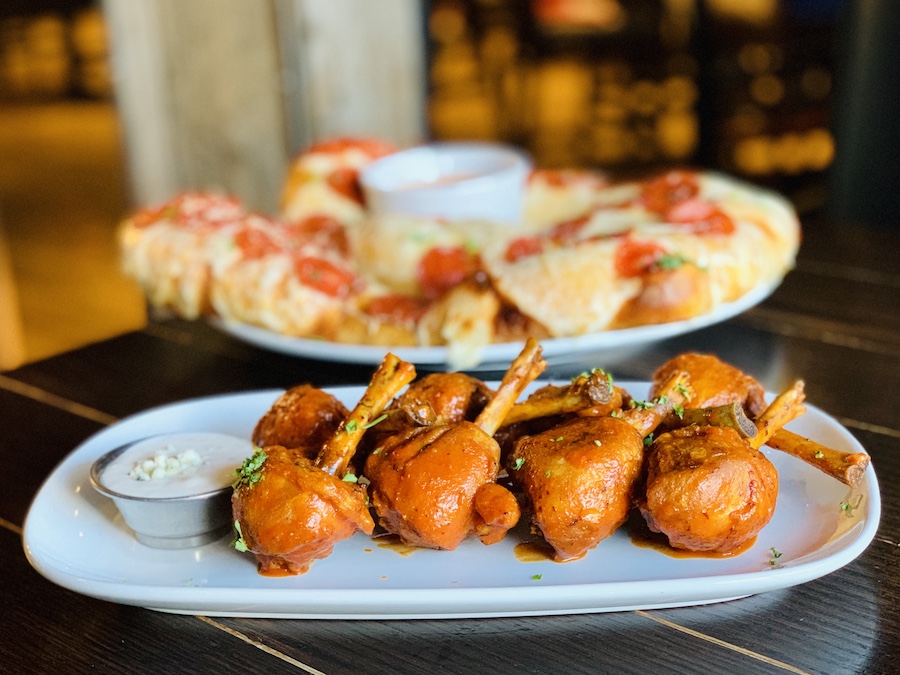 We’ve even had desserts like homemade carrot cake with cream cheese frosting and this fresh-out-of-the-oven pizookie that we feel guilty for even showing in a post about weight loss. 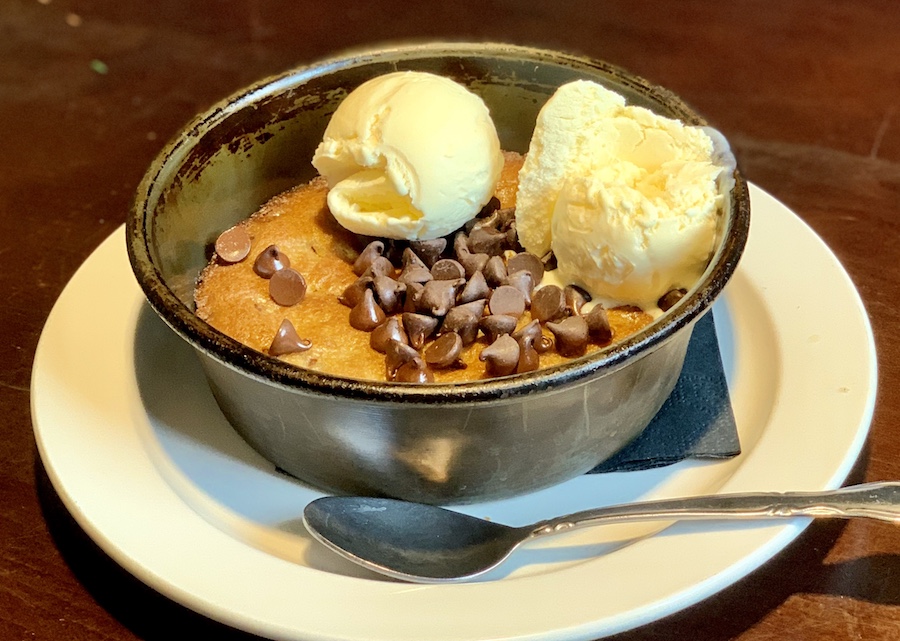 Using what we’d learned through Noom, though, we planned ahead, walked more, and ate small portions. We even took our scale and weighed ourselves each morning. Then, we also savored Every. Single. Bite. Because of careful planning and preparation, we were happy to find that we both lost weight while traveling.

Since returning home, we became even more diligent and skipped the heavy appetizers and calorie dense desserts.

A typical day’s eating at home

A typical day at home for us has about 1200-1300 calories which still leaves wiggle room for the occasional glass of wine, low-cal cocktail or other sweet treat:

We combine these foods in any way at any time of day, really. And honestly, when we’re at home, we’re probably a little under the number of calories that Noom recommends. Knowing that we’ll be above it sometimes when we’re on the road, consuming fewer calories when we’re home is what we need to do if we want to keep losing weight while we’re traveling. 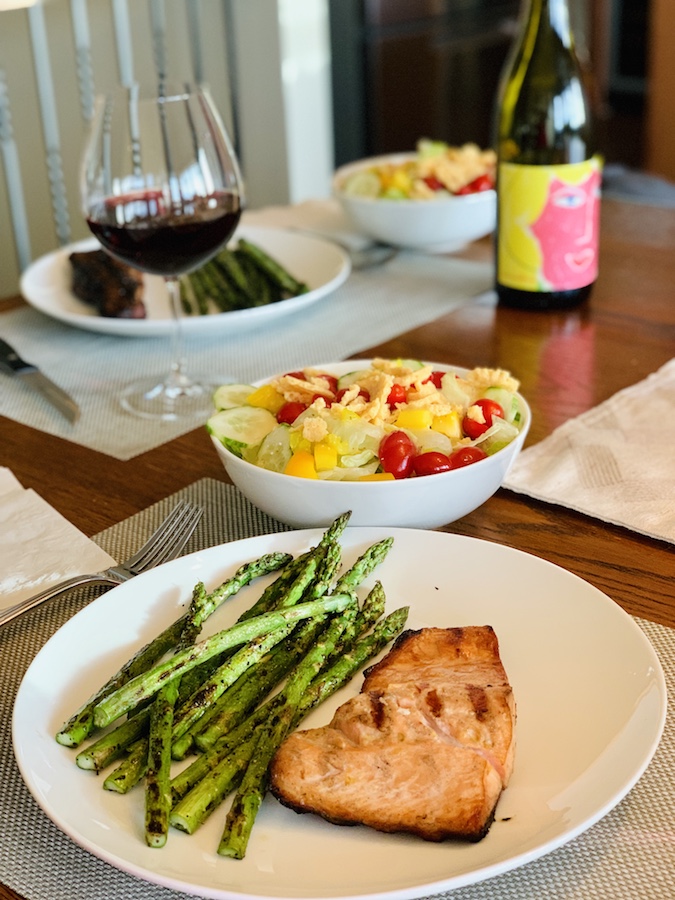 Our grocery cart now includes more fresh produce and stuff you find on all the outside walls of the grocery store (fruits, veggies, yogurt, lean meat) and less of the stuff in the middle aisles (chips, snacks, pre-packaged and processed foods). 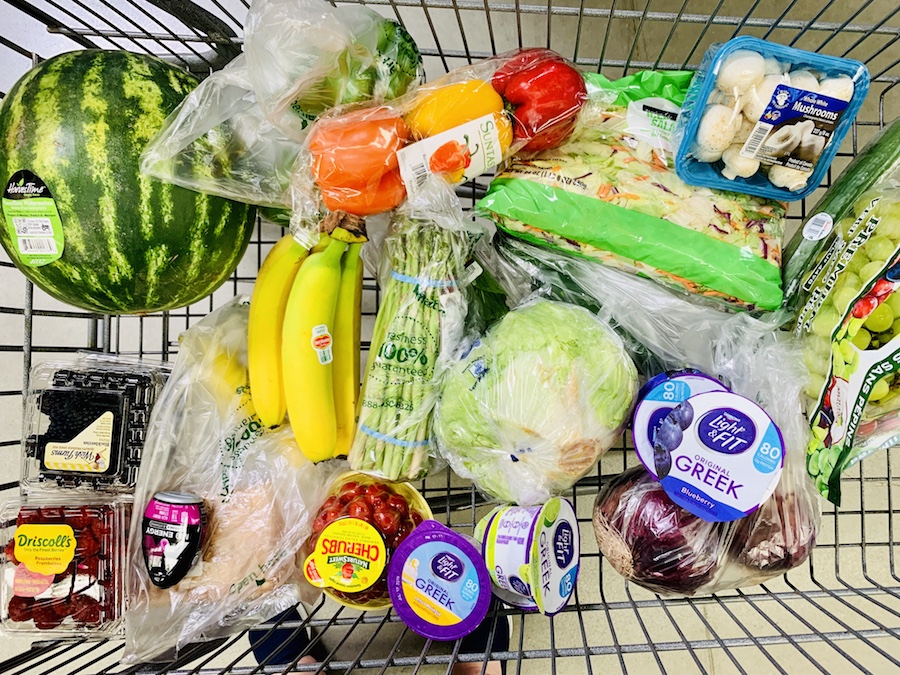 Size matters (when it comes to portions, anyway)

One big thing we’ve learned along the way is that portion size matters. We measure nearly everything before we eat. For instance, a salad is an easy place for us to put too much dressing. But when we carefully measure two tablespoons, we know we’re getting the exact number of calories we’re planning on. 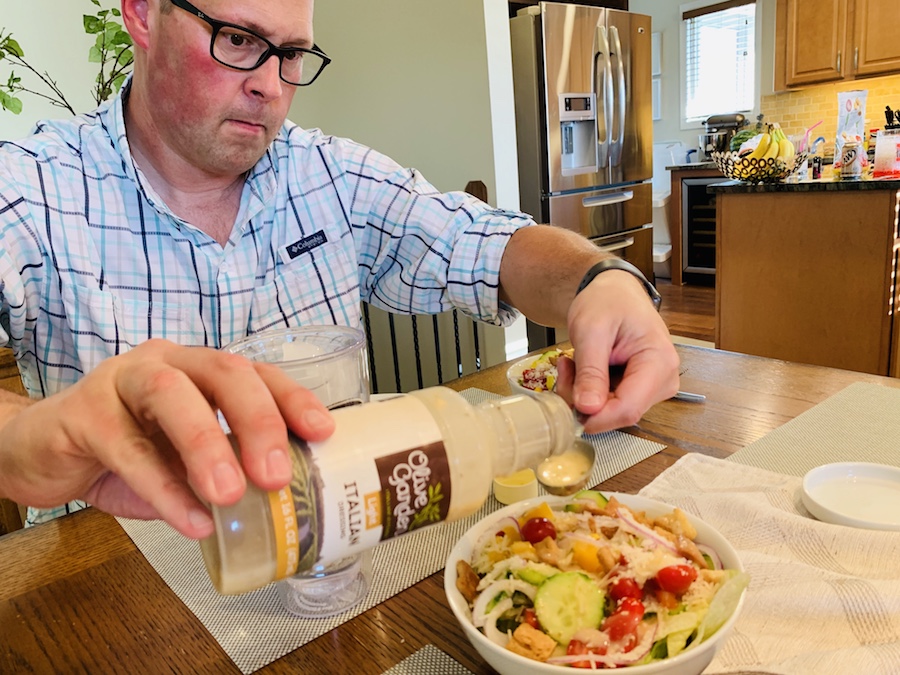 Also, we purchased a food scale so that we can know how many ounces of chicken, beef, fish, or pork we’re getting for our meal at home. And doing all that measuring pays off when we’re in a restaurant, too. After measuring out four ounces of meat enough times, we’ve gotten pretty good at eyeballing it in a restaurant. We also log everything we eat in the app.

It was fun this week to upload new security photos for an upcoming cruise and see the difference 12 weeks has made. 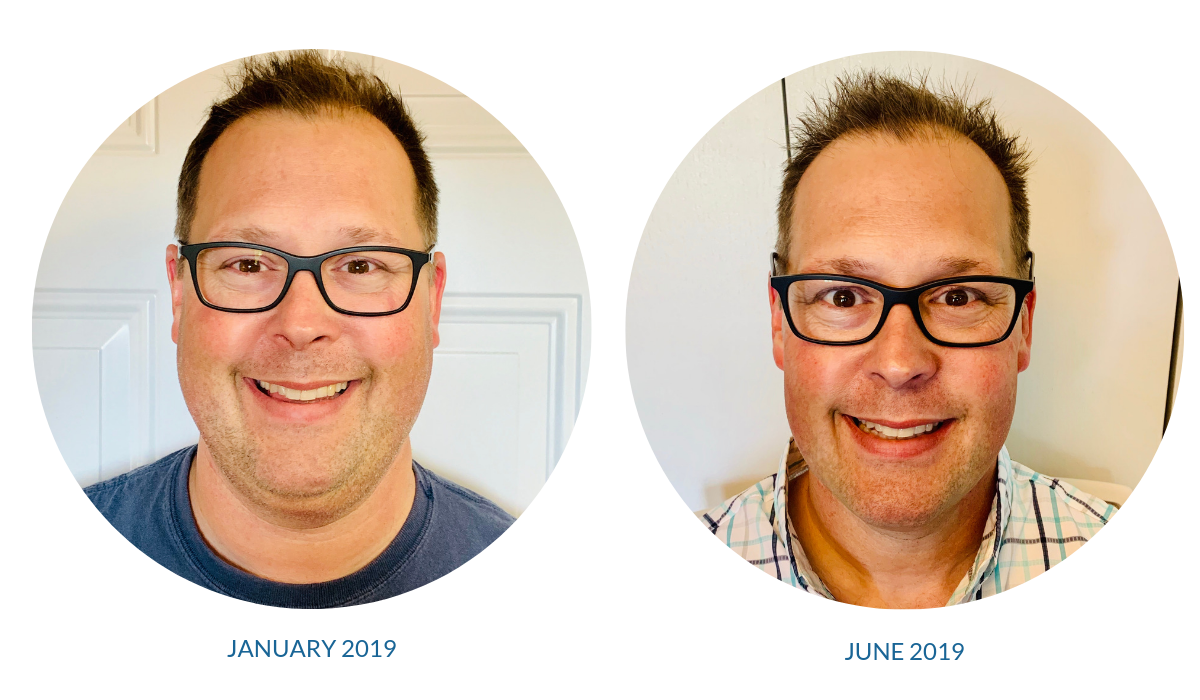 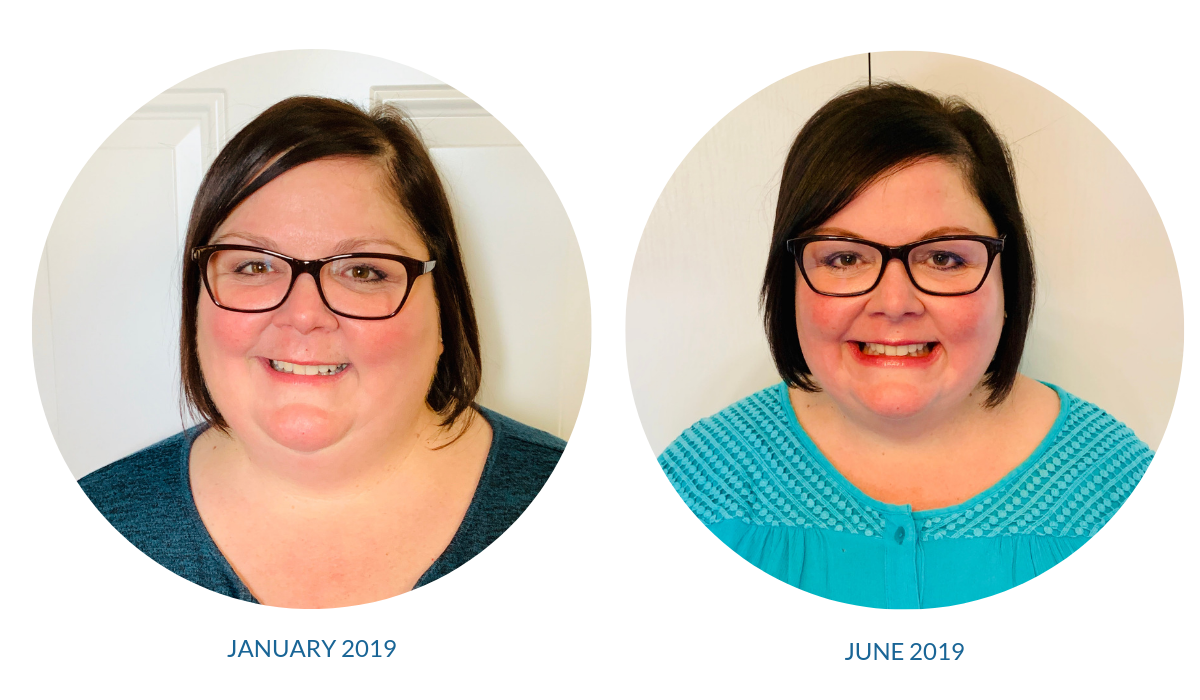 There are lots of other healthy habits we’ve picked up along the way, but we’re not going to bore you with those details here. You likely came here for travel inspiration, we know. That said, if you do have questions, you can always ask us anything in the comments below or send us a private message on one of our social media channels like Facebook or Instagram.

We’ll get back to blogging about travel, now. But since some of you had asked, we wanted you to know why you’ve been seeing less of us lately.

Note: If you are interested in trying the Noom app, you can click HERE or send us private message on any of our social media channels or email us at postcardjar@gmail.com. We’ll send you a link to a discount code for 20% off. While we are not an affiliate of Noom, like any other user who refers another person, we do receive a credit for each referral who continues past the free trial.