See where our parents have been 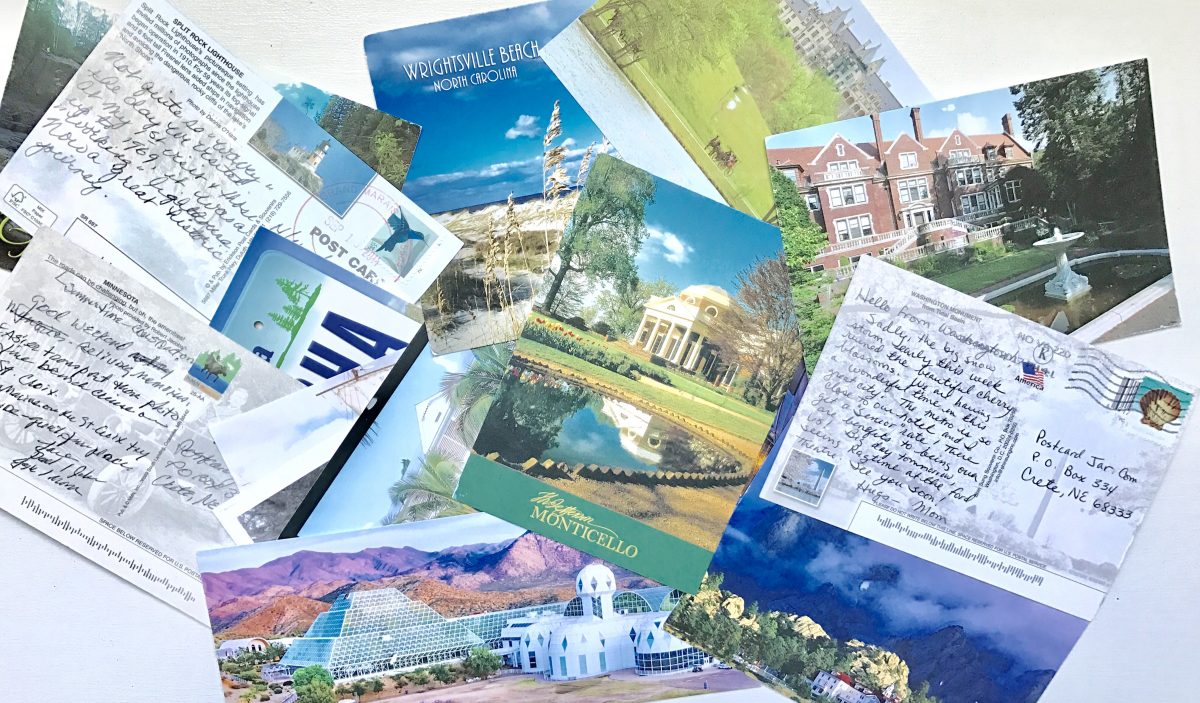 We thought we’d kick off this summer travel season with a series of blog posts featuring some of the postcards that we’ve received. We love going down to the post office, opening our P.O. box, and finding postcards from far-away places. It is so neat to think of all the places in the world our readers have visited. Occasionally, it is somewhere we’ve been. More often, we add it to the growing list of places we’d like to go. In any event, it’s our hope that you’ll see something in this series that sparks your interest and makes you want to set off on an adventure of your own. 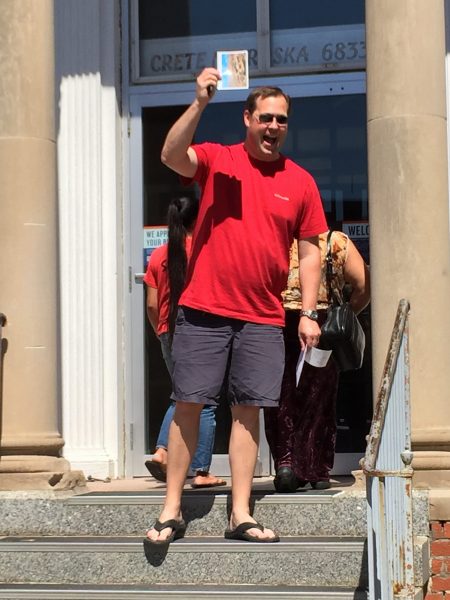 We love getting postcards from our Postcard Jar followers.

We decided that it would be best to start our “postcard parade” with postcards sent to us by our greatest fans (don’t laugh) — our parents. They’ve been sending us postcards since the beginning of our blog, and we couldn’t appreciate it more.

My mom and dad have taken a few trips over the past few years. A couple of summers ago, they headed to northern Minnesota. There they made stops in Duluth, Gooseberry Falls State Park, and at Split Rock Lighthouse on the northern shore of Lake Superior. 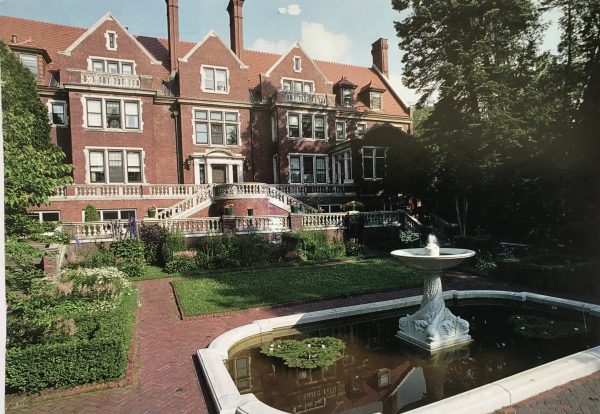 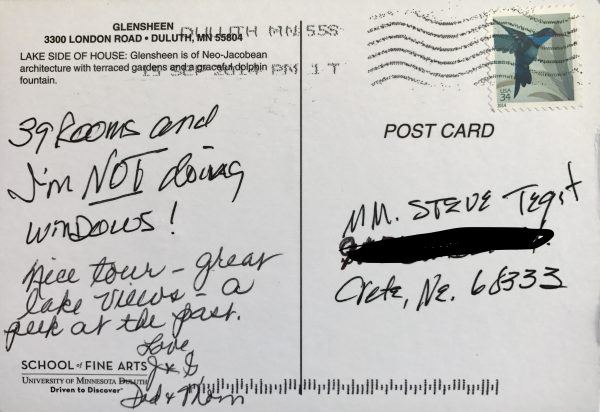 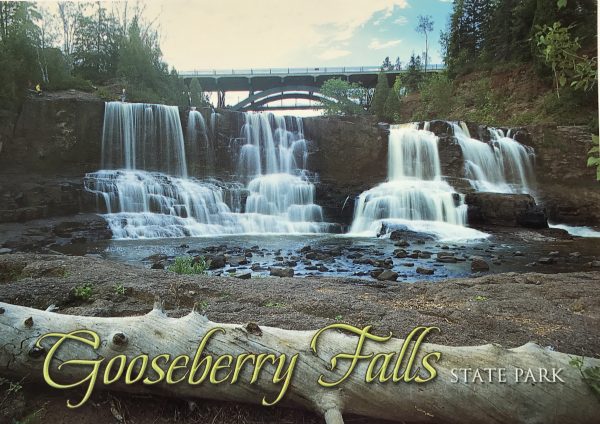 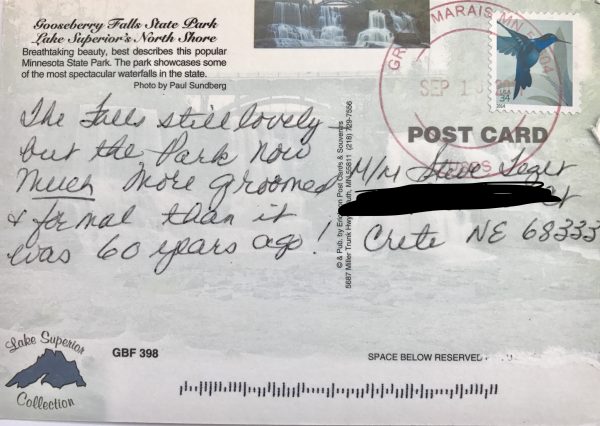 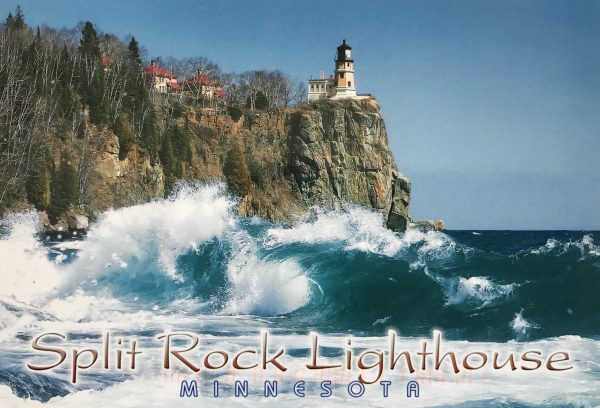 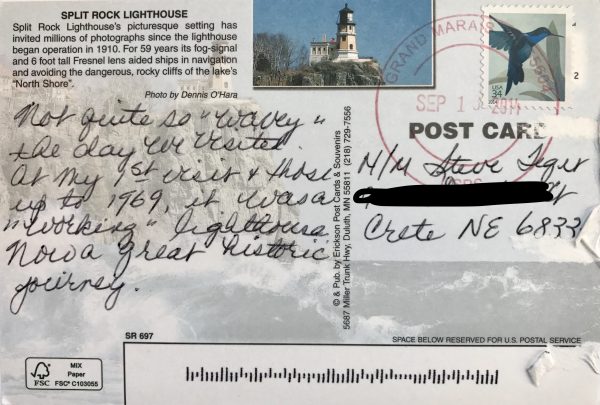 A different trip to Minnesota took them to Stillwater and they sent a postcard not of that quaint town, but a fun one about traveling in the state (complete with a “Minnesota rest area” photo on the back of the postcard.) 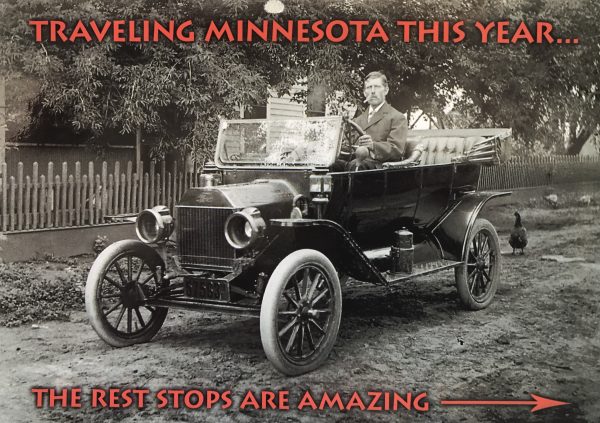 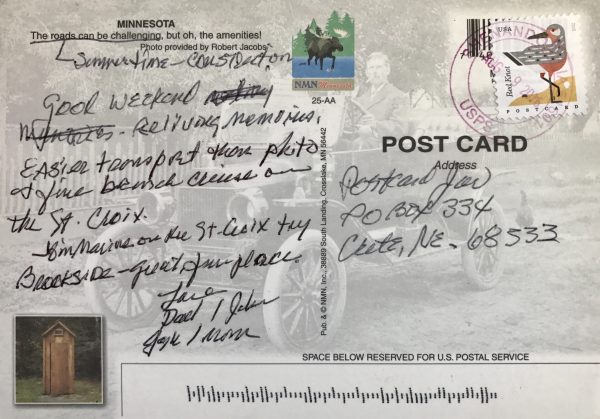 My folks have gone other places, as well, including a stop at the Lewis and Clark Visitors’ Center in Nebraska City, Neb. 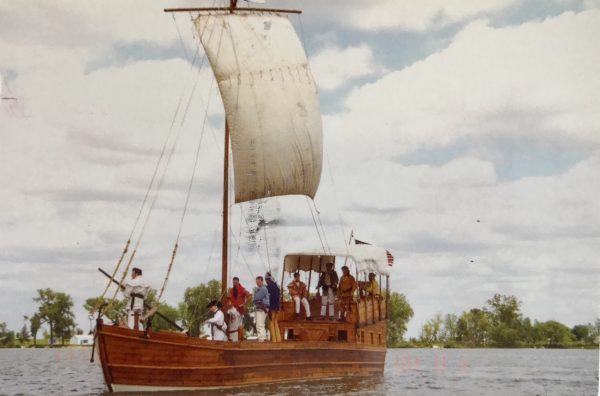 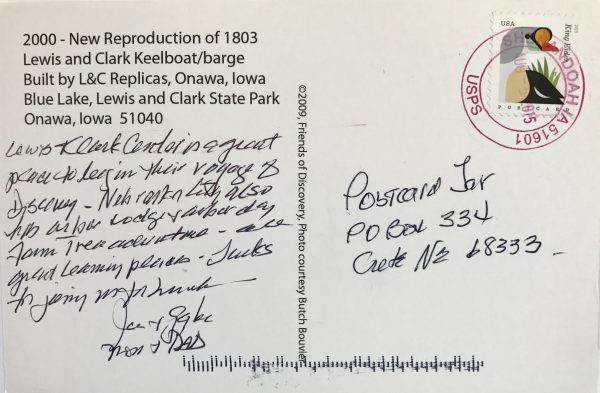 Finally, they took a trip across southern Florida this winter, and came across a gallery of work by environmental photographer Clyde Butcher. They absolutely loved it and said it was on the Tamiami Trail and was located in a cypress swamp. 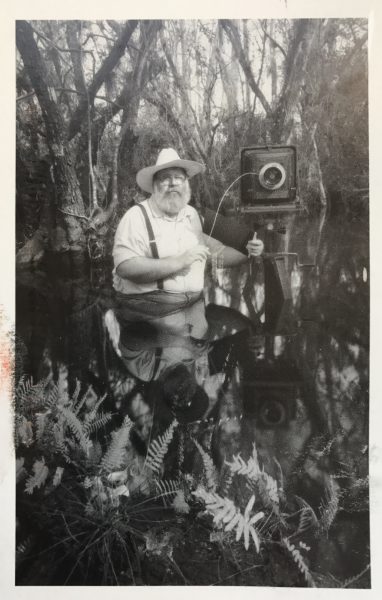 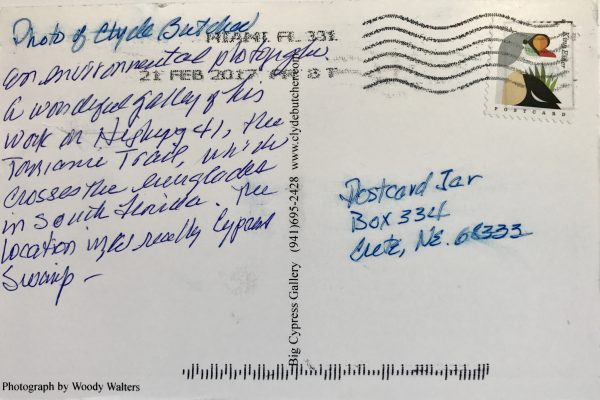 Ann’s mom, Carol, has done quite a bit of travel, as well. She has made a couple of trips to see her brother, who lives in North Carolina. When she goes, they typically explore the region. With her brother, Carol has been to Washington D.C. where she saw the cherry blossoms, and to Thomas Jefferson’s home, Monticello. 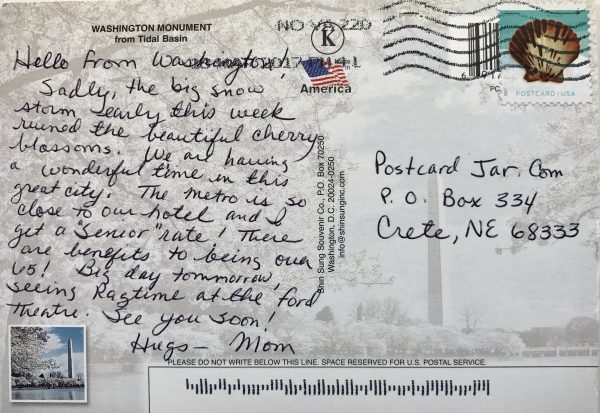 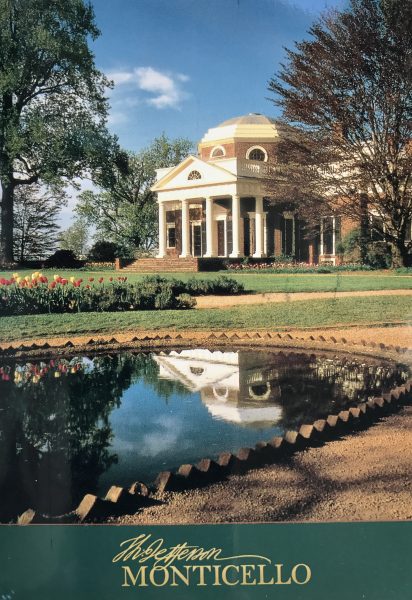 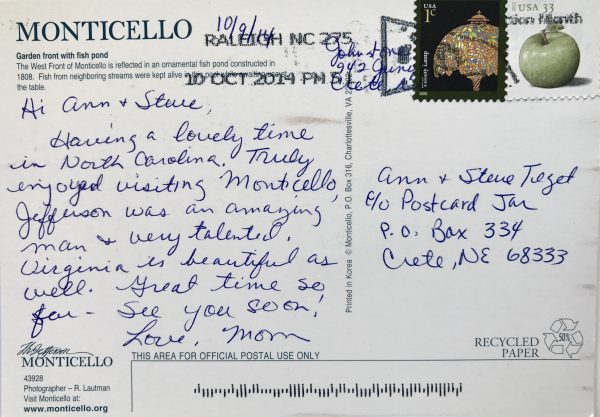 They have also visited George W. Vanderbilt’s Biltmore estate, a not-so-modest 250-room “French Renaissance-style chateau,” which Carol said was beautiful. Finally, they have also visited some of the beaches that make the Eastern Seaboard such a wonderful place to visit. 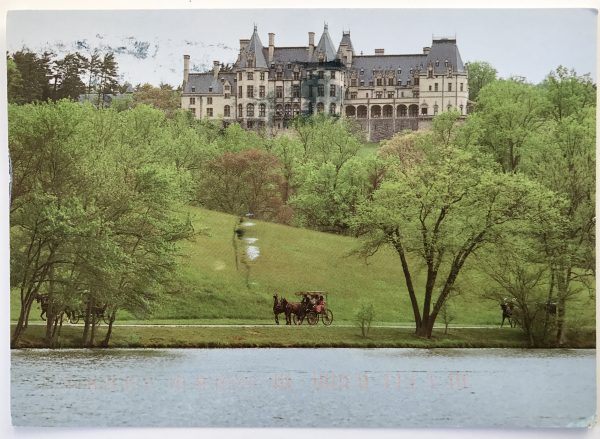 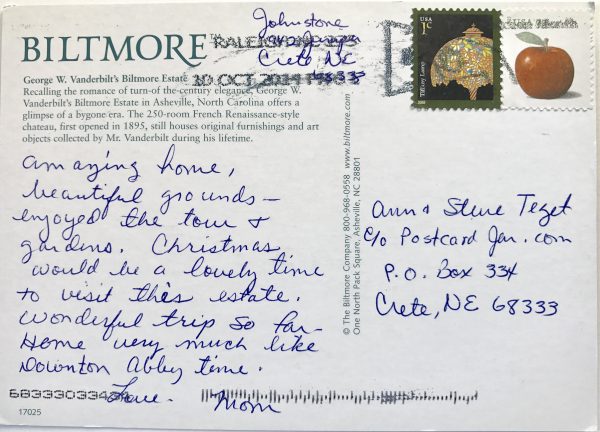 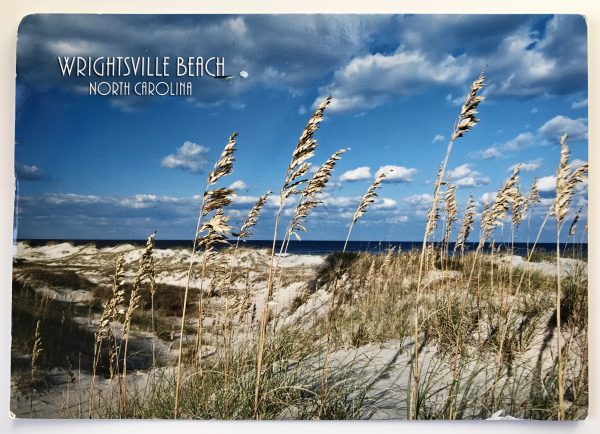 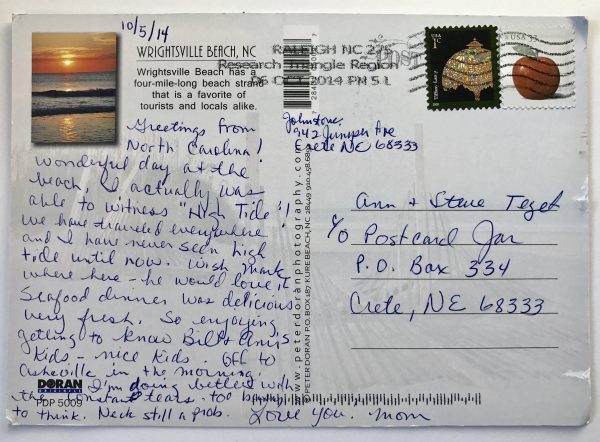 Carol and her late husband, Mark, had a cottage on Hamlin Lake near Ludington, Mich. As a result, Carol has made many trips over the years across Iowa and Illinois on their way to Michigan. On a more recent trip with one of her daughters, Carol realized that just steps from where she and Mark had gotten gas for years in Leclaire, Iowa, was the store from the show, “American Pickers.” They stepped in, met one of the show’s stars, and had a wonderful time. 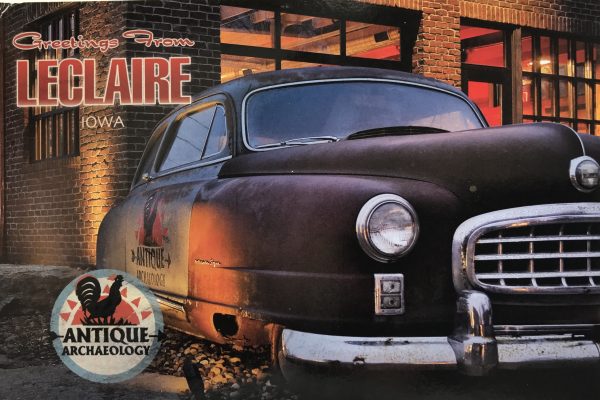 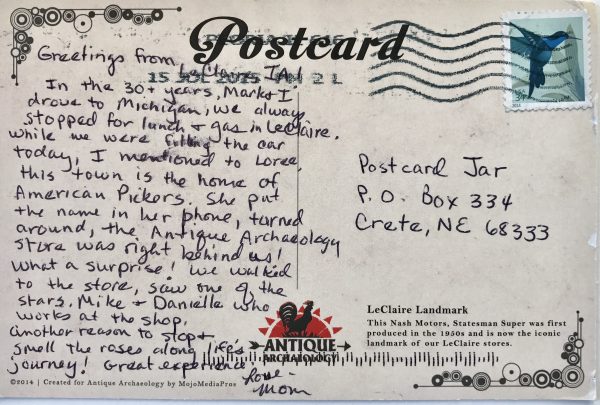 Carol pointed out that it was just one more, “reason to stop and smell the roses along life’s journey.” Of course no trip to Ludington, Mich. would be complete without a visit to the city’s iconic lighthouse to watch the S.S. Badger head out for its crossing of Lake Michigan. 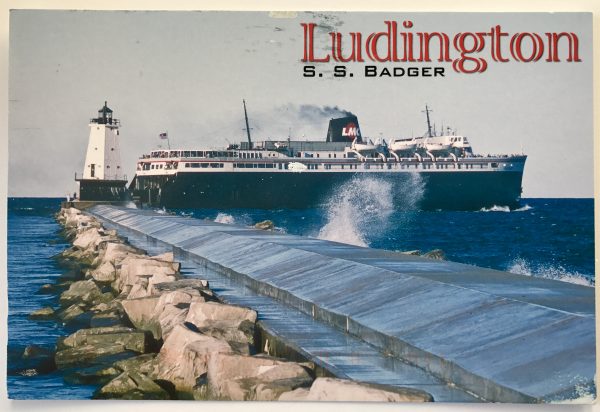 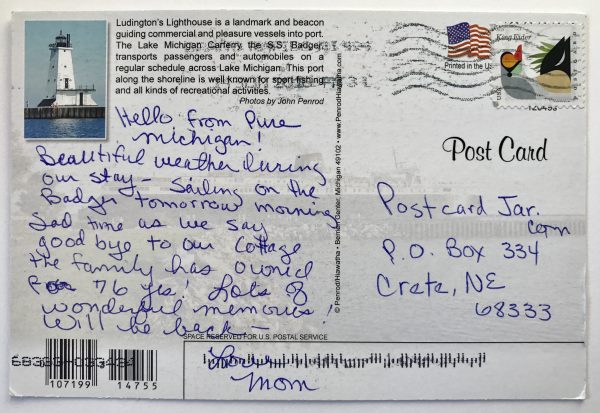 Finally, Carol’s travels have taken her to see friends in far-off places. She’s visited Estes Park, Colo., where she stopped in at the Stanley Hotel. One night spent in the Stanley was all it took for Stephen King to come up with the story of The Shining. 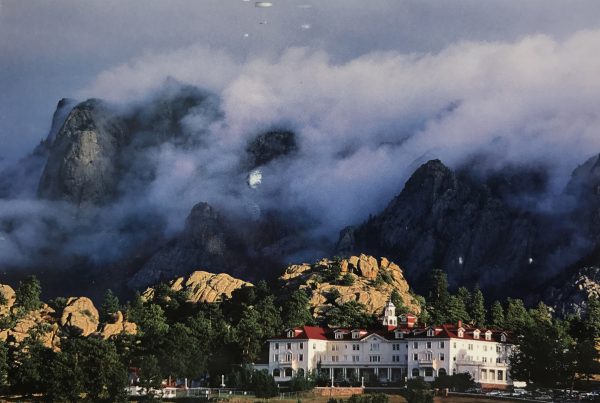 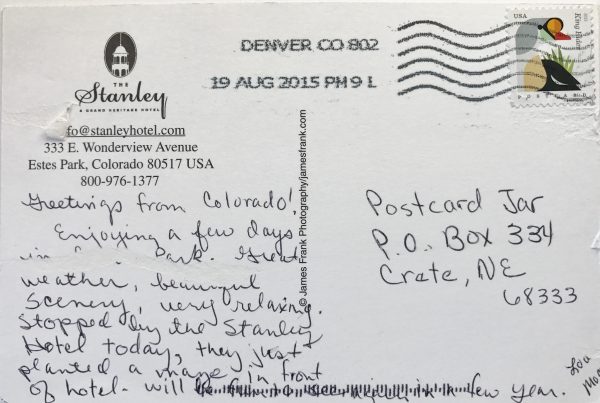 Carol has also visited some friends who have a home in Arizona. There she visited the Biosphere 2, where eight people lived for two years eating only what they grew while inside.

Finally, Carol also visited my parents in the Florida Keys, where she made a stop in Key West. Among other things, she toured the “Little White House,” where President Truman would go for vacation. 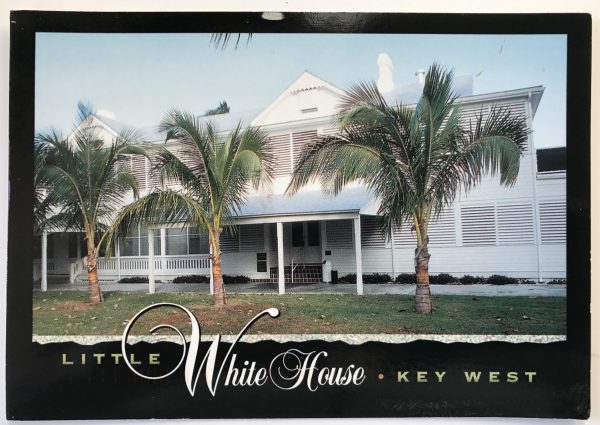 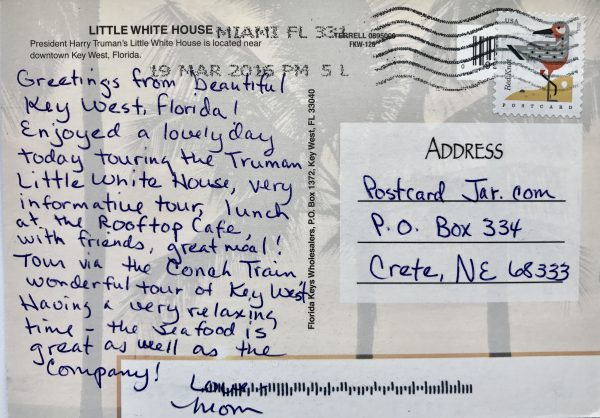 Looking back at all these postcards, we’re really proud of our parents for their willingness to set off into the unknown and do a little exploring. In fact, it sort of answers the question as to where we got the travel bug. Over the next few weeks, we’ll be sharing more postcards sent in by our readers. We hope that they inspire your imagination and give you some new ideas on where you can go next!

Have you been to any of these places? Let us know in the comments section below. We’d love to hear from you. And if you do take a trip, please don’t forget to send us a postcard at Postcard Jar, P.O. Box 334, Crete, NE 68333.