Thanks, Paul and Connor! 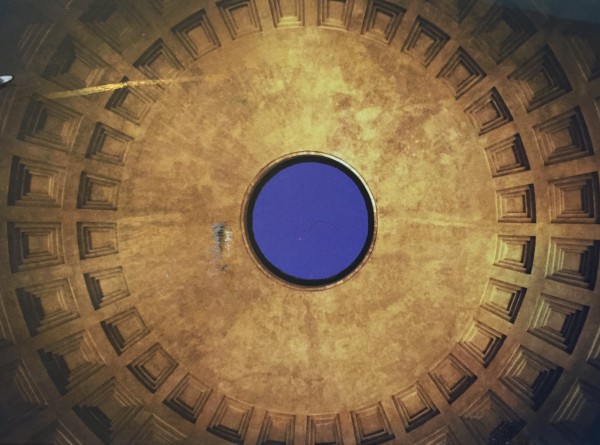 Last summer, my brother and nephew took a father/son trip to Italy and did lots of sightseeing, exploring, and even took an Italian cooking class. 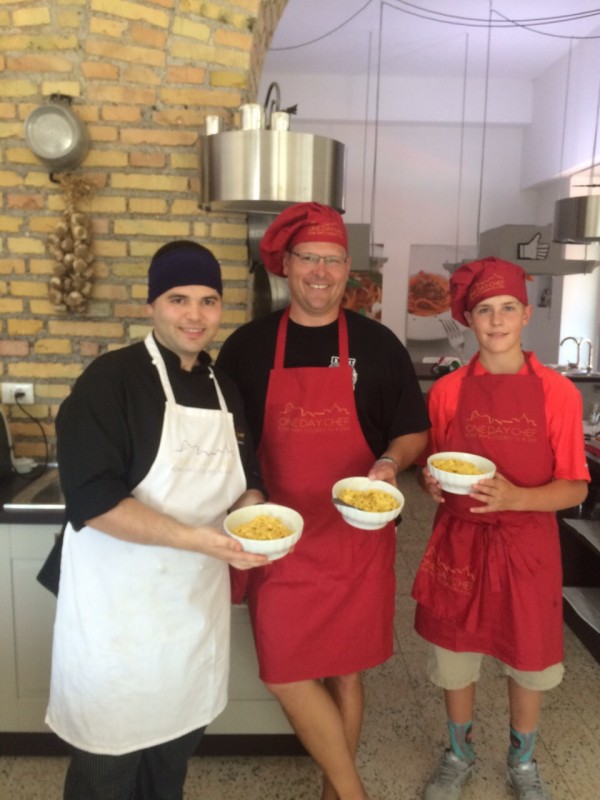 Paul (center) and his son Connor (right) enjoyed learning how to make fresh pasta and sauces from experts in Italy.

While their schedules were busy, we really appreciated them taking time out to find postcards to send to us, even when it meant several unexpected stops or delays to find a stamp and mailbox. It was so fun to hear from them as they explored new places together and see Europe through the eyes of a 14-year-old boy.

In Rome, they took a Vespa tour of the city and toured Castle Sant Angelo (Emperor Hadrian’s mausoleum) along with the Vatican museums. 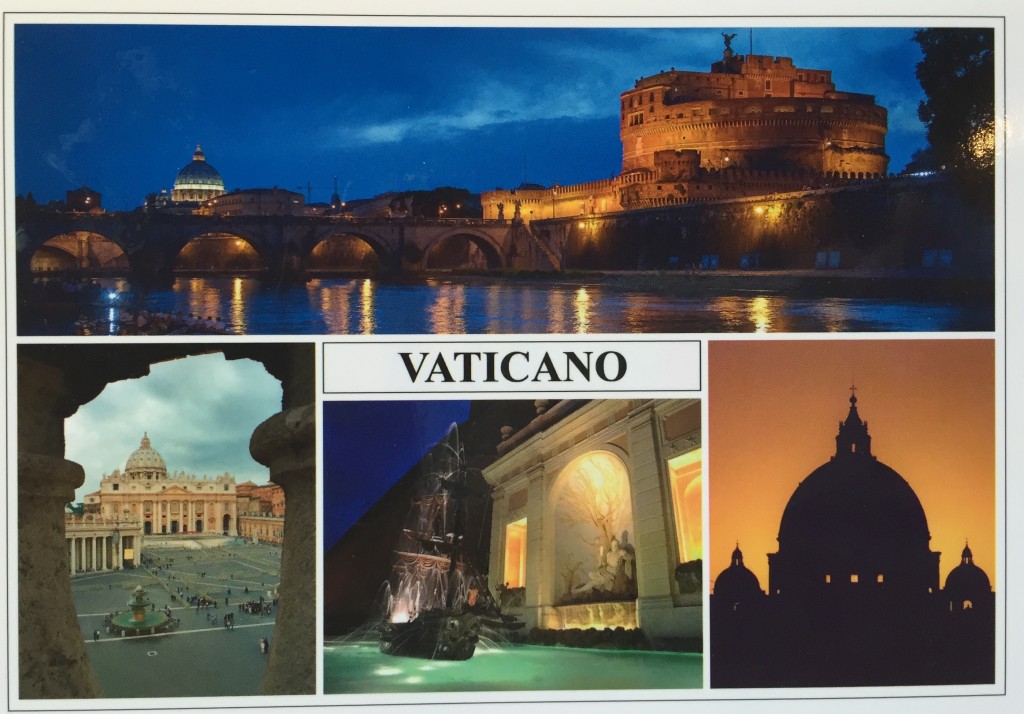 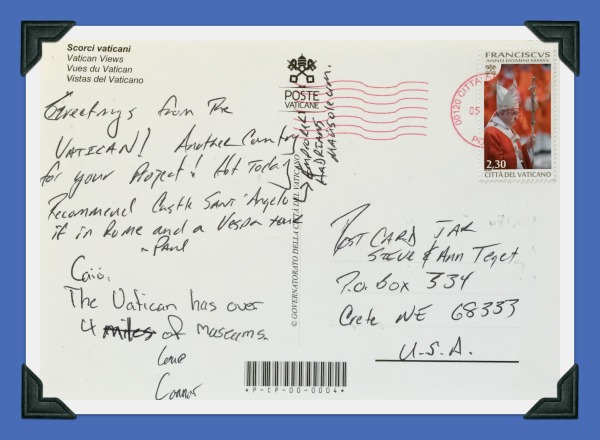 Connor pointed out that the Vatican has over four MILES of museums! Another favorite of theirs from Rome was the Pantheon, a truly remarkable structure [read more about Rome and the Pantheon here]. 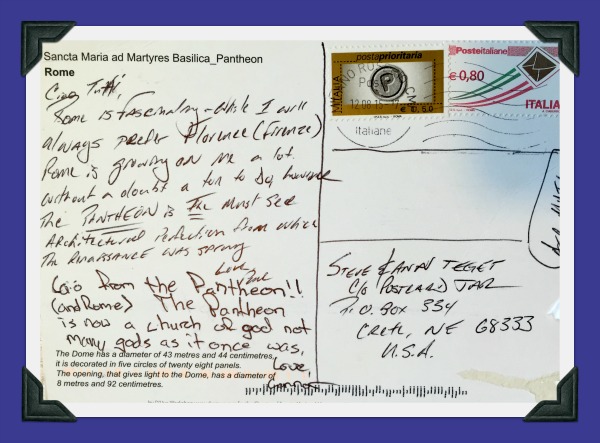 Another stop on their trip was in my brother’s favorite Italian City, Florence. Paul spent a semester studying art history there, and has told many tales of the city’s wonders. Connor told us that if we ever go to Florence we must see the Pitti Palace. 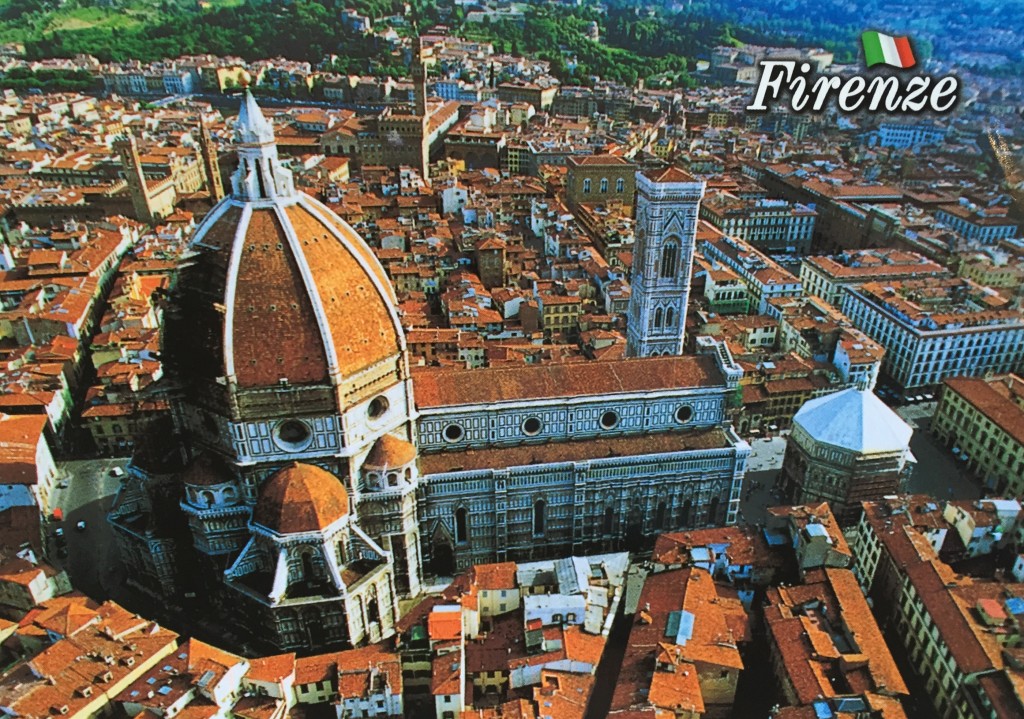 Paul’s list of must-sees is a little more complete (as you’d expect from someone who spent a semester there), and includes The David, Santa Croce, Santa Maria Novella, and The Uffizi Gallery. Finally, Paul said a highlight of this trip was getting to walk on the Vasari Corridor. 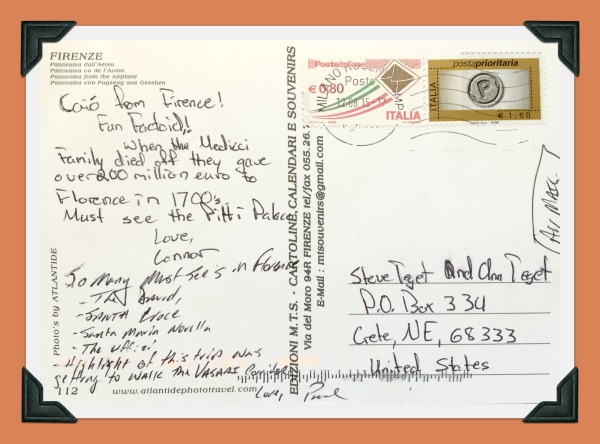 On their trip, they also visited Venice. Looking at the gondolas pictured on the postcard one can imagine gliding down the canals of the city in the evening, perhaps returning to a hotel after a dinner out.

Paul pointed out the Venice has 120 churches because the city is made up of 120 islands, and each has its own church. Paul and Connor also shared some things to see in Venice, which include the Doge’s Palace, St. Mark’s Cathedral, and the Tintoretto’s. 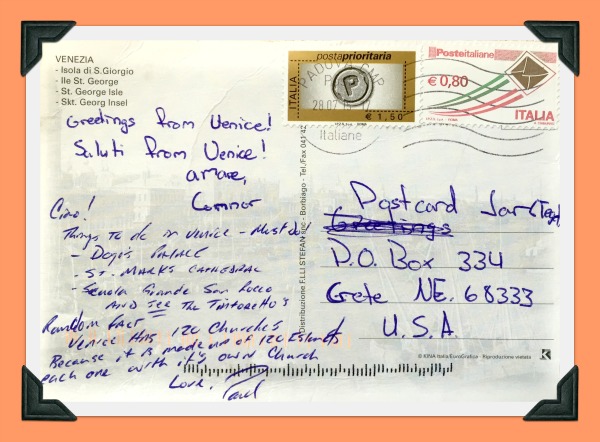 Paul and Connor returned to the U.S. raving about their trip and all they saw and did. Clearly Italy has a lot to offer and we look forward to getting back there again someday.