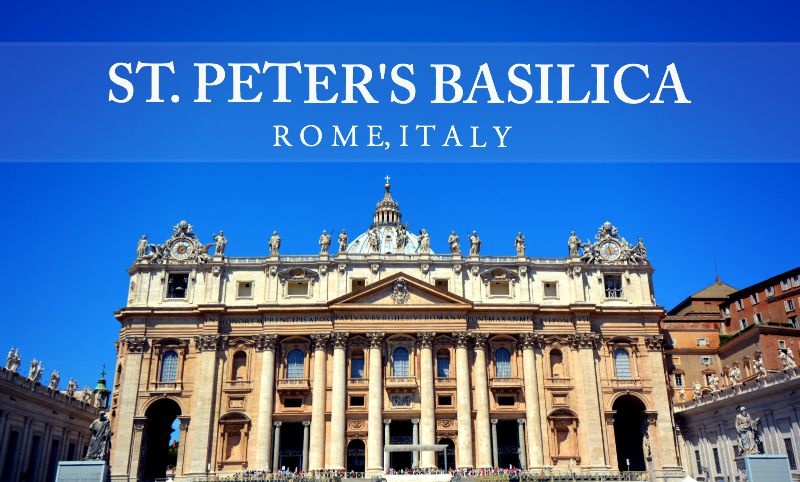 I’d looked forward to this day since we’d booked our European vacation. I’d been to Rome twenty years ago, so had been to the Vatican, but Ann had not. I’d told her that St. Peter’s was something we could not miss on our visit to the Eternal City. I’d been counting down the days until I could take her into the basilica and see her reaction.

We took a cab from our hotel, winding through the streets of Rome until we came around a corner onto a wide street and the windshield of the cab was filled with a magnificent view of St. Peter’s. It is an amazing structure, its mammoth size combining with its near perfect proportions to play tricks on your mind.  At first, it looks like a fairly normal building until you stop and realize just how tiny the people in front of it seem. When you process that information, you realize just how gigantic the basilica truly is. 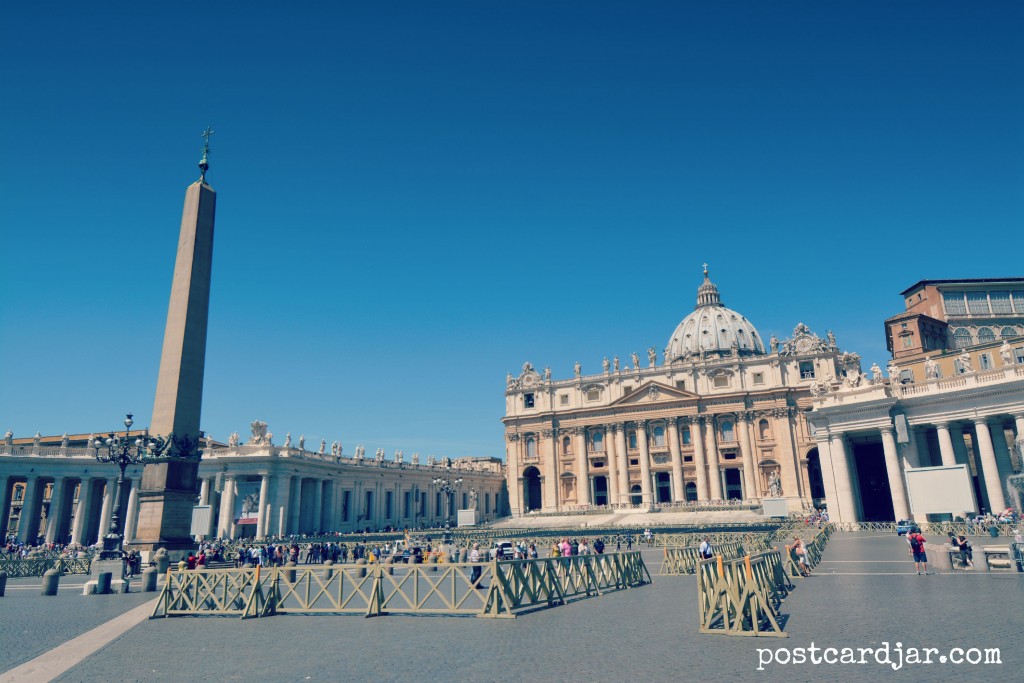 Our cab stopped in front of the square, and we got out, pausing a moment to take in the grandeur. We started crossing the street, approaching the square, reverently taking it all in. At least that’s what we planned to do.  Suddenly we were descended upon by a multitude of vendors selling selfie sticks, scarves emblazoned with the word, “ROMA” and tickets to the Vatican Museum which we knew was sold out for the day. We refused all of these oft-repeated, wonderful offers (seriously, Rome street vendors, if you just saw me tell someone I didn’t want the cheap selfie stick they are selling, why would you think I’d want to buy one just like it from you?)  as we crossed the street and headed into the square.

Once in the square, I headed to the end of the line to go in while Ann meandered around, snapping some photos for this very post.

[pullquote align=[“right”] Suddenly we were descended upon by a multitude of vendors selling selfie sticks, scarves emblazoned with the word, “ROMA” and tickets to the Vatican Museum which we knew was sold out for the day. [/pullquote]

Behind me in line was a British couple. They were in Rome for a week, and we chatted as we waited, baking in the Roman sun, taking turns telling sales people that we didn’t want their tickets or selfie sticks or “ROMA” scarves, and politely directing people to the end of the line when they tried to cut. We also spent some time admiring the umbrellas that others had brought along with them to block the sun, and wising we’d been that smart and that the vendors would be selling those, instead.

The line moved quickly; within about 25 minutes, we were passing through the metal detectors and x-ray machines. From there, we walked toward the basilica, and were directed under a pop-up tent where two people stood examining the dress of all visitors. They reminded some that this was a place of worship, and that shoulders and knees had to be covered by clothing in order to enter. As we looked around, we realized that there were quite a few embarrassed women sporting “ROMA” scarves turned into makeshift blouses and skirts.

As we passed through the doors, I watched Ann’s face light up as she stood taking in the beauty and grandeur of the building. 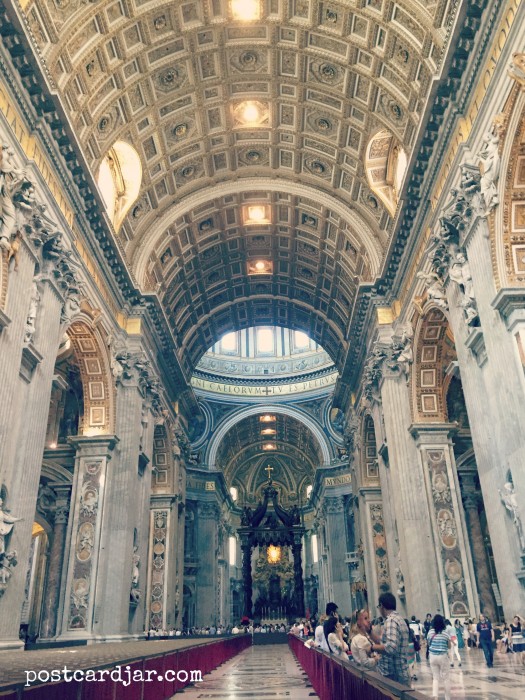 A smile spread across her face, and I knew that she agreed this was the “must see” I’d told her it was. The first look inside this church is truly awe inspiring. It is absolutely huge, though it doesn’t seem that way until you again look at the people in it for scale. Thousands visit daily, but it simply doesn’t feel crowded. 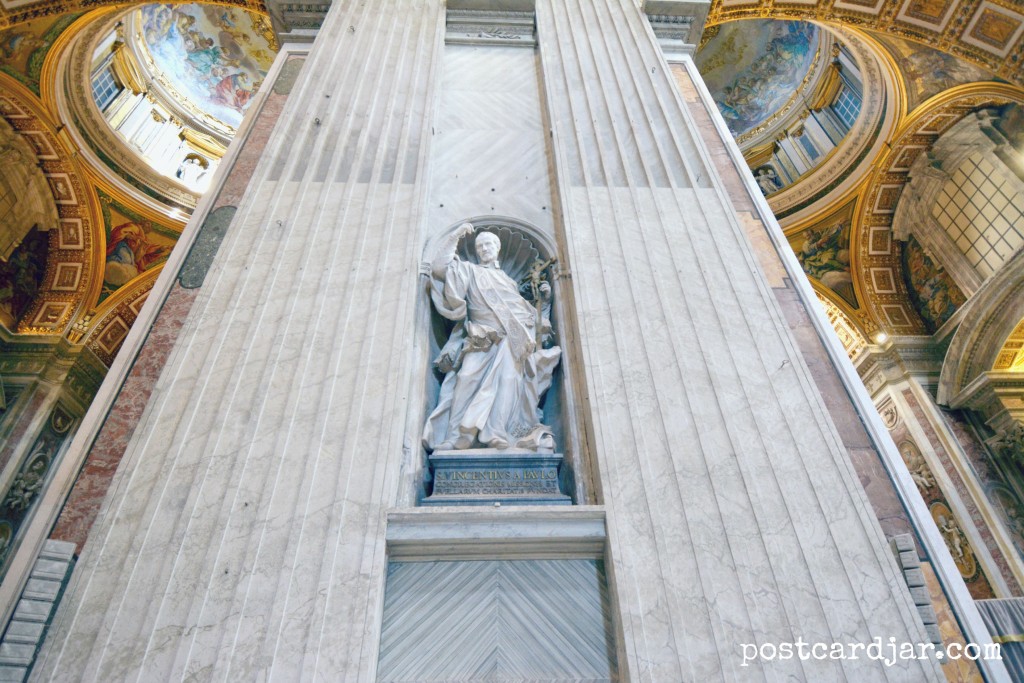 Just inside the door and to the right is Michelangelo’s Pieta, and we headed off in that 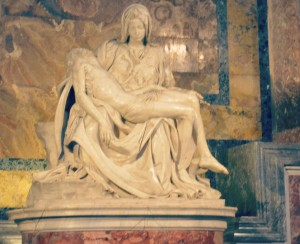 The marble sculpture, The Pieta’, dates back to 1499 and was assigned to a then 23-year-old Michelangelo Buonarroti.

direction to take a closer look which was difficult to do because of the number of tourists standing around it, holding their “ROMA” skirts with one hand, and snapping photos with the other, cameras held high over their heads on selfie sticks, hoping that one of their many photos might turn out.

Though not the case in many churches and museums, flash photography is permitted in St. Peters. I thought I remembered from my visit 20 years earlier it was because the art is mosaic. At first I thought I’d remembered wrong, that I was looking at paintings. Only after leaning in for a closer look did I see the thousands of tiny tiles that make up the massive mosaics. 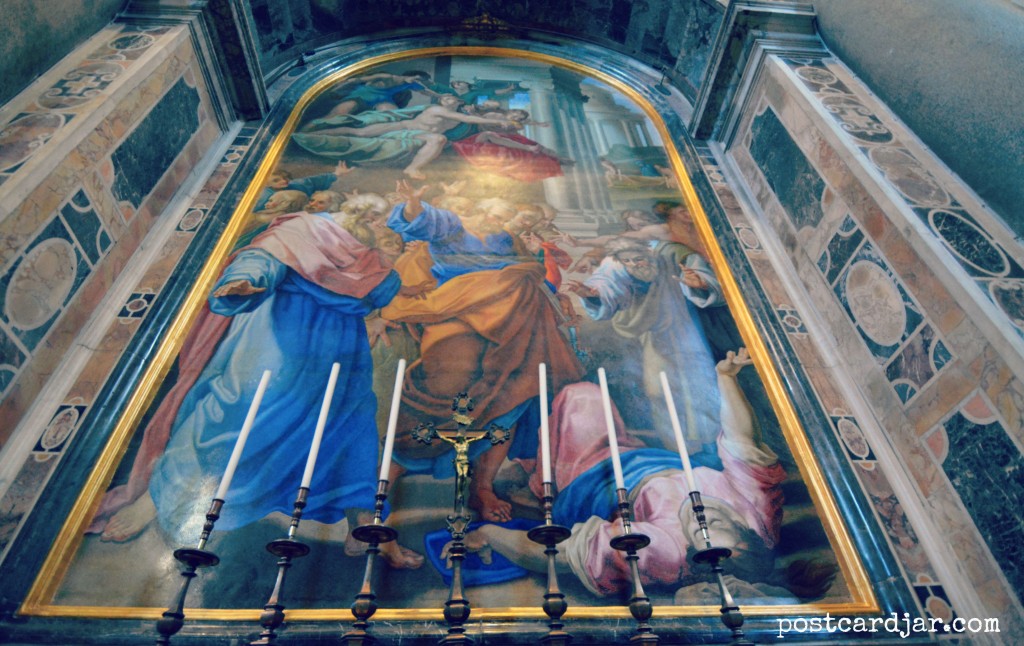 One of many incredible mosaics in the basilica. 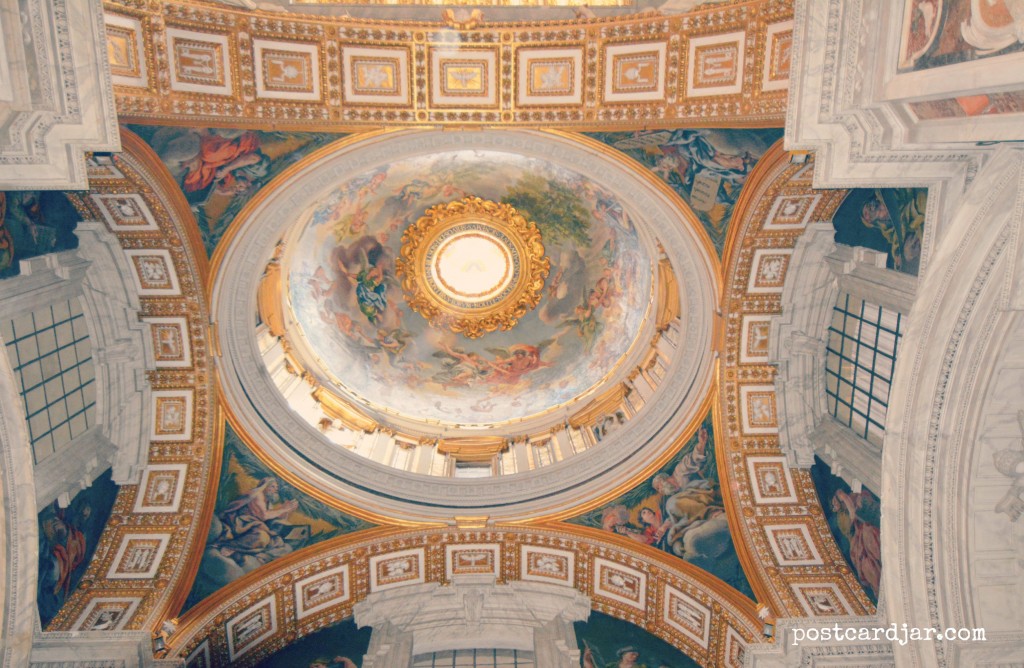 We spent an hour wandering through the basilica, marveling at the architecture, the altar, and the number of people who would stand in one place for minutes, surrounded by some of the most beautiful creations of mankind, trying to figure out how to fix their recently acquired selfie sticks. 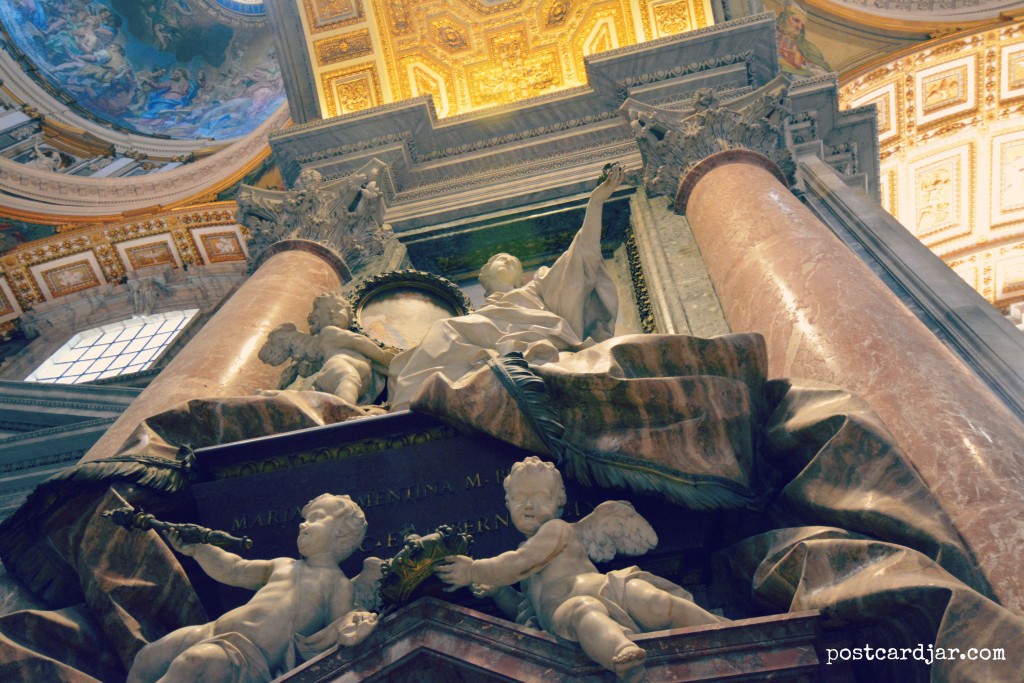 After we’d thoroughly explored the basilica, we headed back across the square.  We reminisced about the beauty we’d seen as we navigated the throng of street vendors  so we could find a cab to take us to the next place on our “must see” list, a historical place we’d only briefly seen on our car tour the day before:  The Roman Colosseum.

[well]This blog post is part of a series about the “20 Things We’ll Remember Most About Our Summer Vacation.” Up next: The Roman Forum and Colosseum. [/well]