6 of the best crostini recipes you’ll ever make 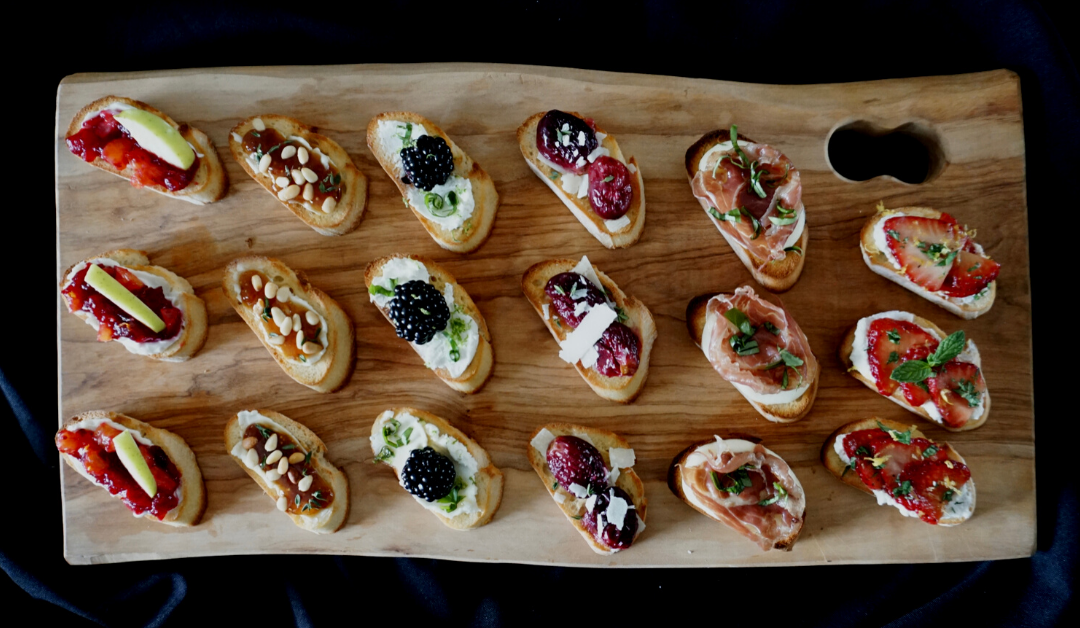 We’re sharing six of the best crostini recipes we’ve ever made and you can easily make them, too! Homemade crostini are the perfect bite-sized appetizer for gatherings. But portions can also easily be sized down for just one or two people, like us.  Made with half-inch slices of toasted baguette, crostini toppings can be sweet or savory.

How to make crostini

Crostini, (pronounced kroh-steen-nee), is a thin slice of French baguette bread that is typically brushed with olive oil before being toasted in the oven. It’s super easy to make. Just follow the steps below:

1: Preheat the oven to 375°F
2: Slice a baguette into 1/2″ slices and arrange on a baking sheet
3: Brush baguette slices with olive oil
4: Bake for 8-10 minutes, until golden brown

You can also save a little time by toasting crostini in an air fryer. Just be sure to keep an eye on it, as it can easily burn. 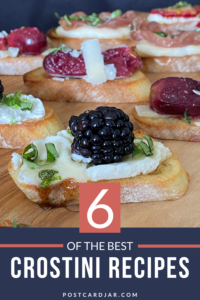 A few of the best crostini recipes we’ve tried

We recently blogged about pulling together a Valentine’s Day celebration [HERE] with items purchased at our area grocery store, including a pre-made dinner for two. Since our Valentine’s Day dinner was mostly done, we decided to spend our time experimenting with some new crostini recipes. We enjoyed pouring a glass of wine and spending some time together in the kitchen. 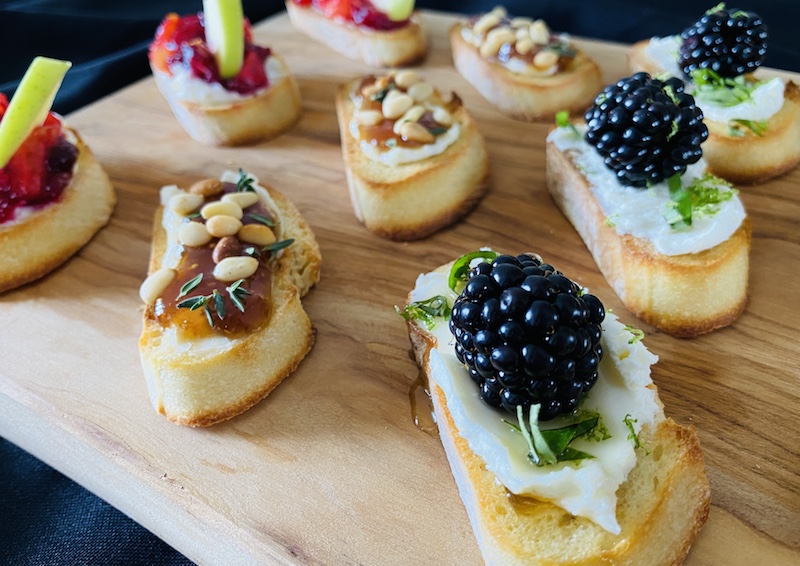 There we put together and sampled some of the best crostini recipes we’ve ever had. You can find a few of our favorites below.

For us, the best crostini recipes combine flavors to create one delicious bite. The Blackberry Goat Cheese Crostini recipe from Life As A Strawberry did just that. 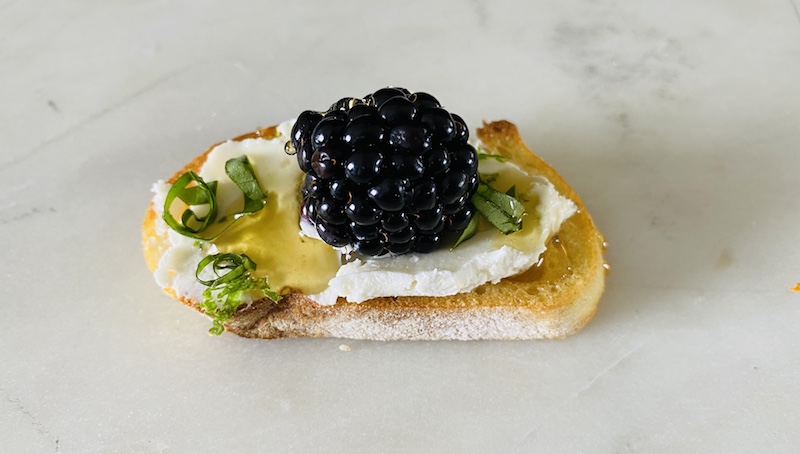 This crostini started with a mixture of goat cheese and cream cheese. Then we topped it with a blackberry, rosemary-infused honey, lime zest, and fresh basil. Get the full recipe HERE.

We’d never heard of roasting grapes before making this recipe. That said, we’re so glad we tried this one from Chris at Shared Appetite. We put this flavor-packed crostini together quickly and easily. 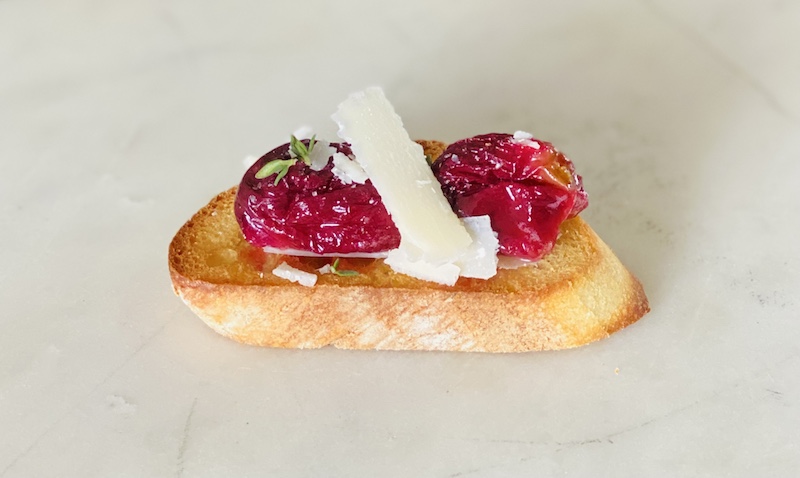 The roasted grapes paired well with our red wine and the sprinkle of thyme made all the difference. This recipe starts with freshly shaved parmesan cheese. Then, we topped the crostini with roasted red grapes, more parmesan, and just a pinch of fresh thyme. See the complete recipe and learn how to roast grapes HERE.

The Charming Detroiter introduced us to this flavor-packed crostini that features a crispy slice of prosciutto. Say no more, right? 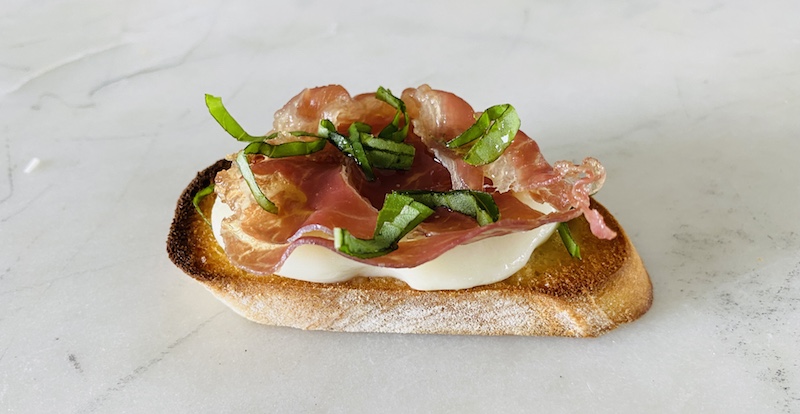 One of the best crostini recipes we’ve found, it starts with burrata cheese (or you can use fresh mozzarella). Next, top the cheese with crispy prosciutto, lemon infused honey, and then garnish with microgreens or fresh basil. Find the complete recipe HERE.

This crostini would be a perfect summer appetizer or snack. Begin with a layer of ricotta cheese then top with balsamic strawberries. I love that this recipe adds a hint of black pepper to give it a sweet, but somewhat savory taste. 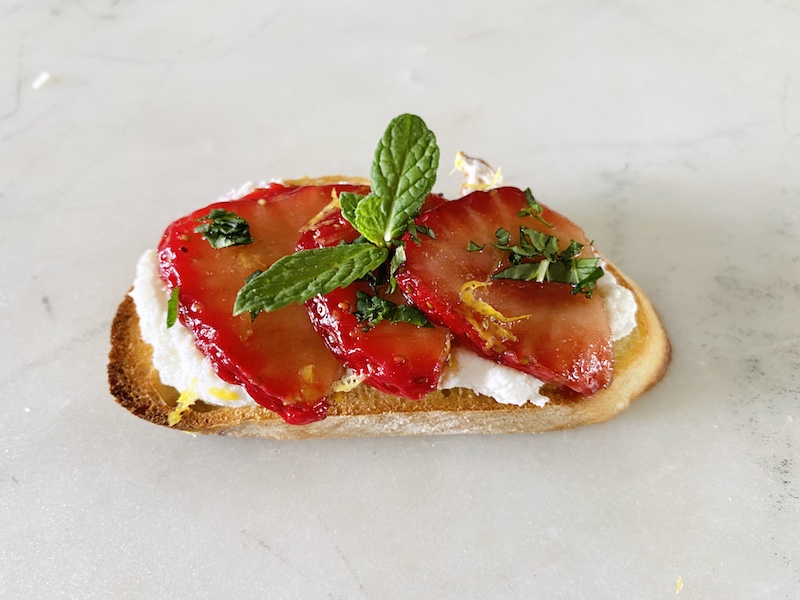 The crostini is then garnished with lemon zest and fresh mint. We found this recipe on a blog called Yay For Food. You can find the complete recipe HERE.

These last two recipes were found on the Hy-Vee website. We’ve partnered with Hy-Vee in the past on sponsored posts, but this is not one of them. We’re sharing this recipe for Brie and Fig Crostini with Toasted Pine Nuts because it is one of our favorites. 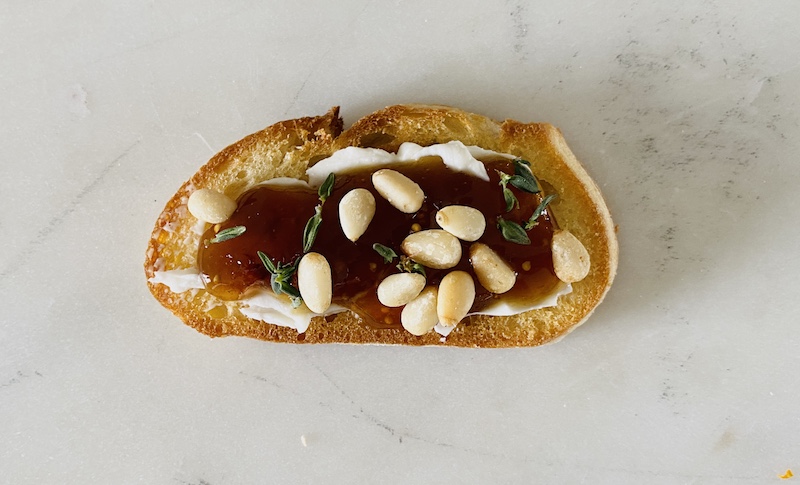 The recipe, which you can view and print HERE, calls for Brie cheese and fresh figs. Since figs are typically seasonal and only available in the summer and fall, we substituted them with a fig spread, which was also delicious. What makes this one of the best crostini recipes we’ve tried are the toasted pine nuts on top. They add a savory flavor and just the right amount of crunchy texture to take this recipe over the top.

While we made this crostini for Valentine’s Day, it would also be a great addition to your Christmas charcuterie board. It’s definitely eye-catching and also delicious. 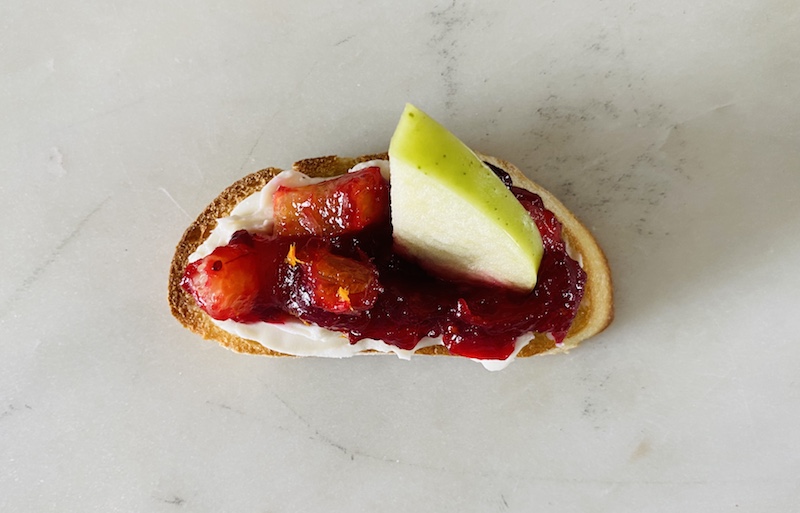 This Brie and Cranberry Crostini begins with brie. Then you top it with cranberry relish mixed with finely chopped orange. Garnished with orange rind and a green apple slice, this sweet crostini is a real treat.

Any of these crostini recipes are sure to impress your family or your guests.  And if you include one or more of them with a charcuterie board, like this one, you’ll really impress.

We also created a video for Hy-Vee where you can watch us assemble all six of these crostini. Just CLICK ON THE VIDEO BELOW.