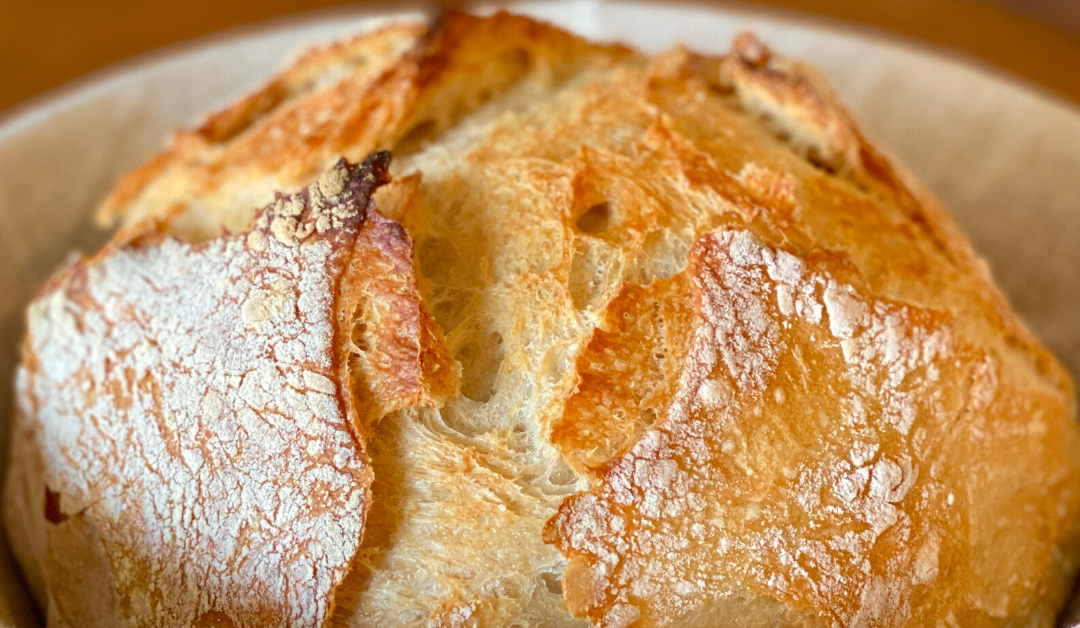 Y’all, fancy artisan bread that will impress guests is easy to make. I’d never dreamed of baking a loaf of bread like this until I saw a beautiful loaf baked by our friend Bill Clevlen of Bill on the Road. I immediately messaged him and asked for the recipe. He pointed me to a recipe on the website It’s Always Autumn, which is full of great DIY/craft/cooking ideas. I tried the recipe, and it was FANTASTIC!

Artisan bread is easy to make

The recipe calls for only four ingredients: flour, salt, water, and yeast. You just mix them up, then let the dough sit for the better part of a day. Near the end of the process you shape it, score it (which is just a fancy way of saying you make a little cut in the top), and bake it. No kneading, no folding, no stretching, and best of all, no worries. But in the end, you’ll have delicious, crusty artisan bread that will impress. (Note: this post contains affiliate links. As Amazon influencers, we earn from qualifying purchases.) 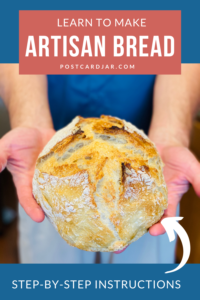 Ingredients for artisan bread that will impress 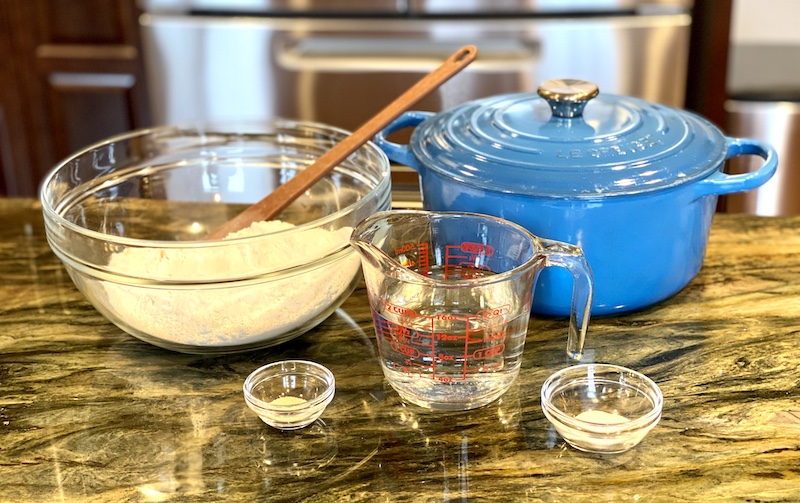 And that’s it. Seriously. That’s all you need.

First, mix all the ingredients

Put 3 cups of flour in a glass bowl. Next, add the yeast and the salt, and give it a little stir to mix it up. Honestly, I don’t know if you need to do this but I like to, so whatever.

Add the water (check the yeast instructions for the best temperature for the water). Stir with a wooden spoon until it’s well mixed, then cover the bowl in plastic wrap. 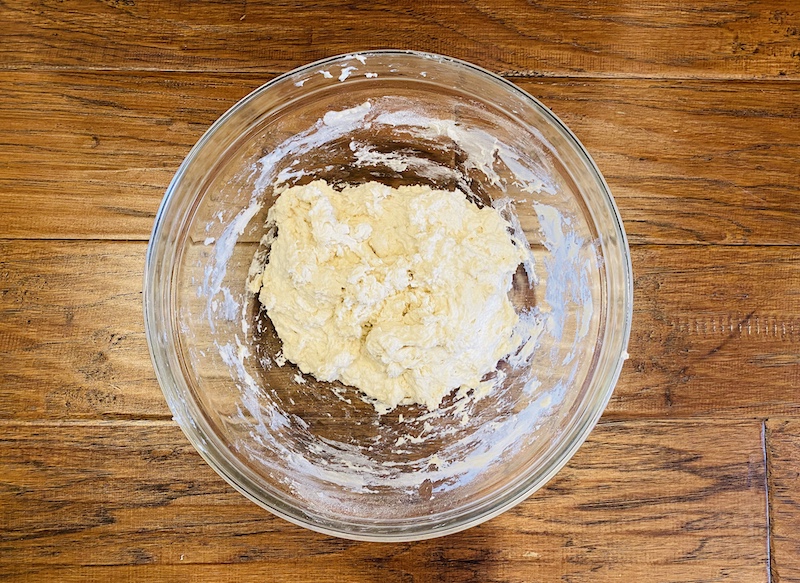 Leave it on your counter and walk away. Go to the store. Head to work. Slip away for an overnight. It really doesn’t matter. What does matter is that the dough needs to rest on your counter in that bowl for at least eight hours. But if you can’t get back to it in eight hours, that’s not a big deal as it can sit there quite happily for up to 24 hours and still come out just fine. I’ve been known to mix it up one night and not bake it until dinnertime the next. By the end of the rest period, it will look something like this: 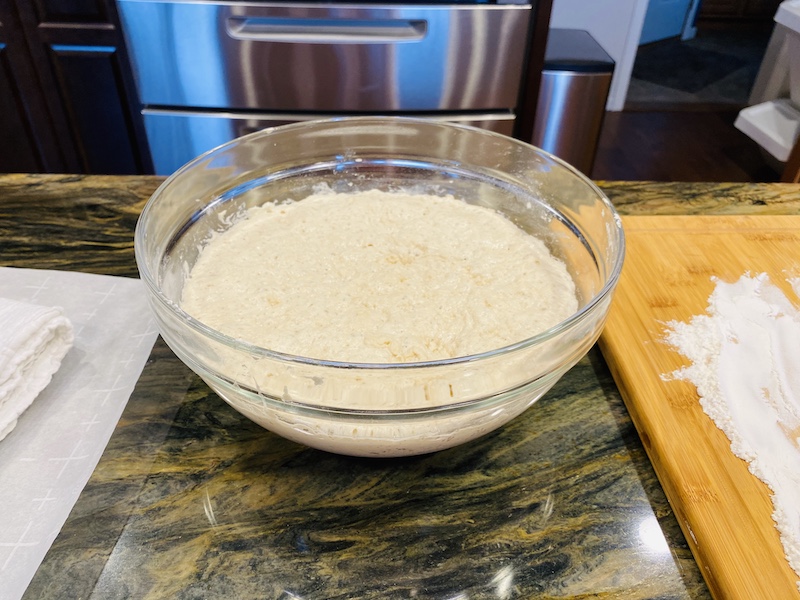 Baking artisan bread that will impress

A couple of hours before you want to serve bread that will impress, pour it out of the bowl onto a very well floured surface as the dough will be sticky. Using well-floured hands, pull up the edges so that it forms a ball. 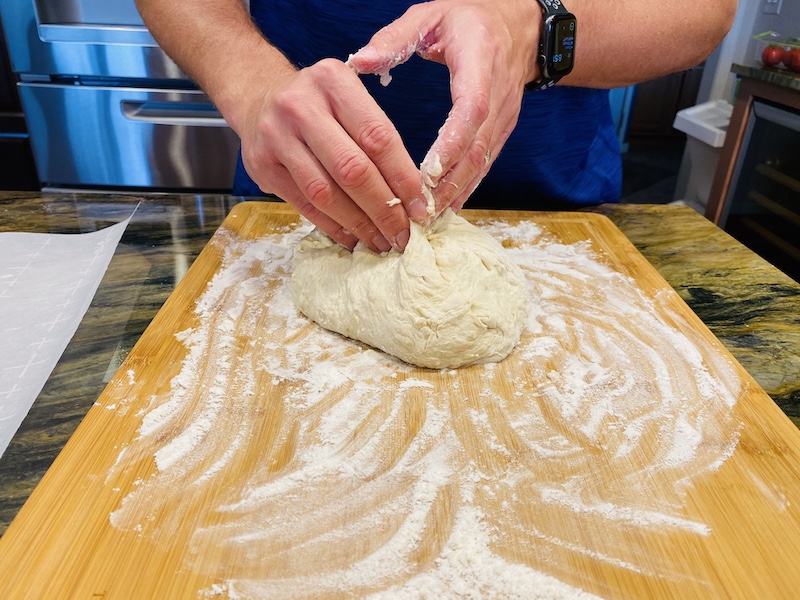 Then, flip the dough over so the smooth side is up, and then put the ball in the middle of a piece of parchment paper. 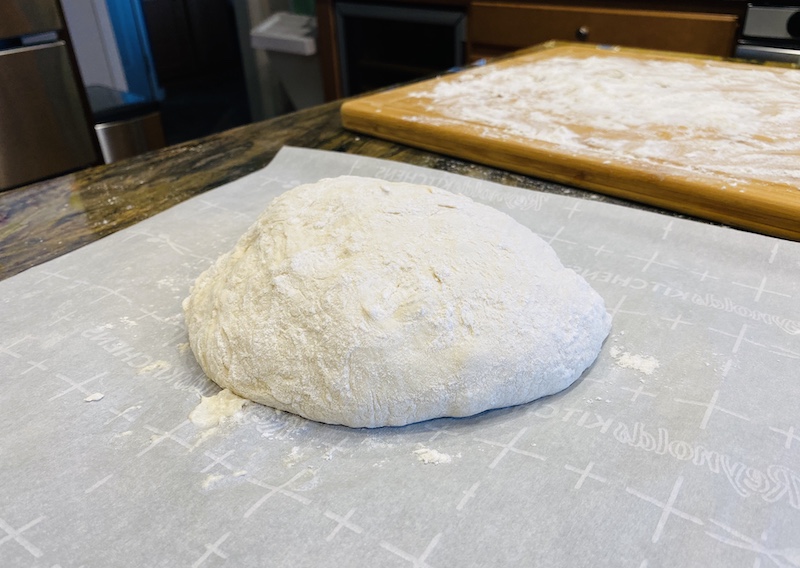 Cover the dough with a cotton tea towel and let it rest for 30 minutes. 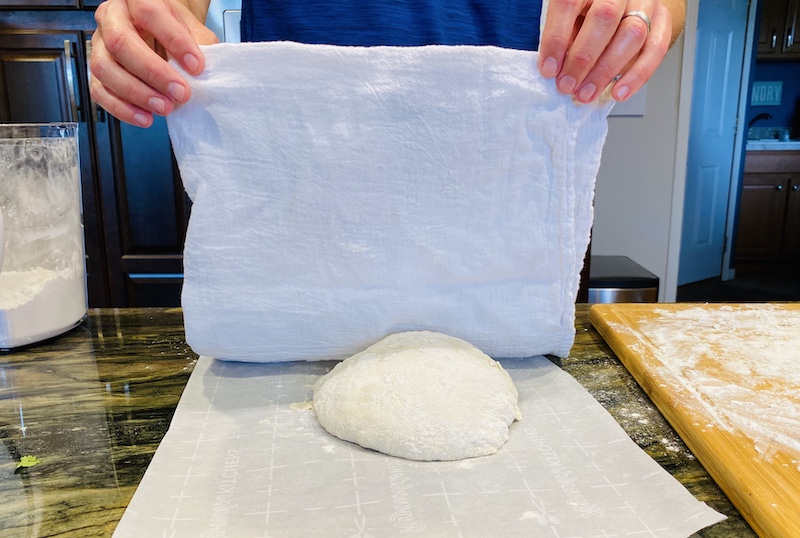 During this time, preheat your oven to 450 F. Put a dutch oven baking dish (if you need one click [HERE] or [HERE]) into the oven to preheat, as well.

After the dough has rested, lift the parchment paper by the corners along with the bread dough, and set it gently into the now hot dutch oven. 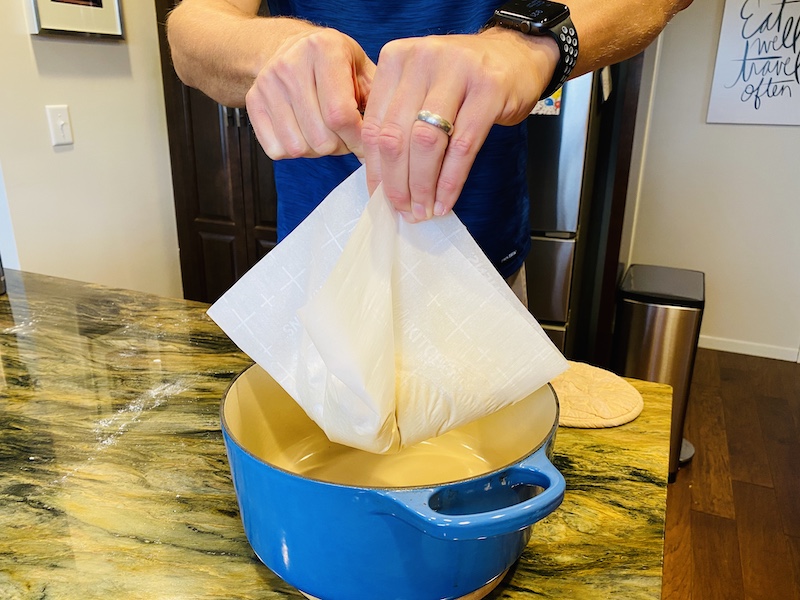 Next, score the top of the dough by cutting a cross into the top (about 1/2 to 3/4 inch deep) with a very sharp knife or clean razor blade. 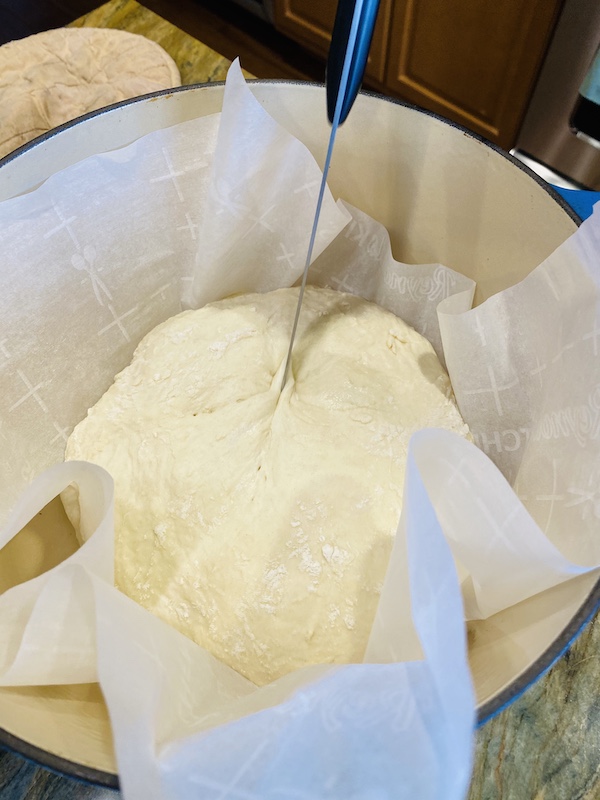 Then cover the dutch oven and place it back into the oven. Bake for 30 minutes. Remove the lid, and bake another 15 minutes, then take it out of the oven (OMG, just look at this bread!) 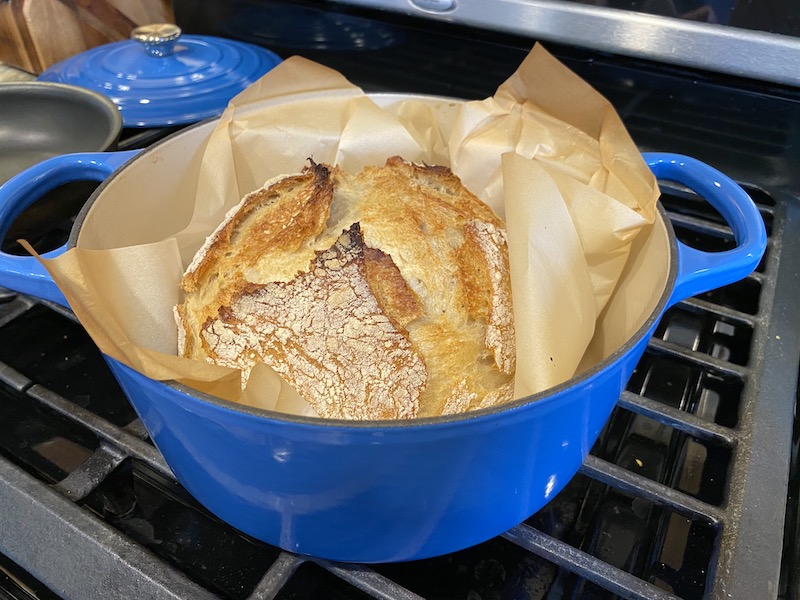 Lift the parchment paper and bread out of the dutch oven and put the bread on a wire rack to cool before slicing. 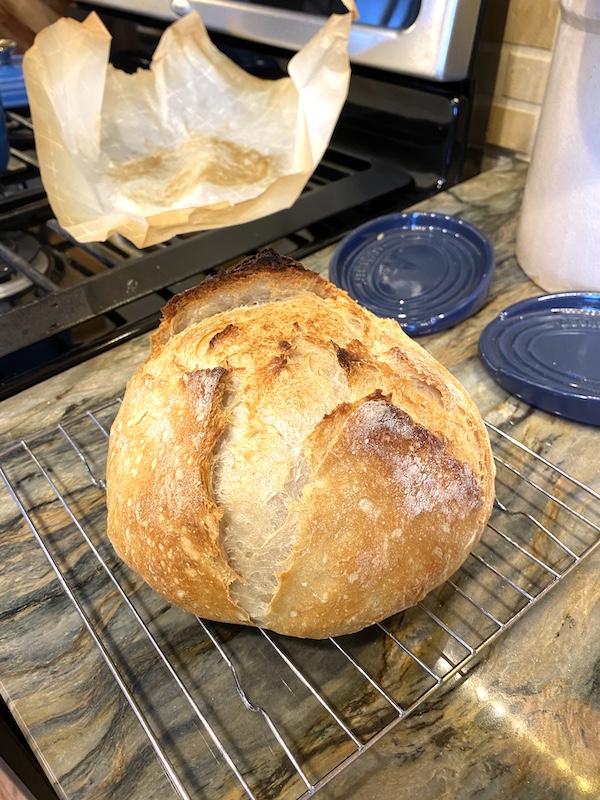 This bread is super versatile. Serve it up at a dinner party and your guests will think you’re a rock-star baker. I mean, who isn’t bowled over by fresh bread warm from the oven? It’s great with butter, but we also like it dipped in olive oil into which we sprinkle a spice mixture like Gardenaire’s “Under the Tuscan Sun” from Figue in Rochester, Minn. 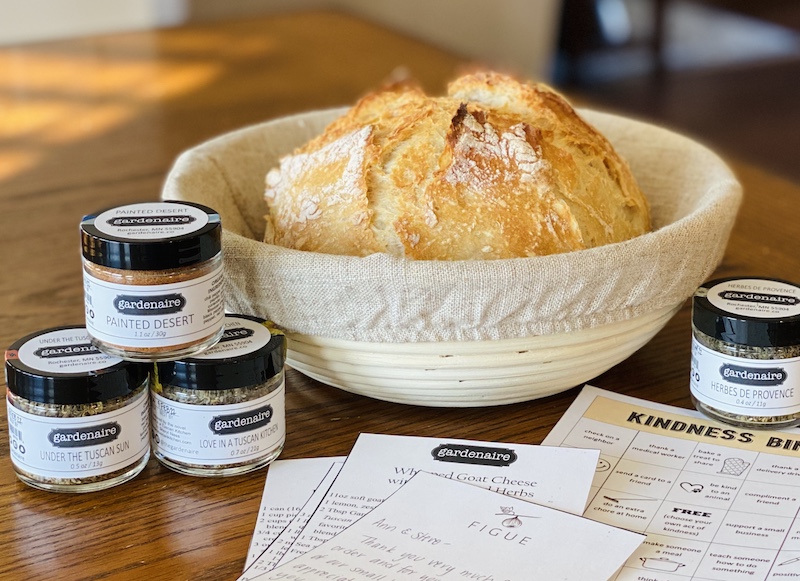 This bread is also wonderful the next morning as French toast or simply toasted with a little peanut butter, or jam, (or both!). I hope you enjoy this recipe. If you bake this artisan bread at home, we’d love to see it. Just tag us on social media @postcardjar.