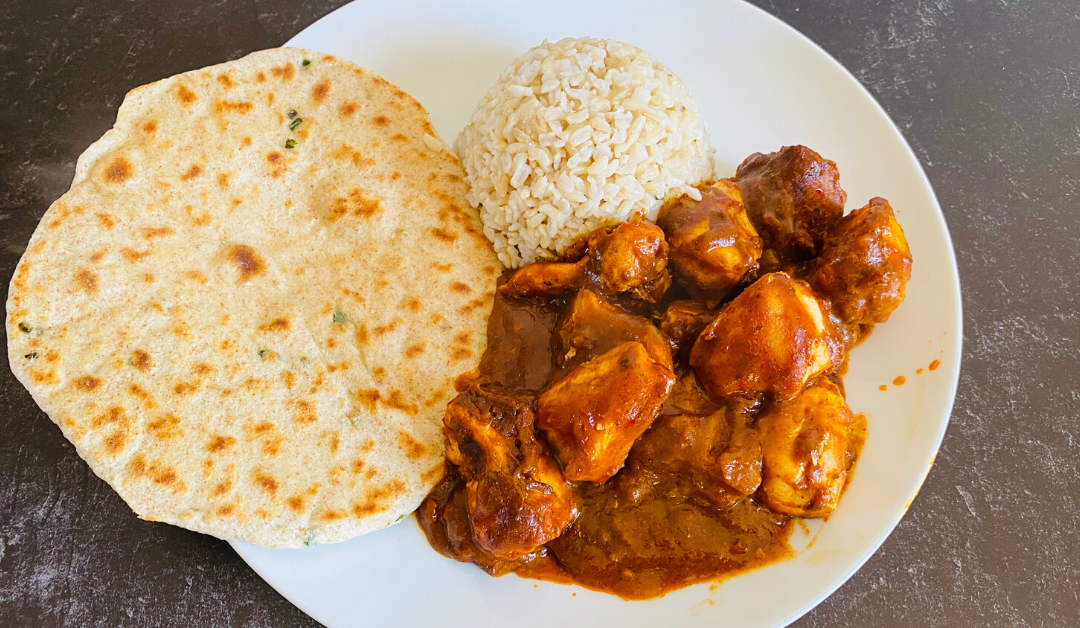 I started making roti flatbread early in the pandemic and home isolation when our craving for Indian food reached a fever pitch. We missed the warm, soft flatbread we’d had at Indian restaurants so much that one day in desperation I Googled how to prepare it. I found this recipe for making roti flatbread on a website called The Spruce Eats, and was able to whip up a batch that night. We loved it, and have made it several times since. Note that when I’m cooking for just Ann and me, I typically cut the recipe in half and it makes 4-5 pieces.

The recipe calls for self-rising flour. While we didn’t have any on hand, that wasn’t a problem. I learned how to whip some up from Taste of Home. All you have to do is thoroughly mix 2 cups all purpose flour, 3 tsp. baking powder, and 1/2 tsp. salt. (Obviously, for this recipe, you’ll want to double or triple the self-rising flour recipe). We like to substitute some of the all purpose flour for whole wheat flour (optional), so we included that in the picture, as well. 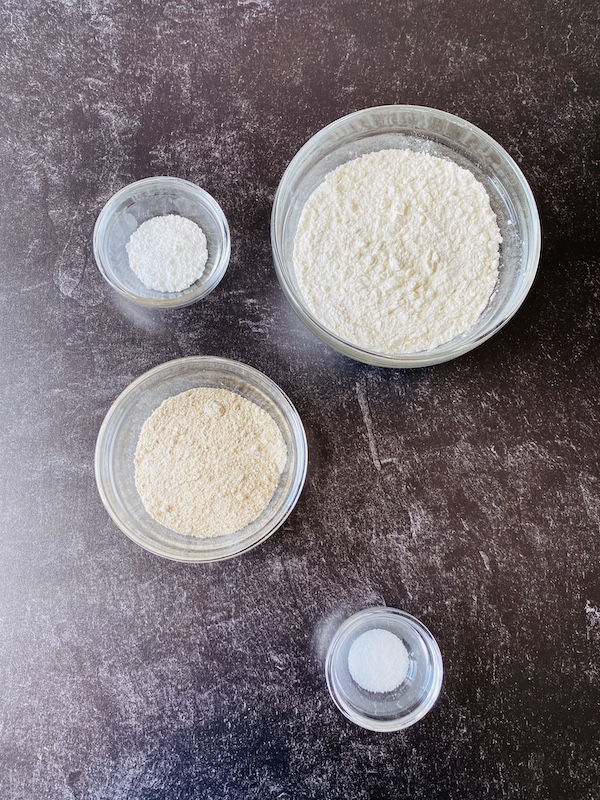 This simple recipe for making roti flatbread calls for only four ingredients: 2 1/2 cups self-rising flour, vegetable oil, water, and butter (optional). If you’d like, you can also substitute 1/2 cup whole wheat flour for 1/2 cup of the self-rising flour. That’s what we like to do. 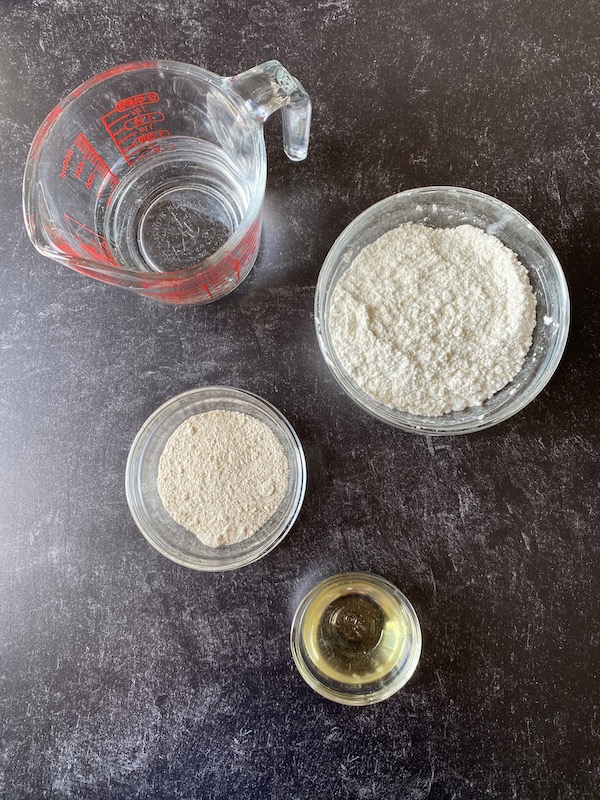 The first step in making roti flatbread is to put the flour in a bowl and stir in 2 tbsp of vegetable oil. Then, add the warm water slowly while you stir. Keep adding water until the dough forms a ball. 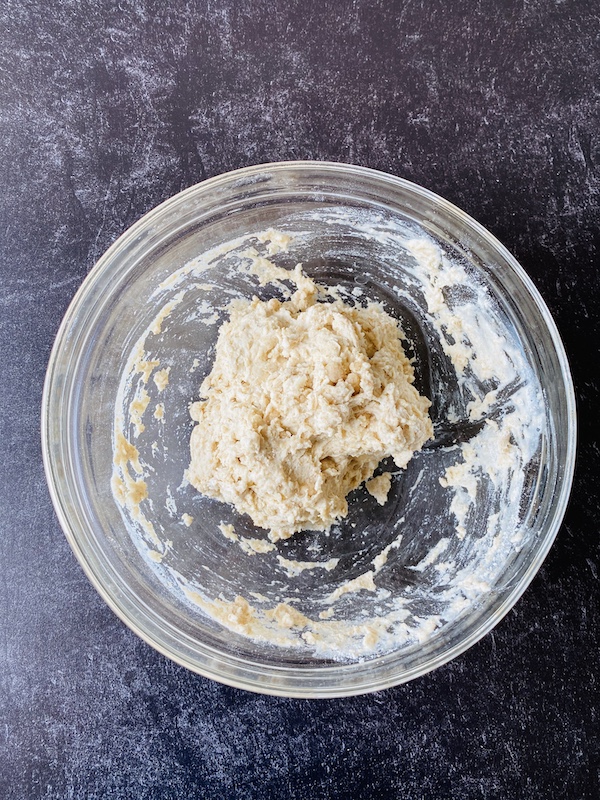 Turn out onto a lightly floured, flat surface. Cover with a damp towel and let the dough rest for 10 minutes. 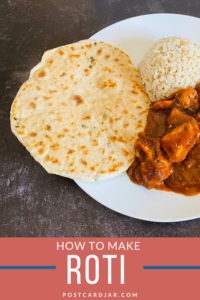 Next, roll the dough out on a lightly floured surface using a rolling pin until it is very thin. Brush 1 tsp. vegetable oil over the surface, then roll the dough up into a long tube. We forgot this photo, so we’ll add it later (oops!).

Cut the dough into 8-10 portions and cover with a damp towel. Let the dough rest an additional five minutes. During this time, heat a non-stick skillet over low-medium heat. You can also use cast-iron, but this might require a little oil.

Then, take one of the portions and roll it out as thinly as possible on a lightly floured surface. 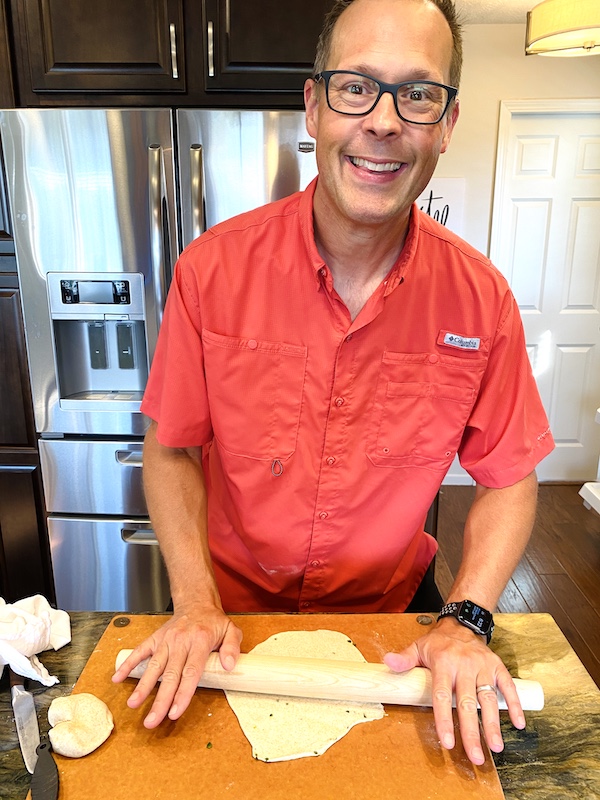 Put into the skillet and cook until there are big bubbles on the top and lovely golden-brown spots on the first side. 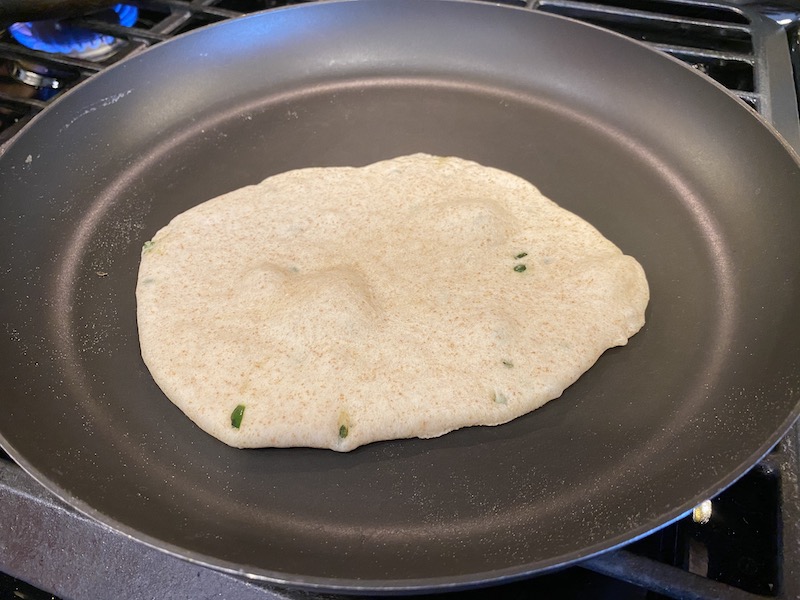 Then, flip it over to finish cooking. While one is cooking, I usually roll out the next one.

When the roti is done, you can brush it lightly with butter (optional) and then put it in a colander and cover with a damp towel until you’re ready to eat. Add each roti as you finish cooking it. Doing this helps to keep them warm and soft. Just look at the yummy finished product! 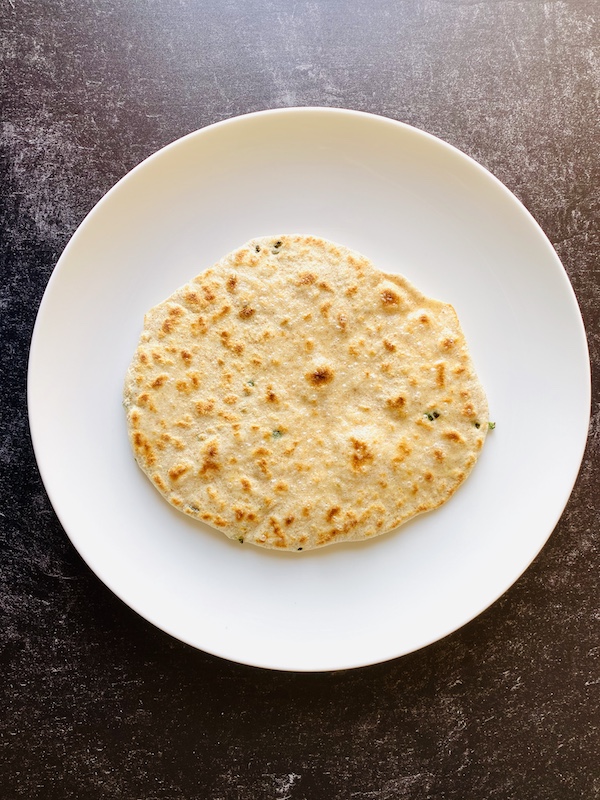 We like to serve our roti alongside a dish like chicken or shrimp vindaloo. We are not Indian cooking experts by any stretch of the imagination, but we can open a jar like this one: 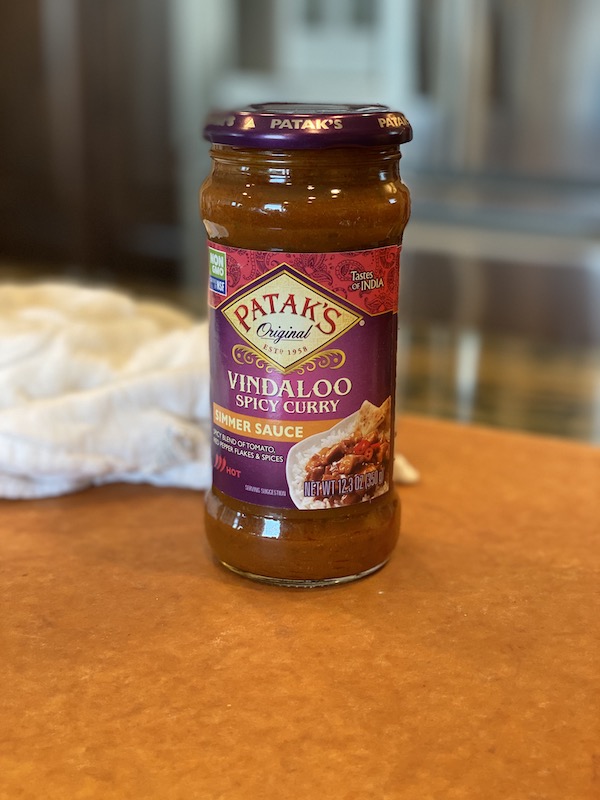 To make our dinner, first Ann cut up and boiled some potatoes in chunks. Then she browned them on all sides. Next, she browned the chicken and shrimp before adding the potatoes. Finally she added the sauce to the pan and let all the ingredients simmer for 10-15 minutes. We served it with rice and, of course, the roti. 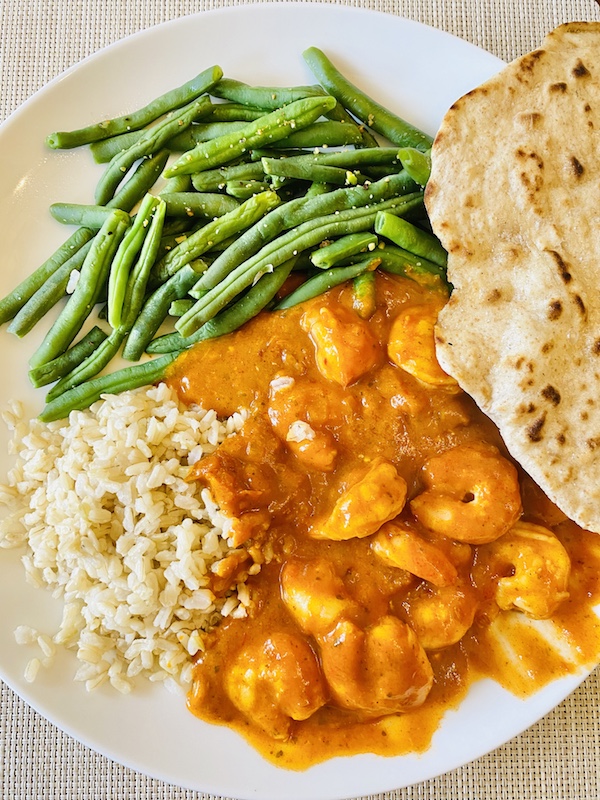 And here’s a peek at my chicken vindaloo and roti: 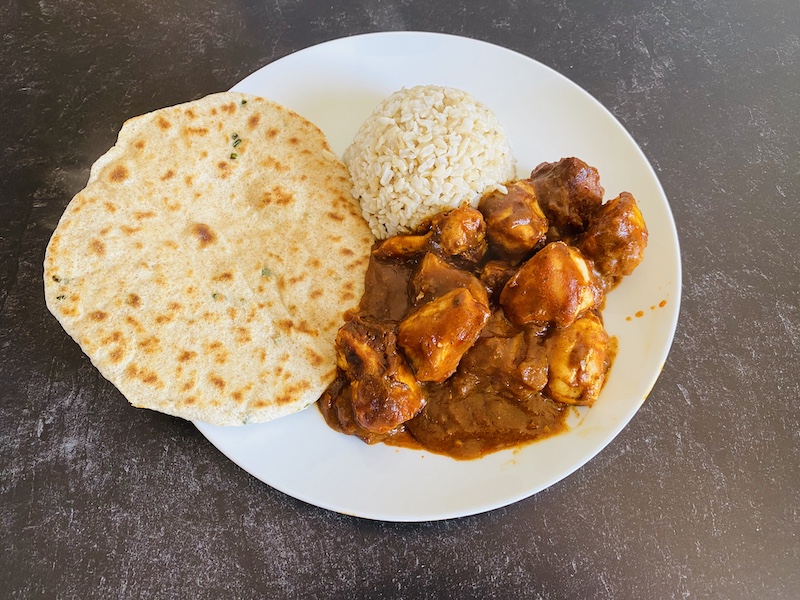 Enjoy! And, if you make this recipe, be sure to post a photo on social media and tag us @postcardjar. 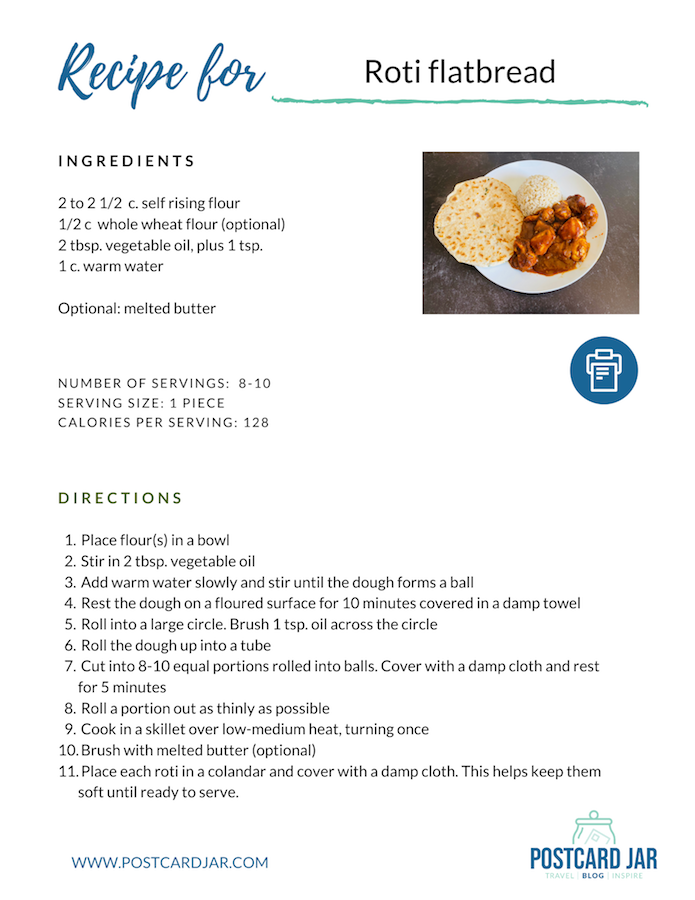