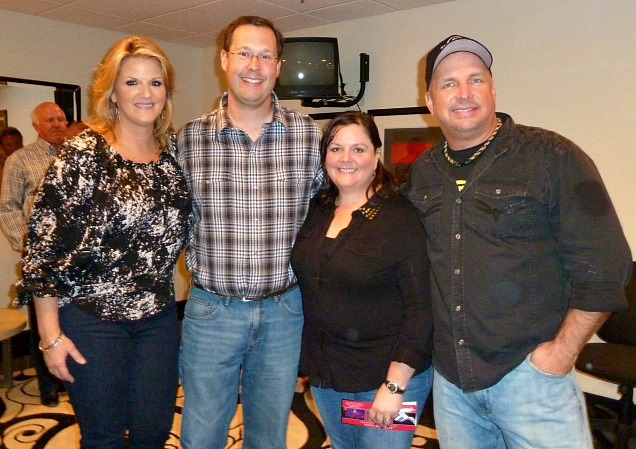 Did we ever tell you about the time we met Garth Brooks and Trisha Yearwood?

We had gone to a TeamMates mentoring program silent auction in November of 2012, and about half way through the evening, we noticed that no one had bid on a package that included tickets to Garth Brooks’ last weekend concert at the Encore in Las Vegas. Many had thought this might be his last performance weekend and having never seen him live in concert, we both were tempted to bid on the package.

The minimum bid was $400, so we placed a bid for that amount. Soon, it was up to $450, so we bid $500 and were overbid again by someone who set the mark at $550. At that amount, it was still a bargain for a night at the Encore, and two VIP tickets to the concert including back stage passes. However, we were on a budget and bidding more would have been a stretch. Oh, and did we mention that the concert was the very next Saturday and the package did not include airfare?

We left the silent auction, enjoyed the rest of the charity event, and went home.

Then, we got a call

The next day, while walking into Memorial Stadium for a Cornhusker football game, I got a call from someone at the TeamMates office. She said that our $500 bid had won the Garth Brooks package. I explained that we had clearly seen another bid for $550, but she assured me we had the winning bid and should make travel arrangements to get to the concert.

Excitedly, I called my mom from the stands and asked her to help us book plane tickets to Las Vegas for the next Saturday so we could see the concert that night. She did. And it cost us. It turns out that booking flights from Omaha to Las Vegas less than a week out, leaving on a Saturday and returning Sunday so we wouldn’t miss work was expensive.

I immediately regretted our decision to bid on this silent auction item. As much as we had both wanted to see Garth Brooks live, it was a lot of money and a lot of panicked planning.

Then, we got another call

The next morning, someone from the charity organization called us again, saying that they had mistakenly told us the wrong date for the concert. The tickets were actually for Friday night’s show, and our flight didn’t even leave until Saturday morning!!!

Thankfully, because it had been less than 24 hours since we’d booked our tickets, and because we’d booked directly through the airline (travel tip, there) we were able to cancel our tickets for a full refund. We hoped we’d both be able to get some time off of work and rebook another flight for Friday.

Steve and I each talked to our bosses the next day who both graciously allowed us to work just half a day on Friday so we could make the concert in Vegas by that night.

Monday night, we booked new tickets (this time at a significantly lower price, thank God) and were set to leave from Omaha on Friday afternoon arriving in Las Vegas in plenty of time to see the late evening concert.

Tuesday morning, we got another call.

They had made another mistake and had to let us know that there were no VIP backstage passes like they’d thought, just tickets to the concert and the one-night’s stay at the Wynn.

Now, this was just getting ridiculous. If you know me, I am a planner, and this type of change to our agenda made me want to back out. At this point, we were stuck having to take time off of work and spend hundreds of dollars for seats to a concert where we’d probably be stuck in the back row. I wanted to call the charity and back out of deal if we could.

Steve, on the other hand, is the free spirit in our house and will jump at any opportunity to visit Las Vegas. He assured me it would be OK and we should just go!

We made it to Vegas

So, on Friday at noon, we each left our offices and boarded a non-stop flight to Vegas. On our way to the airport, I was curious as to what tickets were going for to this last weekend of Garth. A quick review of an online ticket broker showed that even back row tickets were selling for as much as $2,600 each! Maybe this wasn’t such a bad deal after all.

For a quick moment, Steve suggested selling the tickets and putting it all on red, but I had always wanted to see Garth, but I suspected the investment was going to be well worth the experience. 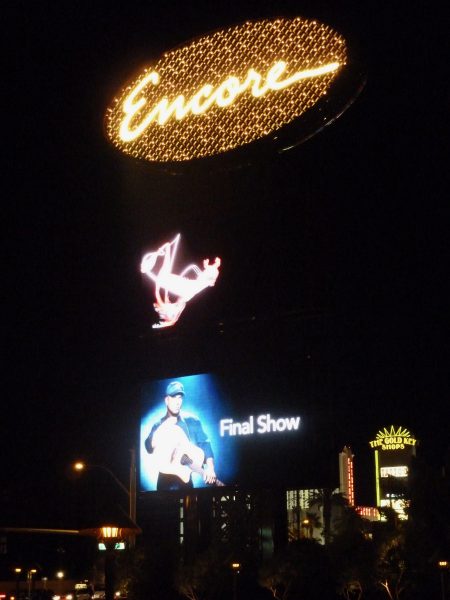 When we arrived at the hotel, we checked in and then went to will call to get our tickets, which I assumed would be less than stellar seats. The woman behind the counter handed me the envelope and said, “Wow, you’ve got great seats.”

I peeked in the envelope. They were orchestra center, row G.

Hallelujah! Things were looking up.

We checked into our hotel room, which had a beautiful view of the Las Vegas strip, and had just enough time to grab dinner before the show. 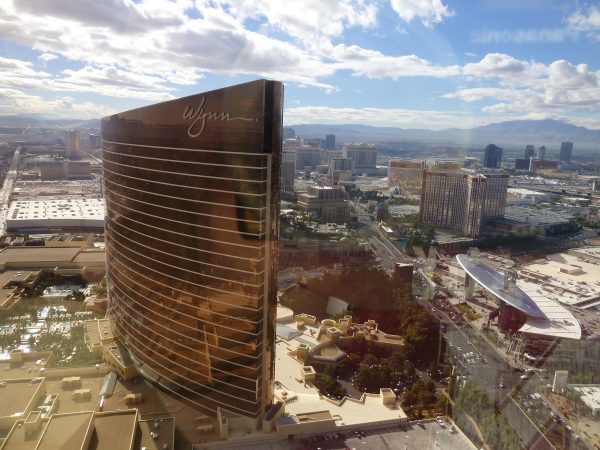 Our view from the Encore at Wynn hotel.

When it was time to go to the concert, we found our seats and struck up small talk with the people sitting around us. I told the woman next to me how excited I was to see Garth Brooks in concert for the first time, and asked if she’d ever seen him perform live. She said yes. I explained how I’d gotten off work early that day from my job at the local cable company and asked her what she did. She said, “I’m a song writer. I wrote “The River.”

It was about that time a another woman approached us and asked if we were Steve and Ann Teget. We said, “yes.” And she said (get ready for this), “Garth and Trisha would love to meet you two after the concert if you don’t mind sticking around for a bit.”

Don’t mind sticking around a bit? One look at Steve told me he was also willing to pencil it into our Vegas itinerary.

Before I could even process the two conversations that had just happened, Garth strolled out onto a mostly empty stage, grabbed his acoustic guitar, and began singing. No band, no fancy lights, just Garth and his guitar. The evening was made even more special when Garth’s wife, Trisha Yearwood, joined him on stage for a few songs. It was amazing. A once-in-a-lifetime experience.

He played all his most popular songs, pausing in between titles and sometimes verses, to tell stories behind the lyrics, or share a memory that meant something to him. He performed for several hours before ending the concert with his iconic, “Friends in Low Places” and waved goodbye to the crowd.

It was and still is the best live concert of any genre I’ve ever seen.

As others walked to the back of the concert hall to leave, Steve and I made our way to the front of the stage, along with a group of eight other people who were escorted to a room backstage.

There were four other couples, and us. All of them, far more successful and famous than we were. A professional baseball manager, a horse jockey, a song writer, and a world-famous educator and British Knight we’d seen on TedTalks. And there we were, a small-town lobbyist and a middle school principal, snacking on refreshments and trying to make conversation with people with whom we had little in common.

After a bit, Garth and Trisha joined us and announced they had no schedule for the rest of the night. They said they were happy to hang out and visit for as long as we wanted. And they did. They made their way around the room, greeting everyone, talking about the concert, their work with Habit for Humanity, and whatever else anyone wanted to visit about. 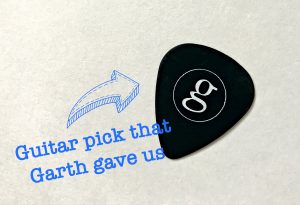 Guitar pick that Garth Brooks gave us after the concert.

At some point, it was just Steve and I visiting with Garth and Trisha like they were old college friends. I told Garth how I’d listened to his music for many years with my dad, Bob, who had died of pancreatic cancer 12 years ago that week. I said we’d always planned on going to a Garth Brooks concert together someday, but his illness changed all of that and sadly, he never got to see the country music star perform.

When I told Garth that story, and he gave me a hug. He told me about someone close to him who he’d also lost to cancer. Then, he asked me if I ever just talked to my dad in heaven. I said, yes.  Then, with an empathetic face, he said, “Next time you talk to Bob, please tell him Garth says hello.”

That’s the kind of guy Garth Brooks is. Caring, empathetic, and just an all-around great human being from what could gather in brief time together.

Garth and Trisha were both kind enough to autograph our tickets and Garth gave us a guitar pick. We snapped a few pictures with the famous couple and left them to talk with the others, who they clearly knew better than us. At about 3 a.m., we floated back to our room, lay on the bed, and looked at each other with faces that said, “Did that just really happen?”

It did. And we’ll never forget that night.